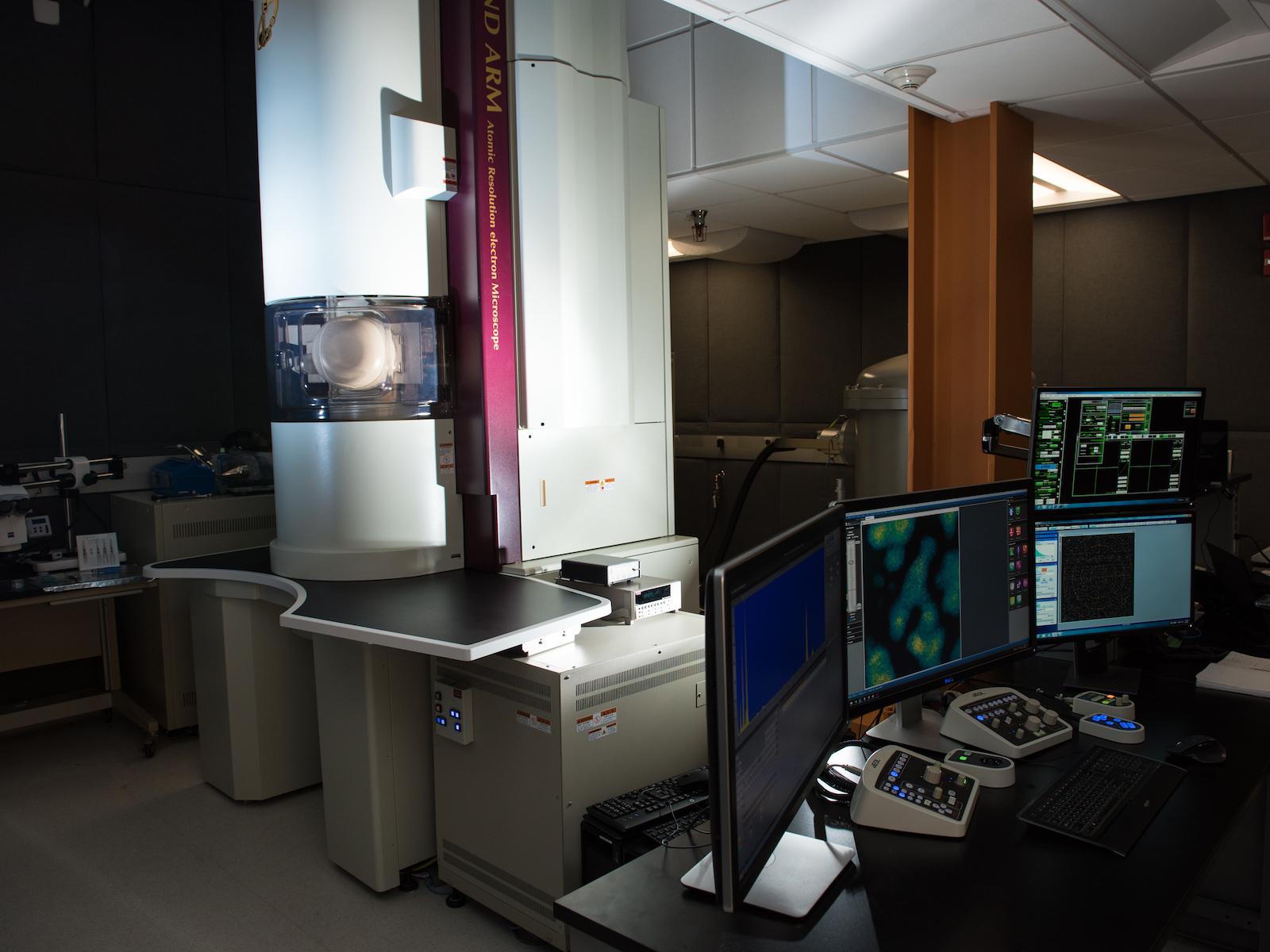 Installed in fall 2018, this world-class 300kV JEOL GrandARM-300F aberration-corrected scanning transmission electron microscope (STEM) is used for atomic-resolution imaging and mapping of composition and chemical bonding. The instrument features dual X-ray detectors, a high-speed Gatan Quantum EELS system, and a range of holders for tomography, in situ, and other experiments. Read more.

In a pioneering discovery, Nuclear Process Science Initiative (NPSI) researchers at PNNL, using a new instrument in the Radiochemical Processing Laboratory (RPL), have detected and imaged xenon in a section of cladding, or the thick outer layer of a nuclear fuel rod.

The revelation, the first observation of its kind, will provide insights into how the fission product got into the cladding during nuclear reactor operations. Such information could lead to advances in future fuel designs. Researchers are documenting the experiment in a paper that will be submitted to a scientific journal.

The discovery was an outcome of a recently-completed, three-year NPSI project, “Modeling the Interfacial Effects, Partitioning, and Production Routes of Epsilon Particles in Uranium Oxide,” led by chemist Richard Clark. The project focused on the noble metal phase (sometimes referred to as the “five-metal phase” or “epsilon phase” comprising molybdenum, technetium, ruthenium, rhodium, and palladium) which forms in irradiated fuel. The goal of the research was to better understand how this phase forms, and how it impacts the fuel’s behavior, which is information that would help fill key knowledge gaps.

As part of the project work, the team used electron microscopy to study irradiated fuel rod samples. During the studies, which focused on the interfacial zone where the fuel and cladding come together, the researchers discovered the presence not only of the five typical metals associated with the phase, but also tellurium, which was confirmed during other experimental efforts. After observing the noble metal phase particles within the cladding itself, the researchers noticed gaps surrounding the particles. The gaps suggested the presence of xenon (a decay product of tellurium) residing within bubble-like structures.

As the next step, Clark says the researchers created a thin sample of cladding that preserved a bubble and the gas inside.

With Unique Microscope, There’s No Place to Hide

Researchers introduced the radioactive fuel sample into the GrandARM scanning transmission electron microscope, recently installed in RPL and one of only three such instruments in the U.S. The microscope, part of RPL’s new Radiological Microscopy Suite (RMS), applies a 300-kiloelectron volt beam, which enables exploration of thicker regions of a specimen.

Clark says the finding was one of several key outcomes from the project. “We delivered new knowledge in several areas. As we reviewed our progress over the past three years, we found that we met many of our research objectives, which all contribute to the new knowledge and methods that NPSI continues to advance in the areas of legacy waste, nuclear security, and analytical capabilities,” Clark says.

NPSI is a five-year research effort supported by PNNL’s internal Laboratory Directed Research and Development (LDRD) funding program. The RPL is a Hazard Category II Non-Reactor Nuclear Facility and has been cited as a national landmark. Along with other PNNL assets, the RPL provides key state-of-the-art nuclear research resources of value to the nation.