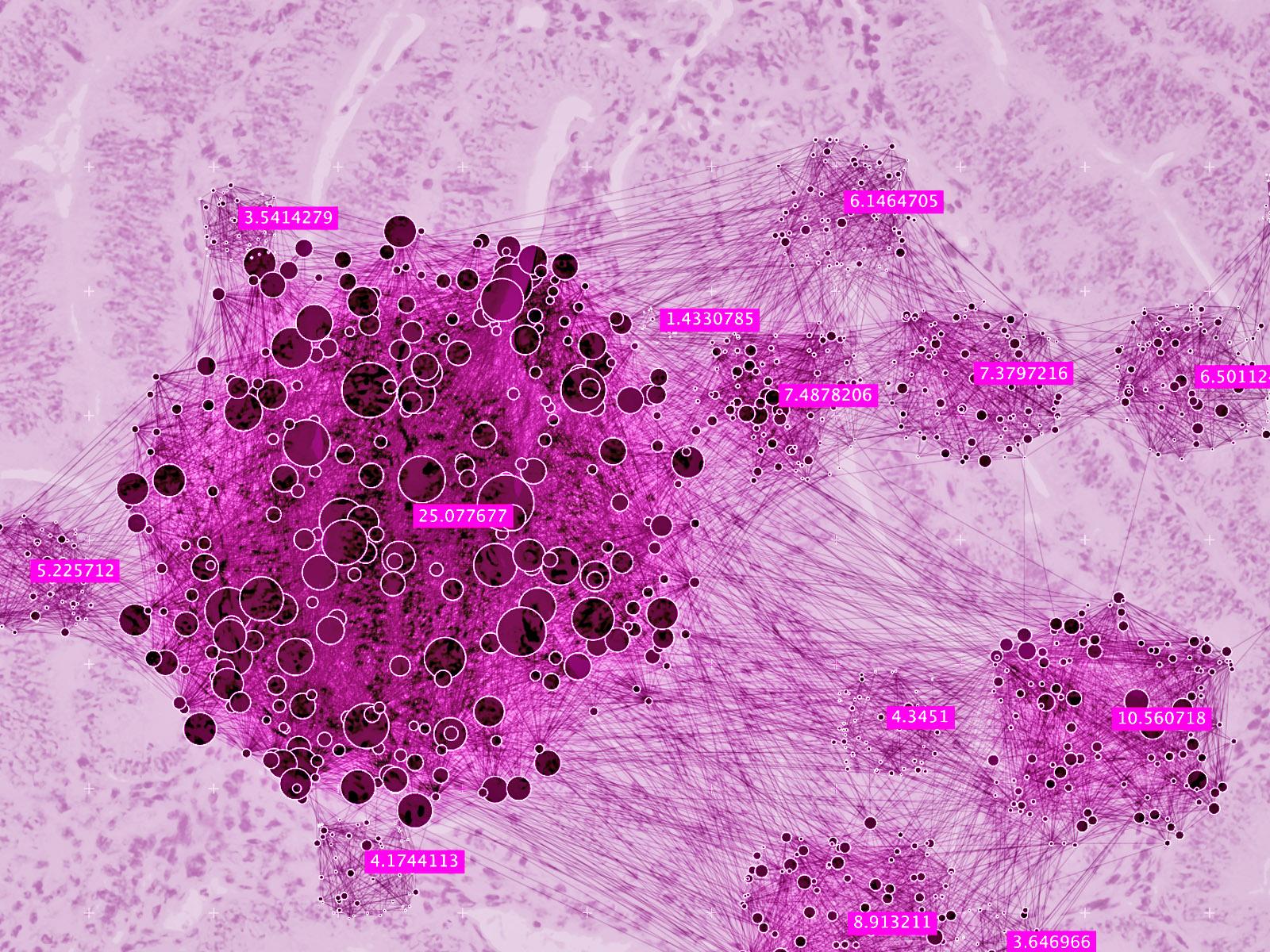 To learn more about endometrial cancer, researchers took more than 12 million measurements involving thousands of molecular actors involved in how the disease unfolds.

A study published Feb. 13 in Cell provides an unprecedented look at the dozens of molecular steps that occur to bring about endometrial cancer, commonly known as uterine cancer. The study offers insights about how physicians might be able to better identify which patients will need aggressive treatment and which won’t, and offers clues about why a common treatment is not effective with some patients.

The study, funded by the National Cancer Institute, also suggests a potential new role for already-approved drugs that target proteins known as CDK12, SMARCA4 and PML in other types of cancer.

One could say that the work is a detailed molecular snapshot of endometrial cancer. However, the information is so vast, touching upon tens of thousands of molecular actors taking part in thousands of interactions at different times, that the work is more like a frame-by-frame video, documenting steps that play out over years in patients’ bodies.

“This is like the Google Earth of endometrial cancer,” said Karin Rodland, one of five corresponding authors of the paper and a cancer biologist at the U.S. Department of Energy’s Pacific Northwest National Laboratory. “It’s a very comprehensive portrait of this particular cancer type. We tried to measure everything we possibly could. Then we searched for patterns.”

Rodland and PNNL’s Tao Liu are two of five corresponding authors of the paper; the others come from New York University School of Medicine, Washington University in St. Louis, and Baylor College of Medicine. Overall, scientists from more than a dozen institutions contributed. The senior author is David Fenyo of NYU Langone Health.

The research builds on work by The Cancer Gene Atlas, or TCGA, which identified some of the genetic underpinnings of the disease in 2013.

But genes are only the start of the story when it comes to cancer. When and where are those genes turned on, turned off, or mutated? What do they produce and how do those products interact?

The team studied 95 uterine tumors and 49 normal uterine tissue samples. Scientists measured the abundance and modifications of a dizzying array of molecular players, including genes, messenger RNAs, circular RNAs, micro RNAs and proteins. The measurements of what scientists call “post-translational modifications,” including phosphorylation and acetylation, are key to determining when and where proteins, the molecular workhorses of every cell, are active or inactive.

“This unique, rich resource of high-quality data about all these molecular players from the same set of samples provides cancer researchers with a precious view of protein activity and regulation,” said Liu.

“This is like the Google Earth of endometrial cancer”-Karin Rodland

What did they learn from the painstaking process? Here are the top takeaways.

Identifying the most aggressive endometrial cancers

Scientists developed a promising new way to identify tumors that are not currently classified as aggressive but which turn out to be just as invasive as serous tumors, which grow quickly and are more likely than other tumors to kill patients.

Right now the aggressiveness of an endometrial tumor is determined largely by viewing the cells under a microscope. The team showed that activity levels of certain proteins clearly differentiate more-aggressive from less-aggressive tumors. For example, the team showed how the protein beta-catenin, a well-known actor in many types of cancer, interacts with a signaling pathway known as Wnt to evade detection, accumulate and spur cells to grow out of control.

“What was a disciplined army of interacting proteins now becomes a mob, wreaking havoc,” said Rodland.

Unexpectedly, the team also found that a process that involves packing and unpacking genes happens more often than expected in tumor cells. There’s more than 7 feet of DNA squeezed into nearly every one of our cells, and it’s packed super efficiently, but cells need to unspool the DNA so that other molecular machinery can access it. The team’s measures indicate that a key part of the process, known as histone acetylation, is very active in endometrial cancer.

“Imagine a librarian holding a book very tight to the chest, not allowing anyone else to read it,” said Rodland. “If you want to read the book – or in this case, access a gene and turn it on – you have to have a way to loosen the librarian’s grip and open the book.”

Identifying patients who will or won’t benefit from checkpoint therapy

The team created a new way to determine which patients are most likely to benefit from a treatment known as checkpoint therapy, where drugs like pembrolizumab and nivolumab are used to dodge the barriers that some cancer cells use to evade the immune system. It’s one of many ways that physicians are exploring the use of immunotherapy to spur the body’s natural defenses to fight cancer.

Currently in endometrial cancer, physicians use a measurement known as tumor mutation burden to determine which patients are most likely to benefit. Based on the measurements of immune activity in this study, the scientists have proposed a new measure focused on a patient’s antigen presentation machinery, known as the APM. The APM describes how well the body flags cancer cells and presents them to the body’s immune system for destruction – a key function for checkpoint inhibitors to be effective.

Better insight into exactly who would benefit from the drugs would allow physicians to avoid their use in patients who are unlikely to benefit, sparing those patients severe and unnecessary side effects.

“This work contributes to the personalized medicine we need to deliver for patients who have endometrial cancer,” said Bing Zhang of Baylor College of Medicine, a corresponding author. “Such work will help us to know which patients will benefit most from which therapies.”

The team also discovered that small, oft-overlooked molecules known as circular RNAs seem to be involved in the transformation that cells undergo when they gain the ability to spread. The transition is called the endothelial-mesenchymal transition, or EMT; it’s what makes endometrial cancer deadly.

The study is the fifth publication in a series of studies funded by the National Cancer Institute’s Clinical Proteomic Tumor Analysis Consortium to tackle the biological pathways involved in cancer. Previously published papers have focused on ovarian cancer and colon cancer.

“This is hypothesis-generating research,” said Rodland. “It’s like the Moon mission, where the crew brought back rocks for study by many other scientists. Here, we are providing the raw information for scores of scientists to pore over, to study, and to generate new hypotheses. Eventually we hope this information will lead to clinical trials and perhaps new ways to treat this disease.”

This work was supported by grants U24CA210955, U24CA210954, U24CA210972, U24CA210979, ​U24CA210986 and U01CA214125​ from the National Cancer Institute’s Clinical Proteomic Tumor Analysis Consortium, by grant RR160027 from the Cancer Prevention & Research Institutes of Texas, and by funding from the McNair Medical Institute at the Robert and Janice McNair Foundation. Proteins and protein activity were measured at EMSL, the Environmental Molecular Sciences Laboratory, a DOE Office of Science user facility located at PNNL.

Pacific Northwest National Laboratory draws on signature capabilities in chemistry, Earth sciences and data analytics to advance scientific discovery and create solutions to the nation's toughest challenges in energy resiliency and national security. Founded in 1965, PNNL is operated by Battelle for the U.S. Department of Energy's Office of Science. DOE's Office of Science is the single largest supporter of basic research in the physical sciences in the United States and is working to address some of the most pressing challenges of our time. For more information, visit PNNL's News Center. Follow us on Facebook, Instagram, LinkedIn and Twitter