How Colon Cancer Unfolds in the Body 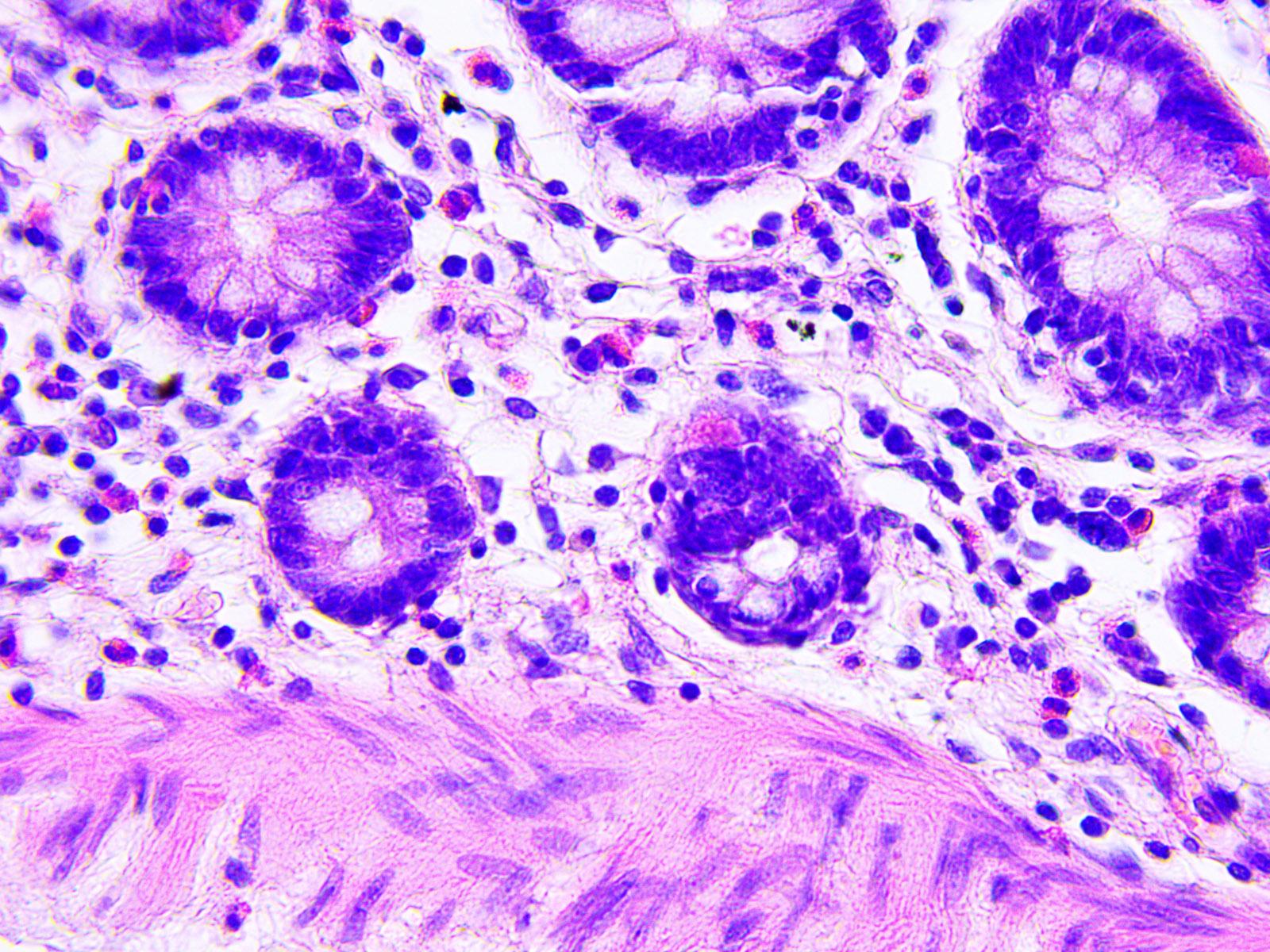 Cells involved in colon cancer, the second-leading cause of cancer deaths in the United States.

PNNL scientists and colleagues have taken one of the most in-depth looks ever at the riot of protein activity that underlies colon cancer and have identified potential new molecular targets to try to stop the disease.

The research team, led by corresponding authors Tao Liu and Karin Rodland of PNNL along with colleagues at Baylor College of Medicine, Vanderbilt University, the National Cancer Institute and others, published their results April 25 in the journal Cell. The scientists work together as part of the National Cancer Institute Clinical Proteomic Tumor Analysis Consortium (CPTAC).

“We were able to not only confirm previously described colon cancer molecular markers but also to uncover new differences between proteins produced by tumors and normal tissue that may be worth further study,” said corresponding author Bing Zhang, professor of molecular and human genetics at the Lester and Sue Smith Breast Center at Baylor.

Scientists have made tremendous strides untangling the genetic roots of cancer. But the activity of the proteins—the workhorses which usually implement the biological programs traced out in the genes—has been a daunting effort for scientists to tackle. The research provides a new window into cancer, uncovering long-hidden information spurring new questions and possibly leading to new avenues for treatment.

“Analysis of the genes tells us what might possibly go wrong. But we don’t know exactly what has gone wrong until we analyze the proteins,” said Liu, senior scientist in the Integrative Omics Group at PNNL.

An army of molecular machines

The team looked at more than 50,000 protein-altering events, focusing largely on a set of about 8,000 proteins that are regulated by molecules called kinases through a process known as phosphorylation. Kinases form an army of tiny molecular machines that control protein activity, determining which proteins are turned on, when and where, and for how long. Kinases act quickly, bestowing a nimbleness to the molecular activities that make life possible.

The team analyzed genes and proteins in the tissues of patients with colon cancer, comparing tissue affected by cancer to tissue directly adjacent that didn’t have cancer cells. The team didn’t just measure levels of proteins; it measured levels of protein activity.

The study produced some surprises. For instance, a protein known as retinoblastoma (RB) has long been considered mainly a cancer suppressor. But the team’s findings indicate that the protein might, in colon cancer, spur cancer. The team found that in colon cancer, the protein is modified so that body tissue has less “programmed cell death.” In other words, cells don’t die like they usually do—cells live longer, in effect running amok, a hallmark of cancer.

While RB has been known to be active in colon cancer, this new information about the molecular switches that control its activity help pinpoint its function. The findings indicate that scientists might do well to try to ramp down the activity of the modified RB protein by targeting a protein known as CDK, which turns it on.

Another finding focuses on a process known as glycolysis, which describes how cells create energy for themselves. The team found evidence that the process has gone awry in a subtype of colon tumors that are especially resistant to treatment, known as MSI-high tumors. The work helps explain why such tumors are notoriously resistant to certain immune drugs and why the tumors have fewer immune cells known as CD8 T-cells. The finding raises the possibility of a new approach to these tough-to-treat tumors: starving the tumors and cutting off their ability to produce energy.

“Our data revealed a surprising relationship between enzymes of metabolism and immune cells in some colon tumors, which presents a new opportunity to improve immunotherapies,” said co-author Daniel Liebler, professor of biochemistry at Vanderbilt.

Through CPTAC, the PNNL team has also made important strides extending our knowledge about ovarian cancer. That research, published in 2016, identified some of the biological factors at work in the most malignant form of the disease. The studies are part of PNNL’s continued role working with officials at NIH and other institutions to tap the power of proteogenomics to benefit cancer patients.

This work was funded by grants U24CA159988, U24CA210954, U24CA160019, and 24CA210955 from the National Cancer Institute Clinical Proteomic Tumor Analysis Consortium, by grant CPRIT RR160027 from the Cancer Prevention & Research Institutes of Texas, and the McNair Medical Institute at the Robert and Janice McNair Foundation. The precision protein measurements were done at EMSL, the Environmental Molecular Sciences Laboratory, a Department of Energy Office of Science user facility located on the PNNL campus.