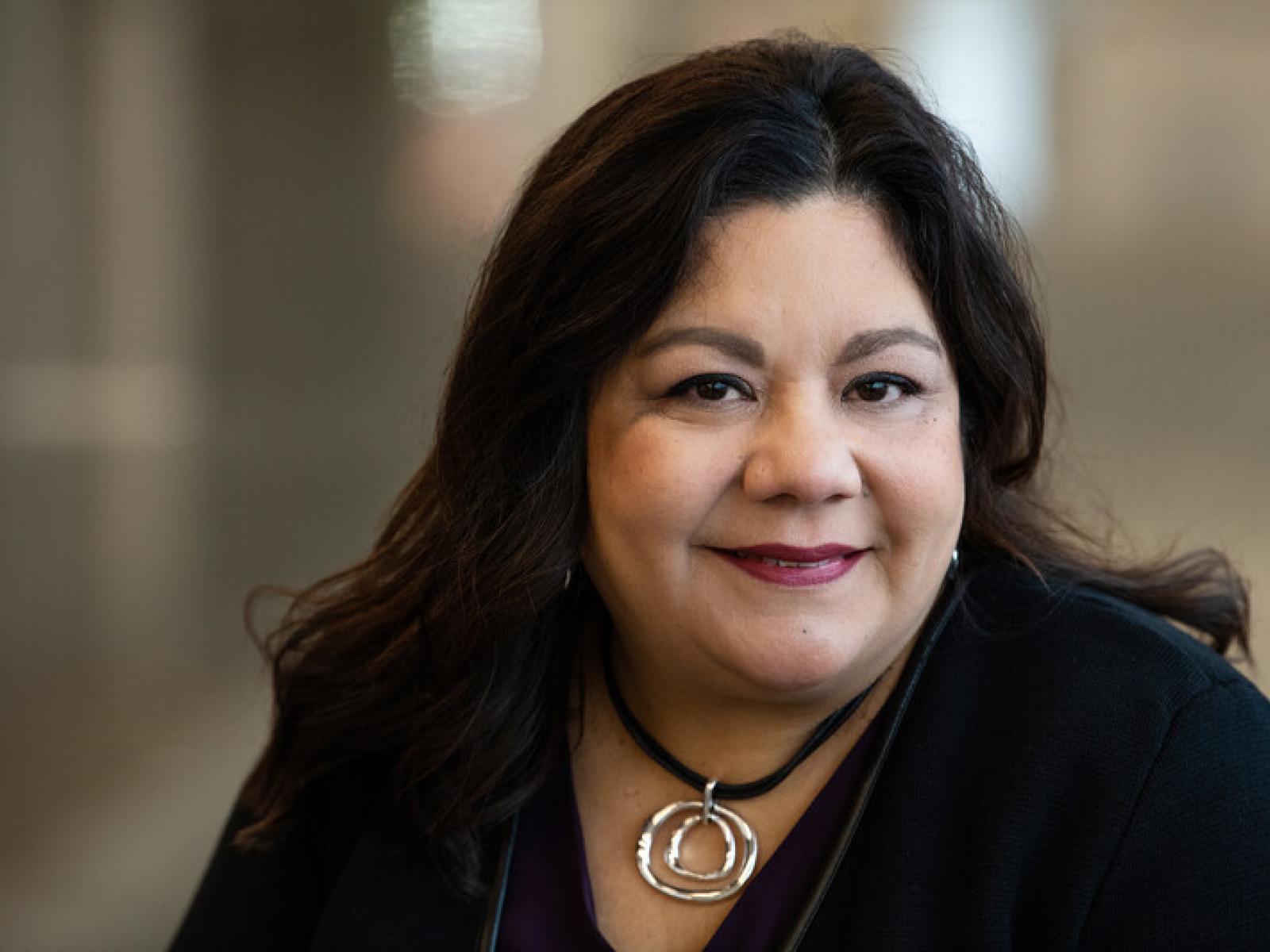 Evangelina Galvan Shreeve, head of PNNL's STEM education efforts, was recently honored by LATINA Style magazine as one of 10 finalists for the top Latina corporate executive of 2019.

Evangelina Galvan Shreeve, the daughter of Mexican farmworkers, is now the director of science, technology, engineering, and mathematics (STEM) education at Pacific Northwest National Laboratory (PNNL, or the Lab).

On February 12, she was recognized by LATINA Style magazine as one of 10 finalists for the top Latina corporate executive of 2019.

Shreeve, the only honoree from a national laboratory, joined other finalists recognized during the February 11–12, 2020, Latina Style 50 Awards and Diversity Leaders Conference in Washington, D.C.

“I am humbled,” said Shreeve of the honor. “It’s good for PNNL. I really don’t like the attention for me. I’ve never wanted anything to be about me. It’s about the impact we have in the community.”

Shreeve reflected that “my work has always been about being a public servant. I wanted to lead and be engaged in something that wasn’t only going to be for profit. I wanted to have an impact on the community and the world I lived in.”

Shreeve calls her life so far “my fortunate journey.”

It has taken her from a community of migrant workers where she picked grapes and apples every summer, to the University of Washington (B.A. in psychology, 1984; M.A. in public administration, 1993), and finally to an executive job at what she called “one of the nation’s premier science research laboratories.”

That journey started with the fervor that her parents had for education in a household where hard work was expected and any question and opportunity to learn was welcome.

“My parents ignited curiosity in us,” said Shreeve.

Her father and mother, with an instinct for what is right, defied what were then the norms of childrearing in Mexican-American households. They encouraged Shreeve―their eldest daughter and the first in the family to graduate from high school and then college―to break cultural and gender boundaries to explore the world and its possibilities.

Shreeve recalled her social daring as a child, beginning with learning English as a 6-year-old in “just a few short weeks,” joining the Blue Birds (the onetime junior version of the Camp Fire Girls) in second grade (“it was a milestone in my family,” she said), and going on to leadership roles in school government, athletics, and high school cheerleading.

To pay for her cheerleading uniform, Shreeve pruned grapevines for two weeks.

“Here I am,” she said, decades after her formative years on the edge of poverty. “Anything is possible.”

Shreeve lives in Prosser, Washington, not far from Rainbow Court, a migrant camp of tiny houses and converted Quonset huts where she spent her first six years. (After that, her parents had enough money to buy a house). Most of the little houses had just one bedroom.

“My world was very small,” said Shreeve―“and very happy,” leavened with loving parents, four younger siblings, and a life that revolved around work, school, and church.

The nearby Tri-Cities, which had a population of about 90,000 when Shreeve was growing up, “was like Oz,” she said―a place of infrequent, thrilling visits. “And I certainly didn’t know about the Lab,” which is one of 10 national laboratories funded by the Office of Science at the U.S. Department of Energy (DOE).

The University of Washington was similarly exotic to the young Shreeve when she arrived as a freshman in 1984. Her first class, an introduction to psychology, had 800 students in it―“more than my whole high school,” said Shreeve.

“Things happen for a reason,” said Shreeve of the big-city university that widened her universe and instilled in her an urge to serve those who could grasp the same advantages with the right guidance. “My world kept growing and growing the more I learned.”

Looking back, she might have turned a high school love for chemistry into a STEM degree. “But I lacked the guidance,” said Shreeve―the kind she provides today as a STEM executive, and the kind she has lavished on her own children.

Shreeves’ husband Brad is a school administrator. Their daughters are both at the University of Washington.

Cameron Rose, a senior majoring in speech and hearing sciences, graduates in June and is researching graduate school programs. Emmerson Maria, a junior who started as a direct-admissions student in the nursing program, now plans to be a STEM educator.

After graduating from college, Shreeve added to what she calls “her brazen choices” by moving to Houston for two and a half years of corporate work.

“I was still wanting to grow and learn,” she said. “Houston is where the pin landed on the map. Portland was not far enough away.”

Just six months before her father passed away at the age of 53 (her age now), Shreeve moved back to Prosser, commuted three hours each way to get her master’s degree, and took a 1994–1998 job as a regional project director with Washington State’s Division of Vocational Rehabilitation.

Later, during outreach as a vice president for Diversity and Administration at Columbia Basin Community College (1999 to 2006), Shreeve met adults who as children she played with at the migrant camp her grandfather called home. They were standing in line for food assistance.

“It was humbling,” she said of that pivotal moment when her empathy and connectedness deepened. “It was a realization about the work I was doing and how I could be part of a group of change agents.”

In 2009, after a two-year regional post with the University of Washington, Shreeve joined PNNL in a diversity role for nine months and then as director of training. By 2017, she took the job directing the Lab’s Office of STEM Education.

Today, Shreeve and her staff provide exposure to the world of STEM to educators, community members, and (most of all) to students in school settings without much in the way of capabilities and experiences.

That aligns with a core DOE mission: a diverse STEM workforce.

“I have an intense empathy and passion for anyone who faces difficult circumstances,” said Shreeve.

As a change agent who wants to turn dreams into realities, she said her present role goes to the heart of wanting to have an impact on the world around her.

“It’s the right thing to do,” said Shreeve. “Investing in our future workforce, for our community, for our nation, and for the national laboratory system.”

She remembered a Latino high school student who has competed in (and won) competitions sponsored by a PNNL STEM program called Mathematics, Engineering, and Science Achievement (MESA). Now in its third year, MESA is the only such program at a national lab. It serves more than 400 students in eight schools and has a two-year winning streak in statewide engineering competitions.

On the PNNL campus in the summer of 2019, Shreeve ran into the student, who was once too shy to look at her directly. “I’m an intern here,” he told her, confidently. “I’m a scientist.”