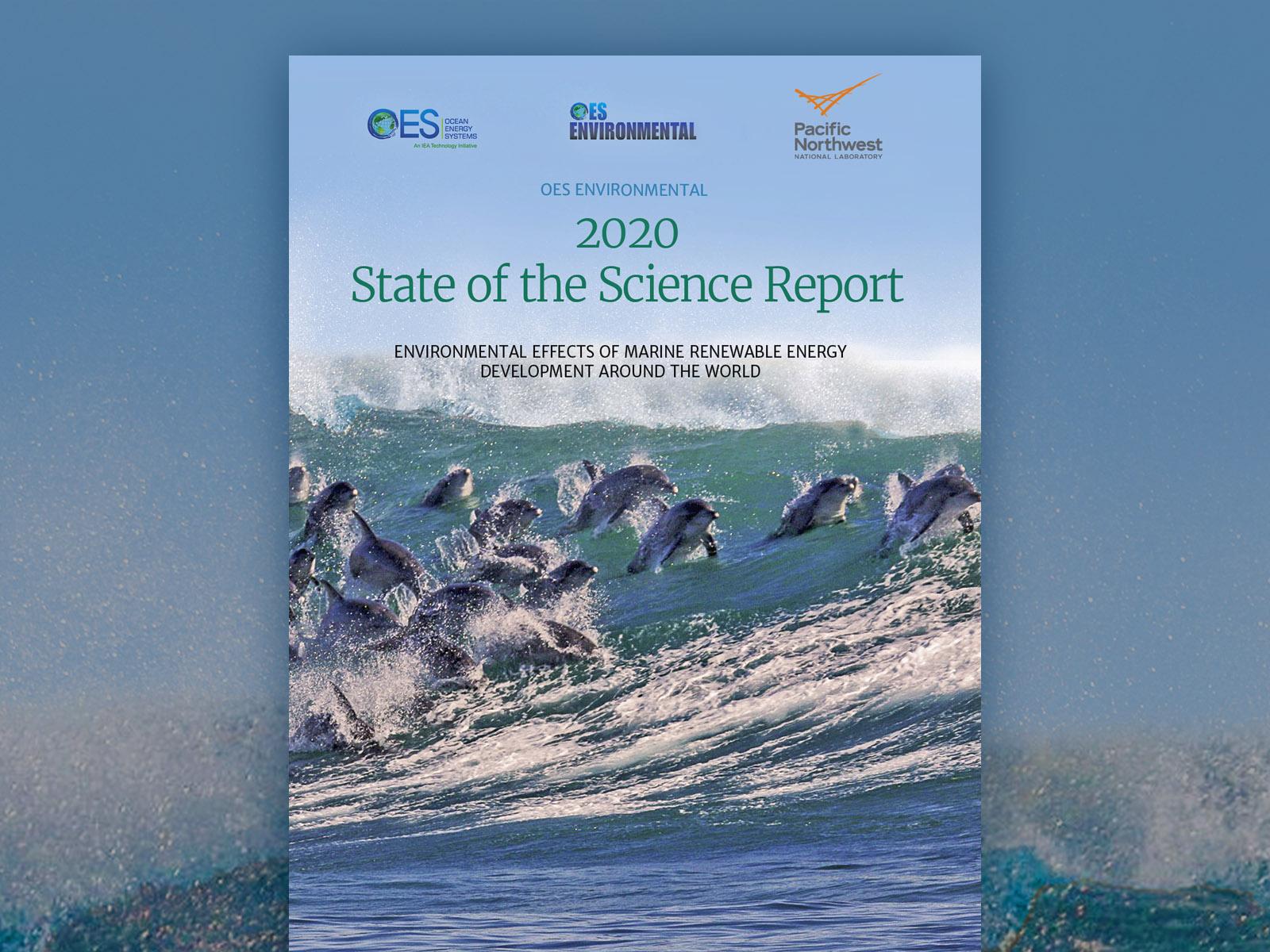 The 2020 State of the Science Report, which was released by Ocean Energy Systems (OES)-Environmental, is the most comprehensive international analysis to date on the environmental effects of marine renewable energy devices.

RICHLAND, Wash. – Marine scientists from around the world spent the last four years reviewing numerous studies and other data on the possible environmental effects of marine renewable energy (MRE) devices and found that the potential impact to marine life is likely small or undetectable. However, scientists say there is still uncertainty around some issues, as there have been relatively few sizable deployments of MRE devices around the world where data can be collected.

The 2020 State of the Science Report was released today by Ocean Energy Systems (OES)-Environmental, a collaboration under Ocean Energy Systems, supported by the International Energy Agency, and dedicated to examining the environmental effects of MRE development. The 300-page report is the most comprehensive international analysis to date on the issue. The report’s release coincides with World Oceans Day and with President Trump’s proclamation of June as National Ocean Month.

“We believe that small numbers of operational marine energy devices are unlikely to cause harm to marine animals, including marine mammals, fish, diving seabirds, and benthic animals; change habitats on the seafloor or in the water significantly; or change the natural flow of ocean waters or waves,” said Andrea Copping, an oceanographer with the U.S. Department of Energy’s Pacific Northwest National Laboratory and lead author of the report.

With the ocean covering more than 70 percent of the Earth’s surface, drawing upon the power of the ocean to provide electricity would reduce the carbon footprint from energy production, provide grid stability in remote, coastal areas, and could add $3 trillion to the global economy. MRE development is also expected to create new jobs in supply chain companies and environmental consultancies.

MRE is generated from ocean waves, tides, and currents; ocean temperature and salinity gradients; and the flow of large rivers. For example, devices like wave energy converters extract the power from ocean waves and convert it into electricity. Developing a fraction of available wave energy in U.S. waters could result in clean, reliable power for millions of American homes.

The report represents the most up-to-date knowledge on environmental effects of MRE, based on studies and monitoring from publicly available, peer-reviewed scientific literature and reports. The 30 scientists who authored the report investigated potential stressors, including:

“Despite our findings, we still need more data about what might, or might not, happen to animals swimming close to operating turbines underwater. In the years to come, we will continue to focus our research on examining this issue and building our knowledge base to help progress this important renewable energy industry,” Copping said.

The report can help MRE developers consider how to design, site and operate devices; avoid any impacts to marine animals and environments; provide information to government regulators; and inform the broader research community of the latest findings.

The authors reported that, with the few MRE devices deployed to date, no marine mammals, fish, or seabirds have ever been observed colliding with a device. Additionally, there was no evidence of harm from underwater noise from operational devices or electromagnetic fields emitted from electric cables; no significant changes in habitat have been caused by MRE devices; and potential changes to oceanographic systems or entanglement of marine animals with mooring systems or cables pose very low risks.

Henry Jeffrey, chair of OES, said, “This project, supported by the OES, reveals the latest thinking about the interaction of ocean energy technologies with the environment. I strongly encourage its use to help streamline consenting processes and support the responsible development of ocean energy around the world. Since the publication of our 2016 State of the Science Report, our understanding of potential impacts has increased as a result of more deployments and monitoring efforts, supported by continuous collaborative efforts among OES nations under the leadership of the US Department of Energy.”

The report was funded by DOE’s Water Power Technologies Office and OES; more than a dozen PNNL researchers served as authors.  OES functions within a framework created by the Inter­national Energy Agency and represents nations with an interest in developing MRE. OES-Environmental is an initiative under OES, made up of 15 countries that collaborate to evaluate the state of the science of potential environmental effects of MRE development, to assist with permitting processes, and to allow increased and responsible deployment of devices.

PNNL leads OES-Environmental for the United States on behalf of DOE. PNNL also manages Tethys, a knowledge management system that provides access to information and research about the potential environmental effects of offshore wind and MRE development. Tethys was created through a partnership between DOE and the OES-Environmental initiative.