Mapping the Body, Speck by Speck

Map of the mouse uterus illustrates new technology to track proteins; applications for people too 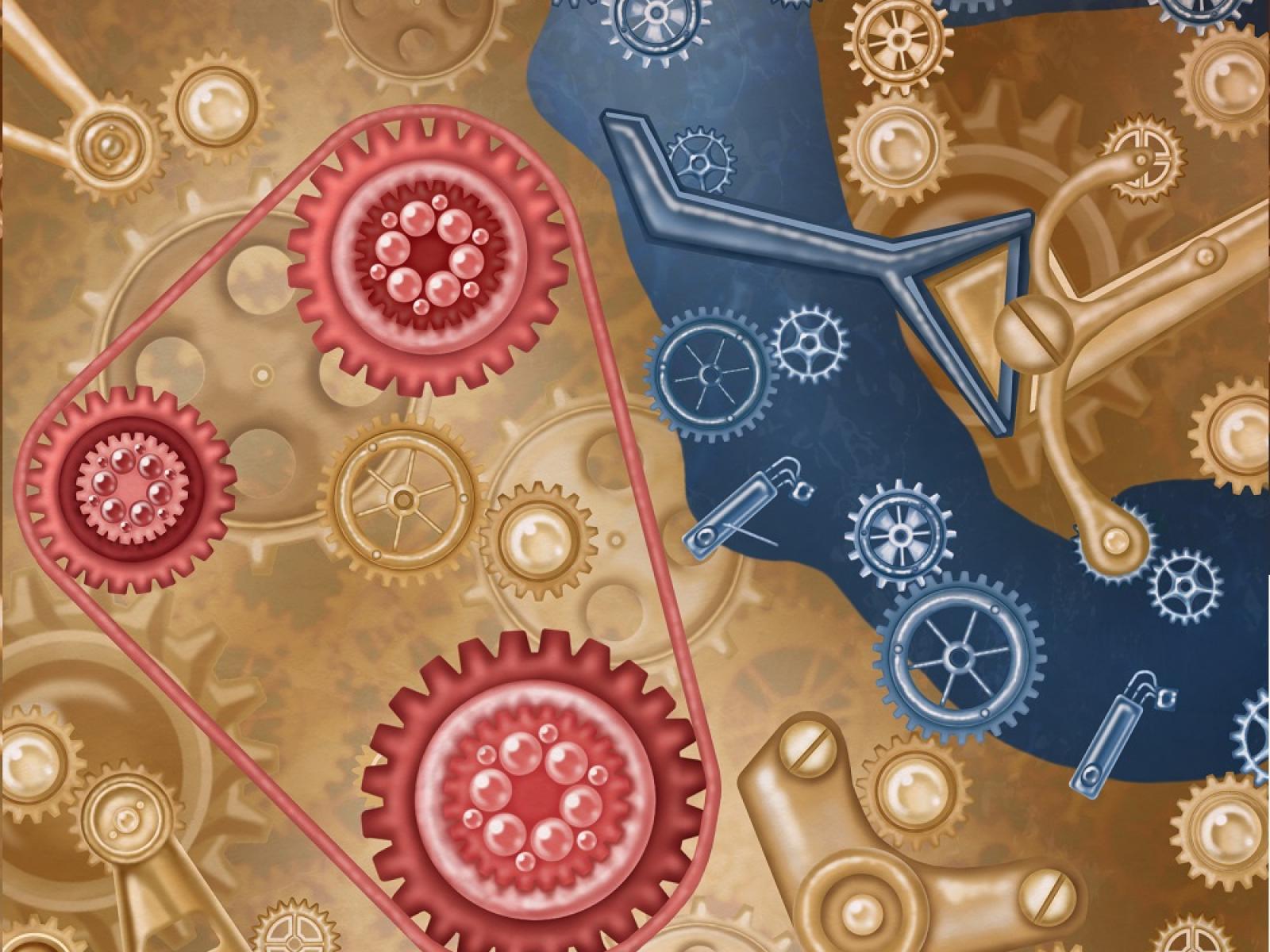 An artist’s illustration of the complex and interactive molecular machinery in the mouse uterus. A PNNL team has measured more than 2,000 proteins in tiny regions of uterine tissue, each measuring 100 microns long, 100 microns wide and just 10 microns thick, making the multicellular organ the first to have its proteome mapped in such meticulous detail.

PNNL chemists, biologists, and data analysts have teamed to create one of the most in-depth portraits ever taken of protein populations across tissue sections that are vanishingly small, each tinier than a speck of dust just visible on a computer screen.

And just which tissue enjoys the status of being the first multicellular organ to have its proteome – its collection of proteins—mapped in such detail?

That honor belongs to the humble mouse uterus, a tiny organ less than a few millimeters in diameter that makes the rodent’s procreation possible.

The team, led by biochemist Kristin Burnum-Johnson, gathered an unprecedented amount of information about the tissue’s proteins, then converted the mass of data into a meticulous portrait of protein abundance in a mouse uterus.

The work is part of a global effort to better understand proteins, which are massively important in the molecular world. On a cellular level they largely govern whether cells live or die; more broadly, they can determine, for example, why one person gets cancer while another person doesn’t or why some brain cells succumb to Parkinson’s disease while others thrive.

But the in-depth understanding of protein expression and activity that scientists need to improve the environment or help people often remains elusive.

To grasp the challenge that researchers face, consider an airport’s hundreds of employees: pilots, luggage handlers, security screeners, shuttle drivers, cooks, mechanics, and many others. Some are active on runways, some are busy in kitchens, some are on break and relaxing in the lounge.

At low resolution, an analyst might simply detect 2,000 people present at the airport. But with more knowledge, an analyst might be able to identify which types of employees are active in the kitchen, who’s busy on the runways, and who exactly is flying the planes. Maybe people turning steering wheels are driving shuttles while people handling large tubes are fueling planes. The knowledge is invaluable if something goes awry—for instance, who’s responsible if the luggage doesn’t reach its destination or if there’s a collision on the runway.

Now think of each employee as a protein, multiply by 1,000, and condense all that activity into a speck and you have a glimpse of the action that scientists would like to untangle—in every bit of tissue of every organism. Scientists need to know exactly which molecular players are active, where, and when. Simply observing the condition of a larger body—for instance, that a person is ill—usually is not overly helpful. To help people, to cure disease, or to improve the environment, scientists need to know the proteomic landscape of an organism in great detail.

That’s what the PNNL team set out to do. For the Nature Communications study, the team analyzed uterine tissue from pregnant mice, measuring protein abundance in tiny snippets of tissue.

The first step was to build upon previous work by colleagues Zhu and Kelly (now at Brigham Young University) to measure hundreds of proteins from a tiny liquid sample. The team focused on tiny regions of tissue, or voxels, each measuring 100 microns long x 100 microns wide and just 10 microns thick. The team used automated PNNL technology known as nanoPOTS—nanodroplet Processing in One pot for Trace Samples—to extract and digest proteins from each voxel in just 200 nanoliters of fluid, then used mass spectrometry to measure levels of more than 2,000 proteins in each sample.

"We can interrogate a piece of tissue, see what’s in there, and measure a protein’s abundance as it changes across cell types and microenvironments"

To help interpret the data, the team tapped Bramer, Stratton, and Webb-Robertson, who are experts at aggregating and analyzing large amounts of data into forms that can be interpreted more readily and accurately. They used Trelliscope, an open-source platform that PNNL developed for data visualization and management, to convert the mounds of numbers into a portrait of protein abundance.

To demonstrate the potential for biological and clinical applications of this technology, the team mapped the molecular distribution of the proteins across the unique cellular microenvironments of mouse uterine tissue sections preparing for embryo implantation.

The result? The team showed that its visual representation of the protein data matched the known anatomy of the mouse uterus. Measurements distinguished between luminal epithelial cells, which line the uterine cavity and are the first cells to make direct contact with an embryo in its early form; stromal cells, which support an embryo’s growth during early pregnancy; and other cells known as dispersed glandular epithelial cells. The team’s measurements also differentiated unique tissue microenvironments within the same cell populations.

The team’s tissue map conveys information important for understanding exactly what’s happening in an organism. It’s like a team taking data about weather—snowfall amounts, temperatures, humidity, and so on—and building a map of the United States that accurately places mountains, rivers, and other geographic features, instead of simply focusing on state boundaries.

“We can interrogate a piece of tissue, see what’s in there, and measure a protein’s abundance as it changes across cell types and microenvironments,” said Burnum-Johnson. “This is much more telling than simply looking at a large piece of tissue, processing it and then seeing what’s present.”

Toward a Human Biomolecular Atlas

Burnum-Johnson, along with Charles Ansong, Piehowski, and Zhu, are part of a large initiative funded by the National Institutes of Health (NIH) to map the entire human body at single-cell resolution. The team is part of a cohort focused on the technology development portion of the initiative, known as the NIH Human Biomolecular Atlas program, or HuBMAP. The team’s nanoPOTS and mass-spectrometry imaging technologies are among the avenues HuBMAP is exploring to map the body’s tissues at the cellular level, an effort detailed in a recent paper in Nature.

The PNNL portion of HuBMAP is in collaboration with former PNNL scientist Julia Laskin, now at Purdue. Laskin was corresponding author of a paper featured on the December cover of the journal Nature Protocols which explored a technique to map molecules to a resolution less than 10 microns. Burnum-Johnson was also an author of the paper, which focused on nanospray desorption electrospray ionization—or nanoDESI—mass spectrometry.

Funding for the new research came from the NIH Common Fund, which supports HuBMAP, as well as the National Institute of Child Health and Human Development (NICHD). The mass-spectrometry analyses for the Nature Communications paper were done at EMSL, the Environmental Molecular Sciences Laboratory, a U.S. Department of Energy Office of Science user facility located at PNNL.