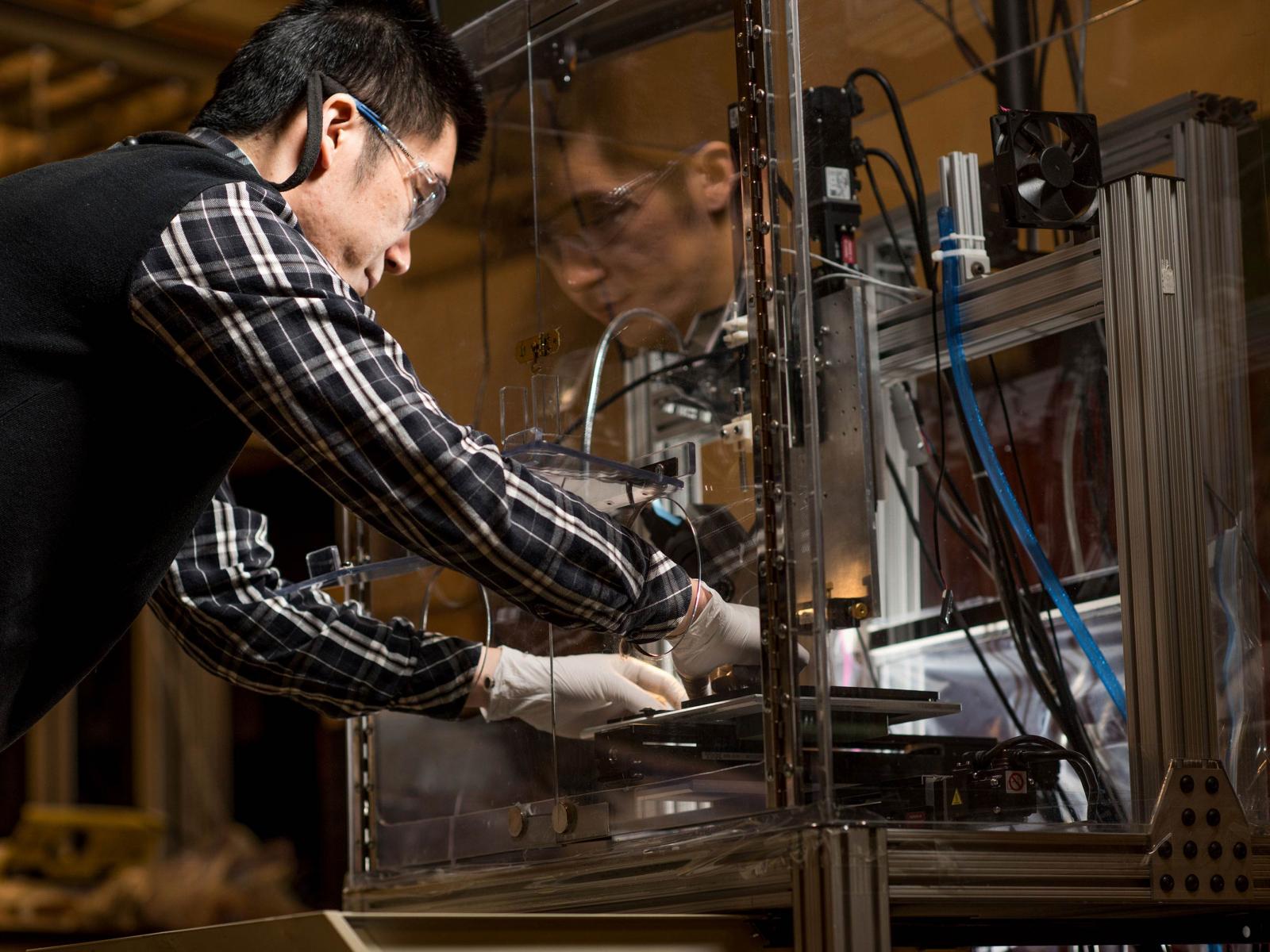 Ying Zhu, a developer of the nanoPOTS technology, places a chip containing samples for analysis into the automated system.

Scientists have obtained a slew of key information about proteins, the molecular workhorses of all cells, from single human cells for the first time.

The stockpile of information about proteins — the most such data ever collected from a single mammalian cell — gives scientists one of their clearest looks yet at the molecular happenings inside a human cell. Such data can reveal whether a cell is a rogue cancer cell, a malfunctioning pancreatic cell involved in diabetes, or a molecular player important for a preemie's survival.

We can identify more proteins in one cell than could previously be identified from a group of hundreds of cells.

These events and many more are determined by the actions of proteins in cells. Until now, detailed information on proteins inside single cells was hard to come by. The raw "data" — the amount of each protein — in a cell is extraordinarily scant and hard to measure. That's largely because scientists can't amplify proteins the way they can genes or other molecular messengers.

Now, in a study published in Angewandte Chemie, scientists from the Department of Energy's Pacific Northwest National Laboratory, working with counterparts at the University of Rochester Medical Center, show how they were able to learn an unprecedented amount of information about the proteins within samples of single human lung cells.

The scientists analyzed single cells, first from cultured cells and then from the lungs of a human donor, and detected on average more than 650 proteins in each cell — many times more than conventional techniques capture from single cells.

The team, including analytical chemists Ying Zhu and Ryan Kelly and biochemists Geremy Clair and Charles Ansong, made the findings thanks to a technology created at EMSL, the Environmental Molecular Sciences Laboratory, a DOE Office of Science user facility located at PNNL. The team developed the technology, called nanoPOTS, to measure proteins in a tiny, almost unimaginable amount of material.

"NanoPOTS is like a molecular microscope that allows us to analyze samples that are 500 times smaller than we could see before," said Kelly, the corresponding author of the paper. "We can identify more proteins in one cell than could previously be identified from a group of hundreds of cells."

That's important for a couple of reasons. Some proteins exert immense influence within a cell, perhaps determining whether the cell will live, die, mutate or travel to another part of the body, even when they are at very low levels that are undetectable using today's methods.

In addition, conventional technologies typically analyze hundreds or thousands of cells, pooling them into one batch for analysis. Those findings represent an average view of what's happening in that tissue; there is little insight to what's actually happening in a specific cell. That's a problem if there's variability from cell to cell — if some cells are behaving normally while other cells are cancerous, for instance.

In the current study, the team analyzed the proteins in a sample of fluid that is less than one-ten-thousandth of a teaspoon. Within that sample, the proteins amounted to just .15 nanograms — more than ten million times smaller than the weight of a typical mosquito.

Once scientists have their hands on such a valuable commodity — the innards of a single human cell — they put it through a battery of processing steps to prepare for analysis. But working with such a tiny sample has posed significant roadblocks to single-cell analysis. As the material is transferred from one test tube to another, from machine to machine, some of the sample is lost at every stage. When the original sample amounts to no more than a microscopic droplet, losing even a tiny bit of the sample is catastrophic.

Zhu and Kelly developed nanoPOTS, which stands for nanodroplet Processing in One pot for Trace Samples, to address this problem of sample loss. The technology is an automated platform for capturing, shunting, testing and measuring tiny amounts of fluid. Keys to the technology include a robot that dispenses the fluid to a location with an accuracy of one millionth of a meter, moving between tiny wells that minimize the amount of surface area onto which proteins might glom.

Within those tiny wells, scientists run several steps to isolate the proteins from the rest of the sample. Then, the material is fed into a mass spectrometer which separates out and measures each of hundreds of proteins.

All told, the technology reduces sample losses by more than 99 percent compared to other technologies, giving scientists enough of the scant material to make meaningful measurements — to tell which proteins are at high levels and which are at low levels. That's vital information when comparing, for example, brain cells from a person with Alzheimer's disease to those from a person not affected, or looking at cells that are cancerous compared to nearby cells that are healthy.

PNNL scientists have used NanoPOTS to get a closer look at the proteins involved in the development of type 1 diabetes in the pancreas. The group is currently developing a protein map of cancerous tumors, with funding from the National Cancer Institute under the Beau Biden Cancer Moonshot Initiative.

In addition to lead author Ying Zhu and corresponding author Ryan Kelly, PNNL authors of the paper include Geremy Clair, Charles Ansong, William Chrisler, Yufeng Shen, Rui Zhao, Anil Shukla, Ronald Moore, and Richard D. Smith. Other authors are Ravi Misra and Gloria Pryhuber from the University of Rochester. Teams from both institutions are part of a national research initiative known as the LungMAP project to develop a molecular atlas of the developing human lung during late pregnancy and early childhood.