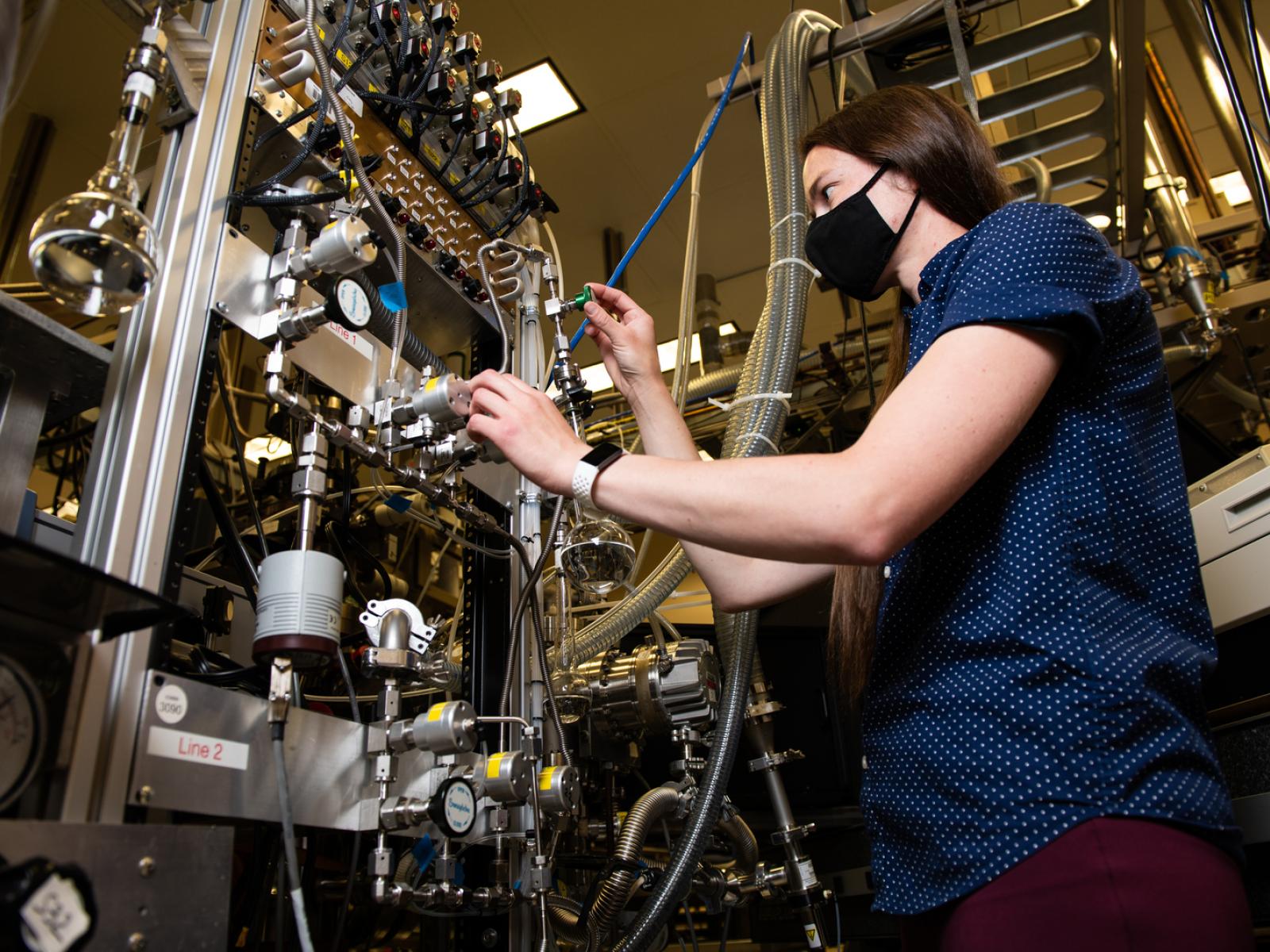 Drink in this factoid: water is the weirdest liquid of all.

Most fluids have predictable and similar behaviors. But unlike other fluids, water is most dense as a liquid, not a solid. Aquatic life survives the winter because ice floats instead of sinking and expanding into one huge solid glacier. Water’s unique but strange properties help support life.

For decades, scientist have been trying to figure out what’s up with the strange behavior of water. The answers appear to lie in a long-hidden window of extreme temperatures.

In 2020, scientists at Pacific Northwest National Laboratory (PNNL) made a huge leap in understanding the phenomenon. Detailed in the journal Science, the team used a groundbreaking laser heating technique that revealed—for the first time—the nanoscale changes that supercooled liquid water undergoes between -117.7°F (190 K) and -18.7°F (245 K).

The technique pulled back the curtain from this previously shrouded temperature window where water’s strange and subtle structural changes take place. PNNL chemical physicist Greg Kimmel described this unexplored expanse as “the whole ball game in understanding the structure of water.”

That ball game is part of the Condensed Phase and Interfacial Molecular Sciences program sponsored by the U.S. Department of Energy’s Office of Basic Energy Science. The program funds research to understand the fundamental physics and chemistry of systems that are far from equilibrium, and how they get to equilibrium. In this case, that system is liquids—specifically, water.

“Water is one of most important solvents we have,” said Kimmel. “We’re trying to better understand how water behaves at interfaces, in confinement and in solutions, how it condenses and crystallizes, etcetera.”

The implications are far-reaching, ranging from biological and physical processes related to climate change, to better chemistries for energy and nuclear processing, to new medicines for fighting diseases.

Researchers in all these areas will soon be rubbing elbows at PNNL’s Energy Sciences Center, scheduled to open in late 2021. The new 140,000-square-foot venue will host up to 250 theoreticians, experimentalists, visiting scientists, and support staff, not to mention the latest scientific instrumentation. Kimmel and his colleagues look forward to working in the collaborative environment while staying laser-focused on supercooled water.

A question of equilibrium—or not

“As you lower the temperature, most liquid molecules pack together very tightly and are very dense. But below 39°F, water is just the opposite,” explained Loni Kringle, who worked as a postdoctoral researcher with Kimmel’s team on the supercooled water studies. “Water molecules form tetrahedral bonds that take up a lot of space. As water cools, it expands and lowers in density.” Think of ice cubes popping out of their tray.

Scientists understand this big picture very well, but how it happens in detail? Not so much.

Water that stays in liquid form well below the normal freezing point—called supercooled water—is far from true equilibrium, the most stable state. If its structure isn’t changing, the water is in a so-called metastable state. The experiments by Kimmel and team measured the rate at which supercooled water relaxes from its starting configuration to "metastable equilibrium” before it crystallizes.

“Whether you want your material to achieve equilibrium or not depends on what properties you want it to have,” explained Kimmel, using radioactive waste as an example. “If you want to capture and hold radioactive nuclei, you want to maintain a glass, not a crystalline material, which can grow grains and expel impurities from the surface. That would be a problem.”

From burping waste to supercooled water

Kimmel joined PNNL in 1992 to study the reactions responsible for the buildup and sudden release of hydrogen gas from nuclear waste stored in underground tanks at DOE’s Hanford Site. He simulated the “burping” process by shooting electrons at thin films of water.

His work aligned well with fellow PNNL scientist Bruce Kay’s research into the structure and kinetics of films at interfaces, looking at how water desorbs and energy releases across a range of temperatures. The two scientists pursued an idea to try laser heating to measure the rate at which water crystallizes and diffuses.

Theories existed about reversible structural transformations before water crystallizes, at temperatures above -171°F (160 K) and below -36°F (235 K)—but there was no evidence. Previous experiments jumped right over the span.

“That temperature range is very hard to reach and control experimentally, and that’s what the pulsed heating technique overcame,” explained Kringle. She worked alongside another postdoctoral researcher, Wyatt Thornley, to perform the experiments and help analyze the data.

The team’s follow-on research, published in the Proceedings of the National Academy of Sciences in April, examined “the nitty gritty of the kinetics—how water films relax into two structural motifs,” said Kringle. “We looked at the specifics of the structural changes, going beyond qualitative observations by calculating the differences when starting from high versus low temperatures, then comparing the results with models in the literature.”

In the future, the team plans to work with University of Utah professor Valeria Molinero to gain a better understanding of the kinetics and dynamics occurring during the pulsed heating experiments. Molinero is an expert on molecular dynamics simulations of aqueous systems.

Collaborations like this embody the vision behind the Energy Sciences Center. The researchers are already thinking about the different directions the new venue and their pulsed heating technique could take them—and others.

One idea is to alter the temperature of their experiment before water reaches the metastable equilibrium state. This adjustment would allow them to study how water “remembers” and “ages,” as seen in supercooled glass research.

Another avenue of study is to examine “heavy water” that contains deuterium, a naturally occurring isotope of hydrogen. Deuterium contains an extra neutron that makes it heavier than a standard hydrogen atom. Comparing the quantum-scale interactions that occur in heavy water versus regular water will give scientists more clarity about water’s weird behavior when compared to other liquids.

And because pulsed laser heating lends itself to fast reactions, other researchers have expressed interest in using the technique for chemistry studies.

Meanwhile, Kringle has her own plans.

“The timescales of our technique have been a limitation when looking at pure water. I did a quick exploratory experiment and found that if we add other molecules to the water, like carbon monoxide, we can shift the temperature where the structural transition occurs,” said Kringle. “I would like to follow up and see what is happening at the ends of the transition. This will provide information about the solubility of the other molecules we’re adding.”

Kringle, who is also passionate about STEM education and outreach, is now a permanent staff scientist, joining Kimmel and Kay in PNNL’s Physical Sciences Division, led by Wendy Shaw.

“Loni is a great example of the next generation of scientists and engineers who will carry the baton of scientific discovery into the future, not just at PNNL and the new Energy Science Center, but at research institutions across the country,” said Shaw.