How the Wind Blows 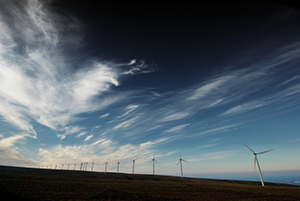 The intermittency of wind energy has long plagued the power source from achieving greater integration with the electrical grid. While we can’t control when the wind blows, we can certainly get better at predicting it.

But wind forecasting is not just being able to predict when it will blow and when it won’t. Wind forecasting involves calculating how much energy will be produced, and a lot of factors—such as speed, direction, shear, and duration—go into assessing the energy output of an upcoming wind event.

To maximize production, wind farm operators rely heavily on forecasting models and simulations that take into account fine-resolution variables. The accuracy and sensitivity of these models directly affect wind energy production, essentially telling operators how much energy could be produced under certain conditions.

Wind speeds, however, vary wildly at the height of turbines, often changing multiple times within an hour, making it difficult to forecast energy outputs. In addition, wind farms are often placed in areas of complex terrain, where hills and valleys channel the wind and make it more turbulent, adding another layer of complexity to predicting wind speeds.

, PNNL lead a team of scientists that included researchers from Nanjing University and Lawrence Livermore National Laboratory to study the effect of different variables in forecasting wind speed and power at turbine hub heights

. Using a range of values as opposed to values that were previously viewed as constants, the team found depending on the variables chosen, wind power could range from 20 to 100 percent of the rated power during select time periods. In other words, the models are missing some key variables and wind farm operators could be missing out.

The PNNL lead team made the discovery by using formal Uncertainty Quantification techniques—a research method that attempts to determine the likelihood of an outcome when certain variables aren’t known—in conjunction with the Weather Research and Forecasting (WRF) model, a popular process and prediction meteorological model. The team investigated the WRF model response to changes in the values of specific constants and identified which model parameters have the largest influence on the simulated wind speed and potential wind power. To verify the accuracy of the model, they compared the simulation results to data collected in the spring as part of the DOE-supported Columbia Basin Wind Energy Study.

The next step is to extend the analysis to the summer, fall, and winter seasons and apply the techniques to alternate boundary-layer parameterizations commonly used in the WRF. The results of this work will help guide model development for continued improvement in tracking wind energy, the design of field studies, and, ultimately, better integration of wind energy into the power grid.