Getting Clear about Clean Air 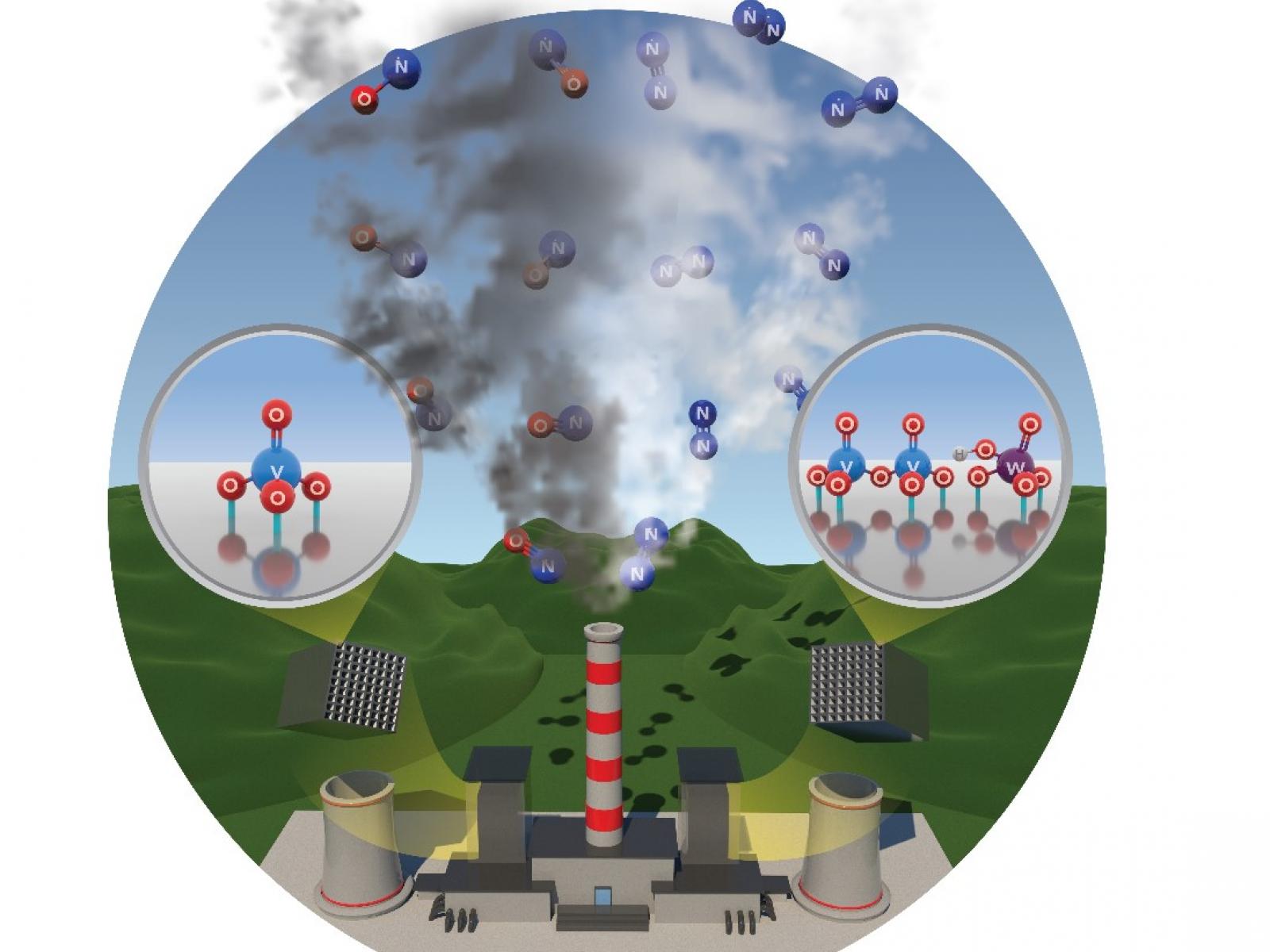 Nitrogen oxides, also known as NOx, form when fossil fuels burn at high temperatures. When emitted from industrial sources such as coal power plants, these pollutants react with other compounds to produce harmful smog. To mitigate these NOx emissions, engineers developed a process called selective catalytic reduction (SCR) where NOx passes through a converter, or air scrubber, that transforms the dangerous chemical into harmless nitrogen gas.

While SCR is not new, the underlying chemistry of the metal oxides used in the process remained unknown—until now. A research team led by PNNL chemist Jian Zhi Hu, along with collaborators from multiple universities, has described decisively how the metal oxides are arranged.

“How a reaction works has implications when we’re trying to design even better materials,” said Nicholas Jaegers, the first author of the paper and doctoral student at Washington State University. “If we can identify a trend of what is working specifically at a molecular level, then we might be able to alter the system to have more of the effects we want or apply that to other reactions with the same activity requirements.” Jaegers is a student in the laboratory of Professor Yong Wang, the senior scientist guiding the research.

As in many toxic relationships, nitrogen and oxygen—the two otherwise benign elements that make up NOx—are dangerous together, and, once bonded, difficult to get apart. The right catalyst facilitates the break up, and under the right conditions, helps the atoms separate even faster.

The SCR units designed to break down NOx in power plants or other stationary combustion facilities are made of a titanium oxide support lattice with vanadium oxide and tungsten oxide sitting on top. NOx will not split without a catalyst such as vanadium oxide, but the split is faster and more complete when tungsten oxide is added.

Scientists speculated that tungsten’s role was structural and not a direct part of the active site in the reaction, but they couldn’t be sure without knowing what was happening at the molecular level.

Until now, the limits of measuring molecular structures prevented understanding how the reaction worked. Many techniques can detect the presence of certain elements, their concentrations, and their chemical states. Those methods, however, either degrade experimental samples or lack the precision to make a definitive claim about whether a molecule exists alone or within a coupling or a group. The team overcame these limitations with a combination of high-speed magic angle spinning nuclear magnetic resonance (MAS NMR), reactivity tests, and computational modeling to make their discovery.

“To find this evidence, MAS NMR is absolutely necessary,” said Karl Mueller, chief science and technology officer of the Physical and Computational Science Directorate at PNNL. The instrument, funded by the Department of Energy’s Basic Energy Sciences, allowed the scientists to make decisive conclusions about the molecular structures responsible for the catalytic reaction.

Searching for a Signal

MAS NMR works by spinning a sample in a strong magnetic field at a specific angle and shooting radio waves through it to excite and detect the resonant frequencies of nuclear spins associated with atoms. Because each atom has a different frequency, the waves energize only the targeted elements. Each atom sends a response that reveals its location and what is around it. Based on that response—and how detailed it is—scientists can understand a material’s structure.

MAS NMR is particularly sensitive to the structural changes in vanadium-containing materials, but the team didn’t know which responses to expect from different arrangements of vanadium oxide. In close collaboration with David Dixon’s team from the University of Alabama, they modeled output responses for various vanadium arrangements, then matched the modeled outcomes to the MAS NMR results. This comparison allowed the researchers to identify the surface structures.

The team found that unbonded single vanadium oxides, also known as monomers, were relatively slow at allowing the NOx reaction to proceed. However, pairs or clusters of vanadium oxides—close together on the titanium support—dramatically increased the reaction efficiency. This was precisely determined by Professor Israel Wachs’ group from Lehigh University.

The team also learned the tungsten was necessary not for its reactive properties, but because it encouraged the vanadium oxides to arrange into the reactive clusters. Unlike isolated vanadium oxide monomers, vanadium clusters work better because they provide several active sites working together to make the reaction go faster. The study shows that the reaction needs two sites closer together to work.

With the structure in hand, the next step is to understand why the tungsten-promoted reaction is more stable. To that end, the team is now studying how the reaction could be different in an aged versus fresh SCR unit and, among other things, how water might affect the reaction. In time, these findings may influence how SCR units are made.

Results of the study appear in the journal Angewandte Chemie. Researchers include Nicholas R. Jaegers, Yang He, Eric Walter, Ying Chen, Chongmin Wang, Mary Y Hu, Karl Todd Mueller, Yong Wang, and Jian Zhi Hu of PNNL; David A. Dixon and Monica Vasiliu of the University of Alabama; and Israel E. Wachs and Jun-Kun Lai of Lehigh University. The research at PNNL and the University of Alabama was supported by the Department of Energy, Office of Science, Office of Basic Energy Sciences, Division of Chemical Sciences, Biosciences, and Geosciences Catalysis Program. The research at Lehigh University was supported by the Center for Understanding & Control of Acid Gas-Induced Evolution of Materials for Energy, a DOE-funded Energy Frontier Research Center. Experiments were conducted in the Environmental Molecular Sciences Laboratory (EMSL), a national scientific user facility sponsored by the Department of Energy’s Office of Biological and Environmental Research at Pacific Northwest National Laboratory.