Energy for the Long Run 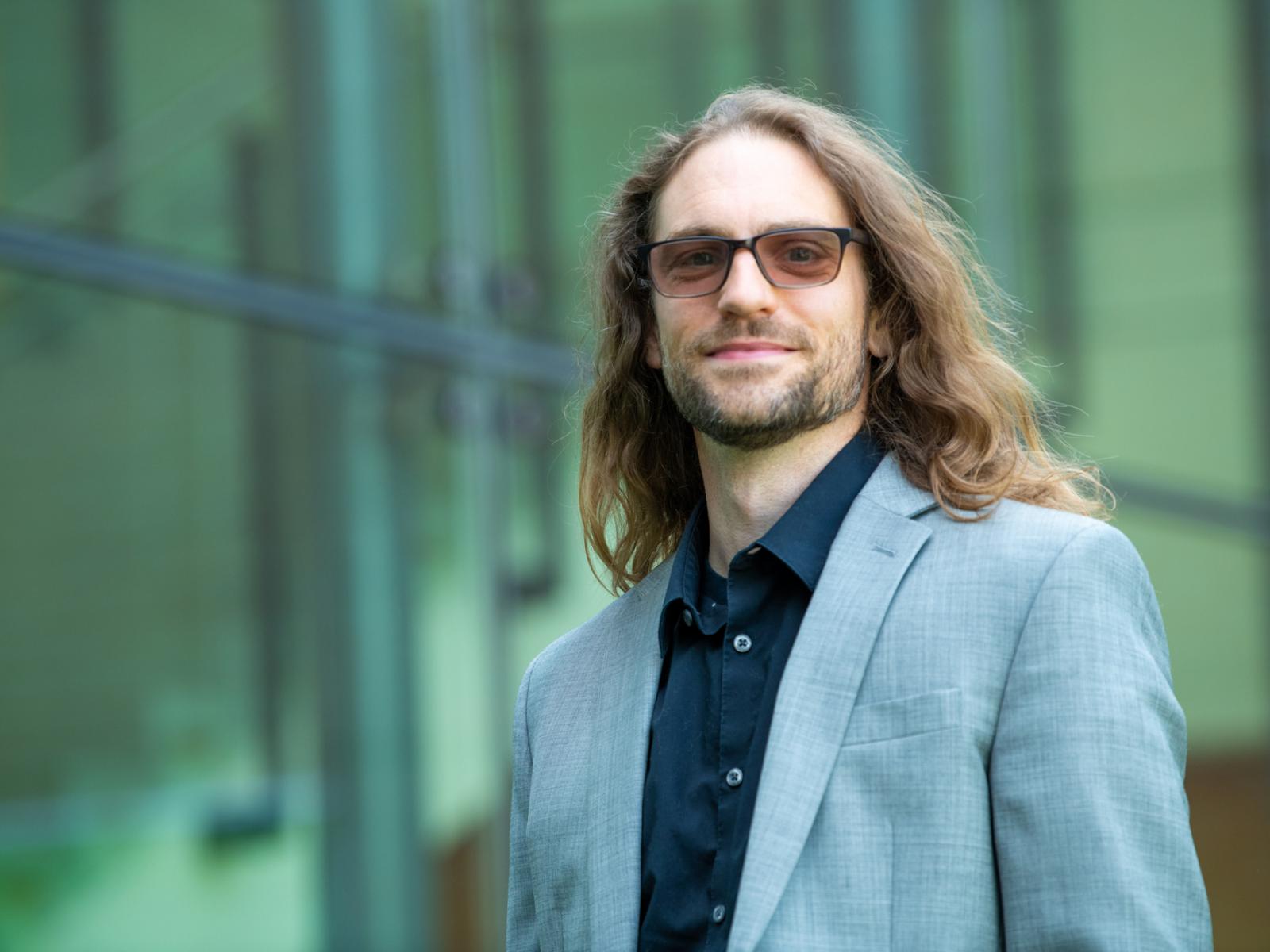 Marcel Baer is a computational scientist at PNNL. He arrived at the Richland, Washington, campus in 2010 as one of the first recipients at the lab of the Linus Pauling Fellowship.

Bochum, Germany, is a world away from Richland, Washington, and a friendship helped bridge that gap for Marcel Baer.

A pivotal contact 15 years ago helped lead Baer, then pursuing a chemistry PhD at Ruhr University in Bochum, to Pacific Northwest National Laboratory (PNNL) in Richland.

Today, Baer is a computational scientist working in PNNL’s Physical Sciences Division with a prominent effort in materials science and physical bioscience. Before his arrival in 2011, Baer had already worked closely with two scientists who would later become PNNL Lab Fellows. One of them, Chris Mundy, helped Baer choose PNNL.

While pursuing his doctoral degree, Baer secured a summer internship at Lawrence Livermore National Laboratory in Livermore, California, where he met Mundy, a group leader at Livermore. Baer became a valued collaborator in his brief stint, catching Mundy’s attention.

They kept in contact. In his final year at Ruhr University, Baer joined Mundy for an extended research visit at PNNL, where Mundy had moved. When Baer completed his PhD, he was selected as one of the first recipients at PNNL of the Linus Pauling Fellowship. He arrived at PNNL and resumed his collaboration with Mundy as mentor. In a decade’s span, they have co-authored 40 research papers.

“Marcel is devoted to understanding the molecular nature of collective phenomena. He does really insightful work in unraveling the details of spectroscopic measurements,” Mundy said. “What does that mean in terms of being a colleague? He’s reliable and he’s accountable. And he’s responsible and responsive, right? That’s a great colleague.”

And by his own admission, Baer, to this point, has kept a low media profile outside of PNNL.

“Well, to be honest,” Baer said with a chuckle, “I kind of like flying low under the radar.”

That may be, but his proficiency with science and math was readily apparent to anyone who knew the youngster in a small town in western Germany. “There was something about fractions that are so intuitive to me,” Baer said, recalling that soon he was joining his older sister for her math homework. “I wouldn't say that I'm like a prodigy or anything, but solving math equations seemed not complicated, but natural.”

With a brain for math and science, the son of two accountants figured he was headed to a medical school. Then chemistry intervened, thanks to a high-school physics teacher.

The path led in 2003 to Ruhr University, not far from the western German city where he grew up. At the university, Baer encountered Roger Rousseau, then a university research associate in theoretical chemistry.

“I remember this clean-cut kid—neatly dressed, really short hair—who’d show up for work at 5 or 6 a.m., the same time as me,” said Rousseau, who today is a PNNL research group leader and Lab Fellow—one of the two, along with Mundy, that Baer encountered at the start of his career.

Baer joined Rousseau on a research project. Rousseau said he was wary of the young student, mostly because the preceding research intern had collected unusable data.

“We had to throw it all out,” Rousseau recalled about the predecessor’s work.

“He did a fantastic job on those calculations,” said Rousseau. “He was very careful, and he did a very thorough analysis.”

With the research completed, Baer also helped write a Journal of Physical Chemistry paper, published in 2006, that explored elastin, the protein that allows human connective tissue to resume shape after stretching or contracting. It was Baer’s first research paper as a contributor.

As his career unfolded, it would be one of several examples where colleagues noticed the traits that were displayed in collecting the data for that first paper: Baer is a meticulous researcher, someone who is extraordinarily careful in his methodology and procedures.

“He’s creative, too,” said Mundy, a PNNL Lab Fellow. “Those collective traits really are not all that common in science. The lab is very lucky to have someone with those qualities in its ranks.”

In it for the long haul

Baer will soon bring his research, and those attributes, to the Energy Sciences Center (ESC), a new research laboratory on Richland’s main campus set to open in fall 2021. The facility will elevate PNNL’s stature as a leading innovator in chemistry and catalysis, materials science, and energy storage research.

As he prepares to move into the ESC, Baer also is preparing for another destination. On July 10, he will run in the 50-mile event of the Mt. Hood Races, held near Timothy Lake on the south side of the mountain. He had to enter a lottery to be among the 150 participants.

“It will be my first attempt going that distance,” he said.

Baer can see some of the parallels between his efforts in the lab and training on a trail.

“There’s a lot of pain when you do training and there's a similar pain in pursuing a scientific goal, if you want to do it right,” he said. “There are no short cuts. Research demands a long view, with hard-earned rewards. Sprinting has no benefit.”

“The great benefit of this building is bringing a broad spectrum of groups together—synthetic chemists, physical chemists, theoretical chemists, material scientists. Many of these researchers have been spread around the PNNL campus. Now, many groups will be co-located in the ESC, which is a tremendous benefit. One of the strengths of PNNL is having the expertise of people doing 20 years, 30 years of research science. If you're closer together, you're bumping into each other more frequently or you have the chance of communicating faster, not through an email that you put off for like a week or so.”

“I often tell people I work in basic energy. My wife tells me to not say ‘basic energy’ because it sounds too simple,” Baer said. “But that’s what it is. It’s just that the fundamental science behind it isn’t so simple.”