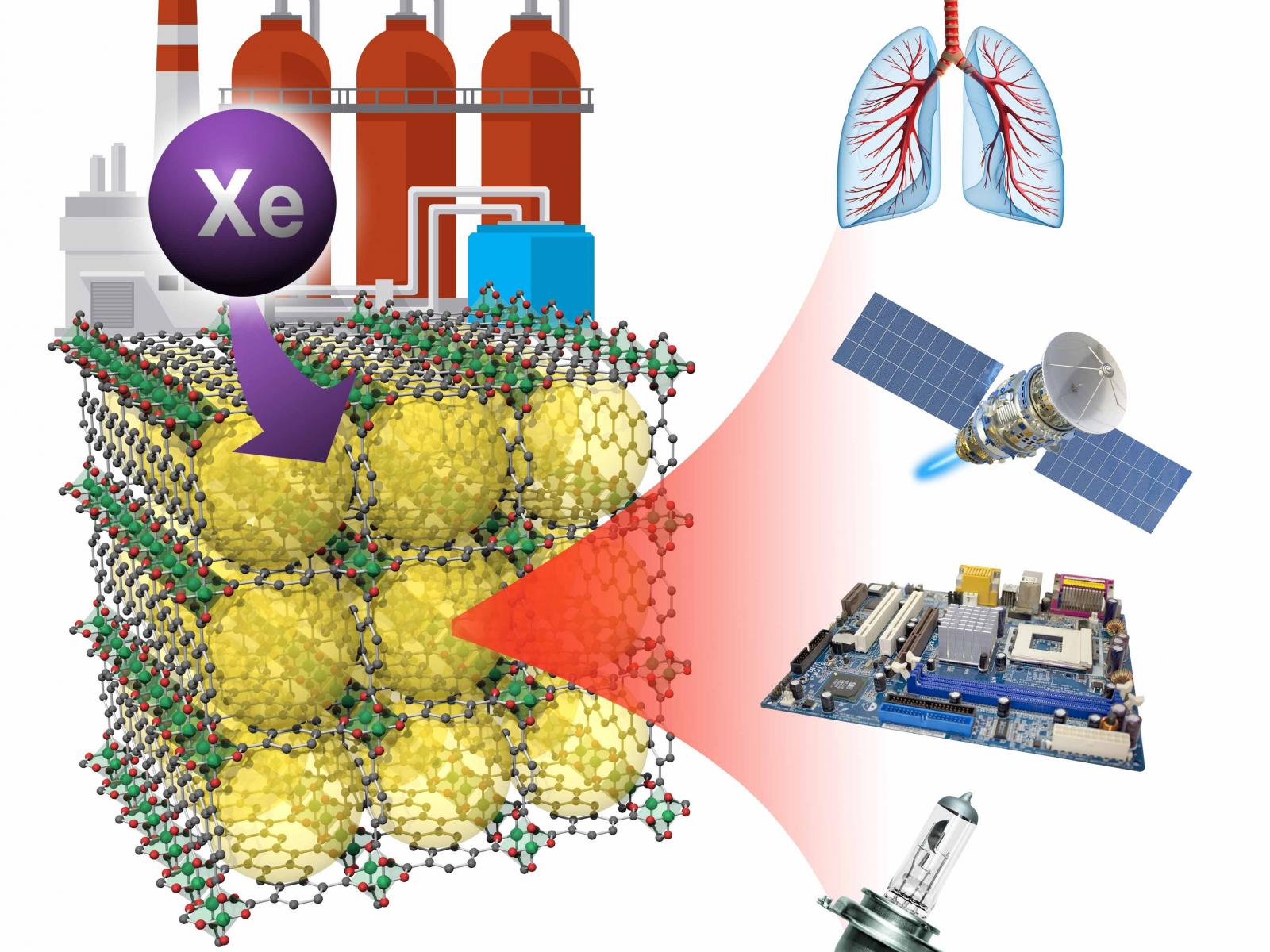 Metal Organic Frameworks, with nanopores and a high affinity for xenon, can separate the gas from air or waste streams. Xenon has applications in various fields including lighting, space propulsion and medicine.

From space propulsion to lighting to surgical anesthesia, the applications and needs for xenon gas are growing. And the good news is that researchers are advancing the science to more easily remove xenon from waste streams and collect the low amounts of it found in the atmosphere.

Researchers at the Department of Energy's Pacific Northwest National Laboratory are at the forefront of research developing porous nanoscale materials to capture xenon. They report in the journal Chem this month, that inexpensive materials called metal-organic frameworks have been very successful in separating the gas in a way that may make it far less expensive than existing means of producing it.

Currently, industry uses a common but expensive process called cryogenic distillation to separate xenon from other gases or the atmosphere. In that costly process, a lot of energy is used to chill entire gas streams down to far below freezing in order to concentrate the xenon.

"The process we've demonstrated to selectively trap xenon in a MOF can be done at room temperature," said Praveen Thallapally, a materials scientist at PNNL and a corresponding author on the paper. "You pass a mixed gas stream over the MOF materials just one time to capture the xenon and it can be stored long term and easily released for industrial applications when you want to use it."

The paper's authors note that xenon would likely be used more if it was more economical to produce. For instance, they point to reports that show xenon is considered a better surgical anesthetic than the existing technology as it is more potent, less risky, more environmentally friendly and potentially recyclable.

MOFs, while nano-sized, have a high surface area and are full of pores that can suck up gases like sponges suck up water. There are thousands of MOFs that exist and can be created but each need to be tuned or optimized to attract and hold different gases of interest.

Researchers at PNNL, in collaboration with other research groups, optimized the properties of a MOF material called SBMOF-1 and demonstrated that it selectively traps xenon and, in a second pass, can also trap krypton, both of which are byproducts of nuclear reprocessing. Much of this research is funded by DOE's Office of Nuclear Energy to explore technologies that may one day enable safe, efficient recycling of nuclear fuel.

The PNNL team patented its separation process and is interested in partnering with companies to do additional testing or licensing of the technology. For more information on licensing or collaboration contact Sara Hunt.