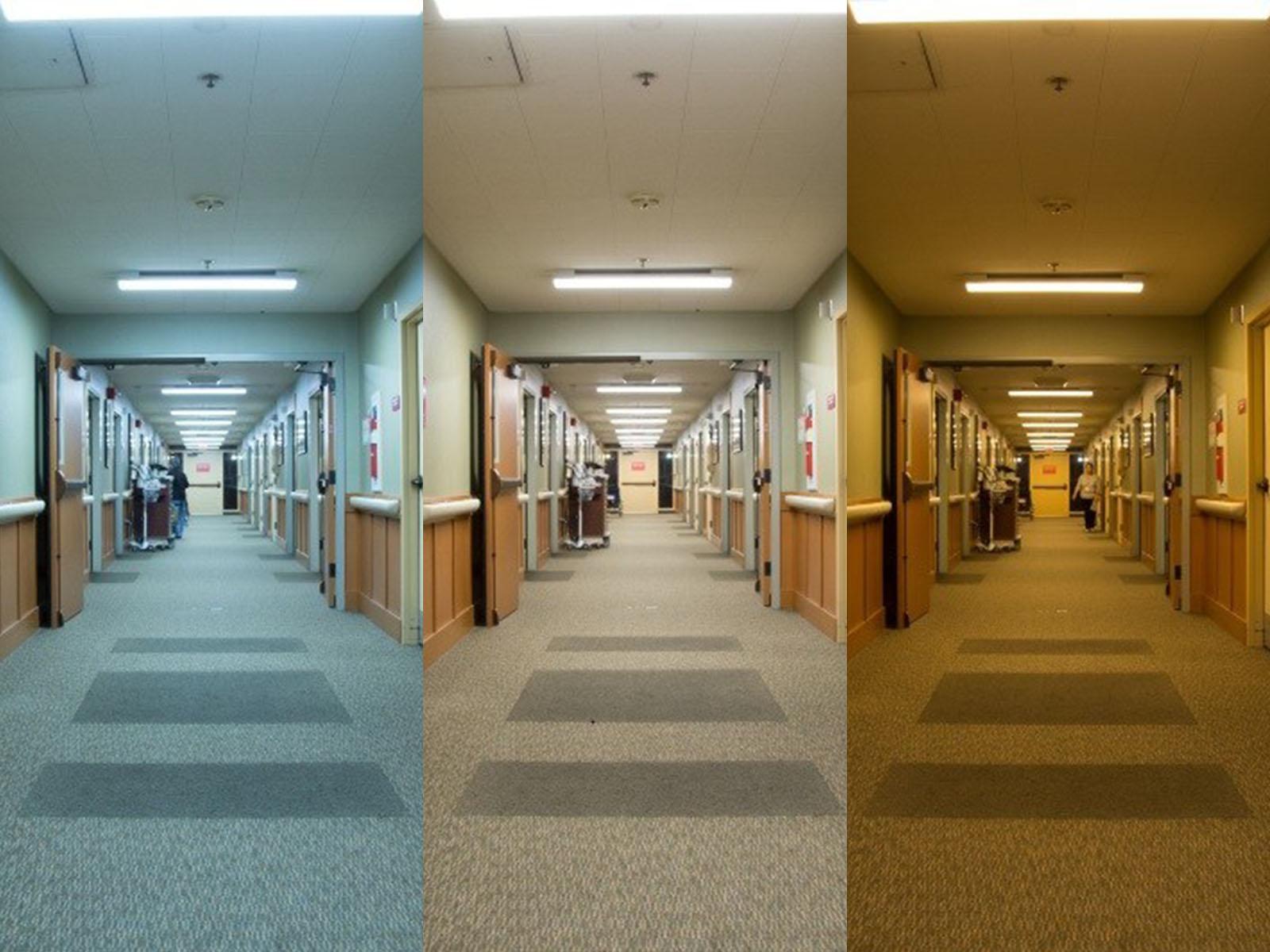 The science of lighting is about more than brightness, efficiency, and cost. Just ask anyone with seasonal affective disorder, or SAD, how gray skies and short days can affect their mood. It turns out that light—the right kind of light, at the right intensity, at the right time—can affect health, wellbeing, and sleep. PNNL recently found consistent results in these sleep quality effects with a study at a nursing home in California.

PNNL lighting experts teamed with the Brown University School of Public Health to evaluate two very different lighting environments at the ACC nursing home in Sacramento. Almost half of the residents studied have a dementia diagnosis. Dementia can disrupt their body clocks, or circadian rhythms and, therefore, sleep.

Tuning up sleep with tunable lighting

“Tunable” refers to the ability to adjust LED light output and the warmth or coolness of the light color—in this case, to more closely approximate a 24-hour outdoor natural light cycle. The advanced lighting system was adjusted to produce a bright, cool ‘blue-white’ light in the morning and a dimmer, warmer light before bed and during the night. The warmth or coolness of white light is referred to as its color temperature.

The lighting system’s intensity was reduced in the afternoon. Then, as evening approached, the light became warmer with more of an amber hue. Finally, at bedtime, the warmer light’s intensity was reduced to 20 percent output. That level provided enough light to keep corridors safe enough for caregivers to check on patients but low enough to minimize the amount of light spilling into bedrooms that can disrupt sleep.

“PNNL’s study focused on measuring and analyzing the amount of light and its spectrum that typically reaches residents’ eyes, which is key,” said Naomi Miller, a lighting designer and scientist who led the study for PNNL. “Since most of the residents use wheelchairs, we used a spectrometer to measure the lighting in a vertical plane, 42 inches off the floor during the day, to capture the light a typical resident would receive at their eyes. At night, researchers angled the spectrometer and lowered it to bed height in the resident rooms as they measured the light filtering from the corridor to a sleeping individual’s eyes.”

How does light affect sleep?

Neuroscientists hypothesize that an early morning blast of blue light helps keep people more alert during the day and leads to better sleep at night, and that very low light levels with a lack of blue light at night helps trigger and maintain sleep.

In the tunable lighting setting, ACC residents got almost no blue light at night and a full output of blue light in the morning, compared to the residents in the static lighting conditions. Brown University researchers, working with nursing staff and a questionnaire called the Sleep Disorders Inventory, determined that residents were sleeping better and longer in wings with the adjusted lighting. The tunable LED lights had a statistically significant positive effect compared to the static lighting. Caregivers also reported improvements in residents’ level of agitation.

The study also highlighted the difficulty of turning the data into circadian metrics. Three circadian metrics software tools are currently used to model indoor light spectrum and intensity and predict the impact of light on a person’s circadian systems. The researchers had hoped this study would also help to determine whether one of the metrics was better than another, but the results were indeterminate.

Impacts of lighting on health

The PNNL/Brown University team is one of the first groups to study the lighting spectra and amounts in detail. More studies will be beneficial to architectural lighting designers. Some designers are using the circadian models to design lighting that is intended to support health. Identifying the best metrics will help moving forward.

“One lesson learned from this ACC study is that wall and floor finishes affect the light and spectrum delivered to the eye, so knowing the color and reflectance of the paint and wallpaper is critical at the design stages,” said Miller. “This is particularly important when the lighting is measured, or calculated, in the plane of the eye, rather than on the horizontal desktop or floor used in conventional lighting calculations.”

The U.S. Department of Energy’s Building Technologies Office sponsored part of this study and similar work. PNNL will continue to collaborate with researchers who investigate the biological response of building occupants to various aspects of advanced, tunable lighting systems in realistic settings. They are currently working with an inpatient behavioral health unit in Colorado and a neonatal intensive care unit in Kentucky.

PNNL is just beginning two new lighting projects with university partners. One project is a collaboration with Emory University’s Brain Health Center and Georgia Tech’s SimTigrate Design Lab on a new center for people with mild cognitive impairment. In the second project, with Harvard Medical School’s Division of Sleep Medicine, researchers are evaluating lighting in four senior care facilities to better understand the impact of light on the elderly.