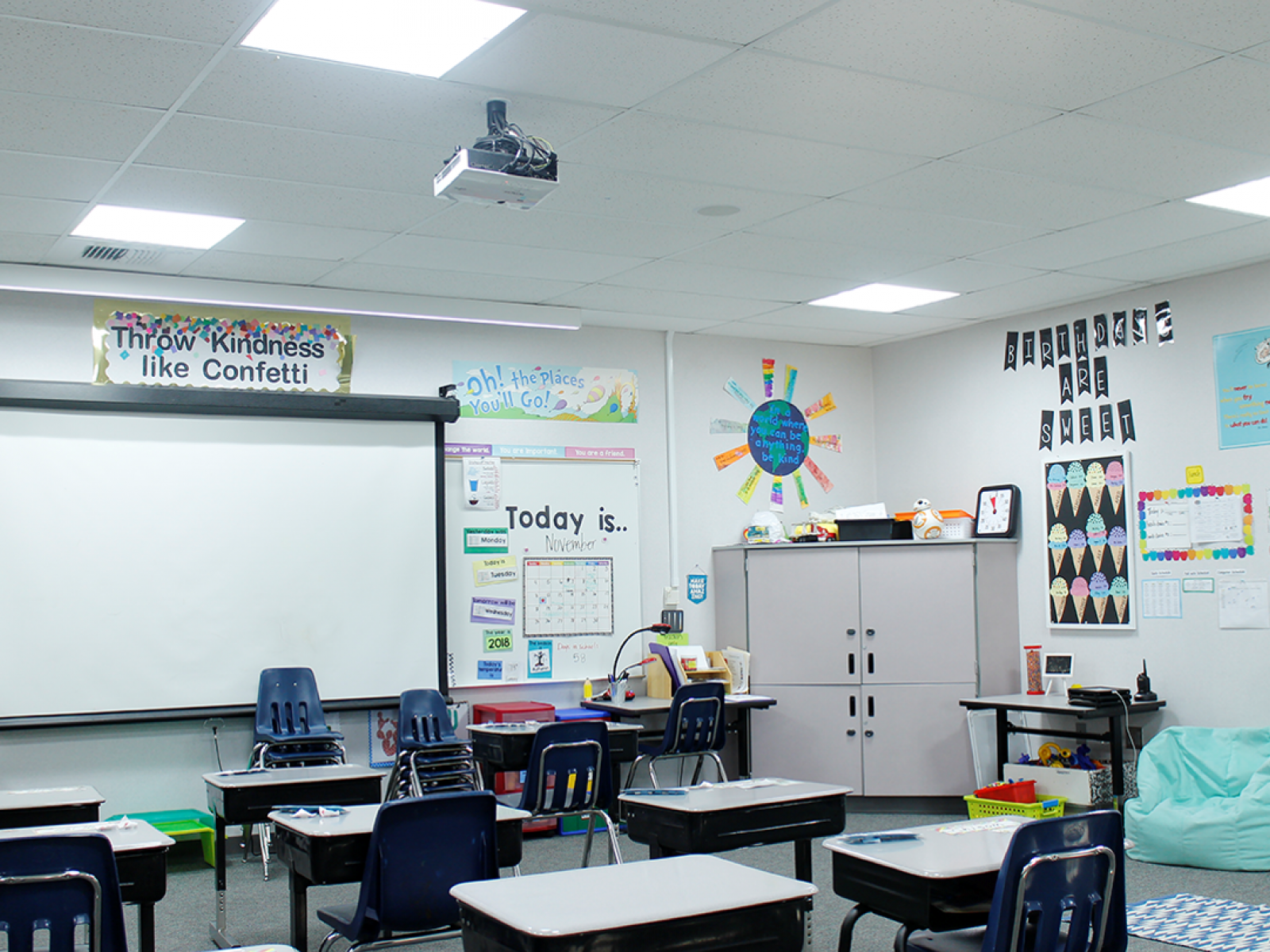 A California school district had a goal – replace costly, inefficient fluorescent lighting in classrooms with adjustable LED lighting systems and evaluate how these systems might save energy and improve the learning environment in traditional and special needs classrooms.

The goal turned into a public utility-backed pilot project with LED lighting systems installed in three elementary school classrooms, reporting energy savings of up to 72 percent.

“This project was an important extension to prior work we’ve conducted as part of our DOE GATEWAY evaluations,” said Robert Davis, PNNL’s technical director for the Advanced Lighting Team and senior staff lighting research engineer. “Our collaborations on tunable LED lighting have included work in senior care, in hospitals, and in schools; this project extended our project portfolio to include a school study with both general education and special needs classrooms.”

An average of $8 billion a year is spent on electricity for schools, representing the second largest expense in education next to paying teachers and staff, the U.S. Environmental Protection Agency (EPA) reports.  If energy costs could be reduced by 25 percent, $2 billion could be saved and invested in hiring nearly 36,000 teachers. About 26 percent of the overall electricity use in schools is from lighting, according to the U.S. Energy Information Administration.

With the immense savings alone, the pilot project tackled lighting changes with a potentially positive adjustment for ASD students.

The pilot project was coordinated, designed and installed by the Sacramento Municipal Utility District and Folsom Cordova Unified School District. In support of the DOE’s GATEWAY evaluation program, PNNL documents the performance of LED lighting systems. GATEWAY provides independent, third-party evaluations of light levels before and after installations, along with color characteristics and energy intensity. In this study, PNNL’s lighting research engineers focused specifically on how the LED lighting system performed in the classrooms in terms of lighting quality, energy savings, and student/teacher response.

The adjustable white LED lighting systems were installed in three classrooms at Gold Ridge Elementary School in the Folsom Cordova Unified School District in Folsom, Calif.  before the start of the 2017-2018 school year. One classroom had 31 fifth-grade students and a teacher. The second and third classrooms each had six ASD students, a teacher, and several aides.

The LED lighting system allows the teacher to control the color and intensity of the classroom light. A touch-sensitive control pad offers five preset lighting condition buttons and three slide bars to deliver varying levels of light to different parts of the classroom. Two slide-bars are dedicated to dimming and a third controls color.

During the first five months after installation, the room controls were limited, only allowing teachers access to on/off and dimming control capabilities. In early February 2018, teachers were encouraged to use any and all light variations they felt were appropriate for their classrooms. 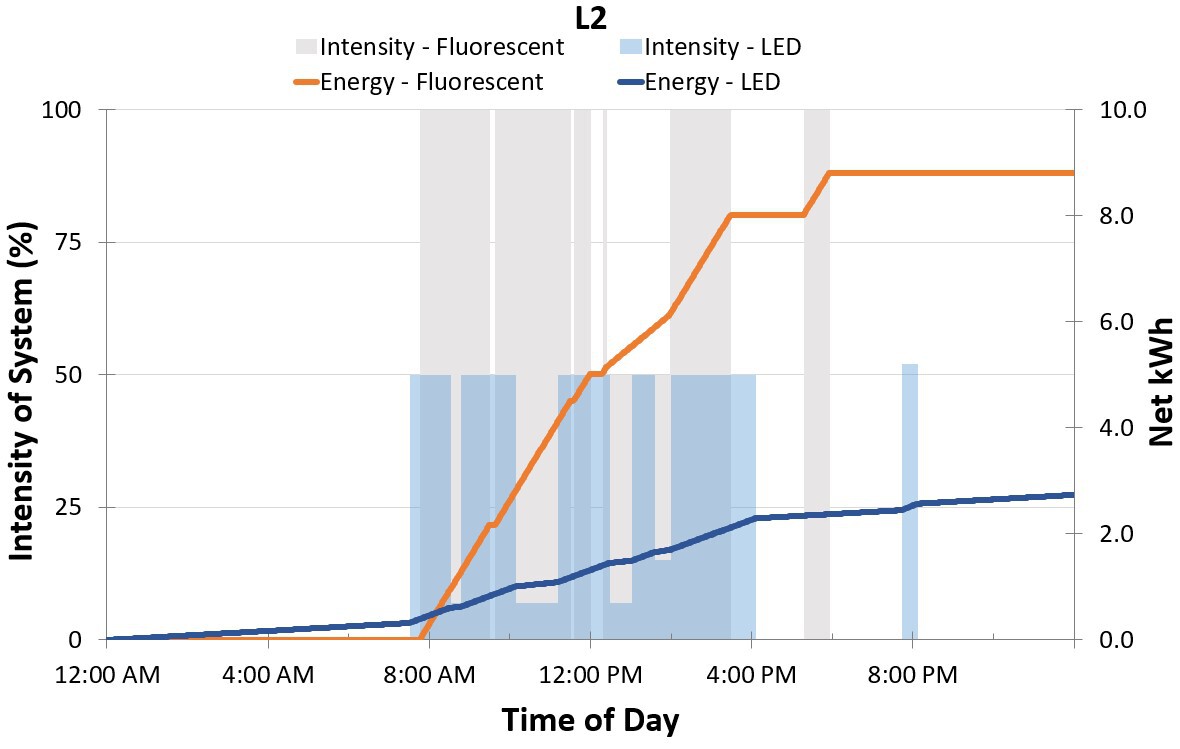 A minimum of 46 percent in potential energy savings is estimated when the adjustable LED lighting system is used at full light intensity. At Gold Ridge Elementary, a typical classroom with fluorescent lights uses 2000 kilowatts versus just more than 1000 kilowatts at full light use with the LED systems. When the LED system is reduced to 52 percent intensity, or just more than 500 kilowatts, the energy savings increases to 72 percent, the research team reports. There were also further energy savings reported from reduced lighting use based on individual teacher preferences to operate the systems at a lower light intensity during certain times of the day.

Metered energy data was recorded for several weeks before and after the LED lighting systems were installed. There was a recorded 48 to 69 percent reduction in daily energy use in the three classrooms.

“Tunable LED systems can dynamically change the intensity and spectrum of light at different times of the day,” said Sarah Safranek, a PNNL lighting research engineer. “In this project, that tunability resulted in over 50 percent energy savings, and the teachers involved felt that the lighting provided an improved learning environment.”

Teachers used the “Calm” setting on the LED lighting system to change classroom light to a low level with warm color temperature. The Calm setting was used at 8:30 a.m. and 1:30 p.m. as a schedule cue for students to redirect their attention to a new classroom activity. The “Energize” setting emits moderate to high levels of light with a cool color temperature and was almost never used by the teachers in the autism spectrum disorder classrooms because the color and intensity of light was uncomfortable.

The study demonstrated how teachers can change the spectrum of light throughout the day to enhance the learning environment for students.

Sacramento Municipal Utility District is continuing to study behavior and sleep patterns associated with lighting and children diagnosed with ASD by initiating a new project with an additional 30 families. The utility district reports that the extension is a result of the positive feedback from the pilot study, which included home lighting changes for three families of ASD students. The new study extends these home lighting changes and evaluations to more families with ASD students from different schools in the SMUD service territory.

The Solid State Lighting program is supported by the Department of Energy’s Building Technologies Office.