Beauty and the Search for Dark Matter 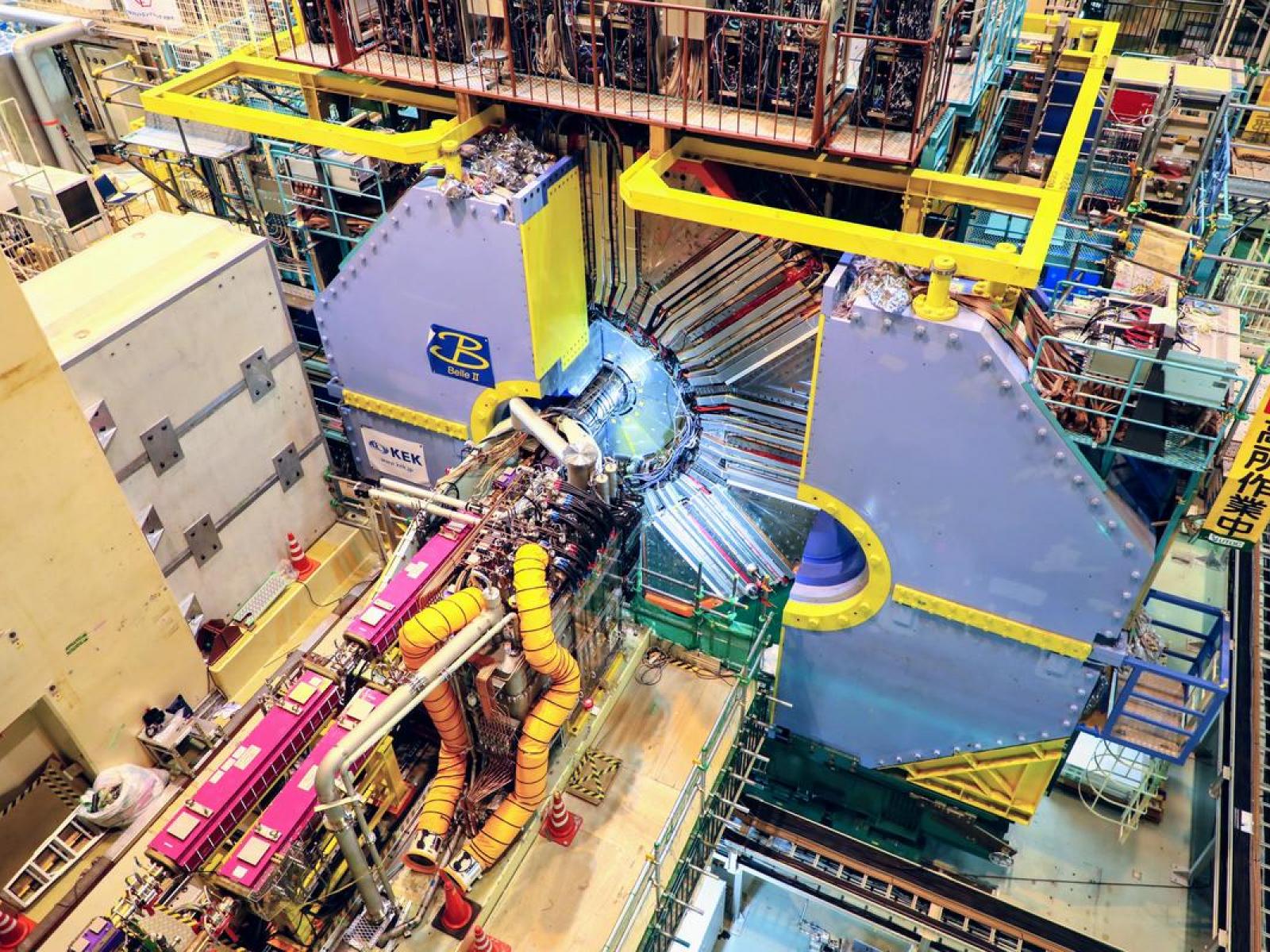 The SuperKEKB accelerator upgrade and Belle II detector, pictured here, have taken nearly 10 years to complete and are expected to operate for about 10 years. The Belle II collaboration consists of nearly 1000 scientists from around the globe. Their Z prime paper is the first of what is likely to be more than several hundred publications covering a wide range of particle physics topics.

After years of planning, building, and calibration, researchers at the Belle II accelerator experiment in Japan have published their first physics paper.

Their seminal work, with contributions from teams of Pacific Northwest National Laboratory (PNNL) researchers, searched for a theorized particle Z’ (pronounced Z prime). This possible particle could decay into dark matter—the large fraction of our universe that we know exists from astrophysical measurements but haven’t yet measured or seen in the laboratory.

Detection of Z prime and other hypothesized dark matter particles in accelerators is difficult; it requires sensitive instrumentation and the ability to collect and categorize enormous amounts of data. Belle II is the second generation of an experiment located at a high-intensity particle accelerator in Japan that crashes subatomic particles at high speeds in an effort to better understand the visible—and invisible—world around us.

Now you see it. Now you don’t

Belle II’s sensitive detectors, developed in part by PNNL, are able to track all of the energy and particles as they decay. With these detailed measurements and enough collisions, researchers look for rare anomalies—instances when energy “disappears” or can’t be accounted for.

“There’s more than one thing that could escape invisibly,” said physicist Lynn Wood, PNNL’s project manager for the work at Belle II. “We subtract the invisible things that we know about, then the things that are left could be the outliers that validate theories.”

A set of theories known as the “Standard Model” predicts known particle interactions with a high degree of accuracy, but particles such as dark matter or the Z prime are not included. If these new particles exist, theorists predict these outlying incidents will happen at a certain rate. If they are not seen in real data, that could represent a flawed theory, or one where the parameters are not tuned to reality.

The challenge lies not only in detection but also in the sheer number of collisions researchers need to understand and interpret. Dark matter decays are often proposed to be so rare that even when the accelerator is working at its maximum rate of several billion collisions per day, researchers might see less than one potential dark matter event per day.

“The Belle II experiment is a complete upgrade from the first Belle experiment,” said PNNL physicist Bryan Fulsom, who has been involved with electron-positron collider physics for more than a decade. Not only does the upgraded accelerator collide particles at a greater rate to collect more data faster, the researcher-redesigned detectors also handle a higher rate of collisions, endure greater radiation damage, and collect signals faster with more detail.

Engaging nearly 1000 collaborators from around the globe, the new experiment began in 2018, to embark on a broad program of new particle searches and precision measurements expected to continue for a decade. The Z prime physics publication is the first of several hundred publications that are expected to be produced by the Belle II Collaboration.

Fulsom cited the “very clean collisions” as the reason Belle II is an ideal experiment to use in the search for particles like the Z prime. When particles collide in Belle II, researchers can measure everything that comes out of the decay and keep track of minute details for an enormous number of collisions.

After searching in the small initial Belle II data set, the researchers found no evidence of the proposed Z prime particle. Although they did not immediately discover the Z prime, Belle II will continue to collect orders of magnitude more data for this and other searches.

Even a non-finding can be good news: ruling out the Z prime particle means that researchers can cross that theory off their list and concentrate their efforts on exploring and validating other predictions. The team at PNNL is currently looking for other ways dark matter may be produced in particle collisions and detected by Belle II.

“This is a process of elimination,” said Wood. “Theorists make charts of possible explanations, and experiments mark out the regions that we can exclude. Negative results put restrictions on what is possible and let us measure for particles with different parameters.”

Ultimately, these and other studies lead to better fundamental understanding to describe the world in which we live in ever greater detail.

“Calling something dark matter is a broad way to say it’s particles we haven’t detected,” said Fulsom. “We don’t know what it is and where we’ll find it, but projects like Belle II have a wide physics and technology reach beyond dark matter.”

For example, the detectors developed for dark matter detection and particle physics experiments can have wide-ranging applications in national security, environmental monitoring, and medical imaging. Electronics for these detectors push the limits of design in specialized as well as everyday electronic tools, and the vast amount of data produced in accelerators requires advances in computing and data handling techniques applicable to other areas of big data research.

And as for dark matter?

“We’re confident it exists,” said Wood. “Everyone is trying to find out what it is.”