All Water Is Not the Same 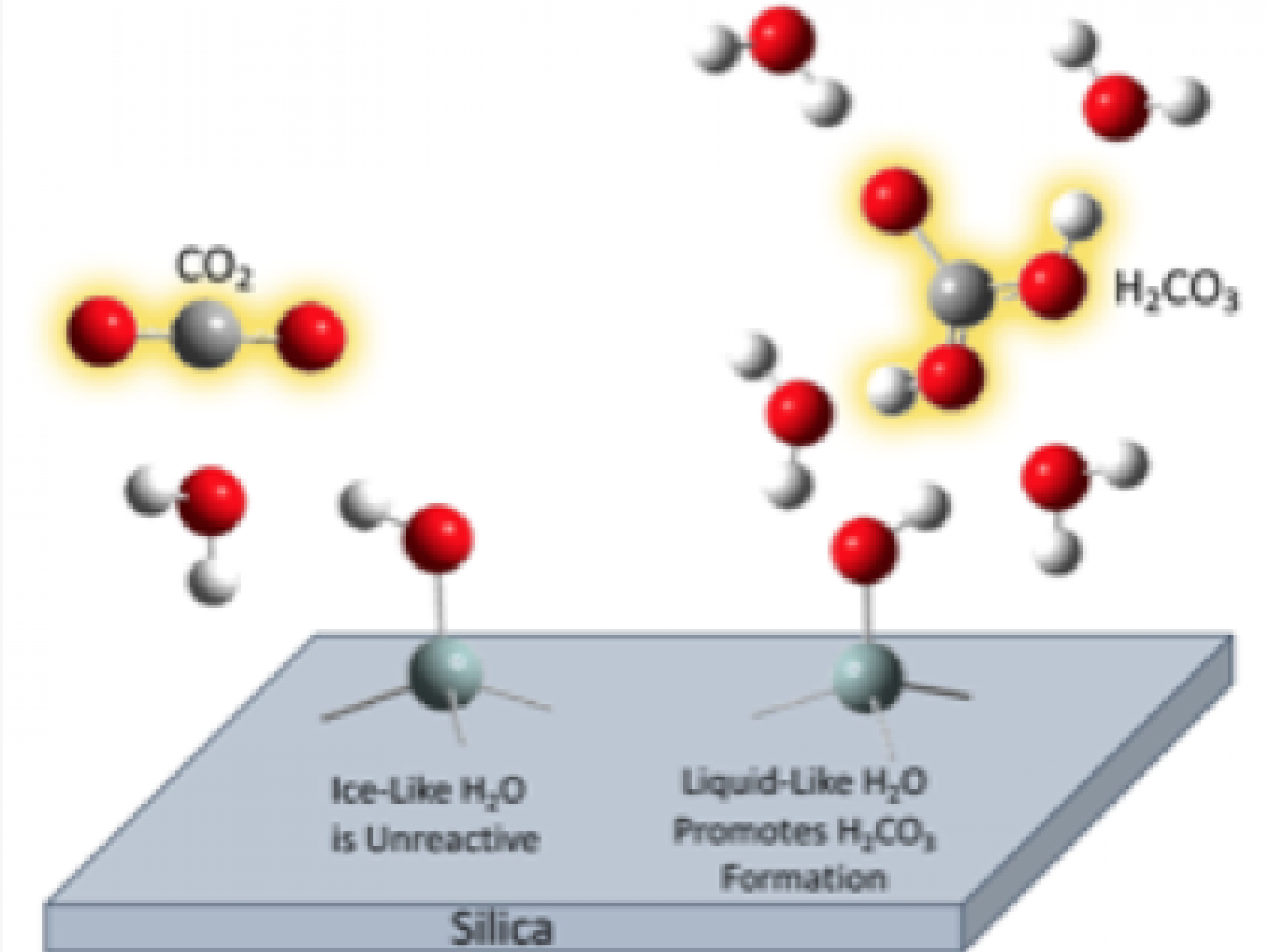 Thin water films on minerals are ubiquitous in nature, reacting with carbon dioxide and changing the surfaces where they rest. Specific reactions depend on the amount of water. Until now, scientists did not know exactly why invisible water films adsorbed to mineral surfaces behave differently than bulk liquids.

A team of researchers led by PNNL chemist John Loring set out to explore what controls reactivity under the unique conditions of these mineral/fluid interfaces. That team is the first to show that the structure of water in adsorbed nano-confined films on silica surfaces controls the formation of carbonic acid (H2CO3), the most geochemically important acid in nature. Their paper, "Water Structure Controls Carbonic Acid Formation in Adsorbed Water Films," was published in The Journal of Physical Chemistry Letters on August 14, 2018.

Why it matters: Adsorbed water films on minerals can be found in environments across a wide range of geochemical settings, pressure, and temperature conditions. But scientists lack a fundamental understanding of the reaction pathways in highly structured water films adsorbed on mineral surfaces, which are distinct from those of bulk water systems. Explaining this reactivity is important in understanding rock weathering, cloud condensation, soil mineral wettability, and metal corrosion pathways.

Summary: The researchers monitored the reactivity of Ångstroms-to-nanometers thin water films condensed onto silica nanoparticles. In these nano-confined water films, the first monolayer of H2O is bound strongly to the mineral surface. At this highly structured, ice-like layer, the researchers found no evidence of reactivity toward the formation of carbonic acid from CO2 and H2O.

However, the team found that the second and third monolayers of adsorbed H2O molecules are less structured. It is these molecules that hold the key to the formation of carbonic acid in thin films on mineral surfaces, likely because these liquid-like waters are less restrained by bonding to the surface and freer to participate in the reaction mechanism to form carbonic acid.

"The more liquid-like water you have, the faster the rate of carbonic acid formation," Loring said.

The experiments were carried out in supercritical carbon dioxide at 50°C (122°F) and 90 bar. Using infrared spectroscopy, the researchers quantified the structure of H2O adsorbed at the surface of fumed silicon dioxide (SiO2) as either ice-like or liquid-like. Then they used oxygen exchange experiments to gauge initial rates of carbonic acid formation as a function of adsorbed H2O concentration. They showed a strong linear correlation between the initial rates of carbonic acid formation and the concentration of liquid-like adsorbed H2O.

What's next? "We now know that carbonic acid readily forms in thin H2O films on silica surfaces," Loring said, "but next, we want to know how much water is required to allow carbonic acid to dissociate." The acid must dissociate to react with and dissolve minerals, for example, and form carbonates.

Acknowledgments: This research enables predictions of complex fluid systems involving interfaces and confinement in the subsurface, (Thrust 1a under Priority Research Direction 1 in Basic Research Needs for Energy and Water, 2017). It also supports goals of improving the efficiency, minimizing the risk, and predicting the long-term fate of injected CO2-containing fluids (Basic Research Needs for Geosciences, 2007).

Supercooled Water Is a Stable Liquid, Scientists Show for the First Time