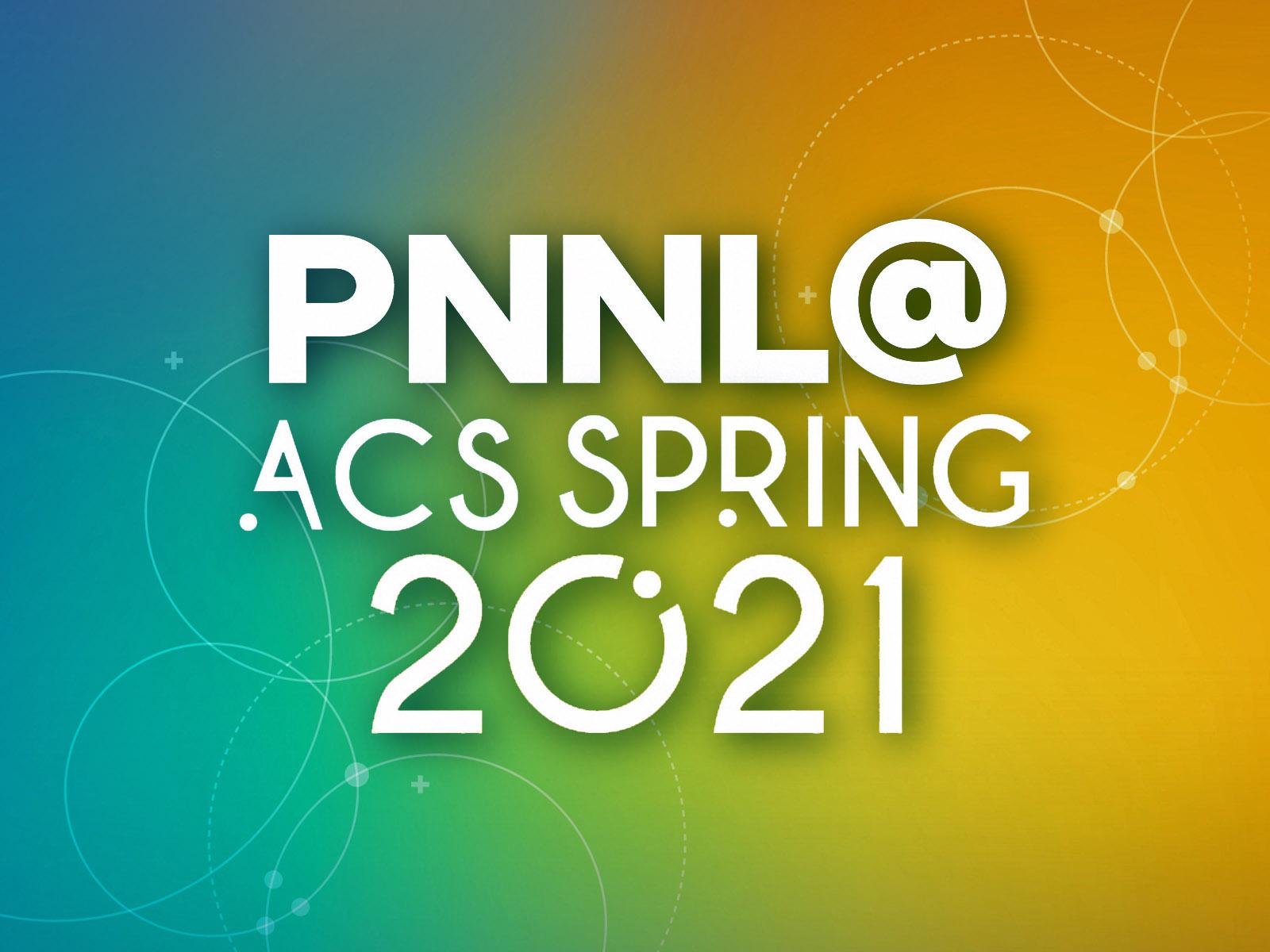 The ACS conference theme is Macromolecular Chemistry: The Second Century and features a mix of live and on-demand presentations, industry thought leader sessions, and posters. The full program of presentations is planned for April 5–19.

More than 30 PNNL researchers will be participating in this year’s event. Below is a list of their presentations and contributing talks.

Seaborg Award Symposium in Honor of Sue B. Clark

Sue Brannon Clark will be honored with the Glenn T. Seaborg Award for Nuclear Chemistry from ACS. Clark was named the deputy director for science and technology at Savannah River National Laboratory in early 2021. She previously served as the chief science and technology officer and a Battelle Fellow at PNNL. At Washington State University, she is a regents distinguished professor of chemistry and holds a joint appointment where she leads a research effort focused on the chemistry and chemical engineering of processing nuclear materials. Read more about the award here.

Battelle Fellow and chemist Johannes Lercher will present on hydronium ions formed at Brønsted acid sites in the presence of water in zeolite pores of all sizes. The size of these clusters appears to depend on the pore size and is limited by the entropy loss compared to condensation outside the zeolite pores. The remaining pore space is empty in the sole presence of water. Molecules sorb in the space between hydronium clusters and may also partly substitute for water in the cluster forming the hydrated hydronium ion. Their catalytic activity is determined by the steric environment and the impact on the excess chemical potential of reacting substrates stabilizing ground and transition states to different degrees. Examples illustrating the impact of hydrated hydronium ions include the dehydration of alcohols, the alkylation of aromatic molecules, and hydrogenation on zeolite-supported metal nanoparticles.

In situ investigations of geochemical, extremophile, and catalytic systems by high-pressure and high-temperature MAS-NMR

Eric Walter will present on the development of a high-pressure magic-angle spinning (MAS) rotor design (the “WHiMS” rotor), which has allowed NMR data to be obtained at pressures up to 400 bar at 20 °C or 200 bar at 250 °C. These cavern rotors use a polymer bushing that snaps into position and are then locked by a retaining screw. Sealing is performed by O-rings that also form, with modification of the O-ring grooves, an integral one-way check valve. Rotor pressurization only requires them to be placed in a closed pressure vessel at pressure—mechanical manipulation of the rotor valve is not required. This rotor design has enabled experiments on a wide variety of mixed-phase (solids-liquids-gases) samples. Example data from both abiotic and biotic systems will be highlighted. Coauthors include Hardeep Mehta, Jesse Sears, Sarah Burton, John Loring, Ying Chen, Nancy Washton, and David Hoyt.

Reactive separations of CO2 with high atom and energy efficiency

Chief scientist David Heldebrant will describe an integrated approach that couples capture and catalytic conversion of CO2 captured in carbon capture solvents with the aim of designing more energy- and atom-efficient reactive separations to produce low-carbon fuels and chemicals such as methane or methanol with high atom and energy efficiency. This approach marginalizes the costs of disparate processes of capture and conversion by using capture infrastructure for both processes. Coauthors include Jotheeswari Kothandaraman, Johnny Saavedra Lopez, Yuan Jiang, and Robert Dagle.

Radiochemistry and its applications in radioactive waste management and nuclear security

Sue Clark will present an overview of radiochemistry in complex systems ranging from groundwater to separations to radioactive waste processing streams. Using multi-modal experimental approaches that include a strong theoretical foundation is resulting in a remarkable ability to understand behavior and chemical dynamics of ions in these systems. This knowledge is being applied to enable new approaches to radioactive waste processing and environmental monitoring.

Chemical engineer Fan Lin will address the challenges of biomass-derived feedstocks. He and his coauthors report on a deep understanding of the impact of K on a bifunctional Pt/TiO2 catalyst, which is an efficient catalyst for ex situ catalyst fast pyrolysis (CFP). The researchers simulated the K-poisoning of Pt/TiO2 catalysts by purposely loading different amounts of K (100–6,000 ppm by weight) on the catalysts. A series of characterization approaches (XRD, ICP, BET, FTIR, chemical titration, and TEM) were combined with kinetic assessment of multiple probe reactions to elucidate the mechanism of Pt/TiO2 deactivation by K accumulation. Coauthors include Yubing Lu, Yong Wang, and Huamin Wang.

Characterizing technetium and plutonium in subsurface sediments for contaminant remediation

Chemist Carolyn Pearce will lead this presentation on the release of Technetium-99 (Tc) and plutonium (Pu) to the subsurface worldwide, including at the Hanford site in Washington State. Sediments from Hanford waste disposal sites have been selected, based on historical information and sediment composition, for characterization of Tc and Pu sediment associations. From preliminary results of a study, it is suggested that Pu and Am have limited mobility within the soil profile and that stimulation of conditions that enhance Tc attenuation can be used to improve long-term Tc remediation strategies. Coauthors include Sue Clark, Hilary Emerson, Kirk Cantrell, Michelle Snyder, May-Lin Thomas, Sarah Saslow, Dallas Reilly, and Vicky Freedman.

Lab Fellow and chemist Samuel Bryan will present on a developed spectroelectrochemical sensor that combines spectroscopy, electrochemistry, device fabrication, thin film technology, and synthetic inorganic chemistry. This sensor has been demonstrated on a variety of chemical systems including authentic radioactive waste samples. Specific examples of analyte detection including ferrocyanide, technetium, and ruthenium will be presented. Coauthors include Sue Clark, Shirmir Branch, and Amanda Lines.

Chemist Xin Zhang will share PNNL’s examination of Cr(III), an abundant species in tank waste, as an adsorbate on boehmite particle surfaces. Results showed that the dissolution rate of the Cr(III)-adsorbed boehmite is several times lower than that of pure boehmite, with a dissolution activation energy (Ea) that is 16 kJ mol-1 higher. The behavior is tentatively attributed to an armoring effect by adsorbed Cr(III) that reduces the number of dissolution-active sites on particle surfaces, a hypothesis currently under examination with high-resolution electron and scanning probe microscopies. The findings should help improve kinetics models and ultimately provide a stronger foundation for the development of robust waste processing strategies. Coauthors include Carolyn Pearce, Zheming Wang, Sue Clark, and Kevin Rosso.

Materials scientist Michel Sassi will discuss examinations conducted to improve the fundamental understanding of physical phenomena occurring in TPBARs during irradiation. Researchers found that tritium trapping allows recovery of a significant amount of the formation energy cost of cation vacancy, while the trapping of tritium by anion vacancies further increases the energy cost of forming a vacancy. The simulations also indicated the potential for tritium to be trapped in various forms by forming bonds such as Al—T, O—T or T2. These results raise further questions regarding the speciation and dynamics of tritium trapped in nanovoids. Coauthors include Steven Spurgeon, Bethany Matthews, Arun Devaraj, and David Senor.

Bioenergy scientist Dan Gaspar will detail how diesel fuel and blendstocks produced sustainably from low-carbon feedstocks have the potential to improve the performance of conventional and advanced diesel engines. To realize these potential benefits, a tiered screening process was developed and used to efficiently screen thousands of candidate blendstocks potentially derived from waste or biomass.

Chemist Tim Bays will discuss how increasing alcohol cluster size correlates with increasing fuel vapor pressure. A combination of nuclear magnetic resonance diffusion experiments and molecular dynamics simulations were used to determine the effects of temperature and water on hydrogen-bonding structures in a hydrocarbon with ethanol. The results suggest that small differences in water content can influence oxygenate clustering and vapor pressure, offering molecular-level insights into the origins of this non-ideal behavior that are generally unavailable using thermodynamic ensemble-based modeling approaches.

Chemical engineer Johnny Saavedra Lopez will present research findings on controlling the molecular structure (e.g., degree of branching) of iso-olefins produced from oligomerization of light olefins as a tool for tuning the final composition of hydrocarbon fuels and targeting specific fuel properties. In this study, researchers demonstrated that the degree of branching of iso-olefins obtained from butene oligomerization can be controlled by tuning process conditions and by choosing the proper catalyst. Coauthors include Dan Gaspar, Robert Dagle, Vanessa Dagle, and Cheng Zhu.

Research associate Kristen Campbell will present the finding of a study evaluating an oxygenated blendstock. Campbell and chemist Leila Cosimbescu’s work provides useful information when a new component is introduced into fuel formulation.

Chemist Grant Johnson is presenting on scalable synthesis of size- and composition-selected clusters with applications in catalysis, energy conversion and storage, and chemical separations. Johnson will share research findings that advance the mechanistic understanding of the size-selective synthesis of clusters in the subnanometer size regime where “each atom counts” toward tuning the properties of clusters for eventual applications. Coauthors include Michael Ligare and Nirajan Govind.

Role of interfacial structure and dynamics in driving non-classical crystallization

Computational scientist Maria Sushko will share research on the relationship between nanoparticles that nucleate randomly and aggregate to form extended structures through Brownian motion in the presence of long-range attractive interactions. The research demonstrates that crystallization pathway selection can be manipulated by modifying solution pH and precursor concentration through shifting the balance of chemical potentials of solution species and discussing the nature of interfacial forces driving particle attachment via neck formation or reorientation and diffusive jumps in a lattice matching configuration. Coauthors include Guomin Zhu, Lili Liu, Elias Nakouzi, Kevin Rosso, and James DeYoreo.

Rajendra Prashad Joshi, a postdoctoral researcher in modeling and simulation, will present on the novel graph-based generative model that can take 3D structure coordinates of the molecules as an input and generate 3D coordinates of novel candidates as an output while always preserving the desired scaffolds in generated molecules. The model generates predominantly valid, unique, novel molecules that have drug-like properties similar to the molecules in the training set. The model also performs well for relatively small volumes of training data and generalizes equally well for generating the molecules with any new scaffolds, thus making our model applicable in different domains. Coauthors include Mridula Bontha, Mercedeh Khazaieli, Rhema Mary, and Neeraj Kumar.

Earth Scientist Kelly McHugh will describe the first exploration of a uniquely engineered, ordered host framework utilized for promoting thermal ionization for mass spectrometry (TIMS). This aluminum-based scaffold has known affinities for rare Earth metals such as neodymium (Nd) and can incorporate the high work function metal rhenium (Re). In contrast to other approaches for increasing ionization, such as resin beads and Pt-Re porous ion emitters (PIES), sample preparation is simplified, accelerated, and made more reliable by loading the sample in a suspension that is absorbed to the activator. Coauthors include Dushyant Barpaga and Michael Sinnwell.

Chemist Mowei Zhou will lead a presentation on research by a consortium of national laboratories to target the SARS-CoV-2 non-structural protein 15 (nsp15), a uracil-dependent endonuclease that is believed to cleave viral RNA and evade host immune responses. The consortium searched compound libraries containing registered drugs and those that passed initial phases of clinical trials. Positive hits against nsp15 can be potentially repurposed for COVID-19 with minimal development time. A high-throughput fluorescence resonance energy transfer (FRET) assay was developed to screen the inhibitory effect of candidate compounds, which narrowed down the selection to 15 compounds. Coauthors include Jesse Wilson, Neeraj Kumar, Rhema James, and Garry Buchko.