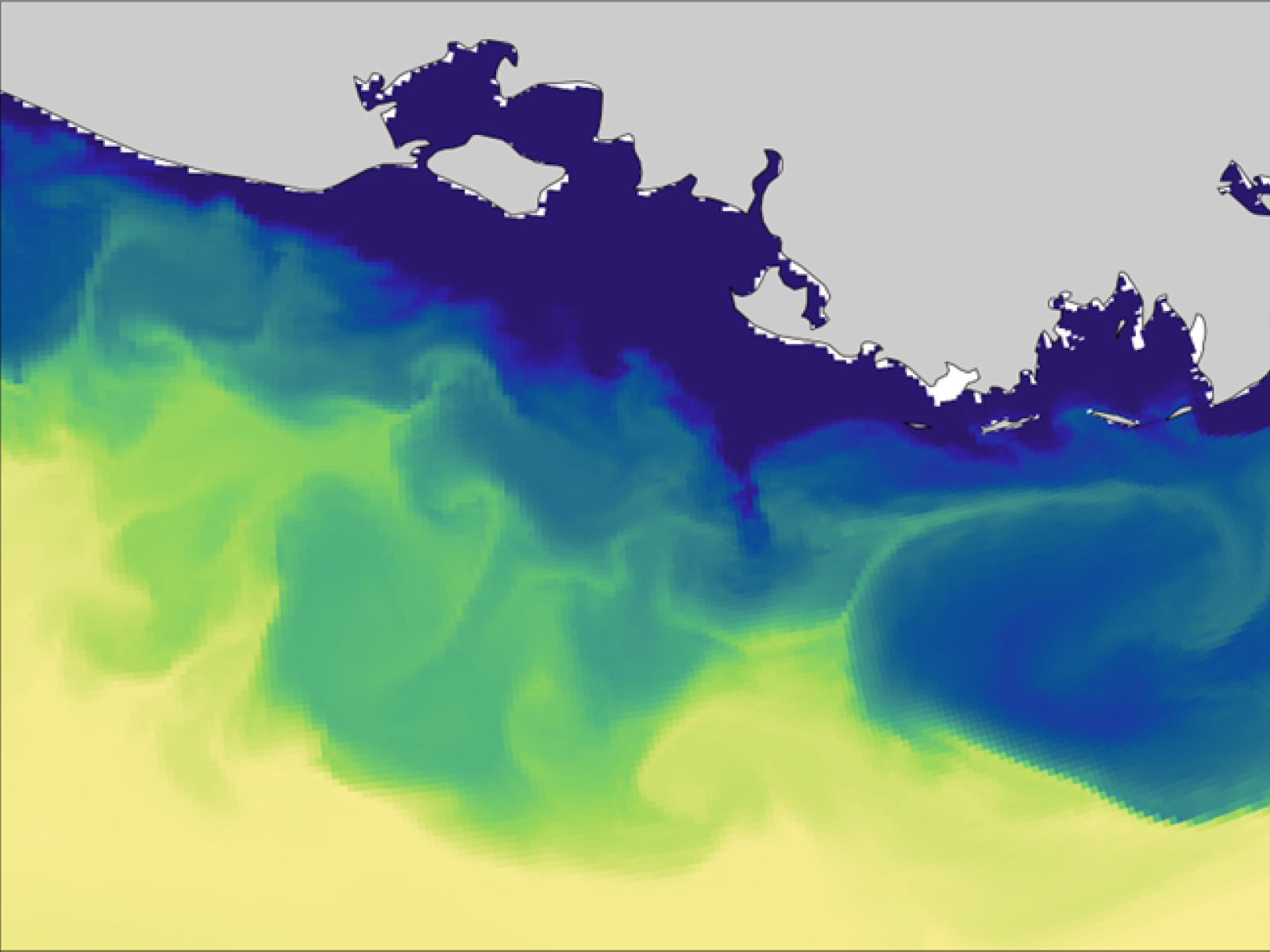 Salinity fronts caused by fresh water inputs from the Mississippi and Atchafalaya rivers are dynamic and sources of strong vertical motion and intense mixing.

Different oceanic water masses that have temperature or salinity differences are separated by fronts. These fronts can be quite narrow and include strong vertical motion as water parcels move up or down the boundary between the water masses. This study identifies one mechanism that pushes water from the surface into the ocean interior as arising from the interactions between movements in the fronts and the land-sea breeze. Water on the dense (in this case saltier or colder) side of the front is pushed down into the ocean interior, whereas water on the light (fresher or warmer) side of the front is pulled up. This generates a strong vertical exchange of water at the front.

The strong vertical motions at fronts can carry minor seawater constituents, such as plankton, nutrients, and oil droplets, into the ocean interior. These vertical motions also enhance mixing in regions too deep for direct wind mixing. The upward motion on the fresh side of the front can draw the low-oxygen bottom waters found in the “Dead Zone” to the near surface, providing a mechanism for ventilating these bottom waters.

In the northern Gulf of Mexico, the fresh Mississippi/Atchafalaya river plume generates strong density fronts. These fronts are known pathways for exchanging water between the ocean surface and the deep. Using high-resolution ocean observations and numerical simulations, researchers demonstrate how the summer land-sea breeze generates rapid vertical exchange at plume-generated fronts. They show that the interaction between the land-sea breeze and the fronts leads to convergence/divergence in the surface mixed layer. The convergence/divergence further facilitates a slantwise circulation that moves surface water down into the ocean interior and upwells bottom waters to the surface. This process causes significant vertical displacement for the water parcels and creates a ventilation pathway for bottom water in the northern Gulf. This bottom water ventilation path can bypass the stratification barrier associated with the Mississippi/Atchafalaya river plume, potentially impacting the dynamics of the region’s dead zone.

This research was supported by the U.S. Department of Energy, Office of Science, as part of research in the MultiSector Dynamics, Earth and Environmental System Modeling Program.

Improving snow albedo modeling in E3SM land model (version 2.0) and assessing its impacts on snow and surface fluxes over the Tibetan Plateau