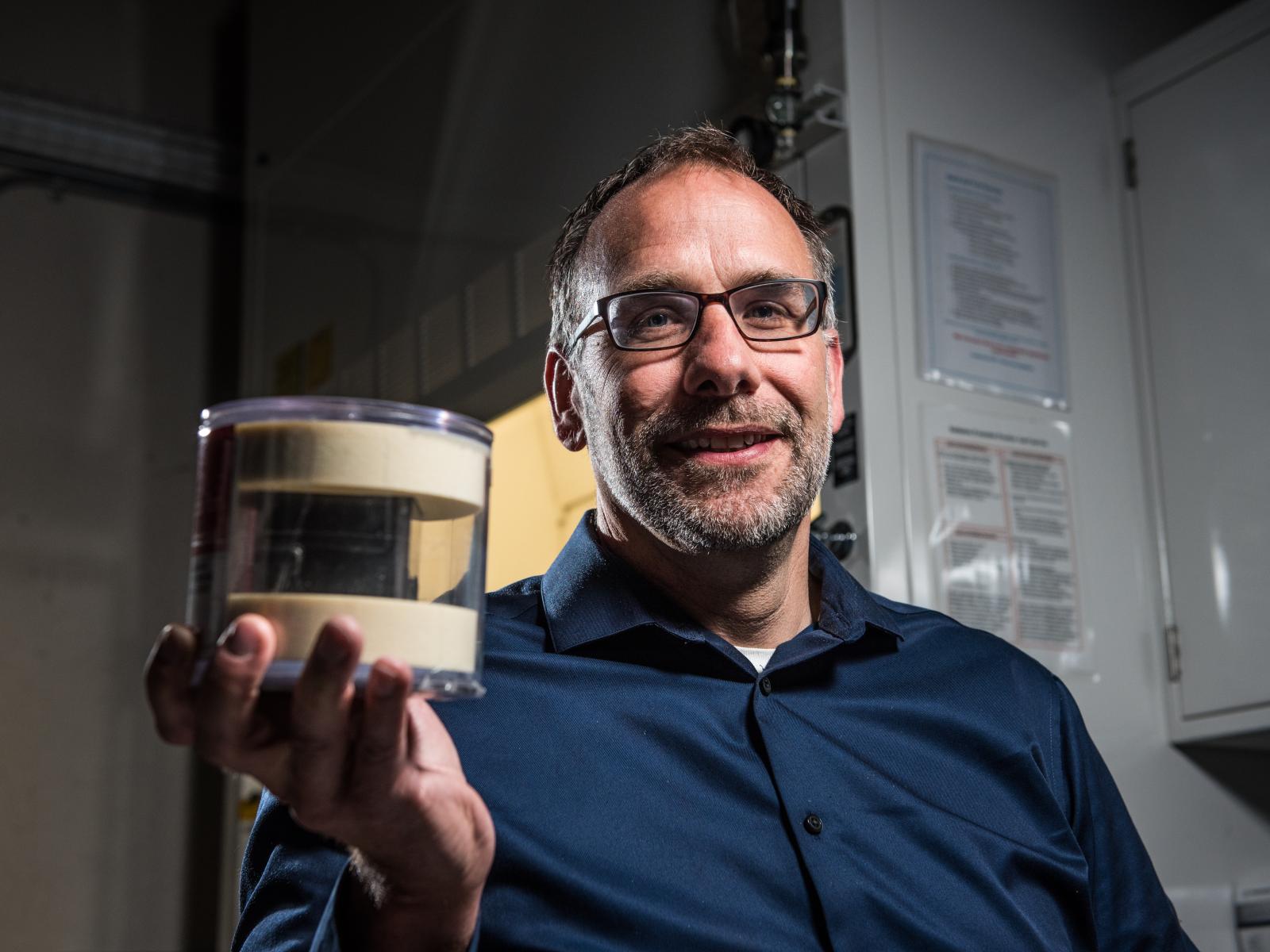 Nuclear forensics scientist Jon Schwantes holds up the uranium cube believed to be a Heisenberg Cube.

Since PNNL has its roots in Hanford and the Manhattan Project, perhaps it’s fitting that the laboratory has a relic of Nazi Germany’s early attempt at a nuclear weapons program. PNNL has what’s believed to be a Heisenberg Cube and uses it to help train international border guards to detect illicit nuclear material movement. Recently, the cube attracted the attention of Physics Today, which recounted the history and locations of the few known cubes in a story titled: Where in the world are Nazi Germany’s uranium cubes?

During World War II, the United States’ secret Manhattan Project was racing against the Nazis to develop a nuclear reactor. The Manhattan Project included the Hanford plutonium production site at Hanford in Washington State, near the PNNL campus.

As the Allied Forces began moving into German-occupied territory, an American military/scientific team led by General Leslie Groves was on a mission to find out just what Germany had accomplished in terms of nuclear reactions.

Groves, the man who established Hanford as a location for the U.S. plutonium production and has a park named for him just down the road from PNNL, code-named the mission Alsos, which is the Greek word for Groves. Alsos discovered that the German plans involved creating a reactor with hundreds of uranium cubes – about two inches on each side and weighing about five pounds – suspended on cables.

German physicist Werner Heisenberg led one of the teams developing a viable reactor design that never sustained a critical reaction, and thus the cubes seized by the Alsos mission in Haigerloch, Germany in 1944 are referred to as Heisenberg Cubes. A separate, lesser known research team, based in Gottow, Germany and led by Kurt Diebner, was also working to develop a viable reactor design based on the same cubes, but a smaller number of them.

The Alsos team was successful in confiscating most of the cubes from Heisenberg’s team, while the hundreds of cubes from Deibner’s team remain unaccounted for to this day. Even the majority of the cubes that were captured by the Alsos team and brought back to the United States are largely unaccounted for. According to the Physics Today article, there are only a handful of cubes that have been identified in the United States and Germany – one of those is believed to be at PNNL.

Retired PNNL scientist Dick Libby recounts that the PNNL cube was in safekeeping at Department of Energy headquarters in D.C. in about 1989 when Bill Cliff, who is also retired, suggested that the cube could be used in the Radiation Academy training PNNL leads for the State Department and others.

Cliff was the program manager for RADACAD, a set of hands-on training courses for international border guards that cover detection and interdiction of illicit traffic of radioactive materials. These courses have been presented to officials from more than 73 countries. The RADACAD courses include observational and hands-on activities that involve the use of radioactive materials to demonstrate the proper use of radiation detection equipment.

That’s where PNNL’s Heisenberg Cube comes in – it’s used as a radioactive source for a variety of nonproliferation courses conducted at the nearby DOE HAMMER facility.

“The cubes are made of solid natural uranium metal,” said Richard Pierson, who is a RADACAD instructor and environmental health and safety manager at PNNL. “While it serves as a detectable radiation source to train border personnel with, it’s primarily self-shielded by the dense material itself, and is specially packaged to assure it is safe to work with.”

Research for nuclear and radiological security

“It’s a prop that exemplifies the kind of material that might be trafficked to support the development of a nuclear program,” said Schwantes.

He and Pierson repackaged the cube a few years ago and took that opportunity to shave off tiny bits of the metal for future analysis designed to ultimately confirm the history of the PNNL cube. Schwantes plans to complete that analysis this summer and also is working with the University of Maryland to confirm the age of a cube in its possession. A UM research team wrote about the known history of its cube in the same issue of Physics Today.

In 2002, a PNNL scientist conducted nondestructive analyses on the cube to estimate its age, but the results were inconclusive. Analysis of the actual shavings should lay the question to rest. However, based on lore and also many chemical and physical measurements and features of the cube such as notches for hanging on the cables, both Schwantes and Pierson are confident it is a Heisenberg Cube created by scientists working for the Nazis in the 1940.

“It’s interesting that a nearly 80-year-old relic of a developing nuclear program is used today to help thwart nuclear nonproliferation,” said Pierson. “We’re privileged to be stewards of this historical specimen and have it serving a useful purpose as well, all these many years later."