Where Liquid Meets Air: Seeing the Details of Light, Dark, and Water 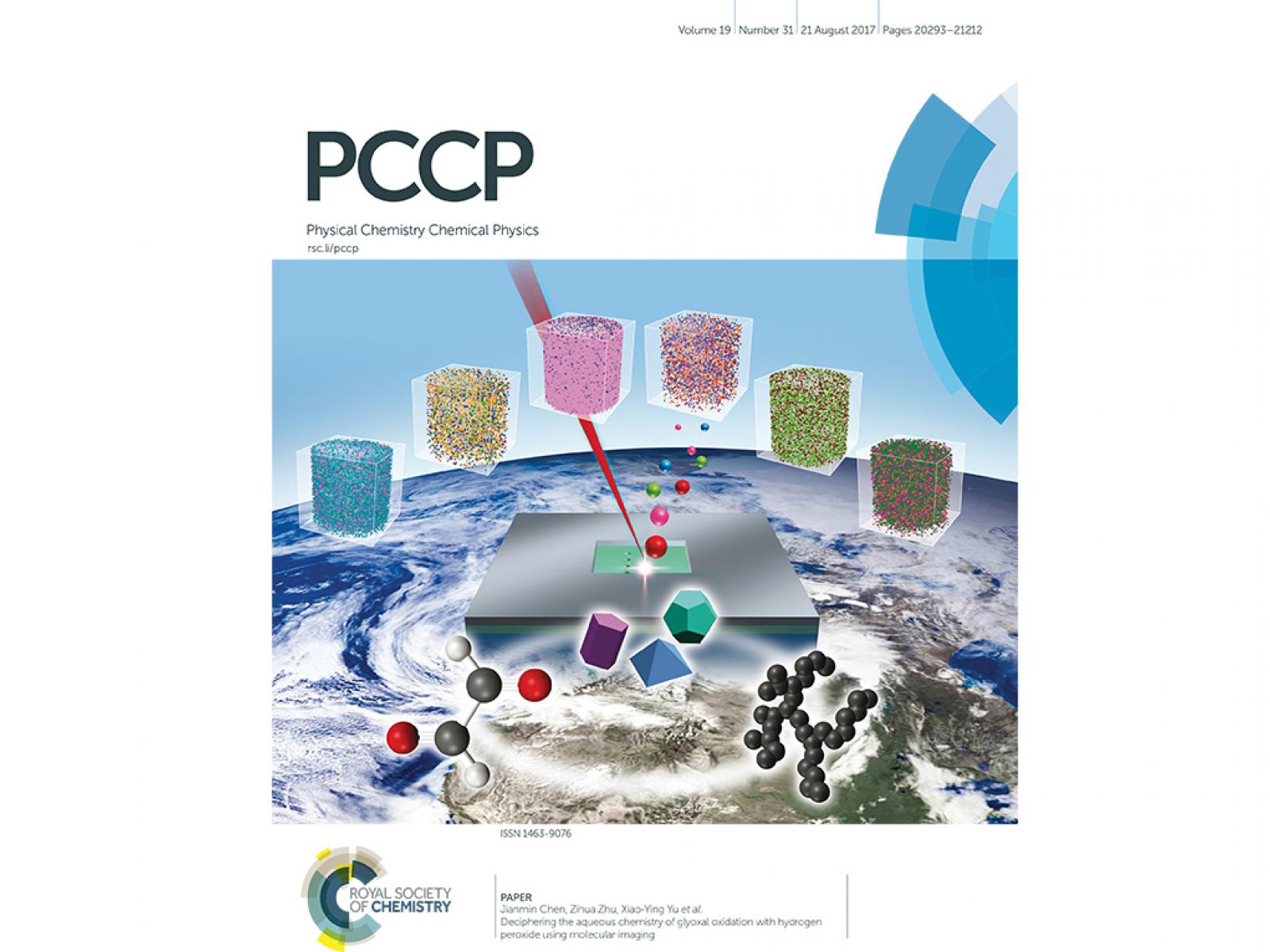 The research graces the cover of Physical Chemistry Chemical Physics. Cover reproduced with permission of the authors and the Royal Society of Chemistry (see reference).

Imagine a tiny drop. It contains water, the fizzy antiseptic hydrogen peroxide, and a common, yellowish chemical called glyoxal. When the droplet is exposed to light, a cascade of reactions occurs, producing new materials. These reactions occur on the surface, where liquid meets air. Scientists didn't have many details about the reactions until Dr. Xiao-Ying Yu from DOE's Pacific Northwest National Laboratory and her colleagues took up the challenge. They got the details using an imaging mass spectrometer that typically boil liquids away in vacuum. They found that the reactions don't stop when the light fades. They also saw how the resulting products mixed on the surface and reacted with more than 40 water clusters.

"Computer models can track about 10 to 12 clusters," said Yu, the corresponding author on the study. "We observed over 40 clusters in liquid. We were able to see how the chemical products change the microenvironment, creating larger water clusters."

"In models, it isn't easy to see what mixes at the surfaces. We provided a glimpse of what's really at the surface -- or the mixing state that is important to interfacial changes."

Why It Matters: Meeting the demand for energy through new fuels, energy efficiency and carbon sequestration requires knowing how materials form to, in turn, control that formation and produce materials by the boxcar and barrel. This study offers insights into how chemical building blocks -- glyoxal, water, and hydrogen peroxide -- chain together, or nucleate, to form materials. In addition, the work offers insights into nucleation reactions involving glyoxal in the air. In the atmosphere, these reactions lead to particles that affect cloud formation and climate.

Summary: Many of the steps are known in using glyoxal with hydrogen peroxide to form dicarboxylic acids and chains of hydrocarbons, known as oligomers. These oligomers are also the starting materials for troubling atmospheric aerosols, known as secondary organic aerosols. The problem was that not all of the steps were known and that one desirable instrument, secondary ion mass spectrometry (SIMS), couldn't be used to track the products formed. It wasn't possible to use SIMS on a liquid sample. That's where SALVI comes in. Formally known as the System for Analysis at the Liquid Vacuum Interface, SALVI lets imaging instruments such as SIMS study liquids exposed to air. With the SALVI and SIMS combination, researcher can follow the reactions in real time and in a realistic environment.

The chemical nucleation reaction is kick started by ultraviolet light. With the SALVI, which is small enough to fit in the palm of your hard, set inside the SIMS, the team examined what happened when the chemicals received ultraviolet light for up to 8 hours.

Using SALVI in SIMS, located at DOE's EMSL, the team also created a chemical spatial map of the air-liquid interface. That is, they identified the chemicals and their location in tiny divots on the liquid's surface. "In models, it isn't easy to see what mixes at the surfaces," said Yu. "We provided a glimpse of what's really at the surface -- or the mixing state that is important to interfacial changes."

As an added bonus, SALVI let the team observe 43 to 44 water clusters in the sample. Typically, computational models run on supercomputers model 10 to 12 water clusters. In seeing the clusters, the team determined how the chemical products created an increasingly hydrophobic surface that, in turn, pushed the water together and created larger water clusters. "SALVI is the only technique that can provide molecular mapping of water clusters and ion clusters in liquid to the best of our knowledge," said Yu.