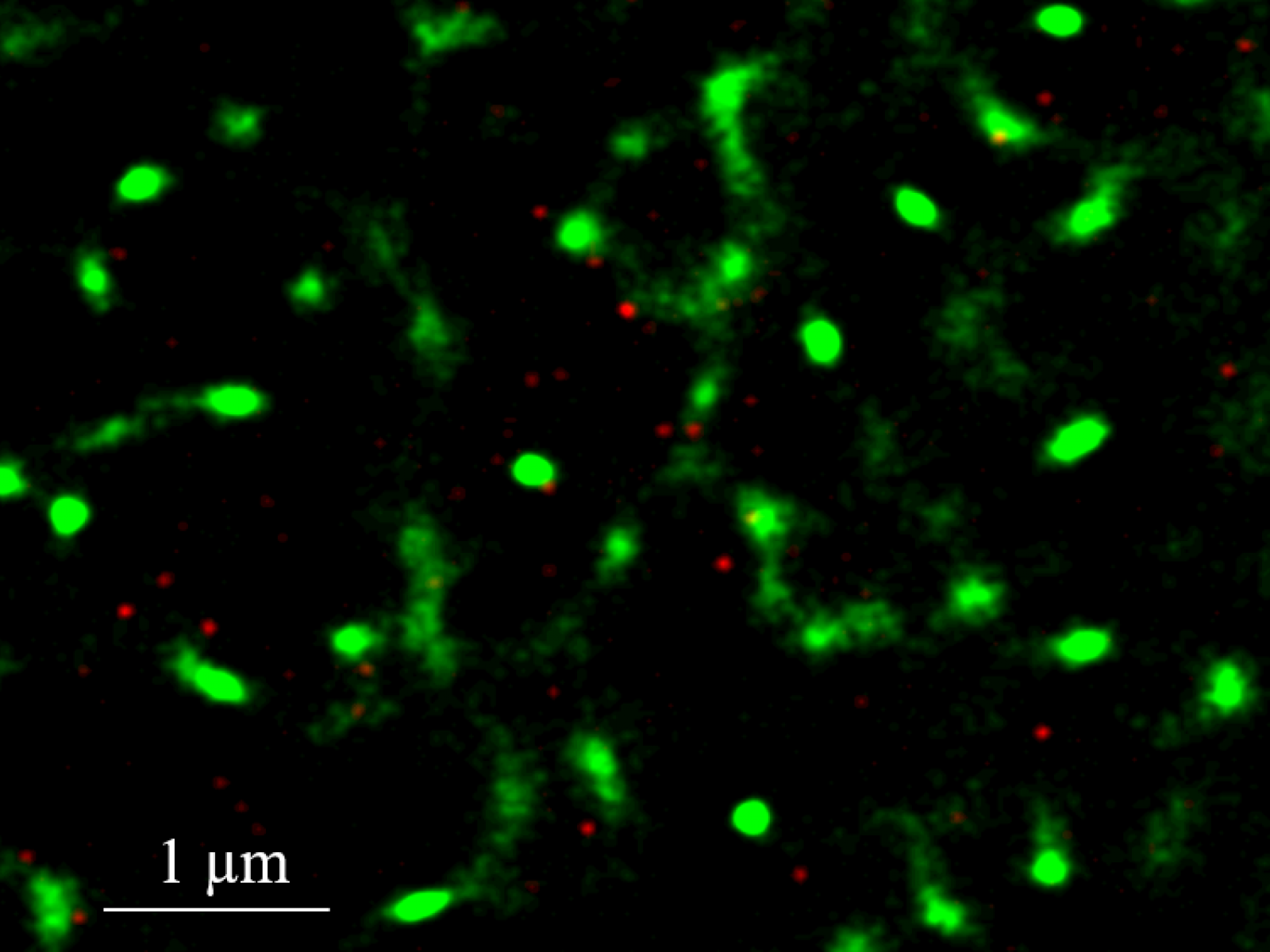 Using a super resolution fluorescence microscopy technique, called STORM, the fate of nanoparticles (red) inside intact cells can be studied with nanometer resolution. Some of the nanoparticles enter the cell via clathrin-coated vesicles (green), as indicated by their proximity.

Investigating nanomaterials represents an extreme challenge of scale. Vanishingly small, nanomaterials are made of particles less than 100 nanometers across. A nanometer is one-billionth of a meter. A sheet of paper, by comparison, seems grossly thick: 100,000 nanometers wide.

They are ancient and natural, part of Earth’s landscape for at least 4.5 billion years. Sand, for instance, is a nanomaterial created by erosion. However, nanomaterials are also creatures of the Industrial Age. For the last 250 years, they have been unintentionally shed into the air, water, and land as a result of mining, farming, manufacturing, transportation, and other human activities.

In the past 50 years or so, nanomaterials have been intentionally engineered to leverage their distinct chemical, physical, and electrical properties. Ranging from medicine and cosmetics to energy and aerospace, nanomaterials can be found in paint, prescription drugs, toothpaste, batteries, bandages, sunscreen, and even socks.

Engineered nanoparticles reach the environment at a rate of about 0.3 teragrams per year. A teragram is a measure of weight equal to 1 trillion grams. That’s a tiny fraction compared to natural nanoparticles, such as the dust created by eons of weathered rock. But every year, more nanoparticles are manufactured for more uses.

In medicine, for instance, nanomaterials can shuttle drug molecules into the body with an impressively large surface-to-mass ratio. Their small size enables them to penetrate target cells and organs with precision.

In the summer of 2020, PNNL was named a partner institution in a continuing five-year, $20 million NSF grant for molecular-level research on the transformation, interactions, and impact of various nanomaterials released into the environment. Twelve institutions in nine states are taking part. Among them, PNNL is the only U.S. Department of Energy national laboratory.

This new grant is from the NSF Division of Chemistry, which continues to fund the Center for Sustainable Nanotechnology (CSN), a multi-institutional research center based at the University of Wisconsin-Madison. The CSN was founded in 2012, with PNNL as an inaugural partner.

Researchers at PNNL will use staff expertise and instrumentation at EMSL—the Environmental Molecular Sciences Laboratory, a U.S. Department of Energy user facility located on the PNNL campus. EMSL specializes in biological and biogeochemical investigations at molecular scales.

For about the last 20 years, the modern ubiquity of nanomaterials has made them the subject of intense study regarding potential health effects. One concern is that particles so small can enter the body and slip easily into the bloodstream or lung tissue.

The CSN is focused on the molecular-level transformation and effects of these technologically relevant nanomaterials. Specifically, researchers funded by the renewed grant aim for a predictive understanding of the fate of engineered nanomaterials once they enter the air, water, soil, and the human body.

“Engineered nanomaterials have not been in the environment for a long time,” said University of Wisconsin-Madison professor of chemistry and CSN director, Robert Hamers. “So biological systems have not adapted to challenges they present, leaving the potential for greater environmental impacts.”

Researchers at PNNL and elsewhere ask: What molecular events occur at the interface of nanomaterials and biological systems in the environment? How can negative impacts be mitigated?

At PNNL, the NSF grant’s co-principal investigator is scientist Galya Orr, a molecular biologist active in the CSN research for almost 8 years.

“A molecular level understanding of these processes and interactions will enable the design and synthesis of safer, next-generation nanomaterials,” she said―nanomaterials that maintain “high performance while minimally affecting biological systems.”

One core CSN mission, Orr said, is “to identify critical molecular and biochemical processes that occur at the interface between nanomaterials and biological systems.”

That means using representative cell types and organisms to focus on molecular responses and impacts in the environment. In that sphere, PNNL benefits from using EMSL and its unique staff and instrumentation. Orr pointed to EMSL’s expertise in single molecule-based sub-diffraction fluorescence imaging in living cells. These biophysical microscopy techniques can detect and analyze single fluoresced molecules in a way that barely perturbs biological specimens.

Atomic-force microscopy is used to scan the surface of a cell to study its topography. The technology deploys a sharp-tipped cantilever that scans as it is deflected toward a sample by atomic forces. The resulting image has a resolution measured in fractions of a nanometer. With such technologies at hand, the PNNL-EMSL technology nexus enhances the study of molecular and biochemical processes at the interface of intact cells and nanomaterials.

The promise of nanotechnology

CSN, the Center for Sustainable Nanotechnology research, is one of NSF’s Centers for Chemical Innovation, which are tasked to perform fundamental research on ”grand challenges in the field,” said David Berkowitz, director of the Division of Chemistry, which oversees such centers. He called the CSN’s research “a key element in the industries of the future.” With good reason.

At sizes less than 100 nanometers, and with versatile shapes and material properties, nanoparticles have been incorporated into composite materials, such as the silica nanoparticles used in modern rubber tires. Nanoclays improve the strength of polymers and make a future of non-petroleum polymers possible.

Nanomaterials also hold promise as neutralizers of organochlorine compounds in contaminated aquifers and underlie technologies for quantum imaging dots, molecular magnets, and the nanowires needed for molecular electronics. Moreover, nanomaterials have huge surface areas relative to their sizes, a property desirable in catalytic applications, for instance. A single teaspoon of silica nanospheres, each 10 nanometers in diameter, has more surface area than a dozen tennis courts used to play doubles.

For all their promise, and for their increasing utility in industry and medicine, nanoparticles evoke caution. Not only can they slip easily into lung tissue or the bloodstream, they can interact with living tissue at the level of a single cell.

It is in that realm of nanoparticle interactions with single living cells that Orr and her team excel. In the past, Orr has characterized nanoparticles―with their huge surface-to-mass ratios and reactive natures―as “tiny chameleons” that can change rapidly once they interact with biological systems. That rapid reactivity makes their behavior difficult to predict once they have been inhaled or ingested, as they have the ability to impersonate cellular components or oxygen-delivery systems such as vesicles in the lungs.

Their unpredictability is one of the cruxes of what Berkowitz called “the grand challenge” of understanding the interchange of biological systems with nanoparticles. It turns out that once inside organisms or cells, nanoparticles are chemical pinballs. Will they racket around causing damage―or win the game? Will they be biocompatible or bio-toxic?

For living cells, the answer is: either, or both―a slippery reality because of the ever-changing reactivity and chemical states of nanoparticles. In a blog for CSN, Orr discusses two examples: cerium dioxide nanoparticles, an oxide of the rare-earth metal cerium used as a polishing agent, and zinc oxide nanoparticles used in sunscreen.

The challenge then becomes how to measure the changing chemical states of those nanoparticles within fragile, hydrated, living cells. To this end, Orr and her research team use techniques such as super-resolution fluorescence microscopy to study nanoparticles within an organelle, with nanometer resolution.

For one, the chemical properties of nanomaterials seem to depend on where the particles are within a single cell. These properties also depend on how quickly the nanomaterials degrade. When that happens, Orr’s team has discovered, nanoparticles generally cause the most harm.

Orr and her team also use x-ray microscopy to acquire what is called morphometric data to visualize what happens within and outside living cells. The technique pairs a powerful microscope with synchrotron-generated x-rays at Lawrence Berkeley National Laboratory’s Advanced Light Source.

With another visualization technique, PNNL researchers use a differential interference contrast microscope to capture the movement of nanoparticles as they enter cells. In another CSN blog post, which includes a molecule-scale movie, Orr compares the movement to nanoparticles surfing waves.

In all these ways, PNNL contributes to unlocking the puzzle of nano-bio interactions, a novel dynamic that is both a boon and a worry. In the end, engineered nanoparticles represent a growing issue in need of attention―the kind that the NSF Center, PNNL, Orr, and others can give it.

Institutions and investigators taking part in the grant: