What A Crystal Reveals About Nuclear Materials Processing 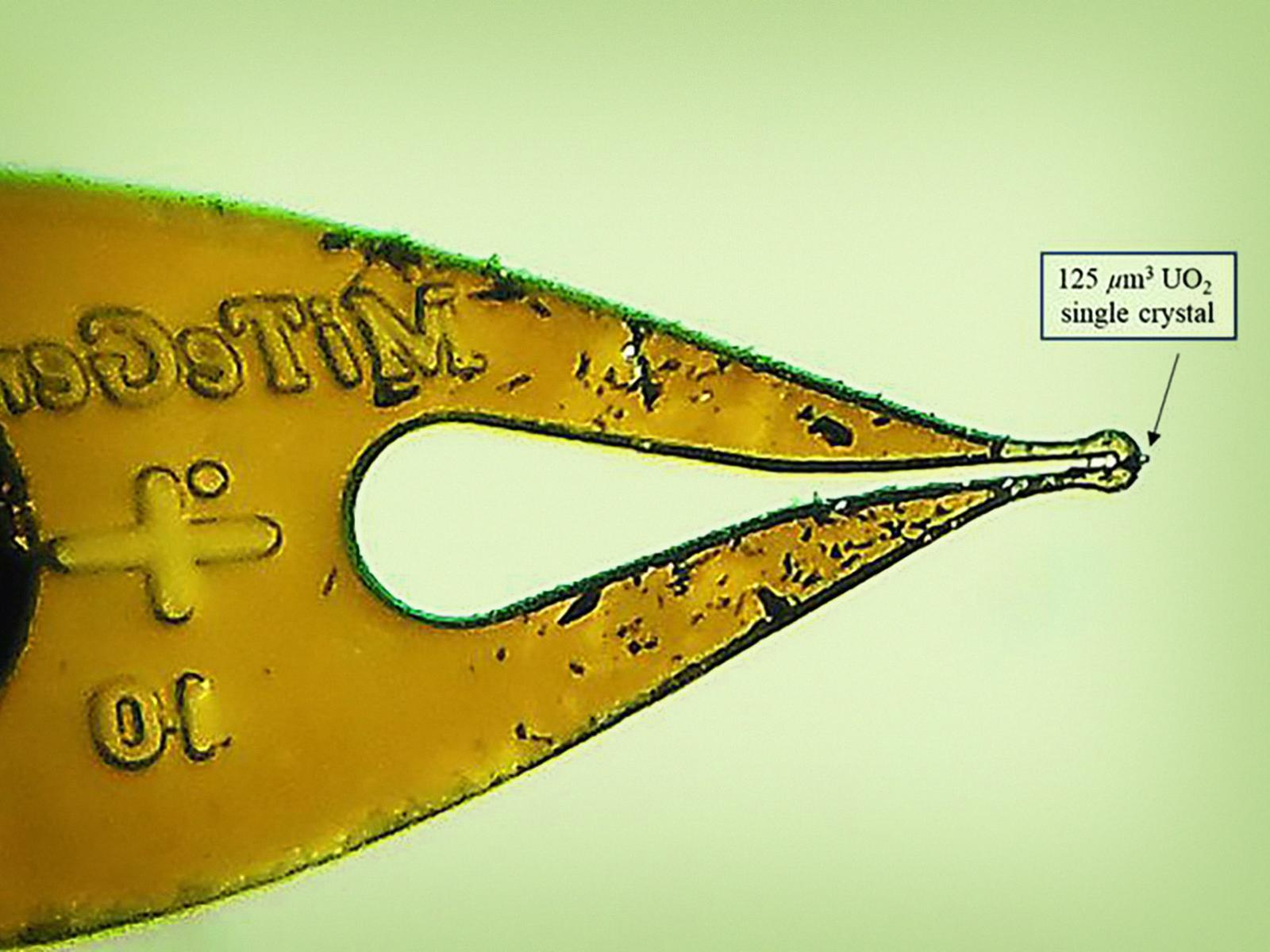 To understand the crystals’ history, the researchers must first understand their chemical structure, also known as speciation. Because plutonium can act very differently depending on how it combines with other elements, knowing the crystals’ speciation is a critical part of safe storage and environmental remediation. These activities are key parts of the U.S. Department of Energy’s cleanup mission at former nuclear material processing sites and facilities. Previous studies showed these particles were primarily plutonium dioxide, but questions remained about whether other species of plutonium were present in the soil.

PNNL researchers created a new method to determine the microcrystals’ speciation, detailed in the Journal of Applied Crystallography. Combining expert techniques with standard laboratory instruments, the method maps the structure of these plutonium microcrystals one atom at a time revealing the structure of some of the smallest plutonium-containing crystals ever analyzed in a laboratory.

Smaller than a sparkle in sand

The tiny plutonium crystals, nearly indistinguishable from the bits of silicon and other minerals around them, were identified in the crib soil samples by PNNL radiochemist Dallas Reilly using a focused ion beam scanning electron microscope. Sometimes cube-shaped, the crystals can be as small as two microns on each side, or facet. A grain of table salt is around one hundred microns per facet. A particle of talcum powder is ten microns.

"I was surprised the particles were crystalline at that size,” said Reilly. “Most of the plutonium I’ve seen from the crib sites at Hanford is from reprocessed Plutonium Finishing Plant waste, either undissolved particles from metal processing or burning, or reprecipitated from the recycle solution as polycrystalline particles. It’s difficult to form crystalline plutonium oxide particles in the laboratory, so seeing single-crystals form as part of that process or some natural process that the environment spurred is really fascinating.”

The unexpected crystals gave researchers an opportunity to answer questions that nuclear materials processing scientists have wondered for decades. Is the speciation more or less complex in an individual particle than in the bulk? Are these crystals associated with elements like phosphorous that may have been present during processing? And, if plutonium metal particles are exposed to oxygen at high temperature, does the outer layer of plutonium oxidize while the inner metal remains intact, much like rust forms on steel?

Researchers lack a complete answer to these questions in large part because common nuclear material analysis tools at this scale rely on dissolved samples. These tools focus on ratios of isotopes and are unable to provide structural data, such as the relative positions of atoms and how they are bonded together.

PNNL inorganic chemist Jordan Corbey is an expert in single-crystal X-ray diffraction (SCXRD), one of the only non-destructive techniques that can determine a crystal’s chemical structure. Crystals are made of regularly spaced atoms, so as X-ray beams pass through the crystal, light scatters in regular patterns.

Corbey analyzes these patterns to measure the distance between atoms, creating a 3D map of the repeating units in the crystal lattice. The map is detailed enough that it can distinguish between different chemical species that make up the extended solid.

Plucking a plutonium particle out of a soil sample is a difficult task, considering not only how radioactive these crystals are but also how small. To further complicate the matter, the researchers were specifically searching for pure, independent crystals in the mixture of many other compounds present in the crib soil.

“Analyzing more than one crystal at a time convolutes the data,” said Corbey. “With a good, single-crystal, I can tell you the number of oxygen atoms bound to each plutonium atom and how they share electrons.”

But analyzing the plutonium crystals wasn’t straightforward. SCXRD typically requires crystals much larger than the specks of plutonium from the Hanford site. The team was initially unsure if the technique would be useful for these small environmental samples.

A uranium proof of concept

Before attempting to analyze the plutonium particles using SCXRD, the team started with uranium-238 oxide crystals that they milled into a series of smaller cubes via a focused ion beam scanning electron microscope. Uranium-238 is much less radioactive than plutonium and has fewer possible structural arrangements.

The team systematically probed each uranium crystal’s structure to prove they could accurately map the atoms in progressively smaller crystals. Beginning with a bulk uranium crystal with facets the size of a fingernail, they proceeded down to a speck of uranium oxide no bigger than the average red blood cell.

With successful proof of concept from their uranium tests, the team used SCXRD to definitively identify the crystals in their crib soil sample as plutonium dioxide. This confirmation could help remediation experts at Hanford in their efforts to safely contain legacy plutonium wastes, including the crystals.

“This type of work is all about establishing a timeline,” said Reilly. “With nuclear materials such as these particles, we ask ‘how did it get here?’ to understand the processing history for national security implications, as well as ‘where is it going?’ to understand environmental implications. Finding out the chemical speciation and structure can help answer both questions.”

Universities and other research facilities with lower radiological limits than PNNL’s facilities could use the team’s method to study a host of radioactive materials, including heavier elements like americium, which can only be handled in prohibitively small quantities.

Since the crystals studied by Corbey and Reilly constitute only a small portion of the crib soil analyzed, there is still more work to be done. As Corbey put it, “We want to determine how representative one speck is of other particles in the sample.”

Different crystal structures are associated with different nuclear materials processing activities. The shape of a crystal could reveal something about the container it formed in, how it was mixed, or what else was present when it was created. Every new crystal mapped is another step forward in the quest to better understand both nuclear materials processing and improve environmental remediation.

The samples are from the 216-Z-9 waste crib at the Hanford Site and were collected during excavation and mining activities in the mid-1970s. This crib received waste from the Plutonium Finishing Plant, also known as Z-Plant and Building 234-5. More details are available in the Experimental section of the paper.