A Watershed Study for Wetland Restoration 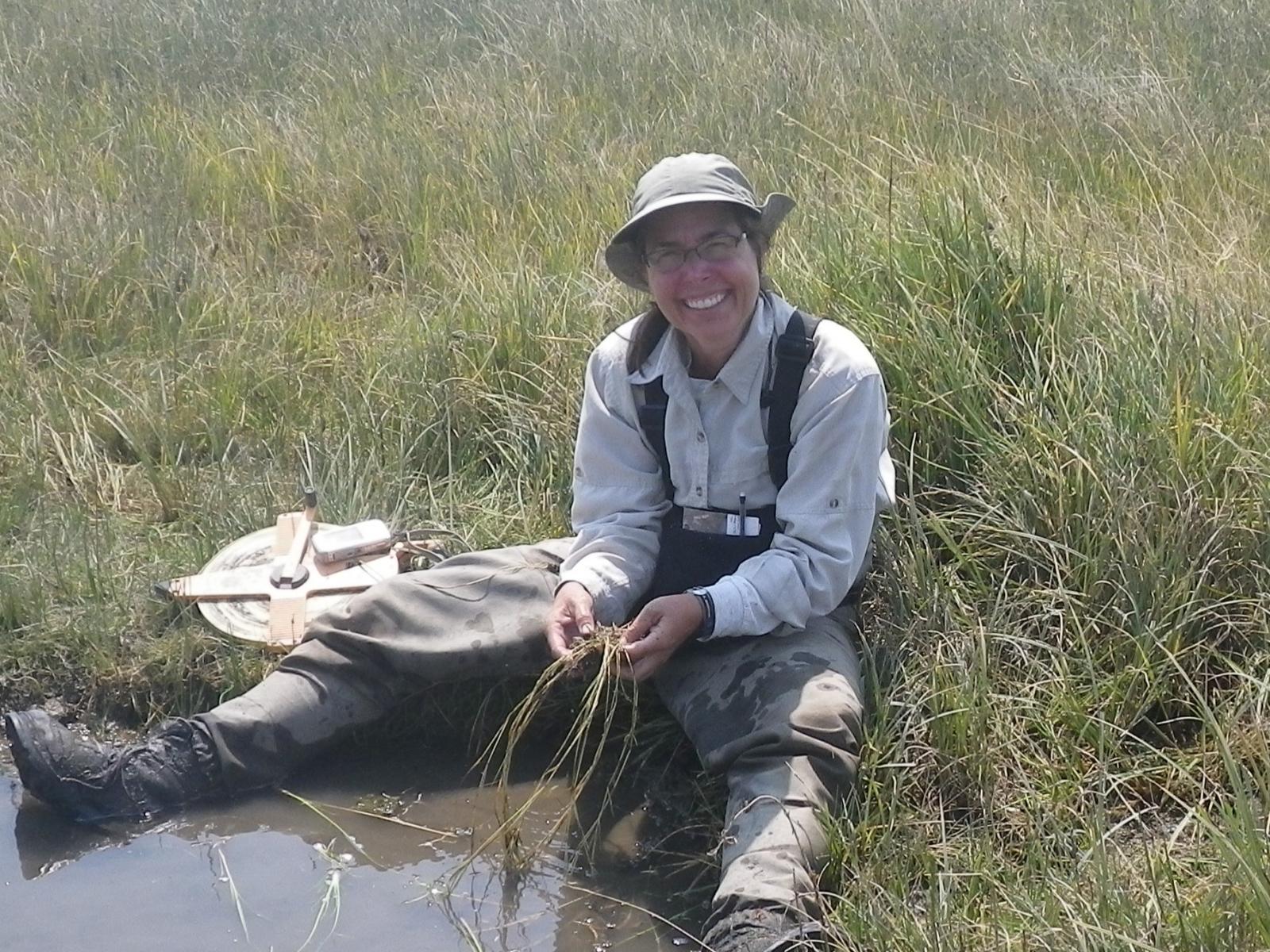 Amy Borde, an Earth scientist at PNNL’s Marine and Coastal Research Laboratory, identifies grass species at the edge of a brackish marsh near the mouth of the Columbia River.

Where rivers meet oceans, each cycle of the tide moves water in and out of estuaries. The mixing and mingling of fresh and briny water, combined with seasonal weather, creates a unique environment for ecosystems in coastal estuaries and upstream tidal rivers.

But what does climate change mean for these wetland communities? And how might activities such as dam operations and land development affect them?

To help answer those questions, researchers at the Pacific Northwest National Laboratory's Marine and Coastal Research Laboratory developed a predictive framework of ecological indicators and analyses for estuarine–tidal river research and management. A decade in the making, the innovative framework provides a means for understanding how both natural and human forces govern hydrology and plant communities in these complex wetland ecosystems, now and into the future.

The framework is described in “Ecohydrology of wetland plant communities along an estuarine to tidal river gradient,” which appeared September 18 in the Ecological Society of America’s open-access journal Ecosphere. The research is the latest in a series of regional-scale studies supported by the Bonneville Power Administration and U.S. Army Corps of Engineers, Portland District, which are implementing a program to reconnect and restore wetlands on the Columbia River floodplain.

A first for ecohydrology

From 2005 to 2016, the study team recorded land elevation, water elevation, and plant types from 50 marshes along the lower Columbia River floodplain. This floodplain extends 145 miles from the mouth of the Columbia River to Bonneville Dam, 40 miles east of Portland, Oregon.

Amy Borde, a PNNL Earth scientist and the study’s lead author, combined the survey data with an algorithm to measure inundation—how much water persisted for how long at a certain site. Borde said that the resulting cumulative value allowed the researchers to merge the different types of hydrologic information into a single number.

“We could then compare across elevations at a single site, or between sites along the river’s gradient,” said Borde. “It was a valuable tool to analyze the hydrology.”

Heida Diefenderfer, a fellow Earth scientist at PNNL and co-author of the study, said that the new framework could provide a basis for modeling and predicting future change in similar tidal ecosystems around the world.

“Amy’s work made it possible to compare wetlands throughout this type of gradient, from the coastline to a river-dominated system, which had never been done before,” said Diefenderfer.

Like giant sponges, wetlands serve key environmental functions, such as controlling flooding, storing carbon, and filtering pollution. Wetland habitats also provide protection and food for birds, fish, and mammals. For example, tiny salmon nibble along the shores of the Columbia River, growing and gaining strength on their downriver journey to the Pacific Ocean.

But Diefenderfer said that these important coastal ecosystems often go unnoticed or are viewed as wastelands.

“They tend to get filled in and built over or farmed,” said Diefenderfer, “so understanding the hydrological thresholds and competition between species is important both to inform ecosystem restoration and to improve understanding of how wetlands relate to global change.”

Bonneville Dam represented a natural boundary for the study. Of numerous dams on the Columbia River—which originates in Canada and flows through several U.S. states before heading west out to the Pacific Ocean—Bonneville is the farthest downriver. During late summer and fall, when river flows are lowest, the tides can travel all the way upriver to the dam, or the “head of tide.”

The long-term research effort, a focus of PNNL’s Coastal Ecosystems Research team, allowed scientists to record plant responses in low-, medium-, and high-flow years. Results showed that plant species varied across elevations within wetlands and along the river. The variations depended on the distance from salt and tides at the coast, and the volume of river flow below the head of tide.

Based on the framework, the team identified five distinct vegetation zones associated with indicator species and unique patterns of salinity and inundation. Two plant species—Lyngbye’s sedge (native) and reed canarygrass (non-native)—stood out for their coverage and competitive effects on other plants. The dominant role of these two species traded off between ocean- and river-influenced zones, respectively.

The team’s ecohydrological framework can be used for landscape-scale approaches to ecological research and management in tidal river transition zones around the world. The study also relates to PNNL’s global Earth system modeling efforts for the U.S. Department of Energy through its research to better understand and model the terrestrial-aquatic interface—where ecosystems transition between land and water.