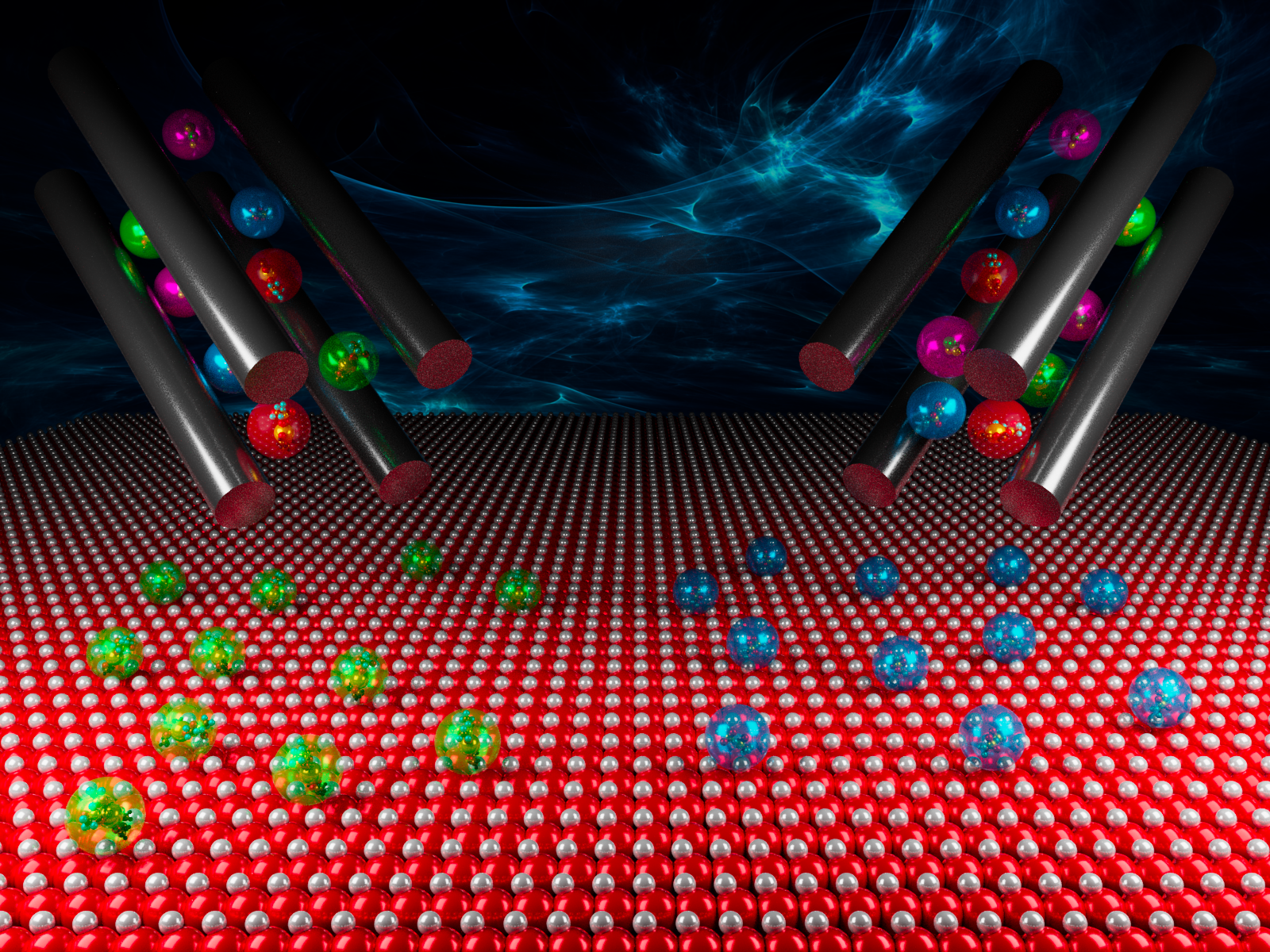 Ion soft landing allows researchers to select which ions land on a surface by charge and size.

Every technology that runs our world requires energy on demand. Energy must be stored and be accessible to power electronic devices and light buildings. The wide range of devices that require energy on demand has led to the development of numerous strategies for storing energy.

Many energy storage devices combine chemical and electrical processes to convert energy from one form to another. This process results in an interface—the place of action where two different materials meet and transform. To make more efficient, longer lasting energy storage devices, scientists need to control what happens at and near these interfaces. But that’s not easy.

“Most research makes a complicated interface and then uses advanced characterization techniques to try to understand it,” said Grant Johnson, a chemist at Pacific Northwest National Laboratory (PNNL) who leads the Separation Science program. “In comparison, we don’t make the whole interface. We prepare each piece separately, which allows us to study the individual components and how they form.”

Their approach is called ion soft landing. The technique allows scientists to see how individual charged molecules, or ions, that exist at real energy storage interfaces interact with an electrode surface and an electric potential. It simplifies the messy interfaces that exist in real energy storage systems into separate systems with just one type of ion and the surface. The researchers can then investigate the role each molecule plays in creating the interface.

Ion soft landing enables researchers to select a single, specific type of ion by charge and size. The chosen ions then land gently on a conductive surface. This process prepares a precisely defined interface characteristic of the reactions of the selected molecules and surface material.

Once the interface is prepared, researchers may use other instruments to examine how the surface and the molecule interact. This characterization reveals information about the nature of the chemical bonds broken and formed at the interface.

Lithium-ion systems, which power many of our electronics, may be the most familiar energy storage devices. The PNNL research team, however, is exploring even more efficient and potentially transformative energy storage systems. These include lithium-sulfur ions, lithium-based solids, and moving beyond lithium chemistry. For this research, the team starts with an electrolyte solution of molecules and soft lands selected ions, like various lithium sulfides, on lithium metal with an oxygen-rich surface.

They recently discovered one way the negatively charged lithium-sulfur ions play a key role in the operation of these new energy storage devices at interfaces. They found that the ions undergo multiple reactions centered on the reduction and oxidation chemistry of sulfur, rather than lithium.

The findings explain the nature of the sulfur-oxygen bonds and related reacted molecules observed in energy storage devices. The ion soft landing work provides a molecular-level explanation for why oxidized forms of sulfur exist at lithium-sulfur interfaces. Understanding exactly how these important ions turn into solid materials at a model interface helps researchers break down the complicated interfaces in real devices.

“Each time we explore how an individual type of molecule reacts, we learn something new that builds collective knowledge about interface formation,” said Johnson.

Originally, PNNL researchers developed their ion soft landing capabilities with support from the Department of Energy (DOE) Basic Energy Sciences Separation Science program. Through that program, chemical engineer Venky Prabhakaran used ion soft landing to study electrochemically active interfaces for separations. However, he wanted to see what the technique could do beyond separation systems. A meeting with physicist Vijay Murugesan a few years ago brought about ion soft landing’s entrance to the world of energy storage. Murugesan leads a focus area for the Joint Center for Energy Storage Research (JCESR), a DOE Innovation Hub.

“One day, I had a meeting with Vijay about something else and we started talking about our research,” said Prabhakaran. “We quickly realized that ion soft landing might be an important tool to help answer key questions in the JCESR focus area Vijay leads.”

The team’s upcoming move to the Energy Sciences Center will streamline their work and bring them closer together for efficient collaboration and experimental studies.

“Currently, we have to go down several corridors to get from the ion soft landing lab to key characterization instruments,” said Murugesan. While that might not seem far, that short walk causes problems for their highly sensitive and reactive samples. The researchers have to use a special “vacuum suitcase” to transport the samples, even down the hall.

“In the Energy Sciences Center, our labs will be right next to each other,” said Prabhakaran. “We will have a connecting door!” The significantly shorter walk from instrument to instrument means less time for possible sample degradation or contamination.

A recent innovation that has the team excited involves simultaneously selecting and depositing two kinds of ions, one positive and one negative. This approach creates a more realistic model of energy storage devices. The different ions interact with each other and the surface, enabling the team to capture the action at the interface.

Some of the work mentioned in this article was supported as part of JCESR, an Energy Innovation Hub funded by DOE’s, Office of Science, Basic Energy Sciences program. It was done in collaboration with Texas A&M University. In addition to Johnson, Murugesan, and Prabhakaran, other PNNL authors are Kie Hankins, Sungun Wi, Vaithiyalingam Shutthanandan, Swadipta Roy, Hui Wang, Yuyan Shao, Suntharampillai Thevuthasan, and Karl Mueller. Part of the work was performed at EMSL, the Environmental Molecular Sciences Laboratory, a DOE Office of Science user facility at PNNL. Future work will continue at the Energy Sciences Center.