Tracking Toxics in the Salish Sea 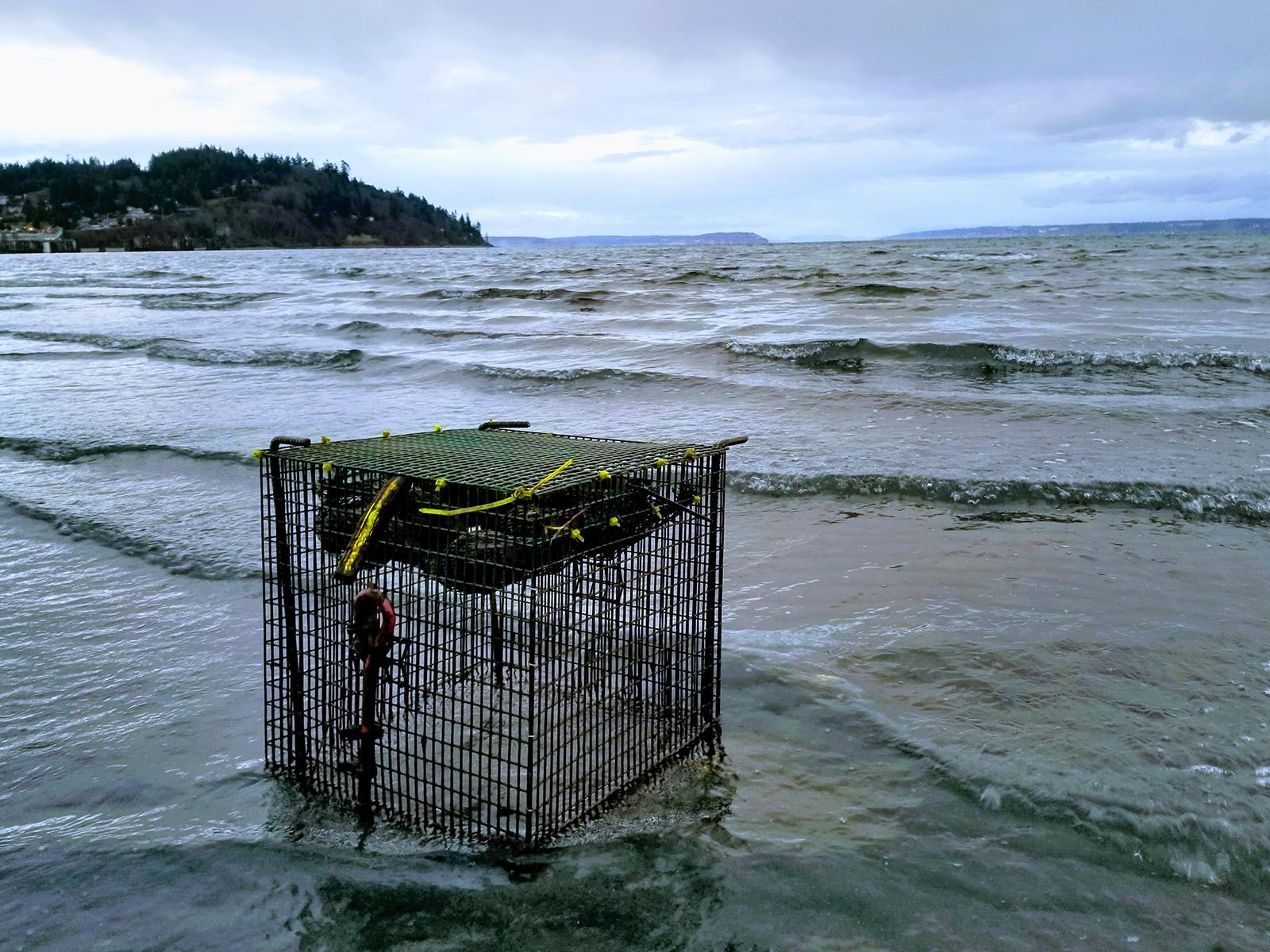 Mussels were transplanted via cages in 18 locations around Puget Sound, including this one at Appletree Cove. They were then collected and tissues were sampled for 200 contaminants.

Photo by David Toth, volunteer for the Washington Department of Fish and Wildlife

With the help of a diagnostic tool called the Salish Sea Model, researchers found that toxic contaminant hotspots in the Puget Sound are tied to localized lack of water circulation and cumulative effects from multiple sources.

Pharmaceuticals such as opioids and the chemotherapy drug melphalan—along with a suite of 62 other contaminants—were detected by a team of researchers from the University of Washington (UW), Washington State Department of Fish and Wildlife (WDFW), and PNNL.

Environmental contaminants are a global problem. Some toxic chemicals are unregulated, and their environmental effects are not well understood. But pharmaceuticals, flame retardants, detergents, some industrial chemicals, and even fragrances from soap or lotion are what researchers call ”contaminants of emerging concern.”

The 99 wastewater outfalls that discharge into the Puget Sound are regularly tested and treated to protect human health and marine life. Despite this process, the research team found concentrations in mussels that were potentially concerning in some localized areas.

“There is a regulatory system in place already to manage pollutants from outfalls. But these data show there is still a suite of chemicals that are entering our surface waters that could bioaccumulate if they are not flushed away efficiently,” said PNNL scientist Tarang Khangaonkar, who is supporting UW and WDFW efforts with the Salish Sea Model.

Contaminants follow a pattern similar to leaves caught in a river eddy—they are transported to wherever water takes them and accumulate in regions with poor circulation. Runoff from parking lots and wastewater pipes all funnel contaminants into the Puget Sound. From there, toxics ride the current and are mixed, churned, and diluted by the pulsing tides. Manmade structures, such as ship canals, can restrict tidal pulses and cause water to stagnate. Contaminants settle out, accumulate, and can show up in marine animals that live there.

Mussels are a canary in the coal mine—an indicator species—that help scientists better understand environmental issues. As filter feeders, mussels consume food from the surrounding water and can accumulate contaminants in their tissue. This accumulation helps researchers understand what contaminants are in the water. This makes mussels a great study subject in the search for toxic contaminants.

The UW and WDFW research team examined mussels from 18 rural and urban sites around the Puget Sound—spanning from Port Townsend, inland to Everett, south to Olympia—to evaluate whether urban mussels had more contaminants than rural mussels. If contaminants were present, the researchers wanted to determine the source of the toxics. In other words, were contaminants coming from wastewater outfalls or from urban runoff?

Although this study was limited in scope, they found that mussels near urban areas did not necessarily contain more contaminants in their tissues. Toxic buildup had more to do with how much tidal flushing occurred in different bays, inlets, and waterways. Enclosed waterbodies that undergo poor flushing tend to have more stagnant water, resulting in contaminant buildup over time. Urban runoff from concrete, asphalt, parking lots, and roads likely plays a role in toxics getting into the Salish Sea in the first place. Plus, the combined effects of multiple outfalls likely play a major role in contaminant accumulation in certain areas.

PNNL’s Salish Sea Model is a powerful computational tool that has been used to show water circulation patterns throughout the greater Puget Sound region and along the Pacific Ocean’s continental shelf, stretching from British Columbia’s Vancouver Island south to Oregon’s Yaquina Bay. Since 2018, the model has been used to predict the effects of climate change, to evaluate the duration of hypoxia events, to simulate the effects of nutrient pollution, and now to help interpret observed data on accumulation of toxics in mussel tissues.

In these studies led by UW and WDFW, the Salish Sea Model was used in a supporting role to compute a Salish Sea-wide map of effluent concentration from 99 wastewater outfalls over a one-year period. It was used by the researchers to examine exposures from the combination of all 99 wastewater outfalls, Khangaonkar explained. Water movement patterns are at the core of understanding the biogeochemical cycles and toxics fate and transport in the Puget Sound.

“It’s difficult to see overall trends without taking into account circulation patterns,” Khangaonkar said. “The Salish Sea Model is now being used by various research groups who recognize the importance of tidal circulation but lack the in-house modeling expertise. This support to the Puget Sound research community was one of the original motivations for developing the Salish Sea Model.”

The Salish Sea Model was used in two recently published studies led by UW and WDFW researchers with support from Khangaonkar. One study examined what contaminants accumulate in mussels, and the other study looked at the chemistry of water samples.

WDFW has been tracking toxics in mussels for eight years but wanted to collaborate with an oceanographer to better understand toxic transport patterns, WDFW research scientist Jim West said.

“We’ve long had the desire to connect with a modeler to help us understand how toxics move through the water,” West said. “Tarang came to us and said, ‘We’re thinking about adding a toxics component to Salish Sea Model—are you interested?’ We said heck yeah!”

“Tarang came to us and said, ‘We’re thinking about adding a toxics component to Salish Sea Model—are you interested?’ We said heck yeah!” - Jim West, research scientist, Washington Department of Fish and Wildlife

The study’s lead author, C. Andrew James with UW’s Center for Urban Waters, seconded the importance of the collaboration with PNNL.

“The Salish Sea Model is a really valuable contribution,” James said. “There are 99 wastewater treatment plants whose discharges flow into the area and the currents go a lot of different ways. It’s hard to predict where things end up. We wanted to know if we can evaluate currents and tides to figure out where contaminants go.”

For the first time, researchers predicted the combined concentration from all wastewater outfalls simultaneously using the Salish Sea Model. They were able to anticipate the highest contaminant accumulation areas based on currents, likelihood of dilution, and the distance from wastewater outfalls. Researchers concluded that toxics get caught up in some areas and are not flushed out. These areas have a higher level of contaminant buildup, making them more prone to biological impacts.

Marine life in the Salish Sea region is regularly exposed to a variety of contaminants from multiple sources. More information is needed to better understand these pathways, interactions, and chemical changes.

“We want to get better at incorporating the transport chemicals via the Salish Sea Model,” James said. “For example, when toxics enter the Puget Sound, some will degrade or transform.”

Sharing the Salish Sea Model with the Community

The methods, models, and procedures used in projections for the Salish Sea region could be applied for similar analysis in other regions. The Salish Sea Model application results and solution files are routinely made available to collaborators upon request.

The Salish Sea Model was developed by PNNL in collaboration with the Washington State Department of Ecology and through U.S. Environmental Protection Agency grant support.