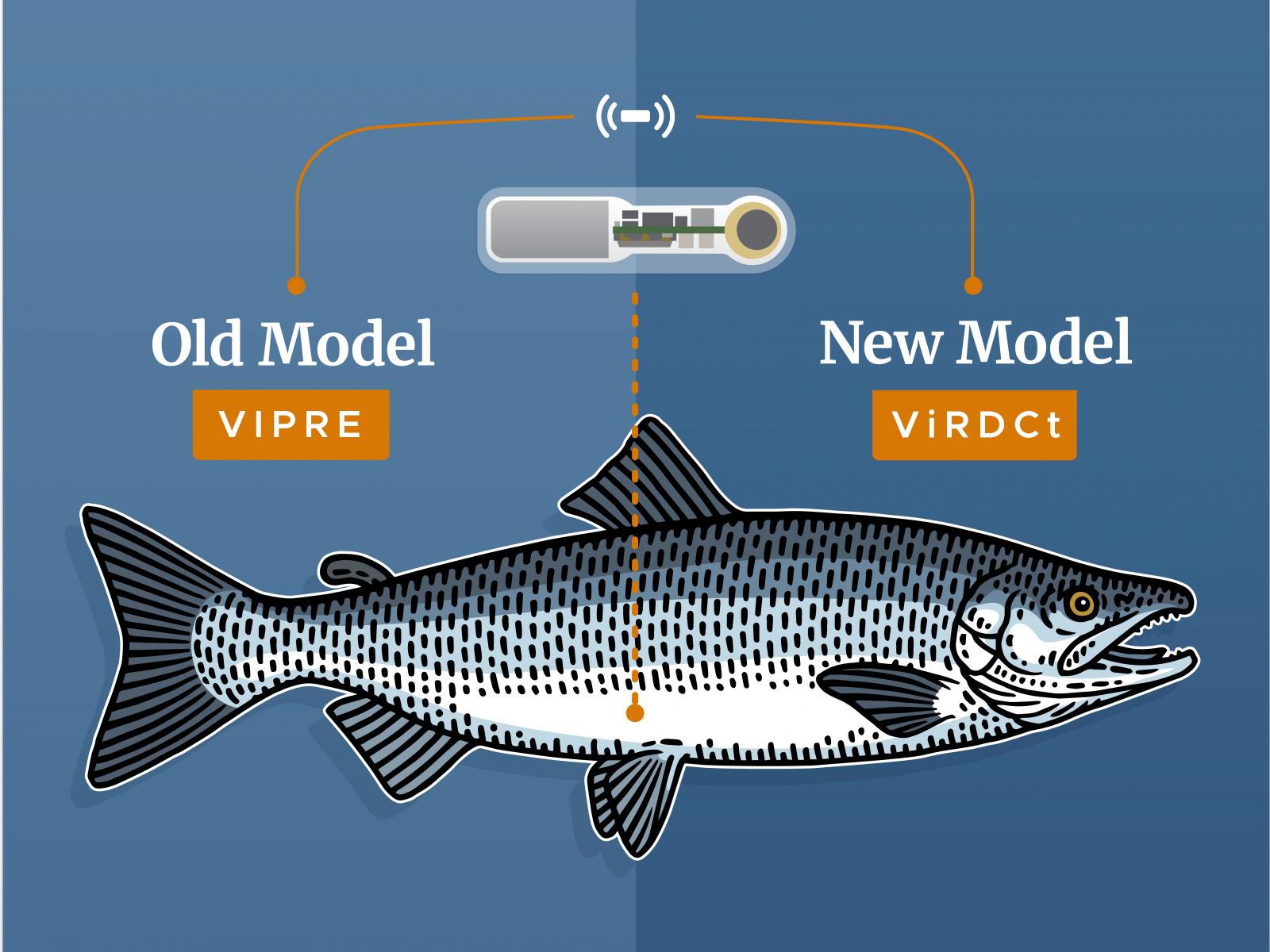 PNNL biologists have developed a more efficient way to estimate salmon survival through dams that uses solid science and saves over 42 percent of the cost—over $500,000 in a recent study.

Federal agencies required a minimum criteria of 96 percent of spring-migrating and 93 percent of summer-migrating juvenile salmon had to survive passage over Lower Granite Dam, located in southeastern Washington. Because it’s impossible to count each fish, scientists rely on mathematical models. These models rely on tracking a sub-sample of salmon that is designed to represent the larger population. However, traditional models have been expensive and time consuming.

Ryan Harnish, a PNNL biologist, and his team developed a new model that is a cheaper, yet accurate way to estimate salmon survival. This new model is more efficient—cutting costs nearly in half and research time by nearly a quarter—compared to the previous model. With increased efficiency and lower costs, this new model could be applied to other dams, and used by entities such as Columbia River utility companies that are required to monitor survival when conducting similar projects.

What do salmon need to survive?

Salmon have a rare ability to go from freshwater to saltwater and back again—a trait referred to as anadromy. Most fish live in either freshwater or saltwater. Few live in both. Adult salmon spawn in rivers and once juveniles hatch, the young fish head downstream to the ocean. On their journey, young salmon encounter many obstacles—dams, predators, and variable river conditions, to name a few.

PNNL researchers have studied ways to make the dam passage safer, including special water slides called weirs, and dam operations, including how much water is spilled and when. Behind the scenes of research lies a lot of math. Mathematical models help answer the question: how many salmon actually survive?

“Although nearly every adult salmon can be counted passing the dams, there is no way to count the millions of smolts. Instead, we estimate survival for a subsample of fish implanted with acoustic tags” said Harnish.

Salmon survival through dams is tied to several factors including: the amount of water in the river, the amount of water spilled, water temperature, fish size, and the route the fish takes through the dam. At most dams of the lower Snake and Columbia Rivers, there are four ways salmon pass: the spillway, a surface weir, the turbines, and the juvenile bypass system. Each route has a different rate of survival, making the math more complex.

Tiny acoustic tags, developed by PNNL, are implanted in the juvenile salmon. Each tag sends data to receivers. The researchers place receivers wherever they want to know more about fish behavior and survival, such as on the dam itself to know how many fish pass, and in the tailrace, directly downstream of the dam, to know how many survive. While receiver data provides the majority of fish survival information, fish that die during passage can also be detected in the tailrace.

For example, if a tagged salmon dies during dam passage and drifts downstream, passing by the receiver, the salmon gets counted as alive. That’s called mathematical bias. Harnish and his group worked to correct that bias with the improved model.

“The new model, known as the ViRDCt model, corrects for potential bias by including a release of deceased tagged fish at the dam to estimate the probability of detecting fish that die during dam passage” said Harnish. Essentially, if you know how many of the dead tagged fish make it to the receivers in the tailrace below it, you can use that information to correct the survival estimate.

Aiming at the bullseye

Estimating salmon survival is a tangled web of mathematical probabilities, and federal law has required this math to have a certain level of confidence associated with it. It is loosely analogous to playing darts. Sometimes the estimates are clustered tightly together, which is known as precision. Yet, they might be far away from the actual bullseye, making them inaccurate. Other times the results are centered around the bullseye and are technically more accurate yet spread out, and not very precise. Other times it takes a lot of darts to hit the center.

Prior to PNNL’s new model, the darts were more spread out and it took a lot of darts to hit the bullseye. This is expensive. With the new model, fewer darts are needed to be both accurate and precise. This is a more economically efficient way to better understand fish survival through dams and to determine if the survival rate meets the federal threshold.

In addition, the new model uses less staff time, is a simpler study design, and requires less research gear, such as tags and receivers. “Ultimately, we now have greater confidence in the estimates, while also saving money in the process,” said Harnish. The new model is also saving the resource by requiring less fish to be collected, handled and tagged to meet levels of accuracy and precision.

Research team: PNNL’s Ryan Harnish and Kenneth Ham, along with the University of Washington’s John Skalski and Rich Townsend

Funding: This research was supported by the U.S. Army Corps of Engineers and the Bonneville Power Administration.