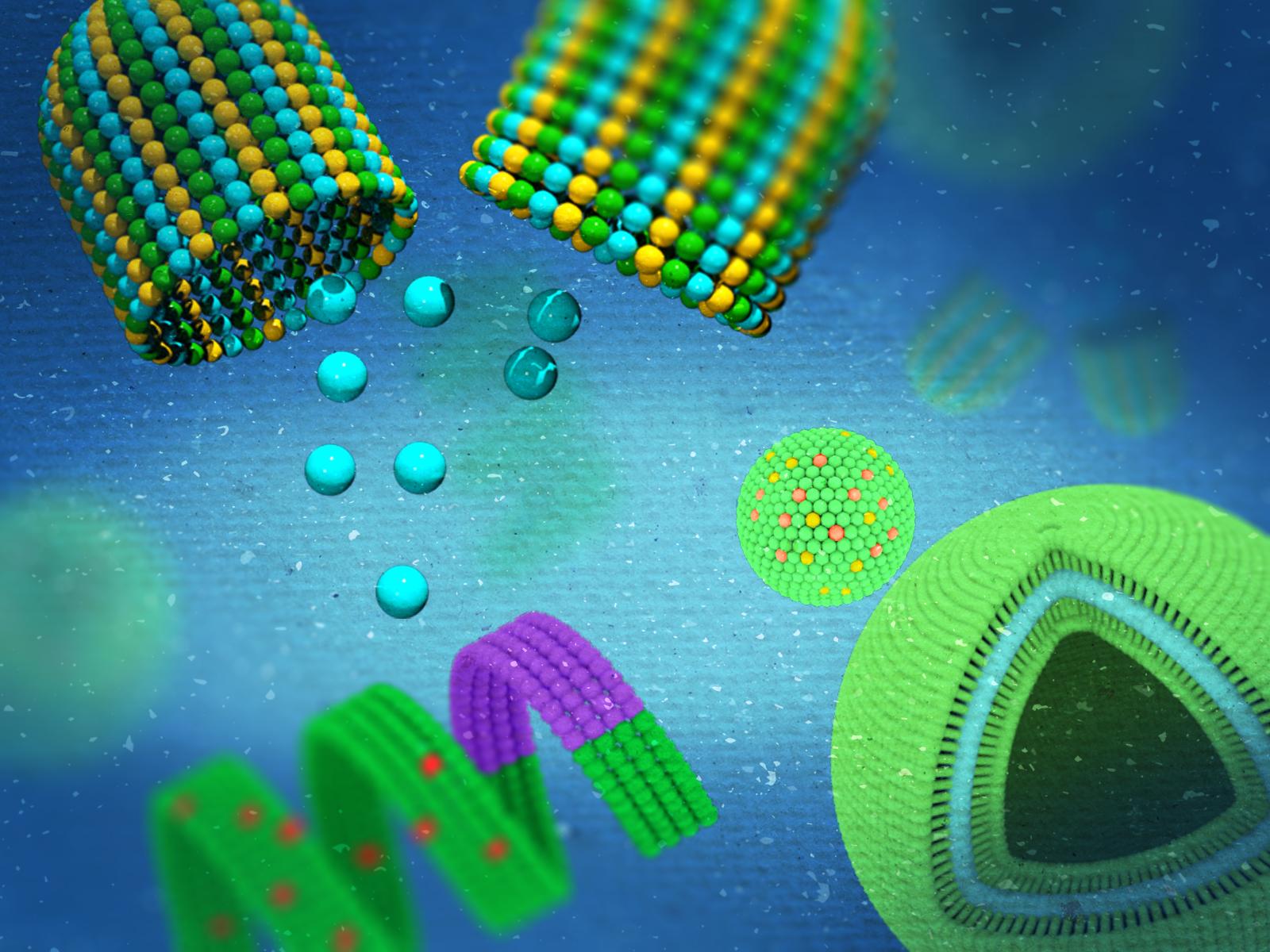 Velcro. Airplanes. Sonar. What do these have in common? The invention of each was inspired by nature. Velcro mimics burdock burr’s ability to attach to clothing. Birds in flight motivated the eventual development of airplanes. Bats use echolocation to navigate, providing the inspiration for sonar.

At Pacific Northwest National Laboratory (PNNL) materials scientist Chun-Long Chen is also interested in the models found in nature, but on a much smaller scale. Chen takes his inspiration from molecular structures found in nature; primarily from the building blocks of proteins, called peptides. He creates sequence defined peptoids—synthetic protein-like molecules that are more robust than natural building blocks—to develop biomimetic nanomaterials with unique functions.

These bio-inspired nanomaterials show promise in a wide variety of applications, from drug delivery to photovoltaics. As an emerging leader in molecular self-assembly, Chen, along with several of his former trainees, recently wrote a review article for an upcoming special issue of Chemical Reviews. This article covers the state of the art in hierarchical nanomaterials assembled from sequence-defined synthetic polymers. Through this review, the authors hope to encourage others in related fields to explore the design of biomimetic nanomaterials for advanced energy, biomedical, and environmental applications.

“I am very inspired by Chun-Long's achievements in this field, and I truly believe he is just at the beginning of discovering all kinds of new applications for biomimetic peptoid nanostructures,” said Chen’s former mentor and peptoid inventor Ronald Zuckermann, of Lawrence Berkeley National Laboratory (LBNL). “His research is opening up a whole new era of biomimetic nanoscience, where we can manipulate synthetic nanomaterials with atomic precision to solve problems in molecular recognition, catalysis and therapeutics.”

Chen’s own research focuses on developing sequence-defined peptoids to mimic natural proteins for both biomimetic crystallization and assembling of biomimetic materials. The structures formed by these self-assembling molecules exhibit properties that are greater than those of the individual molecules. Proteins, for example, contain several layers of structures. Amino acids are joined together to form peptide molecules which make up the protein. Peptides fold to form the 3-D structure that gives the protein its function. And at the next level, multiple proteins can come together to form complexes for unique functions beyond the capabilities of the individual proteins.

“Creating synthetic polymers that self-assemble into hierarchical nanomaterials like natural macromolecules is very exciting, but the field is still relatively new,” said Chen. “Through this review, we wanted to highlight some of the advances made towards the molecular self-assembly of these sequence-defined synthetic polymers. We also wanted to discuss the potential applications of their self-assembled hierarchical materials in biomedical sciences and renewable energy.”

“Proteins contain a lot of information. Their amino acid sequences dictate their structure and function in our bodies. The peptoids we synthesize take this idea of using sequences to program these molecules for different functions,” said Chen.

“In principle, we can use peptoids as a platform of programmable building blocks and assemble them like LEGOs® to build high-information-content hierarchical materials with high programmability and predictability to meet our needs. The challenge is gaining the insight for these predictions through careful study of our successes and failures,” said Chen.

The nanomaterials Chen creates are notoriously unpredictable. It is difficult to synthesize materials that can perform specified functions. Chen, however, is no stranger to overcoming such challenges. As a graduate student at Sun Yat-Sen University in China, Chen began investigating the design and assembly of molecules into supramolecular structures. This paved the way for his work as a postdoctoral research associate at Mississippi State University, the University of Pittsburgh, and LBNL, where he worked with Zuckermann.

Chen was eventually recruited to PNNL, where he spearheads the design of sequence-defined peptoids capable of self-assembly.

“There was a lot of trial-and-error involved in not only creating the molecules themselves but making sure they could form the larger structures we wanted them to,” said Chen.

He and his team initially set out to create molecules for biomedical applications like drug delivery and biological imaging. Soon, they expanded their research into a wide range of applications, including water decontamination, and battery research.

“It is a great honor for our group to be part of this ‘Molecular Self-Assembly’ special issue in Chemical Reviews and for me to be invited to write an extensive review in the area of molecular self-assembly of sequence-defined synthetic polymers,” said Chen. “This is a great recognition of many years’ of hard work in this field, including our contributions from PNNL.”

After receiving this invitation, Chen immediately assembled a team consisting of two of his former postdocs, Zhiliang Li and Bin Cai, both of whom are now professors at Shandong University, and a visiting graduate student: Wenchao Yang, a graduate student from Tianjin University. The three worked with Chen as co-authors to outline the current state of the art in the molecular self-assembly of peptoids and other sequence-defined polymers into hierarchical nanomaterials and their potential applications in energy and biomedicine.

“While working with Chun-Long, I gained valuable knowledge in the field of biochemistry, such as design and synthesis of biomolecules, organic synthesis, and molecular self-assembly,” said Bin Cai, a former postdoctoral researcher in Chen’s group at PNNL. “In addition, his scientific insight and optimistic attitude greatly impacted and shaped my career direction. Specifically, what I learned from him is how to concentrate: how to focus on one important scientific issue and make several plans towards achieving it.”

This work was supported by the Department of Energy’s Office of Science through its Basic Energy Sciences Biomolecular Materials Program and Center for the Science of Synthesis Across Scales, an Energy Frontier Research Center led by the University of Washington. Chen also holds a dual appointment in the University of Washington’s Department of Chemical Engineering, where he runs a research laboratory and mentors several students and other researchers.