Non-toxic chemical reaction is anticipated to save water, money, and time for geothermal and oil and gas applications 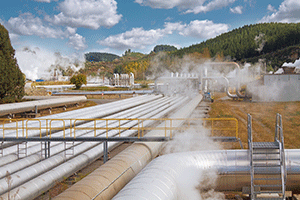 You probably learned in grade school that the earth’s core is incredibly hot. What if there was a way to capture that heat and turn it into electricity? Well there is, but it’s not easy. Enhanced geothermal systems (EGS) work by flowing fluid through hot rock below the earth’s surface and pumping it above ground to generate electricity. However, before fluid can be heated by the earth’s core, a fracture network below the surface must be created. This is done by hydraulic fracturing: a mechanical process that forces fluid underground at high pressures to create tiny fractures in underground rock.

. Rather than using large volumes of water and an immense amount of pressure to create fractures underground, this green fracking fluid relies on a safe chemical process to do the hard work.

What’s in the secret sauce? A chemical reaction that occurs when poly(allylamine) and carbon dioxide (CO2) are combined.

Think of the popping candy Pop Rocks© that “pop” when the ingredient CO2 comes into contact with your mouth. In a similar fashion, CO2 is added to the green fracking fluid and then reacts with the poly(allylamine) expanding in volume and creating pressure in addition to what already occurs during conventional hydraulic fracturing.

Not only could PNNL’s StimuFrac™ use significantly less water compared to conventional hydraulic fracturing methods—making it more environmentally friendly—it is expected to also significantly reduce costs. The additional pressure created when using PNNL’s fluid means less mechanical pressure is required, potentially less water is used, and fracturing can be done more quickly. All of these factors combined could reduce operating costs by 60 percent while increasing permeability up to 10,000 times compared to conventional fracturing methods. 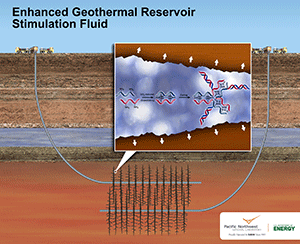 Putting StimuFrac™ to the Test

StimuFrac™ was proven in the laboratory, but PNNL scientists wanted to see their technology in action. More specifically, they wanted to know if this technology would work anywhere, not just in the controlled spaces of their laboratory. They tested the fluid under many different chemical and geomechanical conditions with different pressures, temperatures, and pH environments. StimuFrac™ consistently outperformed conventional methods and even worked under a range of 3-10 pH, confirming the feasibility of the fluid at various locations world-wide. PNNL scientist, Varun Gupta explains, “PNNL’s StimuFrac has outperformed conventional fracking fluids; however, all the different mechanisms responsible for its efficiency are yet to be understood. The research team also thinks that in addition to the overpressure generated by StimuFrac™, it has lower critical pore invasion pressure that provides further advantage over conventional fracking fluids.”

Not only could the fluid be used in EGS applications, but it can also be used in the oil and gas industry. PNNL scientist Carlos Fernandez says “Though we initially designed the fluid for geothermal energy, it could also make unconventional oil and gas recovery more cost-effective and environmentally friendly."

or read the full report here