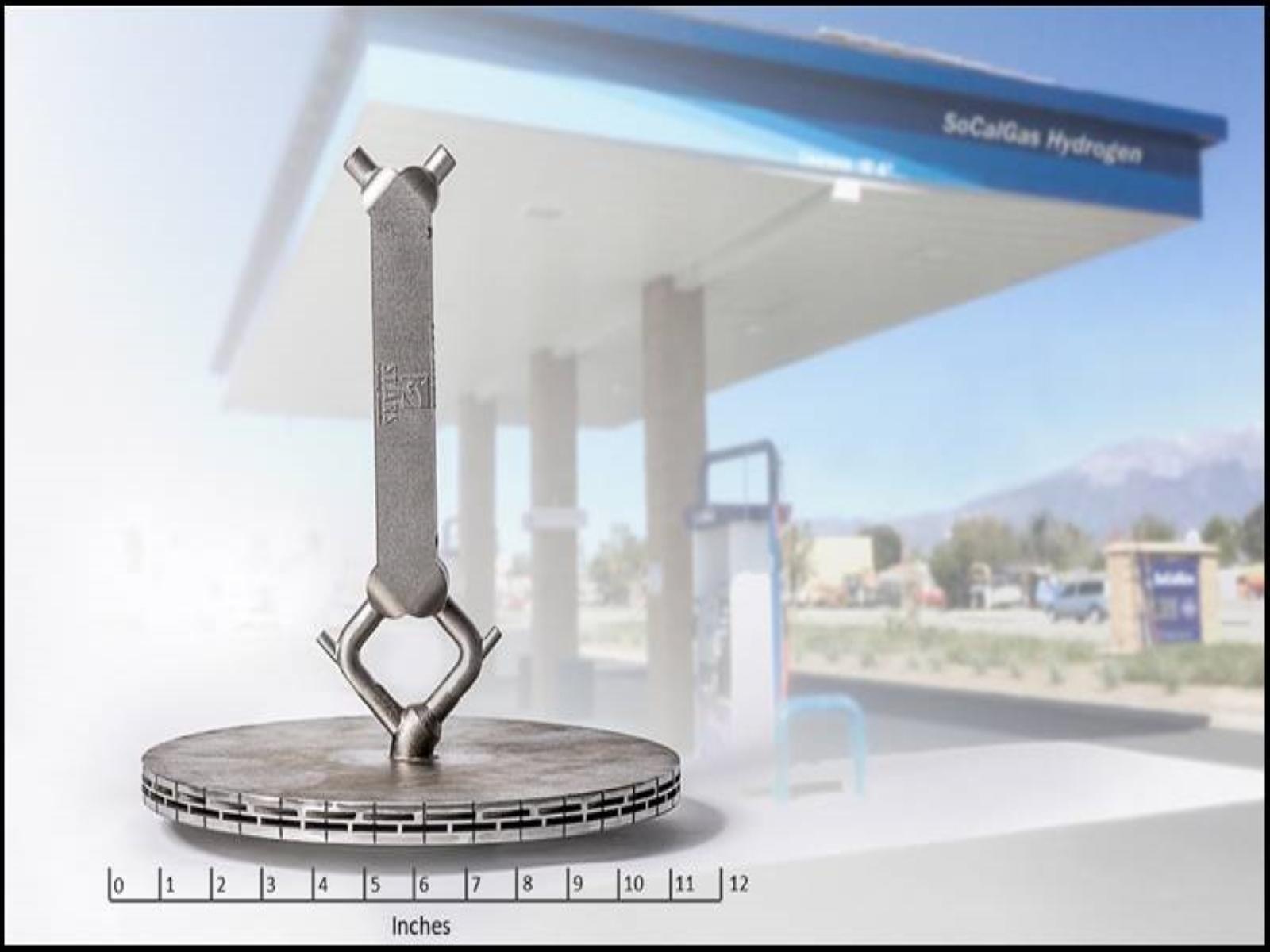 A new hydrogen generator design, about 11-inches in diameter, combined with a microchannel heat exchanger, enables on-site production of hydrogen at fueling stations.

RICHLAND, Wash.—A new technology that generates hydrogen from conventional natural gas, or renewable natural gas made from biomass, could be the next big thing to advance California’s Hydrogen Highway, fuel cell vehicles and trucks and to create other valuable products.

Tiny channels—about the width of a credit card—that transfer heat underpin the technology developed at the U.S. Department of Energy’s Pacific Northwest National Laboratory. These microchannels are critical to efficiently driving the energy into the chemical reactions that produce hydrogen for transportation, electricity generation and other industrial purposes.

The PNNL-developed hydrogen generator was licensed to a Richland, Wash. cleantech start-up company, STARS Technology Corporation. The hydrogen generator features two recent innovations that may drive down the cost of hydrogen. The first is a new additive manufacturing process that has been licensed to both STARS TC and SoCalGas—a Los Angeles-based gas distribution utility that serves 22 million people in Central and Southern California.  The second is a novel spiral reactor design that distributes heat more precisely and improves the reactor efficiency. This design, exclusively licensed to SoCalGas, minimizes the energy required to produce hydrogen while increasing the reactor’s durability and safety.

“One near-term use for this microchannel technology would be making hydrogen for fuel cell electric vehicles,” said Yuri Freedman, senior director of research and development at SoCalGas. “Because this technology offers a small footprint and substantially increases the efficiency of the process that reforms natural gas into hydrogen, it makes hydrogen much cleaner and easier to deliver—you could produce hydrogen anywhere there is a natural gas pipeline nearby. For us at SoCalGas, this is an important step toward meeting our goal to achieve net zero greenhouse gas emissions in our operations and delivery of energy by 2045. This technology could drastically change hydrogen production and use in California, advancing SoCalGas’ efforts to meet the climate objectives of California and our customers.”

“Think of these small, efficient, mass-produced generators as ‘chemical transformers’ similar to electrical transformers on the electric grid,” said Bob Wegeng, president of STARS TC and an inventor of the technology. “They can be placed anywhere along the natural gas distribution system, so it becomes a ‘hydrogen grid’ by providing inexpensive hydrogen for filling stations in quantities that match on-site demand."

The most abundant element in the universe, hydrogen, is typically part of other compounds like water or methane. Natural gas is comprised mostly of methane, one of nature’s most efficient hydrogen carriers. Conventional hydrogen production processes using natural gas can sometimes emit carbon dioxide and use a lot of energy—much of it generated from carbon emitting sources. But with the new hydrogen generator, a variety of more efficient heating approaches, including concentrated solar thermal and inductive solar-electric heating, can be used to heat natural gas and water to break the chemical bonds, emitting 30 percent less carbon dioxide than other common methane to hydrogen processes.

The licensed hydrogen production processes are highly efficient, reducing the thermal energy required to produce high value chemicals. Methane and steam travel through compact spiral microchannels—no more than a few millimeters thick—which quickly and evenly expose the gaseous mixture to heat that drives chemical reactions and liberates the hydrogen from the natural gas and water.

Because the hydrogen can be produced in an economical and clean manner, it is well positioned to support California’s Assembly Bill 8, which dedicates up to $20 million per year to support continued construction of at least 100 hydrogen fuel stations in the state.

This spring, SoCalGas will receive a hydrogen generator from STARS TC, which will include six small modular reactors—each about 10 inches in diameter. STARS TC is largely comprised of former PNNL staff, one of whom was an original inventor of the microchannel technology at PNNL.

Recently, PNNL, STARS TC and SoCalGas collaborated on advancements to the hydrogen generation system, including the spiral microchannel design. This team has also developed a novel process that uses 3D printing methods to build the hydrogen-producing chemical reactors.

“This additive manufacturing process lowers manufacturing costs by reducing parts, forming geometric shapes that would be nearly impossible to create by casting or machining processes and eliminating time-intensive fabrication steps,” said Sara Hunt, a technology commercialization manager at PNNL. “The patented technology includes unique approaches for building structures within the device to enhance heat transfer. It also enables the material to be coated or impregnated with catalysts that speed up the rate of chemical conversion to energy.”

Separately, PNNL, SoCalGas and others are also collaborating on novel new chemical reactors that co-produce hydrogen and solid carbon materials, such as carbon fiber products and carbon nanotubes, which can offset the cost of greenhouse gas-free hydrogen production even further. This combined with the additional use of renewable natural gas means these reactor systems could help SoCalGas as it strives to net-zero emissions by 2045.

Development of the microchannel technology hydrogen generator has been supported by the RAPID Institute and offices in the U.S. Department of Energy’s Office of Energy Efficiency and Renewable Energy, including the Hydrogen and Fuel Cell Technologies, Solar Energy Technologies and Advanced Manufacturing Offices.

SoCalGas' mission is to build the cleanest, safest and most innovative energy company in America. In support of that mission, SoCalGas is committed to achieving net-zero greenhouse gas emissions in its operations and delivery of energy by 2045 and to replacing 20 percent of its traditional natural gas supply with renewable natural gas (RNG) by 2030. Renewable natural gas is made from waste created by dairy farms, landfills and wastewater treatment plants. SoCalGas is also committed to investing in its gas delivery infrastructure while keeping bills affordable for customers. Over the past five years, the company invested nearly $7.5 billion to upgrade and modernize its pipeline system to enhance safety and reliability. SoCalGas is a subsidiary of Sempra Energy (NYSE: SRE), an energy services holding company based in San Diego. For more information visit socalgas.com/newsroom or connect with SoCalGas on Twitter (@SoCalGas), Instagram (@SoCalGas), and Facebook.