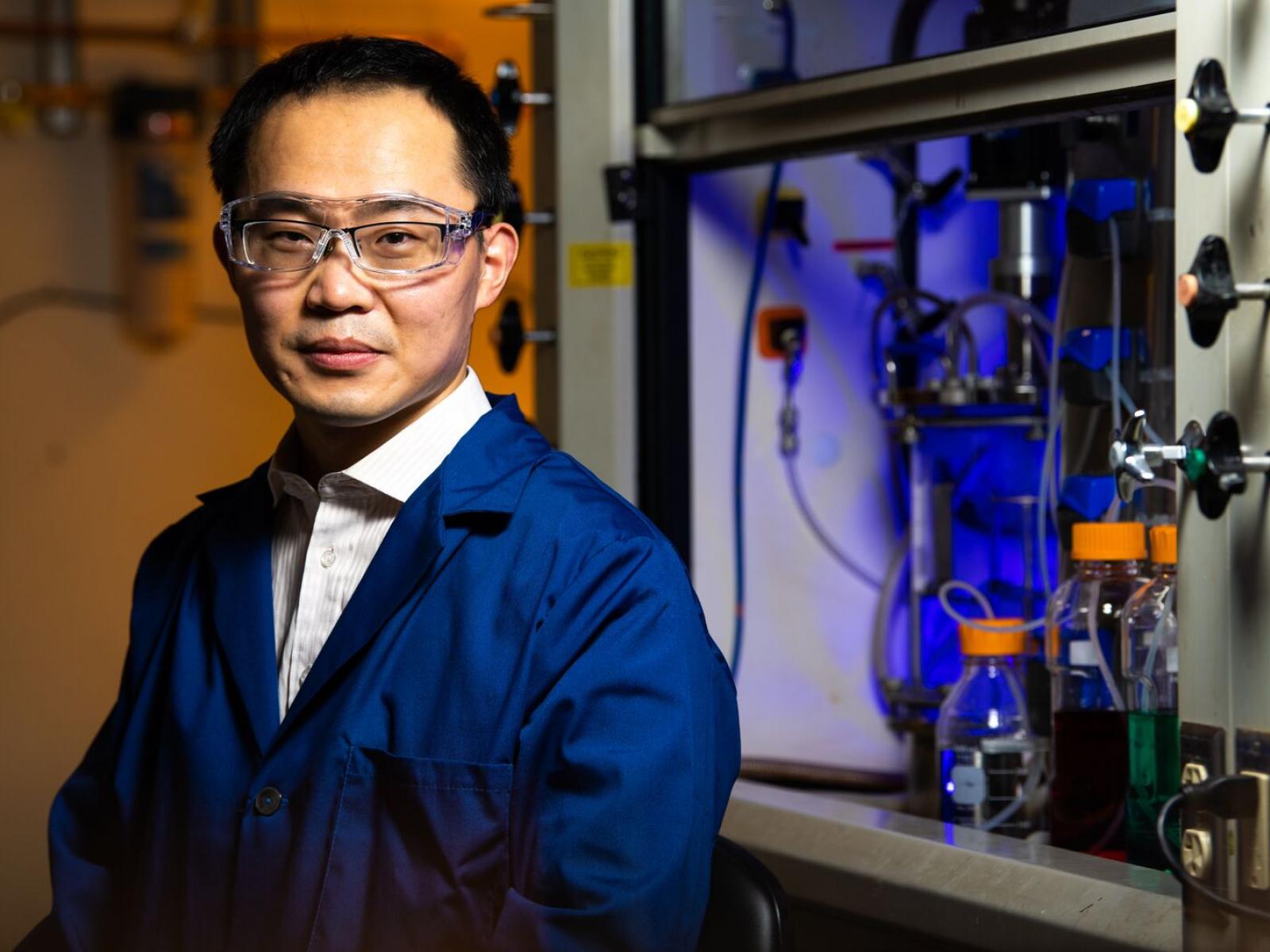 Yujing Bi is first author of the paper in Science that showed how single-crystal, nickel-rich cathodes degrade via molecular gliding.

RICHLAND, Wash.—A promising technology under development by major battery makers has become even more attractive, thanks to researchers who have taken an unprecedented look at one key barrier to better, longer-lasting lithium-ion batteries.

Scientists at the U.S. Department of Energy’s Pacific Northwest National Laboratory report new findings about how to make a single-crystal, nickel-rich cathode hardier and more efficient. The team’s work on the cathode, one critical component in the lithium-ion batteries that are common in electric vehicles today, appears in the Dec. 11 issue of the journal Science.

Researchers around the globe are working to create batteries that deliver more energy, last longer and are less expensive to produce. Improved lithium-ion batteries are critical for broader adoption of electric vehicles.

The challenges are plenty. A battery’s simple appearance belies its complexity, and controlling the complex molecular interactions within is essential for the device to operate properly. Constant chemical reactions take their toll, limiting how long a battery lasts and influencing its size, cost and other factors.

The promise of a nickel-rich cathode: More energy capacity

Scientists are working on ways to store more energy in the cathode materials by increasing nickel content. Nickel is on the drawing board of lithium-ion battery makers largely because of its relatively low cost, wide availability and low toxicity compared to other key battery materials, such as cobalt.

“Nickel-rich cathode materials have real potential to store more energy,” said Jie Xiao, corresponding author of the paper and group leader of PNNL’s battery research program. “But large-scale deployment has been a challenge.”

While nickel holds great promise, in high amounts it can pose problems in batteries. The more nickel in the material’s lattice, the less stable the cathode. High nickel content can increase unwanted side reactions, damaging the material and making storage and handling very difficult.

Exploiting all the benefits from more nickel while minimizing the drawbacks poses a challenge.

Currently the most common nickel-rich cathode is in the form of polycrystals – aggregates of many nanocrystals in one larger particle. These carry advantages for storing and discharging energy faster. But the polycrystals sometimes break down during repeated cycling. This can leave much of the surface area exposed to electrolyte, accelerating unwanted chemical reactions induced by high nickel content and generating gas. This irreversible damage results in a battery with a nickel-rich cathode that fails faster and raises safety concerns.

Scientists like Xiao are trying to sidestep many of these problems by creating a single-crystal, nickel-rich cathode. The PNNL researchers developed a process to grow high-performance crystals in molten salts – sodium chloride, common table salt – at high temperature.

What’s the advantage of a single crystal compared to a polycrystalline material? Think of keeping your food cool while camping. A solid block of ice melts much more slowly than the same amount of ice that comes in small cubes; the block of ice is more resistant to damage from higher temperatures and other outside forces.

It’s similar with nickel-rich cathodes: An aggregate of small crystals is much more vulnerable to its surroundings than a single crystal under certain conditions, especially when there’s high nickel content, since nickel is prone to induce unwanted chemical reactions. Over time, with repeated battery cycles, the aggregates are ultimately pulverized, ruining the cathode’s structure. That’s not so much a problem when the amount of nickel in the cathode is lower; under such conditions, a polycrystalline cathode containing nickel offers high power and stability. The problem becomes more pronounced, though, when scientists create a cathode with more nickel—a cathode truly rich in nickel.

The PNNL team discovered one reason why a single-crystal, nickel-rich cathode breaks down: It’s due to a process known as crystal gliding, where a crystal begins to break apart, leading to microcracks. They found that the gliding is partially reversible under certain conditions and have proposed ways to avoid the damage altogether.

“With the new fundamental understanding, we will be able to prevent the gliding and microcracks in the single crystal. This is unlike the damage in the polycrystalline form, where the particles are pulverized in a process that is not reversible,” said Xiao.

It turns out that gliding motions within the crystal’s lattice layers are at the root of microcracks. The layers move back and forth, like cards in a deck as they’re shuffled. The gliding occurs as the battery charges and discharges – lithium ions depart and return to cathode, straining the crystal ever so slightly each time. Over many cycles, the repeated gliding results in microcracks.

Xiao’s team learned that the process can partially reverse itself through the natural actions of the lithium atoms, which create stresses in one direction when the ions enter the crystal lattice and in the opposite direction when they leave. But the two actions don’t completely cancel each other out, and over time, microcracks will occur. That’s why single crystals ultimately fail, though they don’t break down into small particles like their polycrystalline counterparts.

The team is pursuing several strategies to prevent the gliding. The researchers have discovered that operating the battery at a common voltage – around 4.2 volts – minimizes damage while still within the normal range of lithium-ion batteries for electric vehicles. The team also predicts that keeping the size of a single crystal below 3.5 microns may avoid damage even at higher voltages. And the team is exploring ways to stabilize the crystal lattice to better accommodate the arrival and departure of lithium ions.

Now, PNNL researchers led by Xiao are working with Albemarle Corporation, a major specialty chemical manufacturing company and one of the world’s leading producers of lithium for electric vehicle batteries. In a collaboration funded by DOE, the team will research the impacts of advanced lithium salts on the performance of single-crystal nickel-rich cathode materials by demonstrating the process at kilogram scale.

In addition to Xiao, who is the corresponding author, the first author of the study is Yujing Bi of PNNL. Additional authors are from PNNL, Brown University and Brookhaven National Laboratory. The work was funded by DOE’s Office of Energy Efficiency and Renewable Energy’s Vehicle Technologies Office. Part of the research was done using the National Synchrotron Light Source II at Brookhaven.

Pacific Northwest National Laboratory draws on signature capabilities in chemistry, Earth sciences, and data analytics to advance scientific discovery and create solutions to the nation's toughest challenges in energy resiliency and national security. Founded in 1965, PNNL is operated by Battelle for the U.S. Department of Energy's Office of Science. DOE's Office of Science is the single largest supporter of basic research in the physical sciences in the United States and is working to address some of the most pressing challenges of our time. For more information, visit the PNNL's News Center.  Follow us on Facebook , LinkedIn , Twitter, and Instagram.