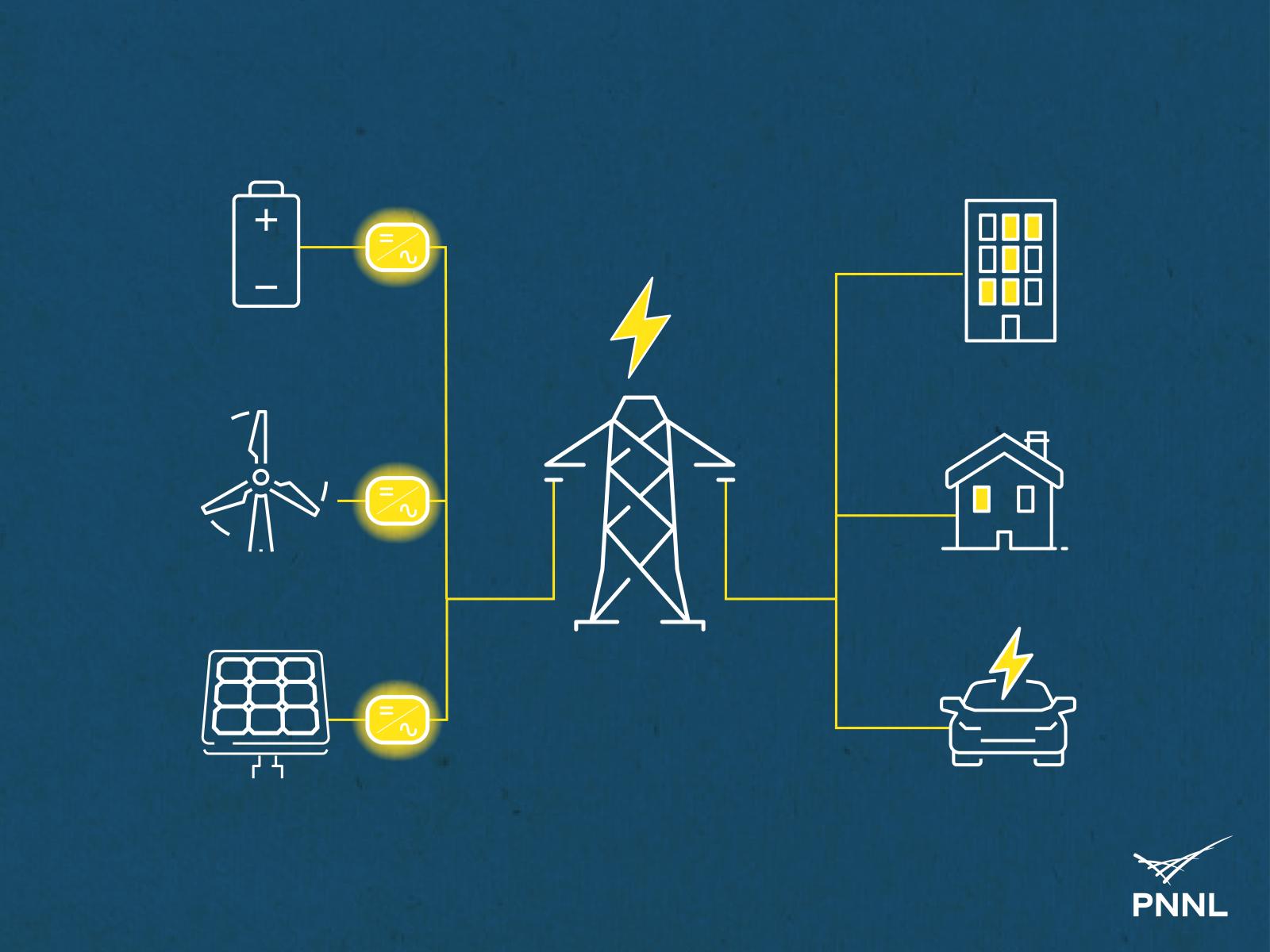 The grid-forming inverter plays a critical role in converting direct current electricity produced at, for example, a solar power farm, to alternating current electricity, the standard that comes from power outlets, while maintaining the stability of power grids.

A Pacific Northwest National Laboratory (PNNL) research team recently developed a new model of an important device that acts as a kind of translator, allowing renewable power sources like wind and solar to better add their power to the electrical grid. The device, called a grid-forming inverter, plays a critical role in converting direct current (DC) electricity produced at, for example, a solar power farm, to alternating current (AC) electricity, the standard that comes from power outlets, while maintaining the stability of power grids.

The model devised by PNNL engineers is designed to allow utility operators to test how to safely add new power sources to the grid in a way that increases power system resiliency and stability. The model specification was recently approved by the Western Electricity Coordinating Council (WECC), a non-profit corporation that assures reliable electricity in 14 western U.S. states, two Canadian provinces, and northern Baja, Mexico. The approval means that the model is available to be integrated into commercially available grid simulation tools used by thousands of utilities in North America and other parts of the world.

The importance of grid-forming inverters for the future grid

A stable grid means people have reliable power and less of a chance of experiencing an outage. As more renewable energy sources begin to change the energy mix of power systems, power system operators are grappling with understanding how inverters influence the system’s behaviors. Inverter-based resources, such as the grid-forming inverter, are essential to grid performance. In the future, as renewable energy becomes a larger part of the energy mix, the power grid will need more grid-forming inverters.

The research originated within PNNL as part of an internal funding program and was further supported by the DOE Solar Energy Technologies Office (SETO) and Wind Energy Technologies Office (WETO). Recently, SETO and WETO awarded a $25M Universal Interoperability for Grid-Forming Inverters (UNIFI) Consortium to further investigate grid-forming technologies. The UNIFI Consortium is a significant collaborative effort of academia, national labs, and the industry, led by National Renewable Energy Laboratory, University of Washington, and Electric Power Research Institute. UNIFI is a multiyear effort to create an ecosystem for grid-forming inverters to bolster the grid and drive technology beyond the state of the art. Wei serves as the PNNL principal investigator and the technical leader for the modeling and simulation area of UNIFI. Wei will work with the PNNL co-leader, Yuan Liu, to further advance the grid-forming inverter modeling and simulation technologies through collaborating with all the consortium members. The goal is to unify the models of various grid-forming technologies and their diverse applications in power systems.

Henry Huang, a PNNL Laboratory fellow and deputy sector manager responsible for the research portfolio of power electronics and renewable integration, noted: “To achieve the national targets of clean electricity and decarbonized economy, inverter-based renewable generation will be an essential part of the future energy mix. The inverters will fundamentally change power system dynamics and thus require new approaches to model and simulate such a system. Wei’s success in grid-forming inverter modeling is a substantial step forward toward the full understanding of the new power system dynamics and the optimal design of controllers for a better future grid.”