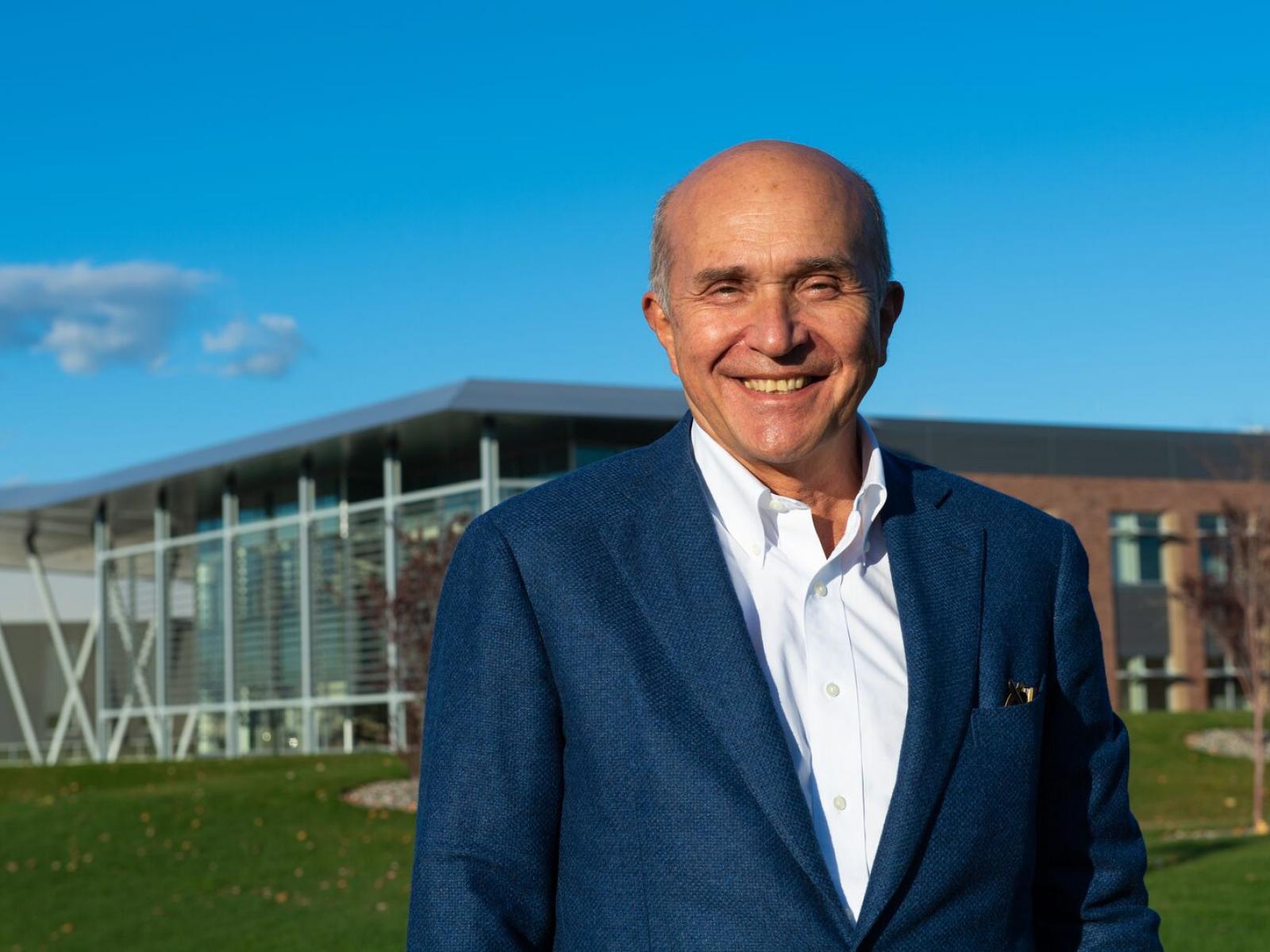 Johannes Lercher is a Battelle Fellow and director of the Institute for Integrated Catalysis at Pacific Northwest National Laboratory. Lercher stands in front of the Energy Sciences Center, the $90 million research facility that was dedicated in late October 2021 at PNNL in Richland, Wash.

The dissection of a frog doesn’t have much in common with catalysis, but an aspiring young scientist has to start somewhere.

A reflective Johannes Lercher marked that high school frog experiment as his starting point in biology and chemistry. Both had to compete with writing for his career ambitions. That, as well as tennis and skiing. He excelled at them all.

Science won. Today, the Battelle Fellow and director of the Institute for Integrated Catalysis at Pacific Northwest National Laboratory (PNNL) is regarded as one of the world’s leading authorities on catalysis, the art and science of speeding up chemical reactions. In early 2021, the German Catalysis Society gave its highest award to Lercher while highlighting his overall scientific work as well as his contributions to the development and understanding of solid catalysts from raw materials. Later in 2021, Lercher was elected to join the German Academy of Engineering.

Lercher, with other leaders in PNNL’s catalysis community, is preparing to move into the recently dedicated Energy Sciences Center. The 140,000-square-foot facility includes 52 laboratories, flexible-use collaborative spaces, conference rooms, and offices for 250 staff and visiting researchers. Designed to meet the Department of Energy’s high-performance sustainable building standards, the facility features an energy- and water-reducing design that takes advantage of ample natural light and uses waste-heat energy generated by high-performance computers housed in an adjacent building.

Lercher praised the juxtaposition of all these efforts in one space and pointed out a people-oriented benefit.

“I think the biggest, most important thing for the Energy Sciences Center, in addition to providing a good workspace, is that it is designed to bring people together,” Lercher said. “I can see that it will help colleagues talk about science.”

Not that kind of gymnasium

Lercher’s own science dialogue got its start at Schottengymnasium in Vienna, Austria, considered one of the most prestigious college preparatory schools in Austria. Alumni include three Nobel laureates. Lercher rhapsodizes today about his 12 years spent learning in the Benedictine tradition of prayer and work, as well as the lifelong friendships he developed. Summers were a mix of hiking and tennis in the Austrian countryside, where he developed the skills to become a tennis instructor and, much later, challenge PNNL colleagues to matches.

After graduating from Schottengymnasium, he pursued a chemistry degree at the Vienna University of Technology. But he also spent two years in theater, working in various roles.

“I had to find myself first,” Lercher said. “After high school, I thought about studying German literature with the goal of being a writer. But chemistry was always an interest. And I’m practical. From the time I exited high school I wanted to be independent, and I didn’t take any money from my parents. Did this influence my decision to pursue chemistry, something that would more likely ensure a good living? Perhaps.”

Both lucky and good

His link to catalysis came by a chance introduction. In the midst of pursuing the doctoral degree at Vienna, he heard the physical chemistry department had a research assistant job opening. It involved catalysis.

“It was interesting,” Lercher said. “And it’s not just in a classroom, it’s on the job, which is a much wilder environment. I was getting hands-on, practical experience. So it was by chance, really. If the institute had offered a job in spectroscopy I probably would have gravitated toward spectroscopy.

“But again, I got lucky. Catalysis is a multi-faceted subject. It’s complex. To define ways to accelerate reactions is a fascinating job. You put a solid into a reactor and that reaction accelerates by 10 times, by 100 times. Then you try to find out why does this accelerate the reaction? How does it act? How does it act when you change the parameters?”

After a postdoctoral stay at Yale University, he returned to the Vienna University of Technology as a university lecturer. From 1993 to 1998, he was a professor of chemical engineering at the University of Twente in The Netherlands. In 1998, he accepted a professorship in technical chemistry at the Technical University of Munich, home of the Research Institute for Catalysis. He lives in Munich with his wife and two cats. The couple have two grown children.

Lercher started at PNNL in 2011. Two years earlier at a Department of Energy conference, he’d chatted with Bruce Garrett, then PNNL’s physical sciences director, and Doug Ray, then a PNNL associate laboratory director. Garrett and Ray were seeking recommendations about who to recruit for the vacant Institute for Integrated Catalysis director opening. Lercher gave several names, but not his own.

The dialogue with Ray continued. They bumped into each other at a 2010 American Chemical Society meeting. Ray suggested Lercher might take the directorship, which he ultimately did.

Roger Rousseau, a PNNL computational scientist and Lab Fellow, met Lercher for the first time when he interviewed for the directorship.

Unrealistic positivism is a negative

The Energy Sciences Center opening will enable Lercher to work in close proximity to a researcher he personally recruited to PNNL.

Oliver Gutierrez, who joined PNNL in 2017 as a staff scientist, studied as a postdoc at the Technical University of Munich starting in 2009. A Mexican professor, who was hosting Lercher in a seminar, had introduced Gutierrez to Lercher. Gutierrez led a catalysis research group focused on industrial applications and alternative processes before arriving at PNNL. He’s had years to get to know Lercher.

“He’s rigorous,” Gutierrez said. “When you do research, it’s easy to become excited, to think you’ve come up with a super catalyst. Johannes will bring you back to Earth. He’ll ask questions. Why is this the case? Is this an experimental error? He pushes against unrealistic positivism. This is how science works. He has provided me with a rigorous way of thinking, not only chemical thinking but scientific thinking.”

That’s the Lercher who Zdenek Dohnalek knows. Dohnalek, a chemist and PNNL Lab Fellow who holds a joint appointment with Washington State University, has served as deputy director of the laboratory’s Institute for Integrated Catalysis since 2013.

“Johannes is one of the few people I know who has a broad knowledge of catalysis that spans from the applied efforts to fundamental concepts,” Dohnalek said. “He has the rare ability to tie it all together, making connections to other fields.”

Lercher’s research addresses fundamental aspects of catalysts and catalyzed reactions that enable catalysis to lower the atmospheric carbon footprint by using radically new approaches to synthesize energy carriers. He aims to do so by catalyzing chemical conversions at significantly lower reaction temperatures and with higher selectivity than currently possible.

Lercher sees catalysis playing a crucial role in tapping into energy sources that do not contribute to carbon dioxide in the atmosphere.