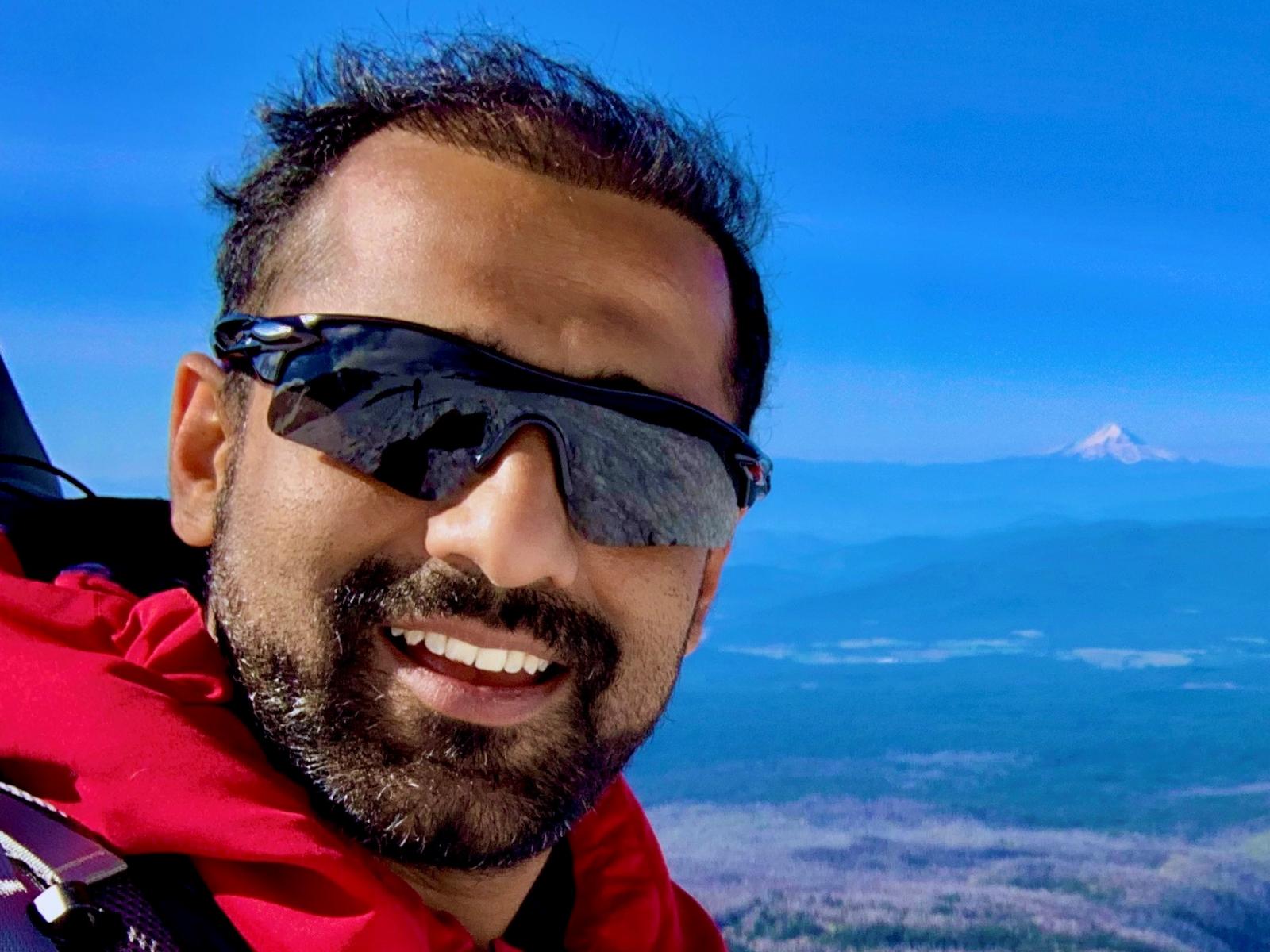 As he plunged one foot in front of the other, Bharat Gwalani wondered, “Why am I doing this?”

Gwalani was on the second day of a two-day ascent of Mount Adams, the 12,276-foot-high peak that is the third highest in the Cascade Range. Occasionally, he would pause, catch his breath, and take in the visual splendor below. Then, he’d turn toward the task at hand and keep going up. After a while, the tip of what appeared to be the summit came into view. He was getting close.

But upon reaching “the top,” he realized he’d merely reached Mount Adams’ notorious “false summit.” There was plenty of trekking and climbing ahead to ascend the true summit.

“Are you kidding me?!” the first-time climber thought to himself.

Gwalani was far from PNNL, where he is a postdoctoral scientist helping lead the Laboratory Directed Research and Development Program’s Solid Phase Processing Science Initiative. The Physical and Computational Science Directorate (PCSD) recently cited Gwalani for “exceptional contributions” to the lab for his pioneering experiments to reveal structural transformations in metal alloys.

His route to PNNL, after earning a PhD in materials science and engineering in May 2017 from the University of North Texas, included working for the world’s second largest steel manufacturer, the Steel Authority of India, Ltd. It was valuable practical experience, Gwalani says.

“I was a process engineer over there in research and development,” Gwalani says of the Bokaro Steel Plant, in industrial eastern India. His responsibilities included developing new types of steels, monitoring the production process, conducting defect analysis, and handling customer complaints.

From Macroscale to Microscale

Working at PNNL has fulfilled Gwalani’s goal of working at a U.S.-based laboratory because, he says, “the research experience in the U.S. is the best in the world.” National labs are especially desirable, he adds, for the opportunity to “work on national and international projects of enormous importance.”

PNNL offers Gwalani the opportunity to delve far deeper interest in structural materials than he could have at the Steel Authority of India.

Gwalani owes part of his knowledge to his mentor, Arun Devaraj, a PCSD materials scientist.

“Bharat is a very self-motivated, curious scientist who is exceptionally driven to solve really hard scientific problems in the field of deformation and phase transformation of metals,” says Devaraj, senior research scientist. “Once he is faced with a research question, he tirelessly attempts to answer that question by looking into all different aspects of that question.”

Gwalani’s current research is aimed at revealing fundamental mechanisms of shear-induced microstructure transformation in metals and metal alloys, complemented by computational modeling,  both for the Solid Phase Processing Science work and for a DOE Office of Vehicle Technology-funded propulsion materials program.

“Yes, I organized the Mount Adams climb,” says Devaraj, an experienced mountain climber and skier. “In spite of being completely new to mountain climbing, Bharat’s spirit and drive to reach the summit was very impressive.”

Reaching the summit was fulfilling, Gwalani says, calling it “the most challenging thing I’ve ever done.” But the glissade down may have been the best part, he says of sliding down a steep snow slope, slowed by an ice axe.

And he may be interested in climbing other Cascade peaks, just as he has explored several hiking trails in the region.

“It’s something where you don’t think you can do it,” he says of climbing mountains, just like life in science. “You challenge yourself and then you are able to do it.”