The Right Stuff to Find the Right Materials 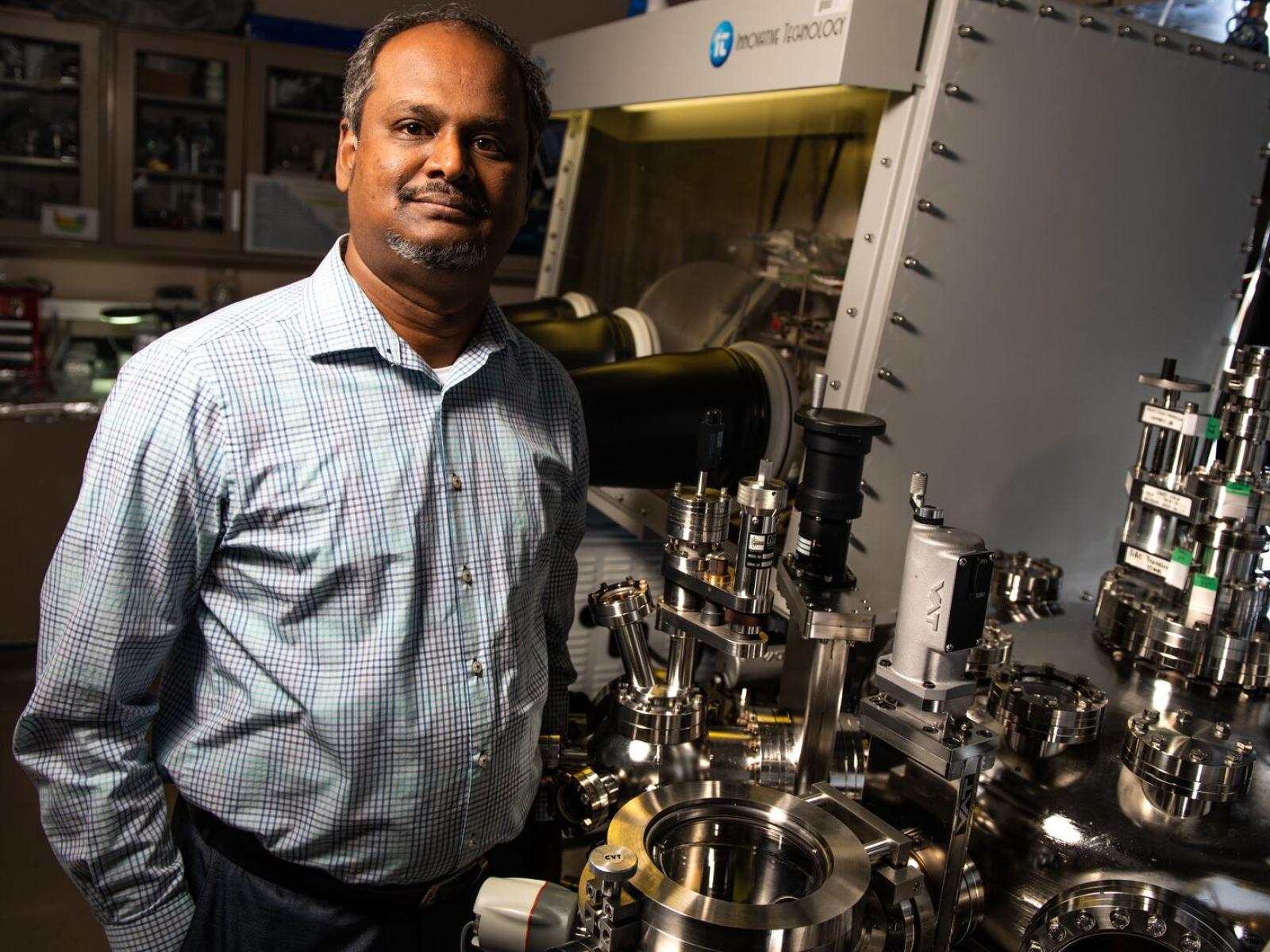 Vijayakumar "Vijay" Murugesan stands next to the X-ray photoelectron spectroscopy imaging system, which is attached to a glovebox via an in situ sample transfer port. The instrument helps Murugesan and other researchers design battery parts then conduct tests in the imaging system. The setup will move to the new Energy Sciences Center later this year.

When he was a 10th grade student at a public school in southern India, Vijayakumar “Vijay” Murugesan submitted a science project that lacked peer review, among other things.

The gist of his written proposal: there’s a solution to ridding the community of the local paper mill’s smelly emissions. Just capture them… somehow. And then—and here’s the important part, so pay attention—send them into outer space.

Murugesan laughs at the memory, which had two classmate collaborators who remain his friends. But Murugesan’s intent behind the proposal—to make a difference and improve society—was genuine and sincere. It helps motivate him today.

“If there is a problem, my philosophy is that there is a material to solve it,” says Murugesan, a Pacific Northwest National Laboratory (PNNL) physicist in the Physical Sciences Division and a team lead for interfacial processes within the Materials Sciences group. “We can learn from nature, or we can use our intuition to design it. Either way, there’s always a material for any problem—we just need to be smart enough to find it or design it.”

Murugesan is among the U.S. Department of Energy (DOE) leaders exploring solutions to design and build transformative materials for batteries of the future.

In 2019, he was named a next-generation leader at the Joint Center for Energy Storage Research (JCESR), a DOE Energy Innovation Hub. Murugesan is a focus area lead for the interfacial science thrust at JCESR—referred to conversationally as “jay-Caesar”—which involves leading the scientific efforts among several labs in multiple institutions. In JCESR, he has performed unique, in situ X-ray photoelectron spectroscopy to capture the spatial-chemical imaging of solid–liquid electrochemical interfacial processes.

Colleagues regard Murugesan as a pioneer in nuclear magnetic resonance (NMR), a tool he uses to probe battery behavior at the atomic and molecular levels, says George Crabtree, JCESR’s director and a senior scientist and Distinguished Fellow at Argonne National Laboratory, southwest of Chicago.

“That’s significant because NMRs are a characterization tool to help identify the ultimate design space for next-generation batteries,” says Crabtree, who has led DOE workshops on next-generation energy storage.

Murugesan and PNNL team members also have been credited with research that is expected to lead to batteries with better performance. “Vijay’s innovation of ‘soft landing’ atoms and molecules on an electrode surface explores how the structure and composition of interfaces promote ion transfer between electrode and electrolyte,” Crabtree says.

With his parents’ backing, Murugesan had an inkling he wanted to pursue a science career. He leaned toward physics, in part because of an energetic secondary school teacher. But first, he had to perform exceptionally well on India’s highly competitive Standardized Eligibility Test. He did so, in both the physics and chemistry sections.

Listening to the advice

But he scored best in physics, earning him a place in Bharathiar University in southern India in the mid-1990s. The university and an internship would play key roles in shaping his career trajectory. After earning his undergraduate degree in physics, he pursued a master’s degree in physics. At about that time, Murugesan worked briefly as an intern at the Indira Gandhi Center for Atomic Research near Chennai. Scientists there urged him to pursue a doctoral degree.

Murugesan returned to Bharathiar with a PhD in his sights. The Indian national laboratory colleagues had told Murugesan it would be easier to get a job as a scientist if he had a PhD.

He is candid about the motivations for his choice.

“I come from a very poor community,” Murugesan says of Erode, located in the state of Tamil Nadu, about 60 miles east of his university. “It’s a community where many of the homes do not have reliable electricity. Some may have electricity for only a few hours a day.”

He earned a doctoral degree in physics from Bharathiar in 2004, authoring a thesis that advanced a theory about developing a better lithium battery. While pursuing the doctorate, he collaborated with Koichi Nakamura of Kyoto University of Advanced Science in Japan on battery-related research.

After three influential postdoctoral assignments, Murugesan arrived at PNNL in 2008. He was interviewing for a job after learning the Lab was about to embark on a significant national role in battery development and storage. PNNL was looking for someone who could analyze materials as well as design them to control conductivity. In other words, Murugesan’s specialty.

As part of the interview process, as with all PNNL job candidates, Murugesan stood before potential colleagues describing his research and entertaining questions.

One person at the back of the PNNL auditorium peppered Murugesan with questions.

“He started with these basic questions,” Murugesan recalled. “He said did you check this? Did you check that? And of course I did and said so, but I’m thinking, isn’t that obvious? Of course I checked.”

“But then he finally asked a question or two that stumped me and made me think in new perspectives.”

The questioner, Karl Mueller, was visiting the PNNL campus, partly to conduct experiments at EMSL, the Environmental Molecular Sciences Laboratory, a DOE user facility located at PNNL, and partly to consider full-time work at the Lab.

“In addition to softballs, I asked him a lot of tough questions,” Mueller says. “His answers were excellent. I was very impressed by him and I remember saying to (PNNL materials scientist) Jian Zhi Hu, ‘You gotta hire this guy. This guy is going to be great.’ I didn’t know at that point I would be his colleague and eventually his mentor.”

As it turned out, PNNL hired both Murugesan and Mueller. The duo has since worked closely on JCESR.

“Vijay has so much insight about the absolute chemical nature of batteries and battery components,” Mueller says. “While he’s a materials scientist, he also has very innate chemical knowledge. These are two very different things.”

“Materials scientists tend to think about macroscopic properties and how all the atoms and molecules behave together to make up a material. Vijay looks at it from the individual chemistry point of view, considering every atom, every bond, and how they’re important and what they do. He has built a team and capabilities around him that is advanced for his career stage and is something that is rarely achieved even by more senior scientists.”

Collaboration will continue to be an important component of JCESR’s development, Mueller and Murugesan agreed. Both pointed to the highly anticipated opening of PNNL’s new Energy Sciences Center (ESC) as a natural contributor to that collaboration.

The $90 million center, paid for primarily by DOE, will accelerate scientific discovery in chemistry, materials science, and computational science. The state of Washington’s Clean Energy Fund paid $8 million to buy scientific instruments, with additional funding from Battelle Memorial Institute and PNNL. It is expected to open later in 2021.

The center will bring together researchers of varying expertise, which enhances the potential for scientific discovery, Murugesan says.

“People who may not actually be directly involved in battery research will be down a hallway,” he says. “The catalysis team will be right there. There’s a lot of overlap between our two disciplines. This building offers the chance for random interactions, for us to sit together and join forces and come up with better materials.”

It’s been a long time since Murugesan envisioned launching stinky emissions into space. Today, his goals remain equally formidable. And as he prepares to enter the ESC later this year, he does so with a world of experience, the potential for transformative collaboration, and the belief that solutions are around the corner, just waiting for the right materials.