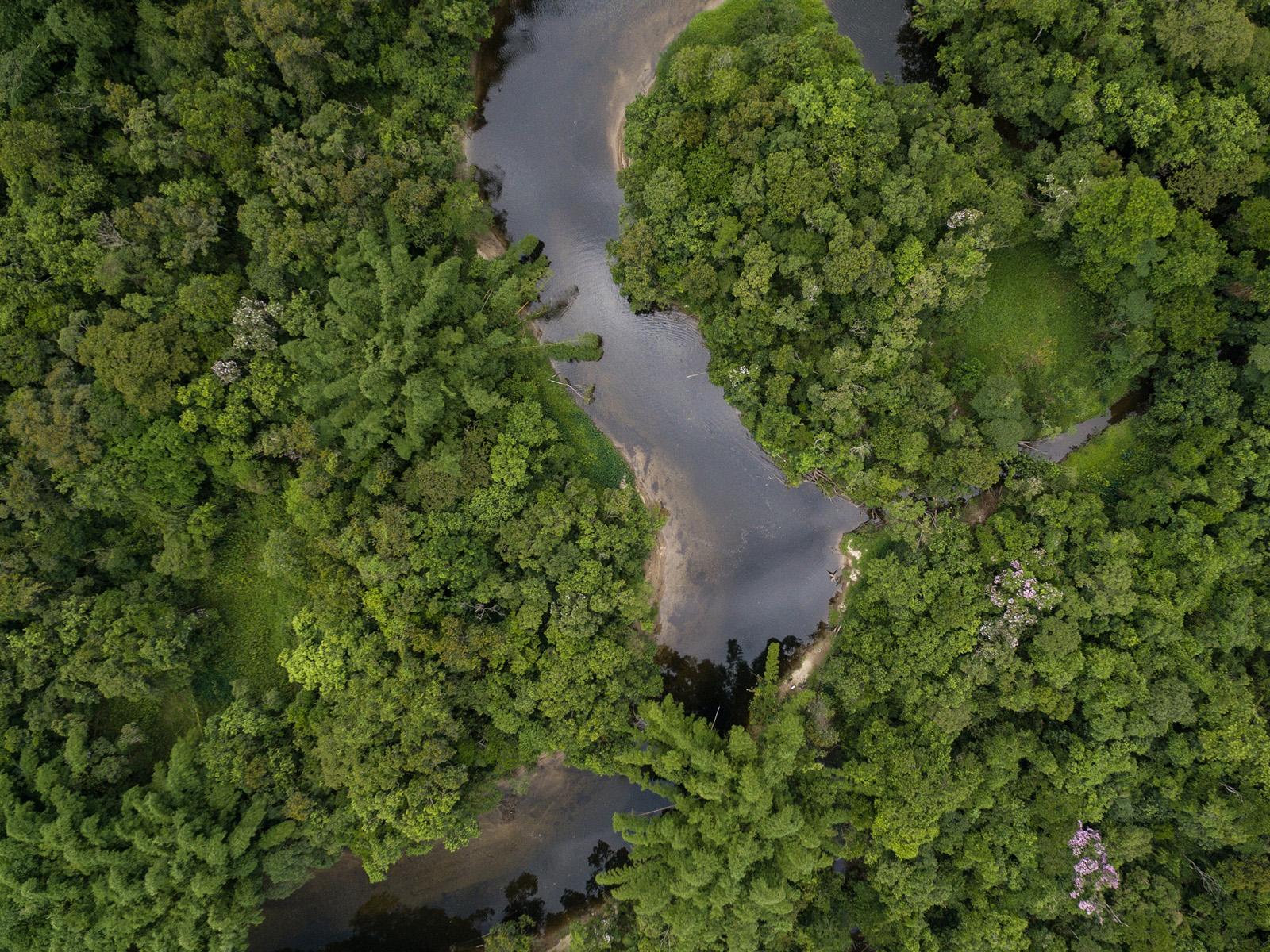 Human influences such as smoke and pollution influence the Amazon atmosphere. Models and measurements show pollution spurs the production of harmful particles much more than previously thought.

Five years ago, in March 2014, researchers spent three hours packed aboard a steamy Gulfstream-1 research aircraft as it zig-zagged between pristine air over the Amazon rainforest and polluted air nearby. It was like a trip back (and forth) through time, as scientists weaved between the two vastly different settings, snagging air samples characteristic of today’s industrial environment as well as samples of unpolluted air, like that before the industrial age.

An international team of scientists led by PNNL’s Manish Shrivastava has analyzed some of the data and found that human-caused pollution spurs the production of climate-changing particles known as secondary organic aerosols much more than previously thought. The team published its results in Nature Communications.

The findings illustrate how pollution from cars, power plants and other sources combines with natural emissions from trees in the Amazon to spur a marked increase in tiny particles that can reflect or absorb sunlight, help create clouds, change rainfall patterns, and determine how carbon flows between the land and atmosphere – all with dramatic effects on our planet.

The result comes from a research campaign, known as GOAmazon, led by the Atmospheric Radiation Measurement Research Facility, a Department of Energy Office of Science user facility. The campaign focused on the region near and around Manaus, a Brazilian city of more than 2 million people that is surrounded by tropical forests for hundreds of miles. Scientists refer to the vast forest canopy around Manaus as a “Green Ocean,” giving the campaign’s name its first letters.

The region offers a research environment hard to find anywhere else on earth. On one side of an undefined boundary is a straight-up tropical rainforest with crystal-clear air and levels of 300 aerosol particles per cubic centimeter; on the other side is the air over Manaus, with particle concentrations 100 times higher due to human activity.

“To really understand how pollution has influenced the atmosphere, we need to compare today’s atmosphere with times before the industrial age,” said Shrivastava. “This is challenging; of course, we cannot go back in time. But the Amazon is one of the few places on earth where we can study atmospheric chemistry both past and present simultaneously.”

On that sunny day five years ago, the ARM aircraft ambled from one side of the boundary to the other, flying about the length of a football field every second, taking air samples from the pristine and then the polluted.

“The region provides a wonderful natural laboratory to understand how anthropogenic emissions have an impact on atmospheric chemistry and climate,” said Shrivastava.

While only a tiny sliver of our planet provides the unique opportunity for this study, the findings apply to atmospheric chemistry that takes place everywhere on earth every moment.

This chemistry is behind the refreshing scents of a forest meadow or fresh flowers. When those scents hit our olfactory nerve, we’re actually sensing an array of gases, such as carbon-containing isoprene and terpenes, which are given off naturally by trees and other vegetation. The gases contribute to ozone and other forms of haze that affect the amount of sunlight reaching the earth.

When these natural carbon emissions interact in sunlight with nitrogen oxide – naturally emitted from soils but also a common product largely emitted by human activity – one result is the formation of tiny particles known as secondary organic aerosols. Though aerosols are tiny, much smaller than the width of a human hair, they are no bit players when it comes to earth’s climate. They’re an important component in the planet’s energy and carbon cycles, determining in part the fate of the planet’s vast reservoir of carbon and how it flows between the land and the atmosphere.

Shrivastava and colleagues sought to learn how anthropogenic emissions increase the production of these naturally occurring carbon particles – just how extensive the effects of human activity are in spurring the transformation of gases ejected from vegetation to these powerful climate-changing particles.

The team integrated this data with other laboratory measurements to develop an advanced computer model to simulate chemical reactions that form particles in the atmosphere. The model does double duty, reproducing both pre-industrial and present-day chemistry. Most models have largely been created based on present-day conditions; the Amazon measurements provide information about pre-industrial chemistry conditions that improved the model’s predictive abilities.

The team found that nitrogen oxide emitted from human activities like traffic and oil refineries promotes the creation of these particles from natural forest carbon much more than previously thought, causing an average increase of anywhere from 60 to 200 percent and even up to 400 percent in some cases. That’s compared to the 20 percent previously estimated by scientists based on data in more polluted continental locations.

The team also showed that most of these secondary carbon-containing particles were formed by this phenomenon. 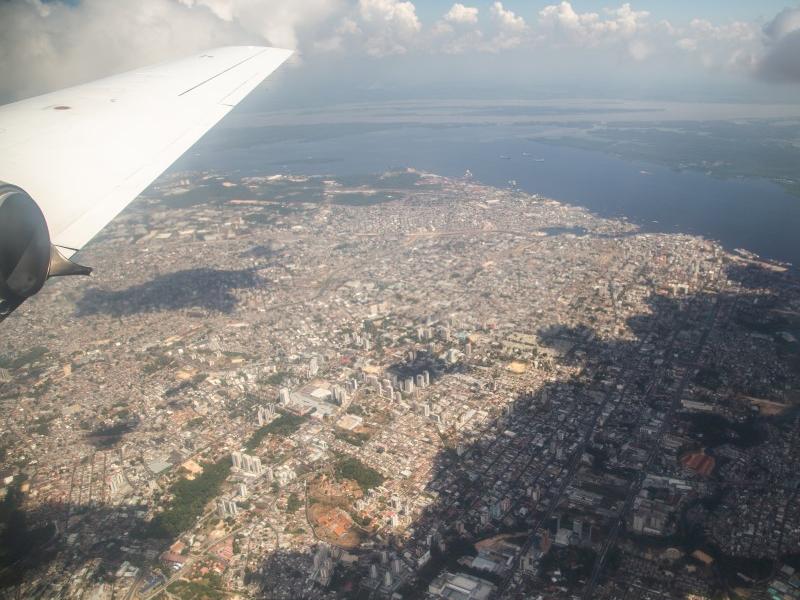 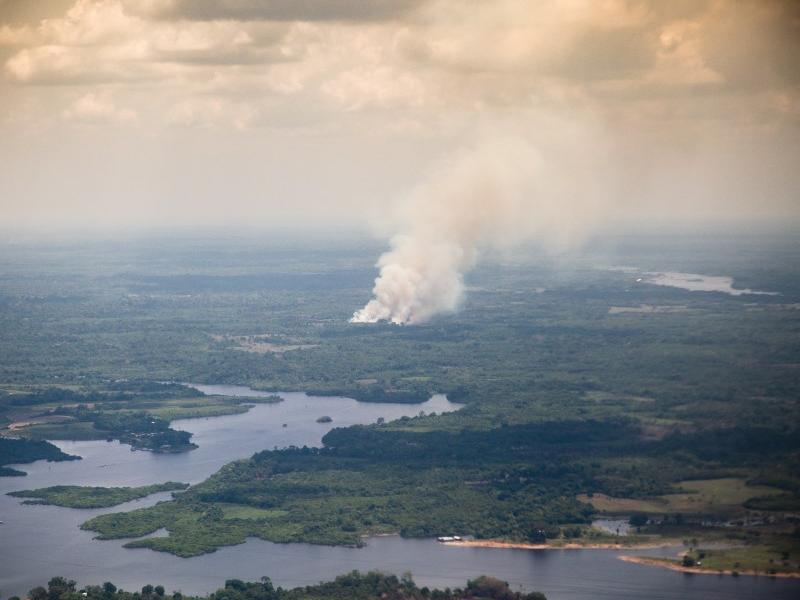 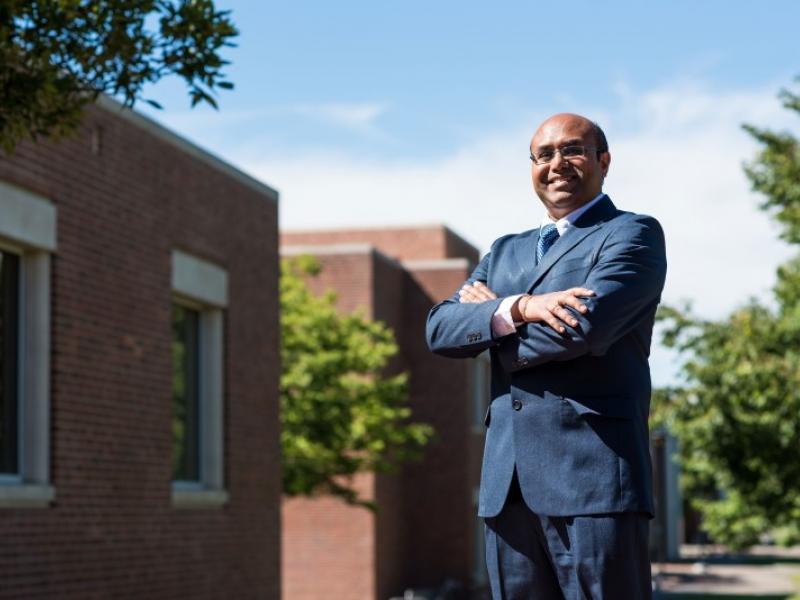 “The impact of pollution in creating secondary organic aerosols has been very difficult to tease out,” says Shrivastava. “Our findings indicate the earth’s atmosphere in many continental locations has already been substantially altered by human activities, and there’s a much larger and widespread impact than has been appreciated.”

In their paper, Shrivastava and the other authors conclude: “Our results provide a clear picture of how anthropogenic emissions are likely to have greatly modified biogenic SOA [secondary organic aerosol] formation since preindustrial times over the Earth, and imply that rapid urbanization in future years might substantially enhance biogenic SOA formation in the pristine forested regions of the Amazon.”

Shrivastava is one of many scientists worldwide who are creating complex computer models to explain the atmosphere and the earth system. He describes the atmosphere as “a large chemical reactor that constantly processes both natural and human emissions, and in turn affects both climate and human health.”

The work was funded by the U.S. Department of Energy Office of Science and other organizations, including several Brazil-based research institutions. Researchers tapped the computational resources of EMSL, the Environmental Molecular Sciences Laboratory, an Office of Science user facility. Shrivastava is continuing related works thanks to a DOE early-career award he received last year.