From microscopic bacteria in river sediments to vast watersheds to global-scale data and inquiries, a PNNL scientist plays a big research role 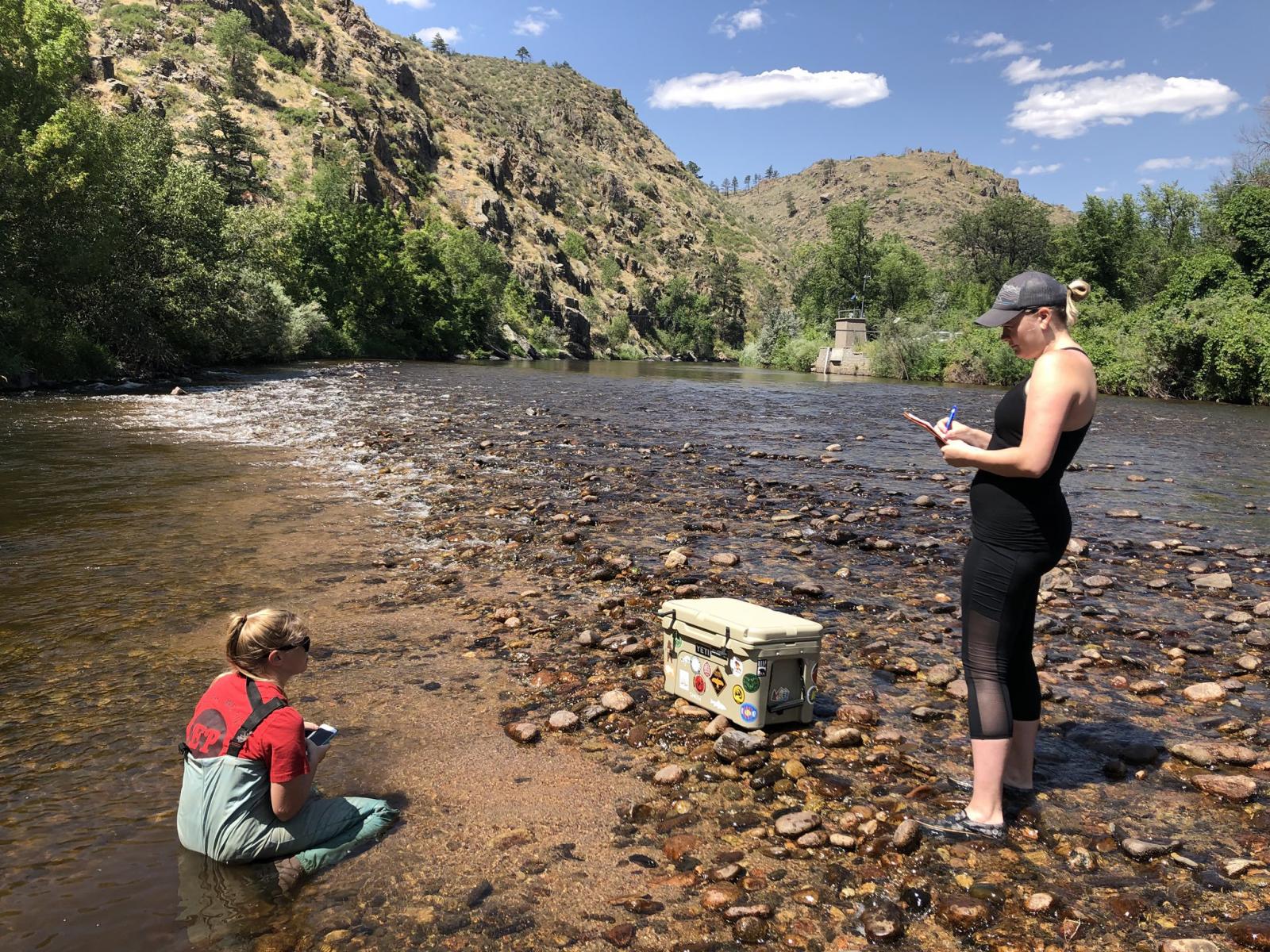 In the summer of 2019, volunteer scientists across the world stooped, dunked, waded, and dipped to get water and sediment samples at 98 river sites in eight countries spanning three continents.

All that effort, which netted more than 7,000 samples, was for a two-year-old global research consortium called the Worldwide Hydrobiogeochemistry Observation Network for Dynamic River Systems (WHONDRS).

“I just want to collaborate,” said Israeli microbiologist Shai Arnon, who works at the Zuckerberg Institute for Water Research at Ben-Gurion University of the Negev. He pulled his samples from the Jordan River, a three-foot-deep stream that threads though water-scarce Israel.

Bongkeun “BK” Song, a microbial ecologist at the Virginia Institute of Marine Science, took samples in his native South Korea from part of the Naktong River that is subject to seawater intrusions because of scheduled dam openings.

“I was excited about the project,” he said of WHONDRS, which has since resulted in spin-off collaborations for him in the United States and Korea, including analyzing project samples at his own lab in Virginia.

WHONDRS is the brainchild of PNNL ecologist James Stegen, who sees the project, funded by the U.S. Department of Energy (DOE), as a way for watershed scientists to integrate physical, chemical, and biologic processes within river corridors.

Of river corridor science, he said, “We have much to learn about how processes play off each other to lead to emergent behaviors.”

Stegen and others call river corridors “the great integrators” of dynamically intermixing processes. Yet how does that intermixing happen? And how can scientists describe it and use that knowledge to predict the future of river corridors?

It’s a hard puzzle to crack. For one, river systems—3.5 million in the continental United States alone—are so complex that a compound adjective is required to fit in all the factors: hydrobiogeochemical.

In addition, river corridors have interlocking layers that include surface water, sediments, groundwater, stream banks, local vegetation, and the microbial life inhabiting all of these realms.

Add to all that the fact that river corridors exist within the broader complexity of watersheds. As small as 40 square miles or as large as a million square miles, watersheds are hydrologically and geographically distinct features that organize all terrestrial systems, through which water, nutrients, and energy flow from mountain tops to the ocean.

Through watersheds, all the intermixed biogeochemical complexities of land, vegetation, animal and microbial life funnel downward to a river, lake, or bay.

Despite these radiating layers of complexity, WHONDRS embodies a long-term grand plan beyond collecting world-class datasets: a set of general principles that apply to river corridors worldwide.

A Holistic Look at Rivers

WHONDRS is enabled by efforts of dozens of collaborating scientists like Arnon and Song in what Stegen calls “an open, community-enabled effort that emphasizes standardized collection protocols and data-storage formats in order to reveal transferable principles.”

WHONDRS has two major sampling campaigns behind it already, summer efforts in both 2018 and 2019. Meanwhile, the collaboration ships compact kits for free (including coded vials, gloves, filters, needles, other gear, and a shipping label).

Researchers use them to sample surface water for small campaigns and for spot-sampling. Samples are returned to PNNL for analysis.

A lot of data are already in hand, along with more than 8,000 physical samples now being analyzed at PNNL and elsewhere.

All that data will supply “a tremendous opportunity to reveal simple but powerful principles, despite the tremendous hydrobiogeochemical complexity of river corridors,” said Stegen. “We are looking at the systems holistically, working across disciplinary boundaries to the benefit of all.”

So far, WHONDRS collaborators include those volunteer scientists across the world and researchers at five other national laboratories, as well as universities and industry. Their involvement can be one-time sampling or a commitment to multi-parameter sensors for continuous monitoring.

“We are looking at the systems holistically, working across disciplinary boundaries to the benefit of all” - James Stegen

On the industry side, Stegen and others are working with geophysicist (and DOE lab veteran) Roelof Versteeg. He directs Subsurface Insights, a New Hampshire company that builds software tools and develops hardware to monitor ecosystem behavior.

“Rivers are integrators of fluxes,” said Versteeg, who is developing robust riverside sensors and a data pipeline for WHONDRS that will provide contextual data on local rivers from sources like the U.S. Geological Survey and the National Oceanic and Atmospheric Administration.

“Once you have such data,” he said, “you have a scientific understanding of how a system behaves.”

Collaboration: The Place to Be

Stegen is most comfortable, and energetic, in collaborative science spaces like WHONDRS.

During this week’s meeting of the American Geophysical Union, a five-day rush hour of earth and space scientists from around the world, he is delivering his signature message in two venues: an update on WHONDRS and a town hall on a geosciences methodology called coordinated open science by design.

The methodology is based on scientists agreeing to conduct their research as a community network; employ standardized methods; make their data and models open and interoperable; and to integrate process knowledge across disciplines.

“Across disciplines,” said WHONDRS co-investigator Kelly Wrighton, a microbial ecologist at Colorado State University, “there has been this growing consensus that we can do a lot more, scientifically, if we do it together. We can ask bigger questions.”

Take the issue of microbes. As much as 90 percent of metabolic activity in riverine environments can be from these tiny life forms living in sediments. It is fine to know all about microbial activity in one local system, she said, “but what about (worldwide) conserved data, across sites?”

Not long ago, she remembered, onetime DOE program manager David Lesmes (now at the U.S. Geological Survey) posing a question to both her and Stegen: “What kinds of questions are bigger than you can do alone?”

One certainly is: How can scientists, often trapped in research silos, break out to address, in a coordinated way, the immense puzzle of river corridors?

Rivers pulse, pause, and rush along the rock, soil, and vegetation of their corridors through a myriad of terrains. These waterways deliver critical ecosystem services to cities, farms, power stations, and industry.

Yet data is often scarce regarding the physical, chemical, and biological processes within river corridors. Measurements of water levels or temperature may be broadly available, for instance, but in other areas, including microbiomes in river sediments, data is scarce.

Wrighton came to the WHONDRS project thinking that data on river-corridor microbiomes would be as common as doughnuts.

“We have more genomic data from fistulated moose in Alaska and from deep shale and arctic lakes than we do for river systems in the United States,” said Wrighton, who was part of the moose study. “It’s mind-blowing.”

For the WHONDRS project, Wrighton has become a kind of data traffic cop.

“I shepherd samples back and forth,” she said, in a loop that includes PNNL, other national laboratories, universities, and the DOE’s Joint Genome Institute (JGI), which is now sequencing the samples.

Most of the project’s field samples make their way the Environmental Molecular Sciences Laboratory (EMSL), a DOE Office of Science user facility located at PNNL. In part, the samples are analyzed by Fourier-transform ion cyclotron resonance mass spectrometry (FTICR-MS), which delivers ultra-high mass resolution and accuracy.

“We can get down to very specific compounds,” said WHONDRS team member Robert Danczak, a PNNL ecosystem science postdoc. He’s helping develop open-access tutorials, software, and community tools (including through GitHub) to ease newcomers into FTICR-MS data and its advantages.

At PNNL, Stegen is a kind of avatar for watershed-systems research, from microbial ecology in river sediments (his main scientific interest since arriving at the lab) to ecosystem-scale inquiries.

For one, he is actively developing an Open Watershed Science by Design vision with the DOE and its Biological and Environmental Research (BER) program.

The goal is to achieve a predictive understanding of watersheds, in part through the kind of broad, interdisciplinary collaboration that Stegen and the DOE itself espouse.

The workshop report points to emerging partnerships between BER and other federal agencies. At the tip of that spear are efforts to make data, software, and models “interoperable”—that is, cast in a common scientific language.

While JGI supplies large-scale genomics data for DOE-relevant issues, two of these issues are in Stegen’s research backyard: organic matter chemistry (heavily influenced by microbial communities like those studied at PNNL) and biogeochemistry, a term for the environmental processes that link biology with chemistry in ecosystems.

An Ethic of Collaboration

Stegen is also a co-investigator in PNNL’s Subsurface Biogeochemical Research (SBR) program, a science focus area (SFA) sponsored by the DOE. Its target is investigating the hydrobiogeochemistry of river corridors and watersheds.

In September he helped organize a multi-lab, multi-agency watershed workshop at PNNL. At the AGU conference, he is also co-organizing a workshop conference focused on developing an international collaborative network of the world’s critical-zone observatories.

Stegen’s core ethic of scientific collaboration is manifest in relationships with other national laboratories with watershed science SFAs. Two of them, like PNNL, do large-scale studies: Lawrence Berkeley National Laboratory, which concentrates on watershed function, and Oak Ridge National Laboratory, where the SFA focus is on biogeochemical transformations at critical interfaces.

Three others national laboratories have additional key roles, looking at watersheds in terms of wetlands, groundwater quality, and the biogeochemistry of radioactive elements called actinides.

WHONDRS, of course, looms largest in Stegen’s life these days, and also supplies the most vivid example of collaboration in action.

For one, the project offers free access to sampling kits, molecular analysis, and a growing archive of curated data related to river-corridor hydrology, biogeochemistry, and microbiology. These data are all available for free on a DOE data archive called ESS-DIVE.

The right data will improve predictive models in an era when they are sorely needed, said Stegen. Floods, droughts, and other river-corridor disturbances are more frequent than ever.

Of course, all that data belongs to everyone.

Said Stegen, “We started—and continue to operate—WHONDRS as a resource by the community and for the community.”

Search PNNL’s website for stories on WHONDRS scientists, data, campaigns, and advances. To contact WHONDRS, or for more information, go to WHONDRS@pnnl.gov, @WHONDRS, and https://whondrs.pnnl.gov.