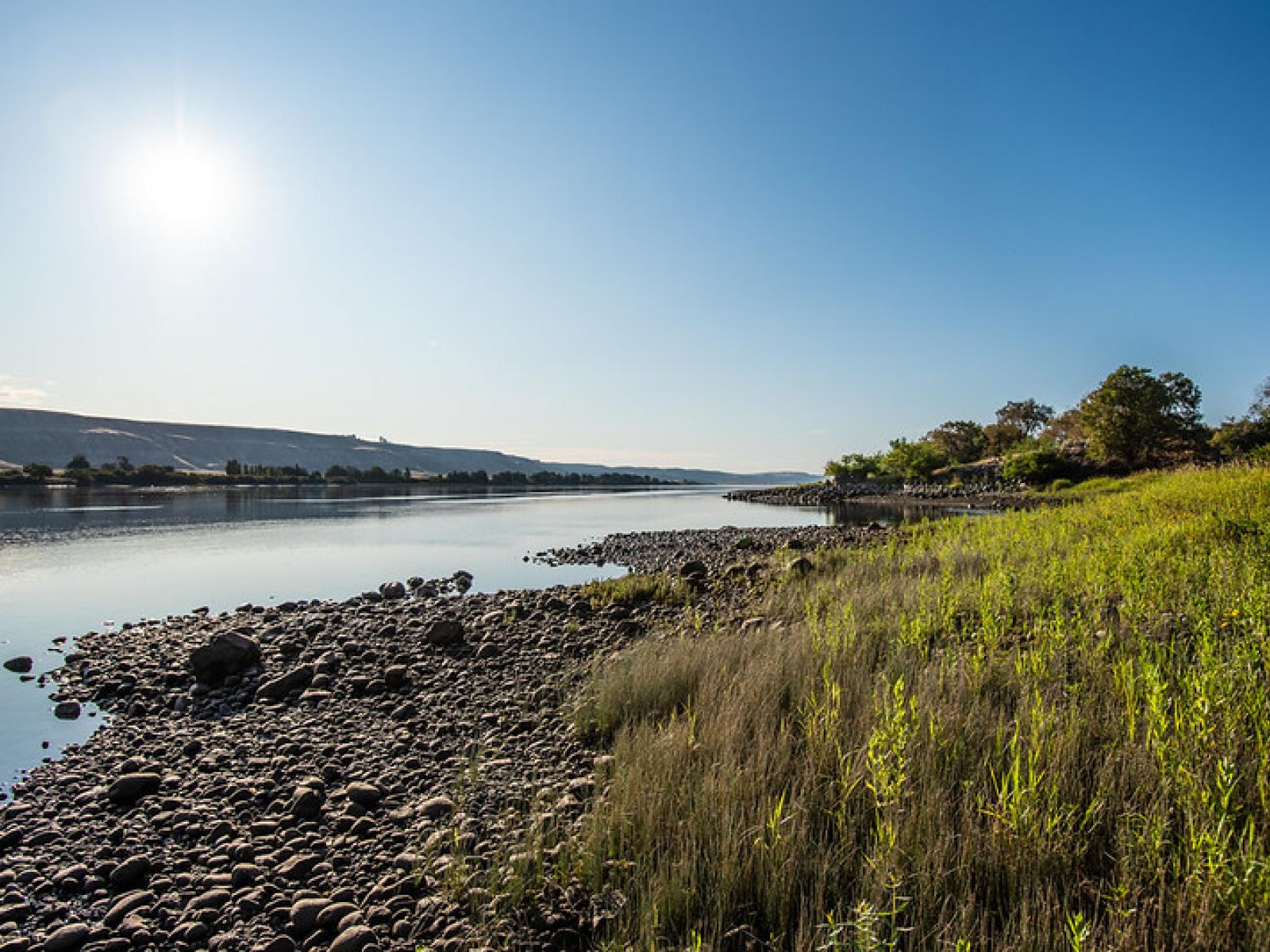 An (unscientific) view of a watershed, taken along the Hanford Reach of the Columbia River in eastern Washington State.

We are all citizens of watersheds, the terrestrial landscapes that determine how much water we have, how clean it is, where it goes, and how fast.

If you want to see one, just look down. Watersheds are hydrologically and geographically distinct and contain a complex variety of surface features that capture and transport water and snowmelt. By the classic definition, the water funnels downward along slopes; moves through streams, rivers, and soils; and discharges at a single outflow point, like a river, lake, or bay.

U.S. watersheds―defined in terms of four levels of nested hydrologic unit types―can be as small as 40 square miles (subwatersheds) or can span more than a million square miles (basins) and cover dozens of states.

Scientists have long used the natural boundaries of watersheds to study fluvial hydrology, groundwater dynamics, and other issues.

What is more, he noted that watersheds are handy constructs: “essential integrators” of the many processes―geologic, hydrological, chemical, and biological―within landscapes that collect, direct, and disperse precipitation.

Scheibe is the principal investigator for the PNNL’s Scientific Focus Area (SFA) project on watershed science, sponsored by the U.S. Department of Energy’s Subsurface Biogeochemistry Research (SBR) program. The focus is river corridor and watershed hydrobiogeochemistry. His co-investigators at PNNL are Xingyuan Chen, another Earth scientist, and James Stegen, an ecologist.

They hosted a 2019 SFA Community Watershed Workshop on September 11 and 12 to provide an overview of current research advances, gaps, and opportunities. Nearly 100 attendees listened to pop-up talks, perused posters, traded ideas during meals, and broke into small groups to drill down into single issues.

The first such watershed science workshop was held September 23 through 25, 2018, in Crested Butte, Colorado, and sponsored by Lawrence Berkeley National Laboratory (LBNL).

For example, instead of science in silos, he said, “now we know it’s the interfaces where things are really happening.”

In part, that new approach has accelerated because of the Biological and Environmental Research (BER) program, which funds the SFAs. BER contributions are outlined in a recent draft report, “Open Watershed Science by Design,” based on a January 2019 BER workshop co-chaired by Stegen.

The report refers to untapped potential partnerships that exist among BER and other federal agencies, which could boost the exchange of information and the interoperability of data, software, and models.

‘A Lot to Be Learned Here’

During the workshop’s 25 pop-up talks, researchers from universities and national laboratories took less than 10 minutes each to offer glimpses at how fine-grained watershed science can get.

University of Illinois water resources scholar Praveen Kumar, by a remote video feed, talked about the potential for machine learning and artificial intelligence to contribute insights on the dynamics of natural watershed systems by combing for patterns in experiments and hypotheses from observed data.

Chen, one of the PNNL SFA co-investigators, gave an overview of the PNNL’s SFA. She called Hanford Reach “a perfect testbed” for investigating watershed science. Researchers are looking at everything from microbial metabolism at the pore scale to reach-scale hydrologic exchange fluxes.

Amanda Hohner, a civil engineer at Washington State University looked at the impact of black carbon from wildfires on watersheds. Her university colleague, Sarah Roley, a biochemist, continued the disturbances theme with a look at how the immense hydrologic variability of floods, droughts, and other perturbations affect the respiration of soil microbes and benthic and planktonic organisms.

In words that could sum up the whole workshop, she said, “There is a lot to be learned here.”

Judson W. Harvey, a Virginia-based senior hydrologist with the U.S. Geological Survey, made a case for paying aggressive scientific attention to U.S. river corridors. “They account for 70 percent of water use,” he said, “and are the locus of floods and contamination, along with threats to property values, recreational opportunities, and the health of aquatic ecosystems.”

One path forward that Harvey offered is moving faster to integrate physical and statistical models.

Among the workshop speakers were residents of the local watershed in Richland, Washington, where three rivers intersect. Among them was Peter J. Graf, a senior biologist with the Grant County (Washington) Public Utility District, part of an eight-dam system in the Columbia River basin that affects sport and commercial fish stocks as far away as Alaska.

In a day-one presentation, he talked about the impacts of hydropower dams on fish and wildlife―and on what scientists add in understanding related issues, including water quality and recreation.

In conversation with Graf near the posters was Chen, who helped organize the workshop. “We can learn a lot from stakeholders,” she said. “We just want to follow what the needs are.”

Emily Graham, a PNNL river ecologist whose work has touched on the Great Lakes, northern peatlands, Alaskan permafrost, and Hanford Reach biogeochemistry, liked seeing interested citizens at the workshop. After all, outside of work, she is one herself.

“You study where you work and you live and you have a deeper connection to everything you see,” said Graham. “We all use the river.”

Vanessa L. Bailey, a PNNL microbiologist, is an expert in the physical structures of soils and their carbon cycle. Her research happens at the pore scale, sometimes measured in nanometers, where a grain of sand is a boulder and a drop of water is a waterfall. But she enjoyed even presentations that evoked vast watersheds.

“The scale I always start at is the landscape,” said Bailey, though she will argue that most consequential watershed chemistry starts at the pore scale. “If my boots aren’t on the ground, there is no science driver.”

James H. “Jim” Mather, a PNNL atmospheric scientist, operates at a scale larger than most watersheds―the dome of clouds, turbulence, heat fluxes, and air that determine climate and weather. He is technical director for the DOE’s Atmospheric Radiation Measurement (ARM) user facility, which manages fixed and portable observatories all over the world.

“The problems they have with big data in this community are the same problems we have,” said Mather after observing the two-day workshop as a science outsider. “You organize the data, and then you can apply machine learning to look for patterns, structure, and correlations in the data. It helps to take away the specifics of your discipline to see what fundamental problems there are to solve.”

Hyun Seob-Song, a data-integration expert, presented at the workshop and brought along a poster. He is a metabolic modeler with a microbiome engineering research group at the University of Nebraska-Lincoln.

“The watershed is a new area for me,” said Song. “It’s time for me to think about how to contribute to this project―to make our ideas alive.”

“Really, the more ideas the better,” Stegen advised one breakout-session cohort―four tables of scientists from disparate labs, universities, and disciplines. They were brainstorming questions of carbon chemistry. “Let your mind float free,” he said. “Shoot for 10 to 15 ideas.”

At one table, a group plastered a nearby wall with sticky notes, then finally decided on a plan to use machine learning for “massive, automated, high-quality, standardized data collection” along river corridors. Before that, however, there were detours into Pokémon, vintage television, and citizen science.

The PNNL SBR-SFA researchers who organized the workshop said the breakout sessions, soon to be memorialized in white papers of one to two pages, will provide dynamic feedback on the five themes they outlined for what they hope is another three-year round of funding from BER. Their formal proposal is due in February 2020, and will undergo a formal BER review that May.

It helps that PNNL is the nexus for the Worldwide Hydrobiogeochemical Observation Network for Dynamic River Systems (WHONDRS), a part of the SFA project led by Stegen. It aims to integrate the physical, chemical, and biological processes of watersheds at a global scale by collecting, analyzing, and archiving samples from local watersheds using standardized protocols.

Measurements collected this summer from 100 sites will soon be paired with existing public data on river corridors to provide “tremendous context for all that complex geochemistry,” said Stegen. “We are looking at the systems holistically.”

“It also helps to see what thread of themes emerged from workshop presentations and interactions,” he said. “That includes the potential for machine learning and the need for interoperable distributed data.”

“Underlying any theme is the need for one another,” said Chen. Now and in the future, watershed science requires explicit interdisciplinary collaboration and data-sharing.