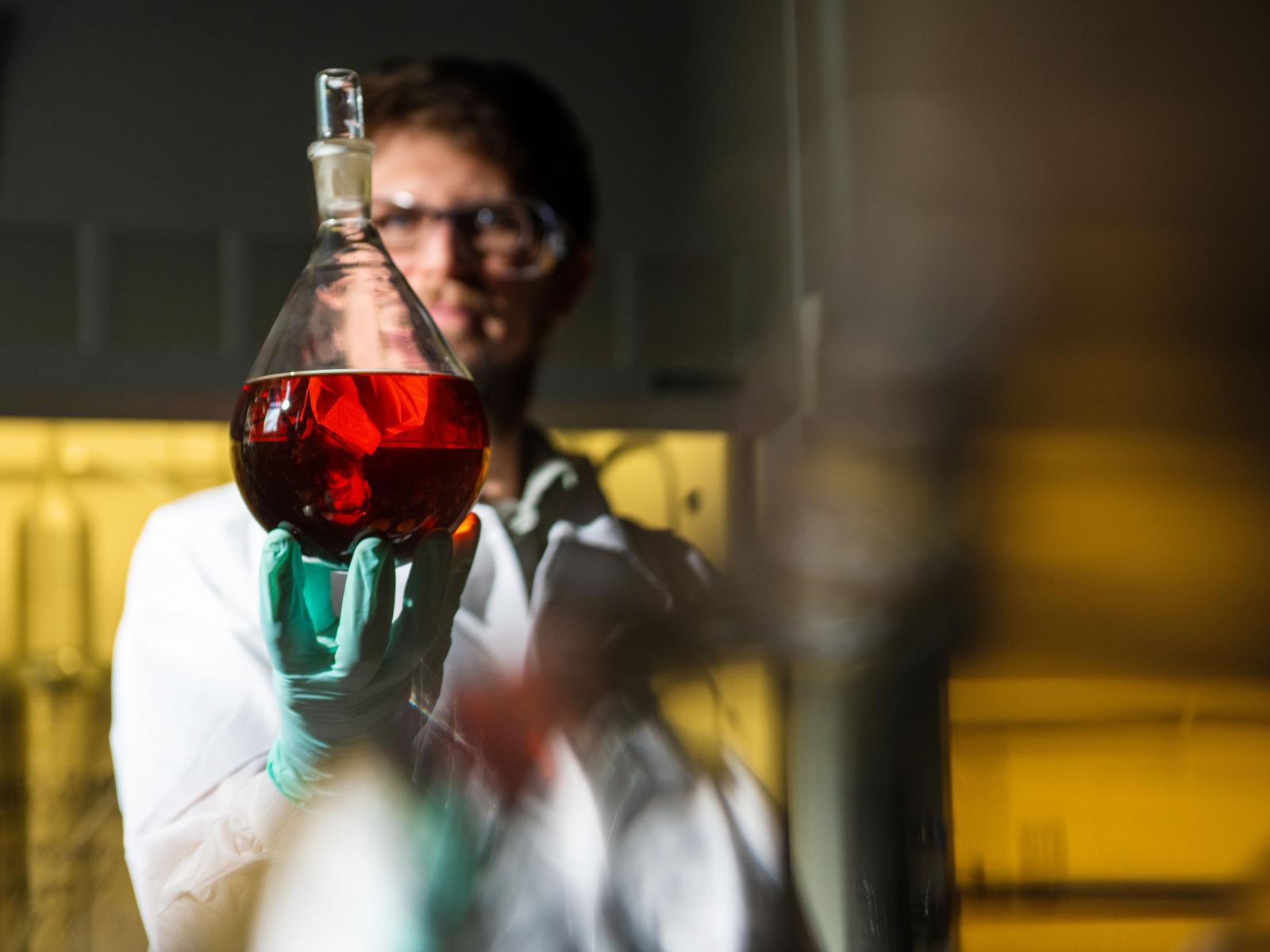 PNNL researcher Justin Billing and his colleagues are advancing technologies and approaches to convert different kinds of materials, including food waste, into biofuels.

When we eat, our bodies convert food into energy that fuels our lives. But what happens to the energy stored in the 80 billion pounds of food thrown away annually in America? As part of advancing sustainable energy solutions, scientists at the Department of Energy’s Pacific Northwest National Laboratory are converting food waste into clean, renewable fuel that could power our planes, trains and automobiles.

For decades, PNNL researchers have supported DOE’s goals to cost-effectively produce fuels derived from plants or animal wastes rather than petroleum. They have developed technologies to produce these biofuels from feedstocks including agricultural residues, forest byproducts, algae, and even sewer sludge and manure.

First, from an efficiency standpoint, food waste’s higher fat content and lower mineral content allows more gallons of biofuel to be produced per ton of food waste than with other feedstocks. Easily made into a pumpable slurry, food waste simplifies production and minimizes the cost of pre-processing that other feedstocks need.

Second, it may be possible to obtain food waste less expensively than other feedstocks with higher cultivation and harvesting expenses. It is already being generated in abundance, and people are willing to pay for its disposal. Using food waste rather than growing crops such as corn or soybeans to produce biofuel also prevents arable land from being devoted to fuel rather than food.

Third, turning this waste into fuel would keep it from going to landfills, which is important given recent bans specific to food wastes. As waste decomposes, it generates methane—a potent greenhouse gas released into the environment if not captured.

PNNL scientists pursuing this win-win-win begin by blending the waste, often with the help of customized equipment known as the Muffin Monster that grinds up everything from bones and gristle to seeds, wrappers and packaging. The resulting mush is warmed so it can be continuously pumped into a reactor and converted into fuel.

The researchers are testing different types of food waste to see if they can achieve consistent outcomes. During experiments, they address numerous chemical and process engineering challenges as they arise. They fine-tune the heat exchange design, resolve pumping issues and develop continuous separation techniques.

Researchers also seek to expand the base of biomass resources to gain efficiencies needed for large-scale adoption. Working with resource assessment teams, they test different feedstock blends with an eye toward accurately representing different sources of waste that could come together in local hubs.

For example, they are assessing the resources available within a 50-mile radius of Detroit, Mich., to determine the mixture of food waste, sewage sludge, and fats, oils and greases that could be consolidated and used to produce biofuel. Including food waste would allow biofuel production plants to be up to 10 times larger in urban areas—significant progress toward DOE’s cost and emission-reduction targets for biofuels.

In addition to engineering challenges, PNNL is addressing practical considerations. Economists are modeling various combinations of feedstocks and production factors to determine how mass-produced biofuels might be cost-competitive with conventional petroleum-based fuels and compatible with today’s infrastructure.

Looking forward, researchers are working with a waste disposal company that already gathers and separates food and other organic wastes from homes and businesses in some cities, creating daily batches of slurry. Scientists will study the composition of this waste and use it in experiments to produce biofuel.

So, as you scrape tonight’s dinner plate, rest a bit easier knowing your kitchen scraps might one day help reduce America’s dependence on fossil fuels. And be sure to think of the innovative PNNL researchers who provide that food for thought.