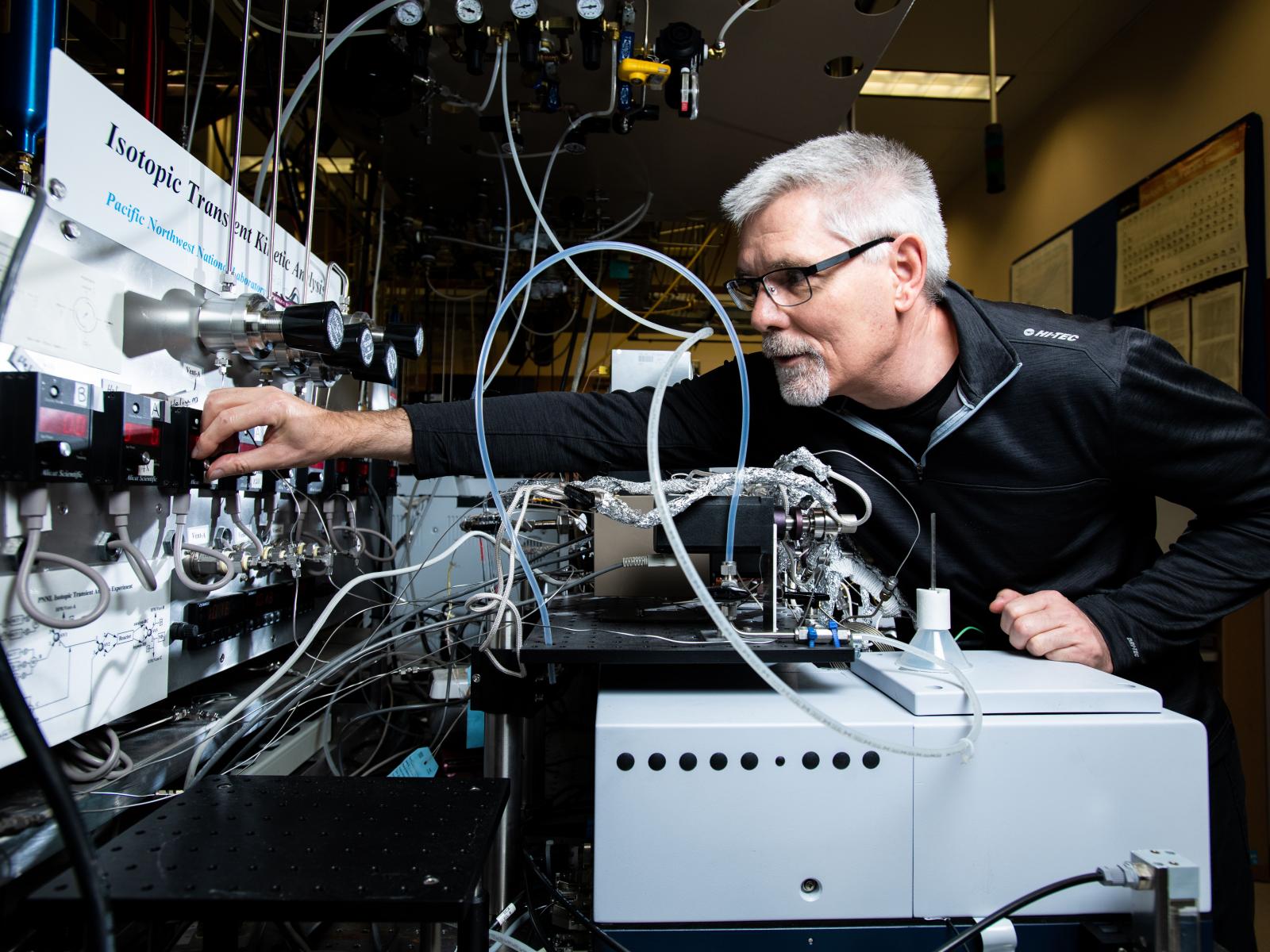 PNNL chemist Janos Szanyi and his colleagues at PNNL are developing catalysts that may make it possible for plastic waste to be converted into useful commodity chemicals rather than sending it to landfills.

Knowing that recycling is good for the planet, many of us gather up our glass, aluminum and plastic instead of putting them in the trash.

But chances are, most of us don’t think about how to get the most value from those materials or the technical challenges associated with doing so.

At the Department of Energy’s Pacific Northwest National Laboratory, scientists discovered a promising approach to make it easier to turn petroleum-based plastic waste into chemicals that can be used to produce new materials and fuels.

Their method, which could make it possible to “upcycle” plastics into more valuable products, focuses on increasing the efficiency of the desired chemical conversion.

The scientists are developing novel catalysts that speed up the chemical reactions while using a smaller amount of a precious metal than other catalysts.  As an added benefit, their method also generates less greenhouse gas as a byproduct.

In their experiments, researchers at PNNL determined how to efficiently break chemical bonds within plastics and facilitate a reaction that allows hydrogen to be added, resulting in a hydrocarbon that can be used as a fuel.

While the idea of exploiting this reaction is not new, the high-temperatures and expensive catalysts needed to produce fuels this way have made it cost-prohibitive for practical use.

PNNL scientists began by reducing the amount of the precious metal ruthenium in the catalyst they were studying.

Examining the process at the molecular level, they saw a change in the catalyst’s structure from orderly three-dimensional particles to particles that were less organized. And with that disorder, the catalyst is better at facilitating the desired reaction.

Their observations, inspired by PNNL’s previous work on single-atom catalysts, helped the research team understand the potential for designing and developing more effective, efficient catalysts that literally allow them to do more with less.

More specifically, results show that by lowering the amount of ruthenium, researchers could enable chemical conversions of a specific type of plastic called polypropylene that were seven times more efficient than what was reported in scientific literature.

Combined, polypropylene and another type of plastic, polyethylene, make up more than 50 percent of plastics produced—and this approach could work for upcycling of both.

As researchers at PNNL build a fundamental understanding of catalysts and how their structure determines their behavior, they are not only helping make the process more efficient, but they are also making it cleaner.

The reaction that occurs when hydrogen is added to plastics often generates large amounts of methane, which is a greenhouse gas.

By designing catalysts that break chemical bonds at certain positions, scientists could change the reaction enough to significantly reduce the methane produced as byproduct of upcycling plastics.

Looking ahead, researchers seek to advance industrial upcycling by learning more about how their system would be impacted by real-world conditions, including the different chemical compositions of materials found in mixed plastic recycling streams.

According to the Environmental Protection Agency, less than 10 percent of the 36 million tons of plastics generated in the United States in 2018 (the most recent year reported) were recycled while 27 million tons were put into landfills.

And, while I’ve heard the saying that “pollution is nothing but the resources we are not harvesting,” there are technical and economic challenges that make it difficult to harvest those resources from discarded plastic.

So, let’s do our part and raise our reusable water bottles in a toast to the researchers at PNNL who are helping to realize the promise of turning plastics into valuable fuels and chemicals.