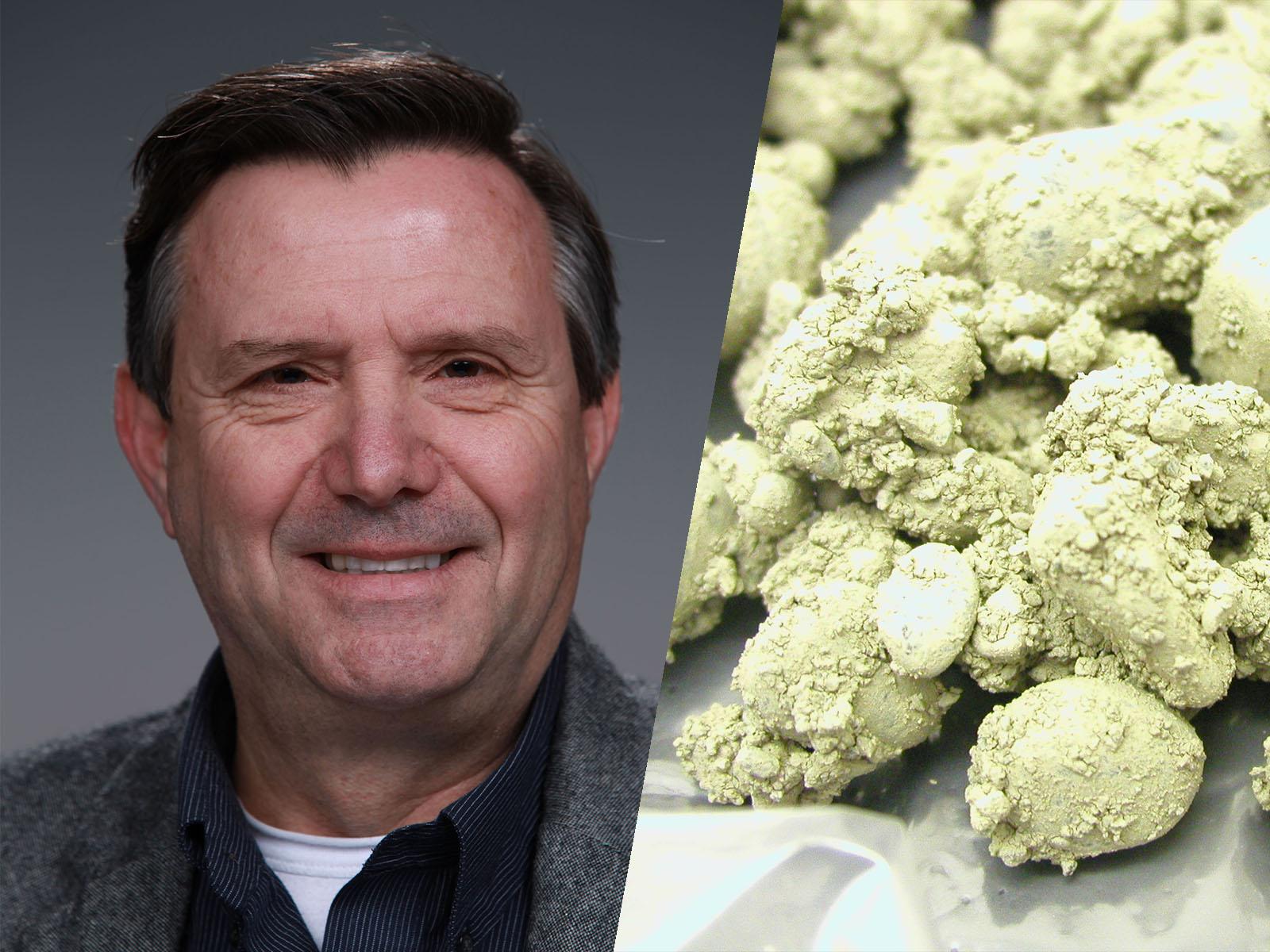 Nik Qafoku received the Soil Science Society of America’s 2019 Jackson Award for contributions to soil chemistry and mineralogy. Pictured here is a close-up of soil from a field site that was packed into a column and used to conduct meso-scale transport studies.

For his contributions in the areas of soil chemistry and mineralogy, PNNL researcher Nik Qafoku will be honored with the Jackson Award at the Soil Science Society of America’s annual meeting this November in San Antonio, Texas.

Qafoku’s work ranges from research into agricultural fertilizer efficiency in his native Albania to the fate and transport of contaminants and radioactive materials through soils and sediments near his adopted home of Richland, Wash. Among other things, he has studied the effects of leaking carbon dioxide gas from deep subsurface storage, the role of minerals in controlling the fate of contaminants, and aquifer contamination.

The award, one of the top honors in soil science, is supported by gifts from Marion and Chrystie M. Jackson. The honor recognizes a mid-career soil scientist who has made outstanding contributions in the areas of soil chemistry and mineralogy.

Qafoku is the chief scientist and lead of the Interfacial Geochemistry team in the Subsurface Science and Technology Group at PNNL. He also has served as an adjunct professor at Washington State University, an affiliate graduate faculty member at Oregon State University, and a professor at the Agricultural University of Tirana in Albania. He supports and mentors graduate students and junior scientists in his lab at PNNL, which was also a key criterion of his selection for the award.

He has published in leading environmental and soils journals, such as Environment Science and Technology, Geochimica et Cosmochimica Acta, Advances in Agronomy, Soil Science Society of America Journal, Journal of Environmental Quality, Vadose Zone Journal, Frontiers in Environmental Science: Soil Processes, CATENA, and Geoderma, as well as in interdisciplinary and highly ranked journals such as Science, Nature Communications, Chemistry of Materials, Earth-Science Reviews, and American Journal of Science. His papers have been published in more than 30 different peer-reviewed journals, demonstrating the depth and breadth of his research. He has received several outstanding performance awards, exceptional contribution awards, best paper of the year awards, and the R&D 100 award.

“Qafoku is known as one of the best soil column experimentalists in the world, with world-class facilities to back him up at PNNL,” said one of his nominators, Michael Hochella Jr., a university distinguished professor at Virginia Tech and former president of the Geochemical Society and the Mineralogical Society of America.

Hochella, who also is a laboratory fellow and holds a joint appointment at PNNL, notes that Qafoku is exceptionally knowledgeable in soil science, geochemistry, mineralogy, groundwater flow, contaminant mobility, soil nutritional states, and the nanoscience of soils.

“Regarding soil nanoscience, his knowledge is rare and insightful, perhaps even revolutionary in his field,” said Hochella. “Few soil scientists, anywhere in the world, are as well versed in nanoscience as Dr. Qafoku.”

Qafoku is a member of the American Chemical Society, American Geophysical Union, the Clay Minerals Society, and American Association for the Advancement of Science. He has served as a reviewer for more than 55 journals and as an editorial board member of soil journals. He has also served on Department of Agriculture review panels and has reviewed proposals for the Department of Energy’s Biological and Environmental Research and Basic Energy Sciences programs and the American Chemical Society Petroleum Fund.

Qafoku has 26 years of membership and dedicated service to Soil Science Society of America. The Jackson award comes with a $3,000 prize.

Bond-Lamberty Takes Role as Editor at the Journal of Geophysical Research: Biogeosciences