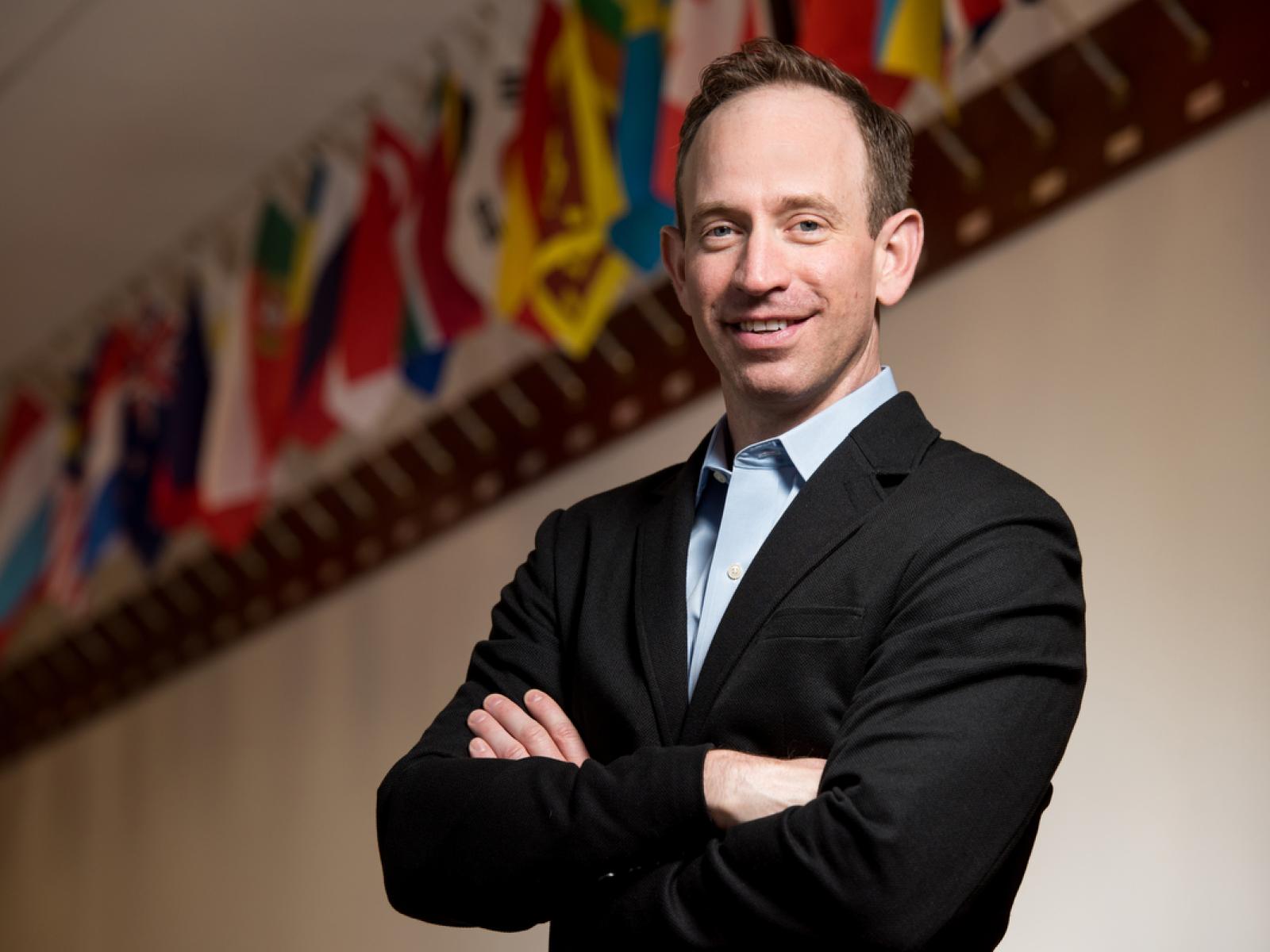 Chemist Douglas Mans was a “seeker,” sent forth by his employers to travel the globe in search of new technologies that might be useful in the pharmaceutical industry.

Included in his journeys to the likes of Microsoft, Palantir, IBM, Corning Glass and MIT was a stop at EMSL, the Environmental Molecular Sciences Laboratory, a Department of Energy user facility. That visit nearly six years ago made an impression.

“Simply put, I was blown away with the breadth and depth of science at EMSL,” he said.

This month Mans became director of EMSL, leaving behind a 13-year career in the pharmaceutical industry where he established a reputation for creating partnerships and adopting new approaches to address big science questions.

He and EMSL are a good match, with broad interests, a footprint of innovation, and boundless curiosity to accelerate scientific discovery of biological and environmental processes across many scales.

In one EMSL laboratory, a soil scientist obtains the best view ever of the molecular players in a small heap of soil from the Midwest. Down the hall, a chemist does research on tundra from the Arctic, measuring the effects of a changing climate and charting our planet’s health. At the far end of the facility, a biologist disentangles the actions of proteins implicated in the production of biofuels while another explores microgravity’s influence on the structure of plants.

It’s the perfect place for a man who considered medical school, almost majored in mathematics, loved physics and biology, then trained as a synthetic chemist.

His road to EMSL primed him for the opportunity to be its director. During his time at GlaxoSmithKline (GSK), he was deployed to seek out science and technologies that might be useful to GSK. The scope was huge. Augmented reality. Machine learning. 3-D printing. Nothing was out of bounds. For two years he searched for outstanding and relevant science, returning to GSK to report exciting developments and strategize. He roamed and explored, looking for new approaches and new technologies that could advance drug development.

Catalysis plays a huge role in drug creation and development, and a few years ago Mans learned of the Center for Molecular Electrocatalysis at PNNL. He contacted its director, Morris Bullock, who introduced him to colleague Bob Weber, who invited Mans to visit. Their discussions turned to PNNL’s flow battery research and its potential application in the production of chemical compounds. He and Weber embarked on a project to use the flow battery as a basis to create an electrochemical reactor that worked continuously. The work marked some of the first progress in industry toward the continuous catalytic processing of pharmaceuticals, an approach that had been mostly dismissed as too difficult to achieve and too risky to implement.

It’s a good illustration of what Mans is known for–taking threads of research from very different settings and weaving them together to create something new. He sees that potential at EMSL, with its web of expertise, instruments, and connections around the world. EMSL is the place, he says, where expertise and high-end instrumentation are aligned with tackling global issues that a community of users helps to define and analyze.

“At EMSL there’s an opportunity to put disparate pieces and experiences together to solve problems that, if addressed alone, would not be solved for 10 or 20 years, or perhaps not solved at all. That’s why I’m so drawn here,” he said.

A desire to take on big challenges is part of Mans’ DNA. At St. Louis University he meandered among several possible majors, all bounded by an interest in science and a desire to improve humanity’s lot. An outstanding teacher in organic chemistry tipped the scales.

“I found it thrilling to have a molecule up on the screen and then be asked how to make it,” he said. “It was fascinating. I learned just how important that was, and how challenging it is to do so as inexpensively and efficiently as possible. That really resonated with me and that’s how I ended up on the process development side of pharmaceuticals.”

At the University of Michigan he earned his Ph.D. in organic chemistry investigating the utility of 2-azaallyl anion cycloaddition chemistry in natural products synthesis before heading to the University of Texas, where he served as an NIH-funded post-doc exploring the novel syntheses of anti-tumor compounds known as angucyclines and angucyclinones. He has also taken executive education courses at the Wharton School focusing on innovation and competitive strategy.

At Janssen Pharmaceuticals, he helped bring about last year’s partnership with U.K.-based Touchlight Genetics to evaluate the company’s novel synthetic DNA technology in the development of new therapies for cancer and infectious disease.

Before that, at GSK, he initiated a collaboration with the laboratory of Chad Mirkin at Northwestern University, incorporating new approaches to nanolithography as a way to create novel materials in a controlled fashion.

One similarity Mans sees between EMSL and his time with Janssen and GlaxoSmithKline is the importance of creating partnerships. At Janssen, he served most recently as innovation director of pharmaceutical development and manufacturing supply, establishing collaborations with academic institutions, start-up companies, government entities, and companies like Dyadic International and TouchLight Genetics. He has also helped forge key working relationships with IBM, Corning and General Electric.

Recognizing the value of cross-functional collaboration in tackling the complexities and challenges in developing lifesaving medicines in pharma has prepared him to lead EMSL staff and the user community in addressing tomorrow’s challenges in environmental and biological science, he said.