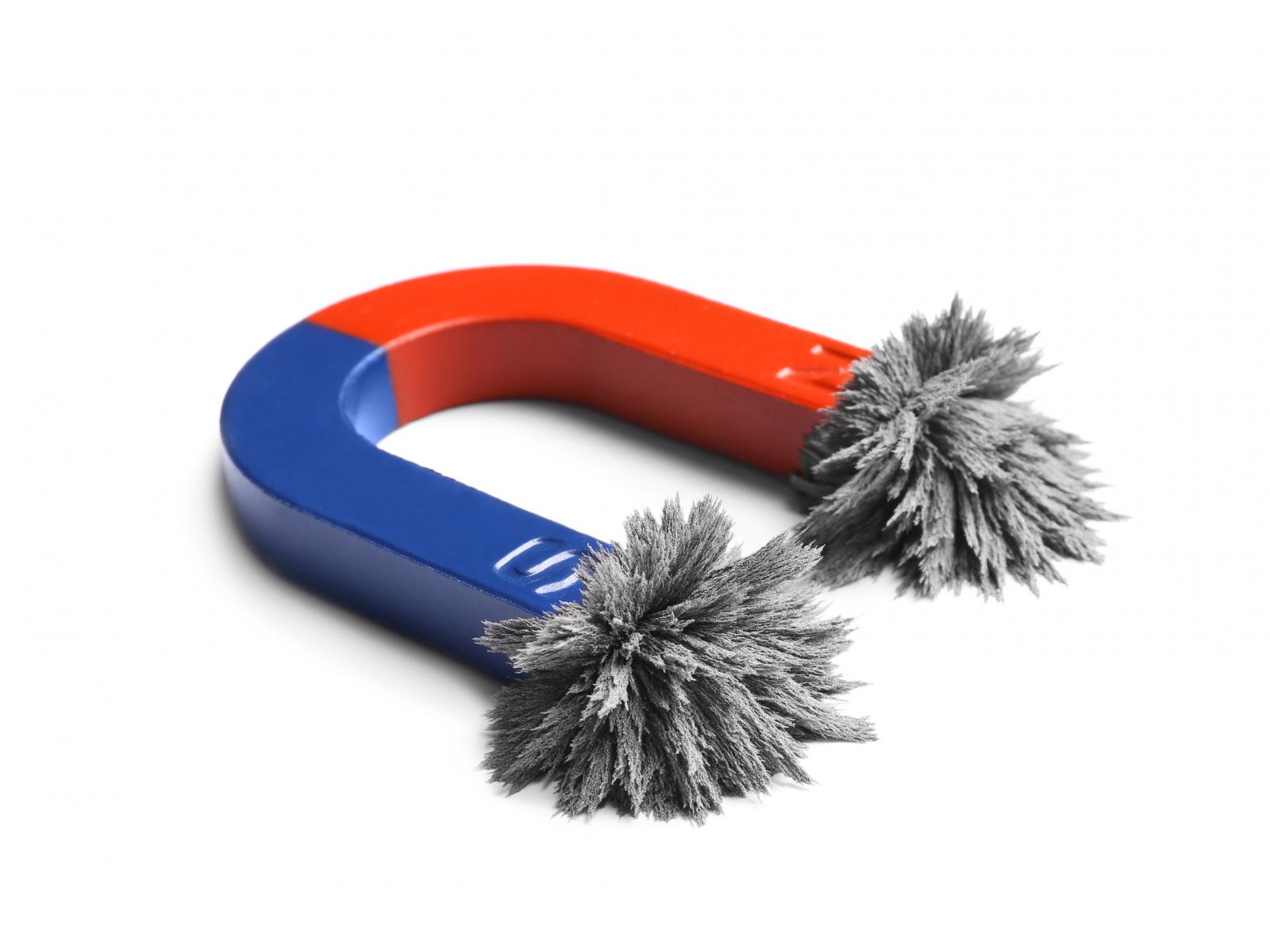 Lithium-containing nanoparticles can be collected easily by their attraction to a magnetic collector, just like the iron filings shown here are attracted to a simple magnet.

RICHLAND, Wash.—A clever idea to use magnetic nanoparticles to capture valuable materials from brines has blossomed into industrial-scale pilot projects that could help make the U.S. a producer of critical minerals used in electronics and energy production. Today, most of these minerals are obtained from international sources, many of which are high-conflict regions.

The patent-pending technology, developed at the U.S. Department of Energy’s Pacific Northwest National Laboratory, has been licensed exclusively by Moselle Technologies, a start-up business that is piloting the technology in several U.S. and international locations.

Together, PNNL and Moselle have successfully competed for technology development funding, including two Cooperative Research and Development Awards and a 2021 DOE Advanced Manufacturing Office award, to advance the process for capturing strategically important elements from water sources.

The core nanoparticle consists of a form of iron oxide better known as magnetite. This core particle is used to anchor the adsorbent shell that selectively binds the compounds of interest. That’s the key to the patented technology. The nanoparticles can be introduced into brines from geothermal plants, produced water, mineral mining effluent, and seawater, where they latch onto free floating target compounds. When exposed to a magnet, the nanoparticle’s iron core behaves like iron filings do in the classic science experiment—they migrate toward the magnet, along with the critical material to which they are bound, and can be filtered from the brine. The technology is being adapted for the capture of lithium, a versatile lightweight metal perhaps best known for its roles in battery technology.

“Current approaches for lithium extraction from water, for example, require a processing step that pumps large volumes of water, thousands of gallons a minute, through an ion exchange filtration system, making it both energy intensive and expensive,” said Pete McGrail, PNNL laboratory fellow and recognized expert on rare earth metal recovery technology. “Our nanotechnology process allows us to miniaturize everything and removes the need for massive ion exchange separators required in other processes. It’s quite simple. Within a few minutes, virtually all of the lithium has been pulled from the solution by molecular collisions with our sorbent and can then be removed with a magnet where it's easily collected and purified.”

“People have lost a lot of money trying to harvest lithium,” said Moselle Technologies CEO Jerry Mills. “We need another way to do it. We had been searching for the lowest-cost technology to produce rare earth elements and strategically important elements like lithium. For many of these, the U.S. has little to no production. We are going to do our best to solve that problem. We think this technology will get us over the cost hurdle.”

Lithium, nickel, cobalt and rare earth elements are in high demand by makers of semiconductors and wind turbines, as well as batteries used in electric vehicles and in other green energy technologies. But currently, the global supply chain for these elements relies heavily on dated extraction processes that are energy intensive, consume a lot of water, and create toxic waste. Imports account for 100 percent of U.S. supply for 14 of 35 critical materials and more than half of 17 others, according to the Department of Energy, which has made domestic supply a top priority. This PNNL technology, in laboratory development for several years, is now ready for field testing.

One of the planned pilot projects, funded cooperatively by the DOE Office of Fossil Energy with industry cost share, combines the resources of the oil and gas industry with PNNL’s technology.

“Oil and gas brines are an untapped domestic resource of lithium,” said McGrail.

Oil and gas extraction across the U.S. and Canada pumps subsurface water to the surface as part of the extraction process. Lithium is present in much of this water, over a wide range of locations. PNNL scientists estimate that if just 25 percent of the lithium in water produced through oil and gas extraction were collected, it would equal current annual worldwide production. To explore this possibility, PNNL, Moselle Technologies, Canada Natural Resources Limited and Conoco Phillips Corporation will conduct a prolonged test at PNNL’s Richland, Wash., campus. There, the team will stress-test the technology by subjecting it to extended cycle testing with the magnetic separator system, a needed step for full-scale industrial production.

“By using the magnetic nanoparticles to attach to the lithium particles in solution, we expect the resulting concentrate to be in a purer form, thereby reducing the cost of further processing,” said Mills. “And this will take out more than half the cost.”

A second project, which was announced in January after a competitive application process, will be funded through a DOE Advanced Manufacturing Office FY20 award. In this project, the companies Enerplus Corporation, Prairie Lithium Corporation, Enertopia Corporation and Dajin Lithium Corporation will investigate the technology for potential application at lithium mines in Nevada and Canada. The work has been approved and will get underway in Spring 2021.

The clean, non-polluting technology could also be used for recovery of other critical materials. A third cooperative research project will explore that possibility.

“We have developed sorbent materials specific to many elements,” says McGrail. “In this project, we will work with the New-Zealand-based geothermal company Geo40, which has identified cesium present in its brines. In this project, the team will extend the work done to recover lithium to new sorbents that are highly selective for cesium. If successful, the group would like to build a pilot-scale plant in New Zealand.

The research and development of the magnetic nanoparticles was supported by the Department of Energy’s Geothermal Technologies Office.