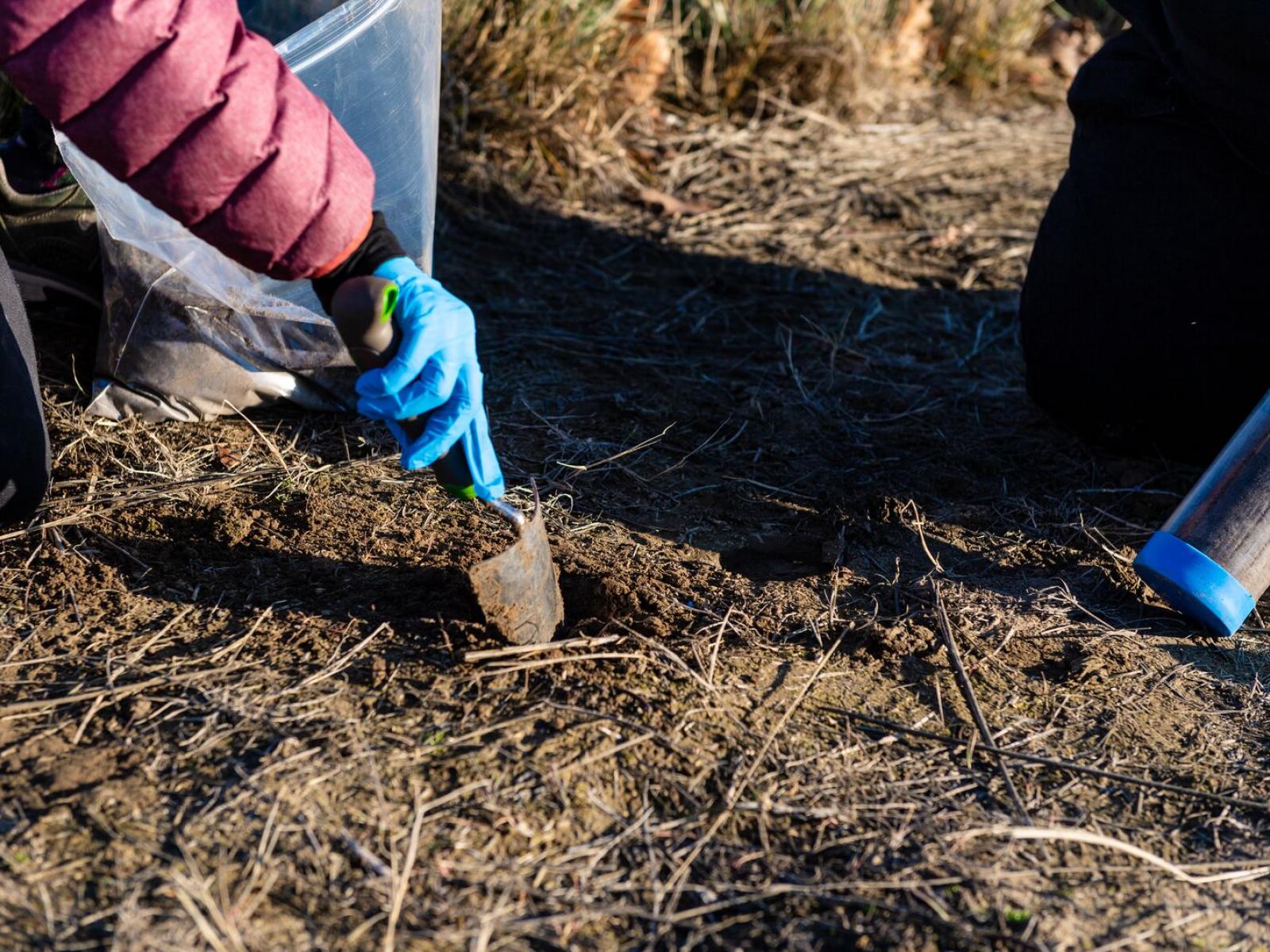 Soil and its microbes from Prosser, Wash., are heading for the International Space Station, part of an experiment to learn more about microbial behavior in microgravity.

RICHLAND, Wash.—A tiny piece of rural Washington state—and some of its “inhabitants”—are scheduled to blast off into space from Kennedy Space Center in Florida later today (Thursday, July 14).

The inhabitants are bacteria that live in the soil in Prosser, Wash. Scientists will study what the bacteria do in a microgravity environment to learn more about how soil microbial communities function in space. That’s information scientists need to grow food either in space or on another celestial body.

The experiment, funded by NASA, is called DynaMoS, or Dynamics of Microbiomes in Space. The study is being conducted by researchers at the Department of Energy’s Pacific Northwest National Laboratory.

The soil microbial community headed for the International Space Station is composed of eight species of bacteria that PNNL scientists isolated from a scientific field site in Prosser that is run by Washington State University. The microbes will be among the payload of NASA’s SpaceX CRS-25 resupply mission.

PNNL scientists will study how the microbes behave in space compared to how they behave on Earth. Why do some species flourish under certain conditions and struggle under others? Who needs which partners to thrive, and who might be expendable? Will microbes work in space like they do on Earth, to help us grow food and cycle carbon and other nutrients?

“We still have a lot to learn about how microorganisms behave on Earth,” said Janet Jansson, a chief scientist and laboratory fellow at PNNL and the leader of DynaMoS. “There are even more questions to address if we are to grow food in space, for instance on the lunar surface or for a long-lasting mission to Mars. How do microbes behave in microgravity, for instance?”

Jansson, Ryan McClure and other PNNL scientists have spent several years studying how communities of microorganisms behave in the soil on Earth.

“Plants need beneficial soil microbes to help them grow. Microbes can provide nutrients and protect plants from drought, from pathogens, and from other kinds of stress,” said McClure. “Understanding how microbes interact as they do this is the first step for building communities of microbes that can support plant growth in places like the moon, Mars, or the space station.”

At home, even in space

The experiment draws upon some of the fanciest technology available to study something as common as soil. Just one cup of soil typically contains thousands of different microbial species—far too many to understand at once. From its studies in Prosser, the PNNL team has evolved a naturally interacting community of eight species that will be used for the space mission.

The bacteria will grow in their home environment, soil collected from Prosser. A few days before launch, the scientists will inoculate the soil with the eight bacteria: Dyadobacter, Ensifer, Neorhizobium, Rhodococcus, Sinorhizobium, Sphingopyxis, Streptomyces, and Variovorax.

The soil will contain chitin, a common microbe chow found in soil worldwide. The ability to eat chitin, or eat byproducts given off by other species as they break down chitin, is key for the microbial community to survive.

“The native soil microbiome is very complex, with thousands of species and millions of interactions. So, we chose to start by focusing on eight species from a naturally evolved community to study,” said McClure, who calls the grouping a “reduced-complexity community.”

The experiment will include 104 test tubes containing the soil and chosen microbes. Half will be sent to the space station, and half will grow under similar conditions—except for gravity and atmosphere—in a laboratory at Kennedy Space Center in Florida.

Each tube will contain 20 grams of soil packed with chitin and hundreds of millions of each of the eight bacteria. The tubes will be sampled at four different times over 12 weeks. Then the space samples will be returned to Kennedy Space Center, and all the samples and microbes will be driven via refrigerated truck from Kennedy to PNNL for intensive analysis.

Back on terra firma

Scientists will measure the number of each species as well as their proteins, other molecular messengers known as transcripts, and byproducts called metabolites. Measurements will tell who is most abundant, who is rare, and more importantly what each is doing and how they’re interacting. The measurements will be done at EMSL, the Environmental Molecular Sciences Laboratory, a DOE Office of Science user facility at PNNL.

“We need to understand who plays well with whom, who never wants to be with whom, and so on. It takes a village of microbes to create a thriving community and to enhance crop production. That’s true for agricultural production anywhere, whether in space or on Earth,” said Jansson, who is on a panel of biologists taking part in the Decadal Survey on Biological and Physical Sciences Research in Space 2023−2032.

Much of the groundwork for the soil mission has been established through a study of the soil microbiome by PNNL scientists and which has been funded by DOE.

Other experiments on board will look at wound healing, immune cells, biosensors, concrete and Earth’s dust.