A Keen Eye Behind the Microscope 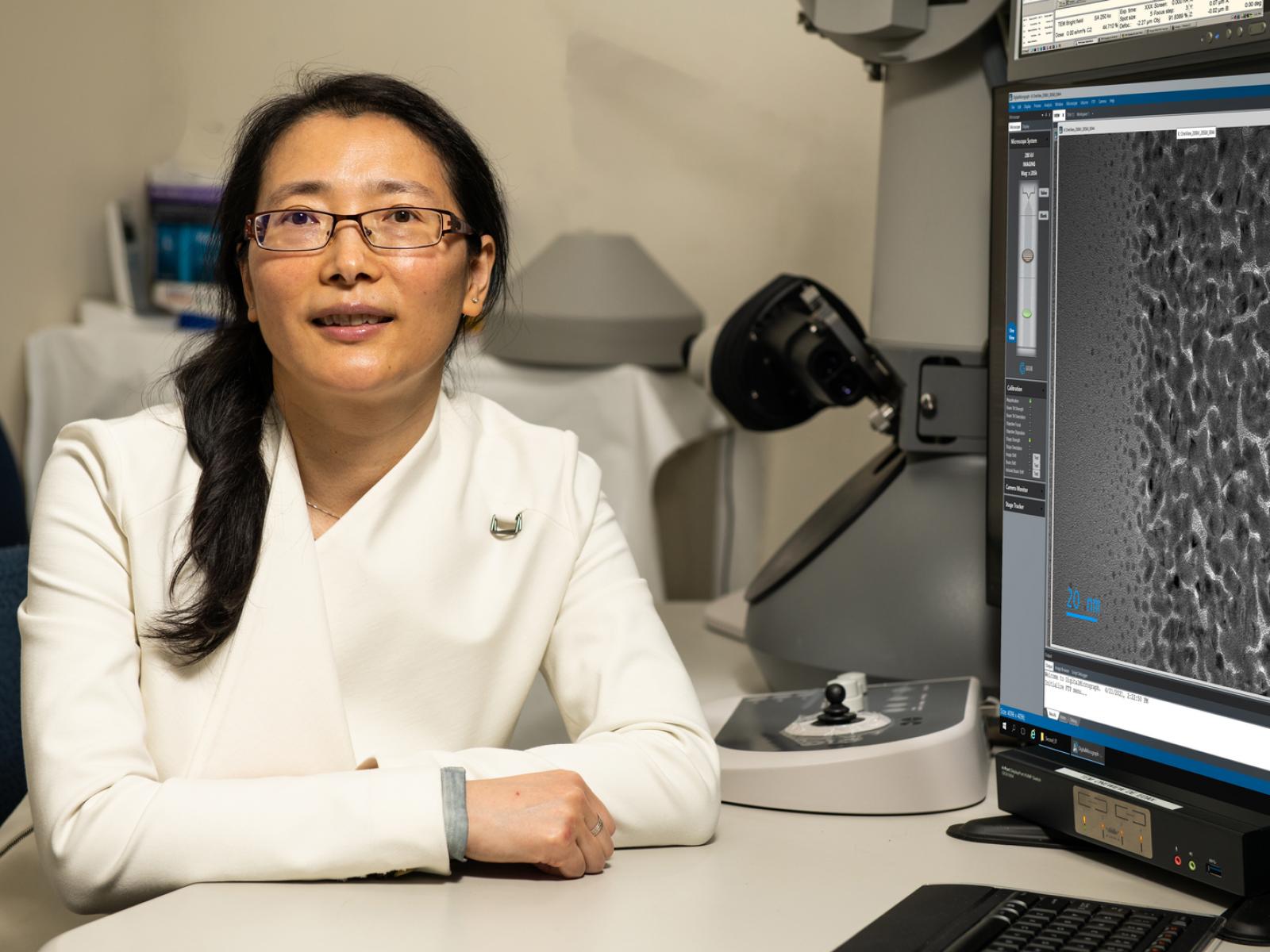 PNNL materials scientist Dongsheng Li has made breakthroughs in the study of oriented attachment at the nanoscale. She will be bringing that research expertise to the Energy Sciences Center, set to open in fall 2021.

The experiment was not going well, as experiments often do.

One researcher’s stomach tied in knots.

Li thought of options and alternate approaches to troubleshoot the experiment, unraveling at Pacific Northwest National Laboratory (PNNL). She thought critically, and headed to another building to try different preparation steps.

Was the experiment back on track lickety-split? No. But it found its course over time. Li made sure of it. She displayed the skill, experience, perseverance, and mental agility that have characterized her work since arriving in 2013 at PNNL as a staff scientist.

By May 2015, she received an Early Career Research Program Award from the U.S. Department of Energy in the highly competitive program. Li devoted the five-year research grant to using high-powered microscopes to examine the formation of branched nanocrystals less than one-thousandth the width of a human hair. Using in situ transmission electron microscopy and atomic force microscopy, her group made many discoveries on particle-mediated growth—especially oriented attachment processes—and solid-state phase transformation.

Li’s research has been published in Science regarding two major breakthroughs stemming from the Early Career Award research. In March 2020, she was appointed as a team leader in PNNL’s Physical Sciences Division.

Microscopy tools to the rescue

“She has been able to very effectively use microscopy tools to get atomistic information from material systems that provide insights into the mechanisms that lead to a material’s formation,” said Jim De Yoreo, PNNL chief scientist for materials science, who helped recruit Li to the lab. “Her key strength as a researcher is really knowing her methodology and how to utilize it to answer key questions about the synthesis of a material.”

Growing up in Jilin Province in northeast China, Li’s gravitation toward science came early. There was little time for sports or music, though today she’s a hiker and swimmer, and occasionally plays piano.

“I was good at math and chemistry and physics when I was in high school,” Li said. “Because of that, I chose to go for this science direction instead of, I don't know, politics or music or a totally different direction. Science just kind of made sense to me naturally.”

Li enrolled at Jilin University, a state-supported research university whose chemistry program is among the world’s best, according to U.S. News & World Report’s “Best Global Universities.” Li earned a bachelor’s degree in applied chemistry and a master’s in inorganic chemistry, supported by “Scholarships for Excellent Students” along the way.

Destined for research. But where?

She knew early on in her collegiate career that she’d pursue a PhD. And then? “Something in the scientific field,” she said. “Maybe as a professor, a faculty position. And I knew I wanted to come to the United States, to get my PhD here.”

She enrolled at Pennsylvania State University. As she had moved toward chemistry as an undergrad, the same process of following what made sense naturally led her to materials science at Penn State. “Chemistry and materials science are all connected,” she said.

While working as a postdoc fellow at the University of California, Riverside, Li’s postdoc advisor, Professor David Kasailus, introduced her to De Yoreo at a conference. Li said she wanted to work on De Yoreo’s research team at Lawrence Berkeley National Laboratory. When De Yoreo went to work at PNNL, Li followed to continue materials research work.

“She played an important role at Lawrence Berkeley as well as our early research at PNNL, providing expertise in nanoparticle synthesis and electron microscopy for understanding the science of materials synthesis,” De Yoreo said. “Overall, she takes collaboration seriously. She values working together through timely discussions about the research and following through on the details.”

Li’s materials science research at LBNL and PNNL has been published in Science regarding two major breakthroughs: Understanding the process of oriented attachment in an iron oxyhydroxide system and describing why and how five-fold twin nanoparticles form.

In the latter breakthrough, Li and her colleagues used a combination of high-resolution transmission electron microscopy combined with molecular dynamics simulation techniques to probe why the structures form as they do. Nanomaterials with this structure have already been shown to have useful properties, such as light responsiveness. They are deployed in medical research for precisely tagging cancerous tumors for imaging and tracking, and in electronics, where they are valued for their mechanical strength.

A new home for powerful equipment

Li said the ESC will eventually be the home of a new transmission electron microscope (TEM), a device that uses a particle beam of electrons to visualize specimens and generate a highly magnified image. TEMs can magnify objects up to 2 million times.

“It really has some nice capabilities,” Li said, “especially its research laboratories and flexible-use open spaces.”

De Yoreo also saw how the ESC will help Li as well as other researchers working in basic energy sciences and electron microscopy.

“It's designed to have quiet space. That’s essential for high-quality electron microscopy work,” De Yoreo said. “And it will have the ancillary equipment a researcher needs, such as focused ion beams for preparing samples. The atomic force microscopy suite will be in there, which is complementary work that Dongsheng does. Right now, the equipment essential to her work is located in three separate buildings on the PNNL campus. Bringing all of those capabilities together into one high-quality space will advance her research.”

At the core of bricks, mortar, quiet suites, and advanced equipment, though, is the researcher. PNNL materials scientist Elias Nakouzi knows that, having observed Li in action during a perilous point in that experiment that was not going well.

“When I first joined PNNL as a postdoc, Dongsheng was the first person to show me, by her example, what it means to be a scientist at a national laboratory,” Nakouzi said. “The way she tried different approaches to troubleshoot the experiment caught my attention. We all have experiments that occasionally do not go too well. When that happens to me, I remember how Dongsheng successfully handled the situation."