A Nano-sized Slice of Pie 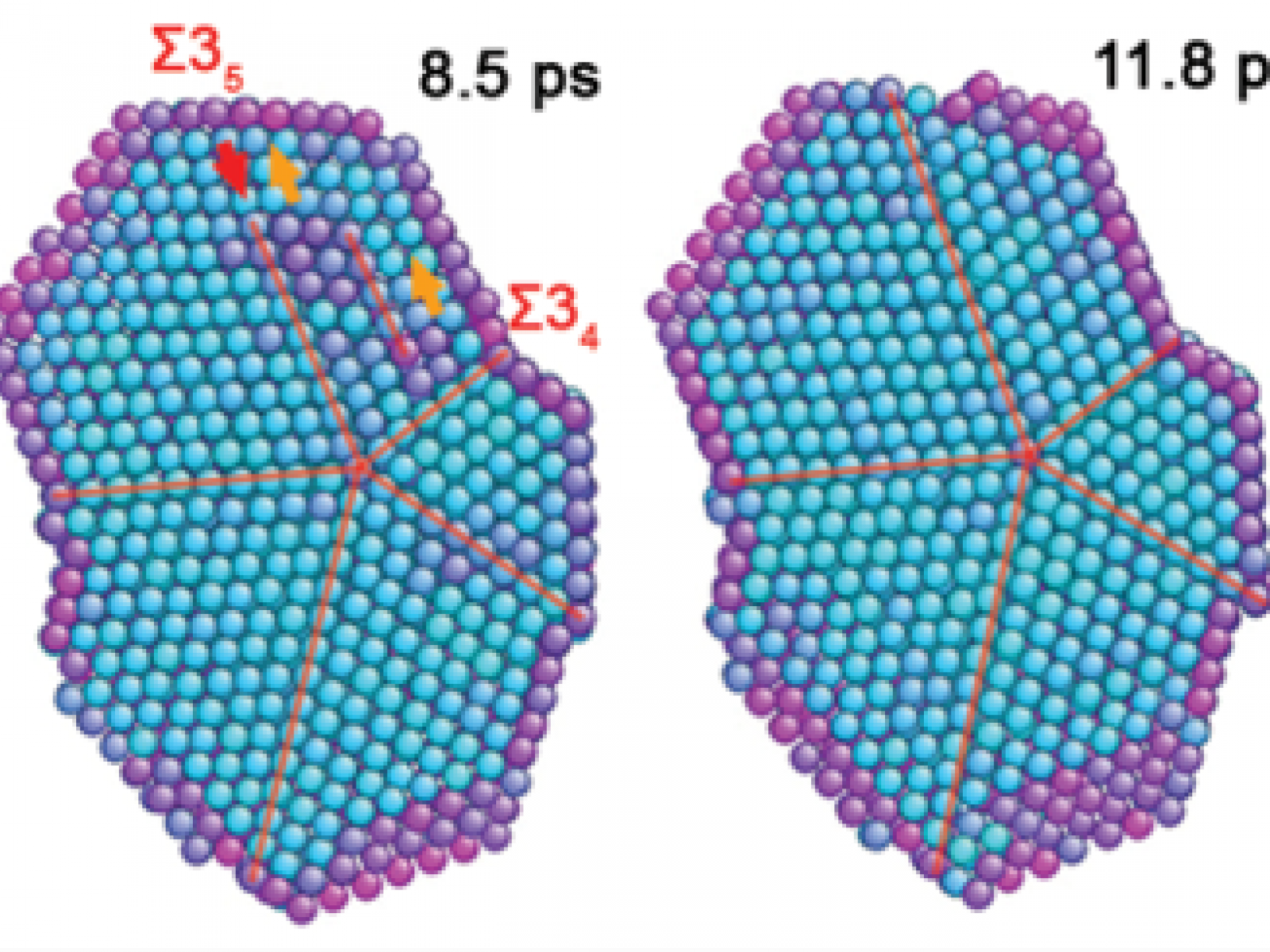 Electron microscopy reveals nano-crystals self-assembling into pentagonal polygons. Researchers at Pacific Northwest National Laboratory revealed the secret to why nanoparticles sometimes self-assemble into this five-sided shape, which has special properties and is useful in medical research, electronics and other applications.

Reprinted with permission from AAAS

Materials formed on vanishingly small scales are being used in medicine, electronics, manufacturing and a host of other applications. But scientists have only scratched the surface of understanding how to control building blocks on the nanoscale, where simple machines the size of a virus operate.

Now, a team of researchers led by Dongsheng Li, a materials scientist at PNNL, and collaborators at the University of Michigan and the Chinese Academy of Sciences, have unlocked the secret to one of the most useful nanostructures: the five-fold twin. Their study describing why and how this shape forms is detailed in the journal Science and was presented at the Materials Research Society annual meeting on December 5, 2019.

A cross section of a five-fold twin structure looks for all the world like a pie sliced into five perfectly symmetrical pieces. Nanomaterials with this structure have already been shown to have useful properties and are deployed in medical research for precisely tagging cancerous tumors for imaging and tracking, and in electronics, where they are valued for their mechanical strength.

Ever since scientists learned how to manipulate molecules on the nanoscale, they’ve noted that materials tend to aggregate into certain geometric shapes: Wires, tubes, spheres, and cubes all form with little intervention. But why?

The research team used a combination of high-resolution transmission electron microscopy combined with molecular dynamics simulation techniques to probe why the structures form as they do. In most cases, nanostructures form too quickly to capture them using experimental imaging techniques. Here, the team deployed a clever strategy: they forced the molecules to move more slowly by encasing them in a molasses-like organic matrix, and they observed more than 200 formation events to capture all of the key steps of the process. They discovered two different mechanisms for forming five-fold twinned nanostructures, both of which are shaped by the accumulation and elimination of strain toward an ideal shape that eliminates all strain.

“The mechanism we worked out is a common pathway for crystal growth that occurs widely in diverse systems like metals, semiconductors, organics, and biomineral phases,” said Li. “Therefore, what we learned from our observation may generalize to a wide range of materials.”

Now that the researchers have captured the basic forces shaping the structure, they hope to be able to guide more kinds of materials into this very useful pie shape.

“We hope to enable the design of nanostructures with controlled size and morphology, and to tailor their properties,” Li said.