For Inventive Ibrahim, an Inventor’s Honor 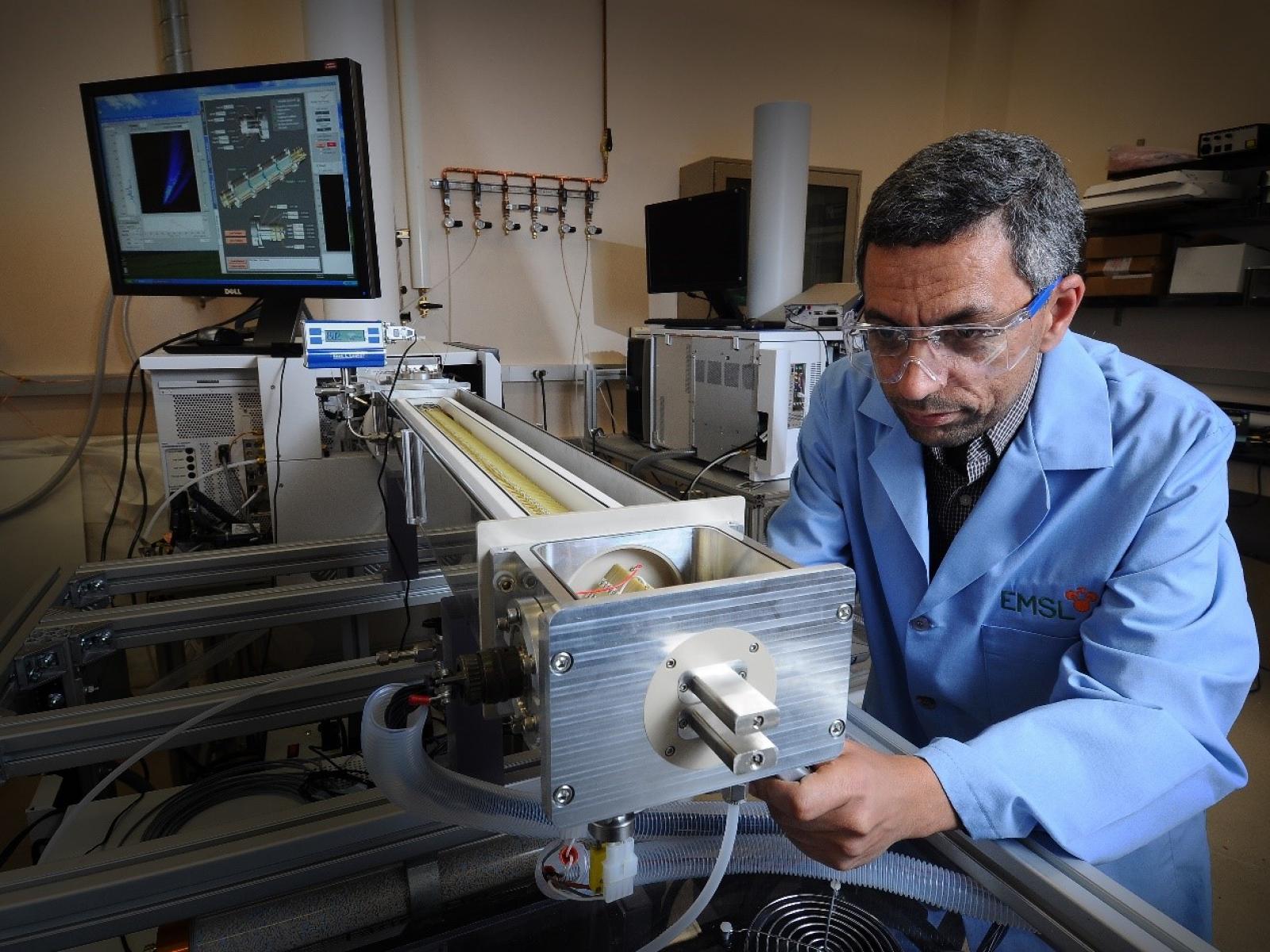 His patents involve novel MS and IMS technologies that, in the end, have enabled a deeper understanding of living systems.

Mass spectrometers ionize, and then analyze, chemical and biochemical compounds in essentially any sample, from a pinch of soil to a drop of blood. Coupled with separation technologies, such devices are powerful tools for identifying the molecules within a sample.

In PNNL’s biomedical space, Ibrahim’s work has made it easier to get more precise measurements of proteins, metabolites, and lipids.

In the 2000s, he helped improve a PNNL-developed ion funnel that was a breakthrough lab technology in the late 1990s. It helped mass spectrometers become faster and more sensitive analytical tools, and advanced the understanding of complex biomolecules.

Ibrahim was a key researcher in developing a new ultrasensitive IMS-Time of Flight (TOF) platform for biomolecule analysis. It won a 2013 R&D award.

With a research group using the same physics of ion mobility as in the ion funnel, Ibrahim was central to the development of the Structures for Lossless Ion Manipulation (SLIM) technology, which won an R&D 100 award in 2017.

In 2018, Ibrahim was a member of the SLIM team at PNNL that won an award for excellence in technology transfer from the Federal Laboratory Consortium.

The same improved MS technologies Ibrahim and others work on at PNNL have applications beyond health and medicine. For one, they can detect and measure very low levels of compounds of interest to environment and national security researchers.

The PNNL veteran, who started in 2005, is part of the Biological Sciences Directorate. He came to the lab after a postdoctoral fellowship at Virginia Commonwealth University, where he earned his Ph.D. in physical chemistry in 2003. Before that, the Egypt-born Ibrahim earned B.Sc. and M.Sc. degrees in chemistry at Cairo University.

Ibrahim’s latest honor is a reminder of the decades of advances in MS at PNNL—advances that have given the lab immense stature in the field. PNNL research in that area, of course, is significantly enabled by the presence on campus of EMSL, the Environmental Molecular Sciences Laboratory, a Department of Energy (DOE) Office of Science user facility.

Who better to quiz about the past and future of MS at PNNL than Battelle Fellow Richard D. “Dick” Smith? He arrived at the lab in 1976, not long after earning a Ph.D. in physical chemistry from the University of Utah.

Smith is chief scientist at the Biological Sciences Division at PNNL, and director of the lab’s proteomics research. He has worked closely with Ibrahim for 14 years, and was named PNNL Inventor of the Year in 2009. (Smith holds 66 patents.)

In the 1970s, “the combination of MS with gas chromatography (GC) really had a big impact,” he said, including for drug testing and environmental analyses. “It became, and still is, the go-to method for a lot of analysis.”

The year Smith arrived at the lab, two space probes in the Viking program went into orbit around Mars, releasing two lander modules equipped with GC-mass spectrometers to search for chemical evidence of life.

In the GC/MS sphere at PNNL, however, “very little was going on outside of radionuclide analysis,” he said.

To be fair, wherever you went in those days, GC/MC technologies were missing the ability to analyze nonvolatile compounds, which left out most everything of interest in biological samples. In gas chromatography, “the compounds had to be volatile,” said Smith. “That was the big impediment, and people knew it.”

Since then, however, the lab has been the key in a lot of developments that got around the volatility problem “with different combinations of chromatography and capillary electrophoresis with MS,” he said, and “also allowed us to deal with increasingly small samples.”

Lab-driven MS developments at PNNL went on to change the face of the field. Those included the ion funnel in the late 1990s, which Ibrahim later helped enhance. From the beginning, though, the Smith-inspired ion funnel improved MS sensitivity dramatically.

More recent advances at PNNL have allowed researchers “to identify peptides and proteins at much lower levels,” said Smith, “and made it much easier for us to do high-throughput measurements.”

That inventive momentum continues at the lab all the way through today. For one, Smith added, “there’s a lot of interest in making measurements at the level of a single biological cell, and doing so in great detail.”

PNNL’s game-changing developments began in the late 1970’s, when Smith built PNNL’s first MS instrument not connected to radionuclide analysis. (He had no group of his own then, and turned to the lab machine shop for help.)

From there emerged a theme that has marked PNNL contributions in MS since then: developments in combining separation technologies with mass spectrometry—developments that Smith called “really fundamental.”

In the late 1970s, one of the first things he and others did at PNNL was develop a liquid chromatography (LC)-MS interface. (In LC, the separation of molecules takes place in a liquid.)

Smith said he learned that LC separations left a lot to be desired.

That first effort “just wasn’t very good,” admitted Smith, though it generated some published results in 1980 and 1981. “We still couldn’t analyze much of real interest, including most biological compounds.”

Still, the modest payback of the LC work only stimulated more team interest in improving the separations introduced into MS analysis pathways.

In the early 1980s, interest in MS grew at PNNL, along with the number of its practitioners at the lab. That mirrored growing interest among the larger scientific community.

Then came another interface experiment: linking supercritical fluid chromatography with MS, which seemed to be a promising avenue for analyzing biological samples, said Smith. Under certain pressure and temperature conditions, supercritical fluids have properties that combine the properties of liquid and gas phases.

Supercritical fluid chromatography also had the big advantage of yielding superior resolution—a good thing, given the complexity of biological samples.

In the end, said Smith, the approach “opened up new kinds of analysis,” though only for a limited number of biological compounds.

In 1987, Smith designed another interface, this time between capillary electrophoresis and MS. It was another way to get not only higher resolution, but also efficient ionization of essentially any biological compound.

The interface was enabled by a new development outside PNNL, electrospray ionization (ESI) technology.

The blend of the two, said Smith, “for the first time really allowed us to do biological compounds and ultimately get into proteomics”—that is, the large-scale study of proteins in biological samples.

Starting in the late 1980s and going through the 1990s, the PNNL group made major contributions to the further development of ESI in conjunction with MS.

By the mid-1990s, as part of these efforts, Smith and his group had developed a new capability by coupling capillary electrophoresis with a PNNL-designed Fourier-transform ion cyclotron resonance mass spectrometry (FTICR MS) instrument. It served as a prototype for an 11.5-Tesla magnetic force FTICR MS, then the highest in the world. (Magnetic resonance imaging at your doctor’s office takes place in the 1-to-5 Tesla range.)

PNNL’s role in this area continues to this day. The EMSL operates a 21-Tesla FTICR MS, one of only two in the world operating with such a high magnetic field.

“So we got much better at protein analysis,” he said. “That was the basis of our starting in proteomics, and a few years later, metabolomics.”

Because of PNNL’s emerging ability to comprehensively study complex mixtures of proteins from cells and tissue and blood samples, the lab established large proteomics research programs funded by DOE and by the National Institutes of Health (NIH).

The NIH program, funded in 2003, “is now in its 16th year because of the new technologies it continues to develop,” said Smith.

Today, separations based on ion mobility spectrometry are beginning to have a big impact, so the lab is taking the next step by developing Structures for Lossless Ion Manipulations, or SLIM.

Among other things, SLIM allows ion mobility separations to be done with more resolution, more sensitivity, and more speed than previously possible. In addition, the ions can pass through SLIM without any loss.

“It speeds up and improves enormously any measurements we make over what we could do previously,” said Smith.

SLIM is still being developed, in some cases by making its analysis pathways longer (for better resolution) or more convoluted.

Smith and his team have sent ions more than once through a pathway—in one case, enough times to rack up kilometers of pathway travel, all in a highly compact design.

The team is working on ways to make the technology compact enough to fit in a doctor’s office, said Smith. “We’re taking SLIM in every possible direction you could go.”

SLIM will open new avenues for analytical measurements, said Smith. It will help personalize medicine, for one, and could soon improve analyses needed for environmental management and clean-energy research.

SLIM will eventually be hitched to a technology capable of manipulating and enabling the analysis of very small samples, right down to the single-cell level, “where all the biology happens,” said Smith.

In April 2019, he and his PNNL colleague Tujin Shi attended a National Cancer Institute gathering, a kind of exclusive think tank on the possibilities for doing proteomics at the level of a single cell.

Studying the single cell is increasingly recognized as important for not only understanding the operation of cells, Smith said, but for really pragmatic reasons too. Those include the development of new and more effective biomarker, which are used, for example, in the detection of diseases.

Smith and others are already linking MS to nanodroplet processing in one pot for trace samples (nanoPOTS), a PNNL-developed sample preparation technology. It was invented by senior biological scientist Ying Zhu, an expert in ultrasensitive bioanalysis, and developed with the help of PNNL’s Ryan Kelly and others.

Featured in Nature Communications in 2018, nanoPOTS was the first technology for doing single-cell proteomics.

Combine something like nanoPOTS with really efficient electrospray ionization, said Smith, and the enhanced capability of MS for analyzing tiny biological samples could be spectacular.

PNNL started long ago to pave the way for making the spectacular possible. In 2008, for one, Smith and others patented the Subambient Pressure Ionization with Nanoelectrospray source and interface (SPIN). This low-pressure electrospray technology was five times more efficient than conventional versions.

A decade ago, 1 out of every 1 million molecules in a solution could be electrosprayed and get all the way through to the detector of a mass spectrometer, said Smith. Today, 1 in every 2 molecules can get that far.

He called getting a single-cell sample prepped and sent through an MS pathway a steep challenge, which PNNL is taking on full force.

A single cell “might have something like 50 picograms of protein in it,” said Smith, quantifying the dauntingly small scale required for analyzing single-cell biological samples. “That’s the ultimate frontier.”