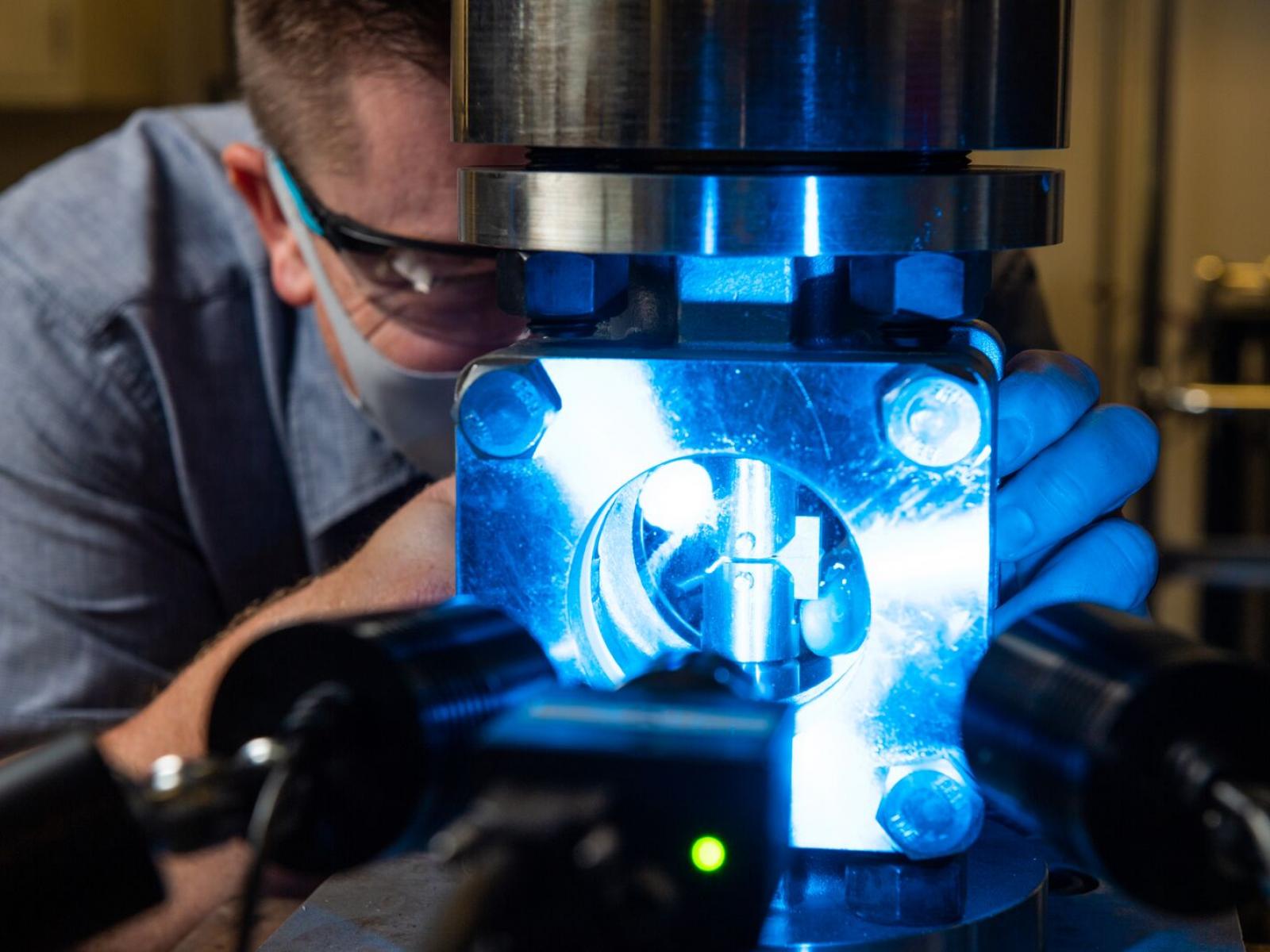 The sight flow vessel is used for in-situ mechanical testing of polymers in low pressure hydrogen. The results from testing in this vessel are being used to evaluate the feasibility of using the existing natural gas pipeline infrastructure to transport hydrogen as a sustainable energy solution.

The energy industry is ramping up production of hydrogen gas as a clean energy alternative. Deployment of cost-effective, reliable infrastructure technologies requires that structural materials are selected to account for the unique stresses that high-pressure hydrogen environments impose.

Rubber seals used in compressors, valves, and hoses, for example, are one of the most common causes of maintenance in hydrogen delivery systems. Mechanical stresses from component operation (e.g., repeated pressure cycles) and hydrogen permeation into rubber materials causes them to deteriorate over time, ultimately requiring seals to be replaced.

The Department of Energy’s (DOE's) Hydrogen and Fuel Cell Technologies Office, through its Hydrogen Materials Compatibility Consortium, or H-Mat, is funding research to examine materials for hydrogen compatibility—materials that perform safely and durably with hydrogen.

In a study performed by researchers from Pacific Northwest National Laboratory (PNNL), Oak Ridge National Laboratory, and Sandia National Laboratories, results showed how a common rubber additive evolves over time when exposed to hydrogen. The additive, a plasticizer used to soften rubber, separated and migrated through the material. And the damage got worse with repeated cycles of exposure and increasing pressure, eventually causing blisters and ridges on the rubber surface.

“We saw no significant blistering or cracking at lower pressures. Higher pressure is where we saw the real damage,” said Kevin Simmons, a PNNL materials scientist who led the research. “The bottom line is to avoid certain rubber ingredients in components that will experience aggressive pressure cycling in hydrogen infrastructure.”

Simmons is a co-leader of H-Mat, comprising researchers from five national laboratories, including PNNL. Through their hydrogen compatibility studies, the consortium aims to the guide development of hydrogen resistant materials that have longer service life in extreme environments. The consortium also supports DOE’s H2@Scale initiative, focused on advancing affordable and clean hydrogen production, transport, storage, and utilization to enable decarbonization of industry and transportation, and unlock revenue potential and value across sectors.

Vulcanization is a curing process that combines rubber compounds with various additives. The choice of additive can improve attributes such as elasticity, strength, viscosity, hardness, and weather resistance. For example, plasticizer can help keep rubber pliable for things such as O-rings and toys. Activators, such as zinc oxide combined with stearic acid and sulfur compounds, can speed up the curing process.

The researchers previously examined the effects of pressurized hydrogen on two types of rubber commonly found in sliding or sealing components used for hydrogen infrastructure. The findings from that study, published in Tribology International, showed that ethylene propylene diene rubber stood up to pressure better than nitrile butadiene rubber (NBR). In the recent study, the team focused on NBR to observe what was driving the damage.

“We had some off-the-shelf samples of NBR but didn’t know anything about their composition,” Simmons said. “We developed a model material with known constituents similar to an off-the-shelf rubber, then studied the model system under continued pressure cycling, looking for changes similar to what we found in the off-the-shelf system.”

Plasticizer migration under the microscope

To examine the rubber at an atomic level, the team used an array of high-powered instruments at the Environmental Molecular Sciences Laboratory, a DOE scientific user facility located at PNNL. First, researchers used a helium ion microscope to take pictures of the rubber samples at 300 micrometers, about the size of a dust mite. Light and dark regions in the images showed changes in the sample surfaces with increasing exposure to pressurized hydrogen.

Next, they used another instrument to identify the chemistry in the different regions. The sensitive instrument, called a time-of-flight secondary ion mass spectrometer, can analyze individual particles as small as 20 micrometers in diameter. That size is about one-fourth the width of a human hair.

“The helium ion microscope is great for showing different chemical species, but it can’t tell you what they are,” said Wenbin Kuang, a PNNL materials scientist and co-author on the study. “The chemical analysis helped us identify exactly what chemical elements we saw in different regions. That’s how we knew it was the plasticizer. Most people didn’t think that hydrogen could lead ingredients in rubber to migrate so dramatically.”

From the first sample under relatively low pressure, around 4,000 psi, fractures and tears began to appear. At around 14,000 psi, ridges and nodules started to form on the surface.

“After 12 cycles, damage began to form on the surface, and after 100 cycles, more and more plasticizer began migrating. Observations after pressure cycling show plasticizer migrating to the surface and damage accumulated over time. It is important to have the right rubber compound to minimize the pressure cycling and hydrogen effects.” said Simmons. “The chemical analysis confirmed that plasticizer was migrating, even at lower pressures.”

Further examination of ultrathin layers of the rubber sample showed voids—like air holes in a slice of bread —around zinc oxide particles.

“When polymers are subject to high pressures of hydrogen as low as 28 MPa, voids can begin to form, and these voids can ultimately grow to cause cracking, which results in the component needing to be taken out of service,” said Kuang.

And again, the number and size of the voids increased with more cycles, expanding the overall size of the rubber sample. Kuang said the results point to the need for new materials or rubber curing mechanisms, perhaps using peroxide instead of sulfur. He is already pursuing a follow up study to explore this possibility.

“Zinc oxide is there for sulfur, while peroxide is an alternative vulcanization method that has no need for zinc oxide,” explained Kuang.

Whether it’s a fueling station, or valves at a production plant, or a metallic tank liner, whatever will be exposed to hydrogen is on H-Mat’s radar.

“By knowing what materials to avoid, we can help industry make better choices for longer component life and reduce costs, agnostic to location,” said Simmons. Hydrogen service environments are more challenging for conventional materials than compressed natural gas systems, and materials damage is a key cause of component downtime and replacement.

The research, “H-Mat hydrogen compatibility of polymers and elastomers,” was published in the International Journal of Hydrogen Energy as part of a special issue from the 8th International Conference on Hydrogen Safety. The special issue, released in March 2021, was "Hydrogen for the global market." Additional researchers in the study included Sarah Burton, Bruce Arey, and Yongsoon Shin from PNNL; Nalini Menon from Sandia National Laboratories; and Bart Smith from Oak Ridge National Laboratory.

The study contributes to DOE’s Hydrogen Energy Earthshot or Hydrogen Shot. Launched in June, the Hydrogen Shot seeks to reduce the cost of clean hydrogen by 80 percent, to one dollar per one kilogram in one decade, and supports the White House’s goal of net-zero carbon emissions by 2050.