Spinning a magnesium alloy as it is pressed through a die to create tubes rods and channels is more energy efficient and actually improves the alloy’s mechanical properties, making them more useful in structural components for vehicles.

A new technology that offers a novel way to manufacture extrusions with unprecedented improvements in material properties recently received a U.S. patent.

“System and Process for Formation of Extrusion Products,” U.S. Patent No. 10,189,063 B2, was issued on January 29 to the development team from Pacific Northwest National Laboratory.

The patent centers around a technology called Shear Assisted Processing and Extrusion—or ShAPE™.   ShAPE™ allows creation of wire, bar, and tubular extrusions that show significant improvement in material properties—for example, magnesium extrusions have been manufactured with unprecedented ductility (how far the material can stretch before it breaks) and energy absorption (how much energy can be absorbed during compression of a tubular extrusion) over conventional methods.

In addition to this granted patent, the ShAPE™ portfolio of pending patents continues to grow, including non-circular extrusions, cladded extrusions, extrusions that join dissimilar materials, and processing for materials that cannot be extruded conventionally, as well as extrusions with significant grain refinement.

The technology is part of PNNL’s growing suite of capabilities in Solid Phase Processing—or SPP, a disruptive approach to metals manufacturing that can be better, cheaper, and greener than  melt-based methods typically associated with metals manufacturing. SPP is poised to provide a distinctive competitive advantage to U.S. manufacturing. 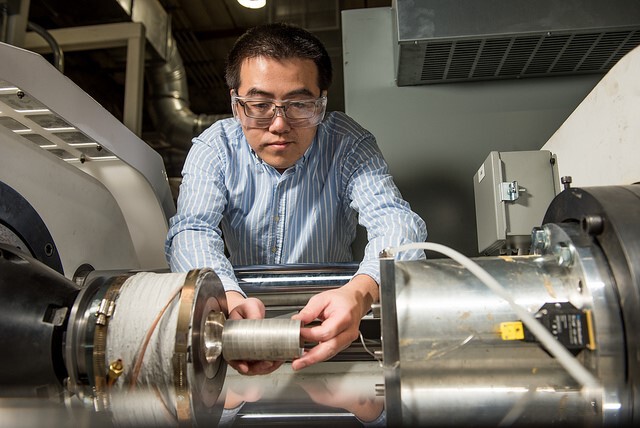 In ShAPE™, a canister holding feedstock material, such as metal powder, flake, or billet, is forced into a rotating die. Frictional heating is generated at the interface between the feedstock material and die, which softens only the material being extruded, eliminating the need for feedstock pre-heating or application of external heat used in conventional extrusion. Spiral grooves on the die face feed the material inward toward the extrusion orifice, which greatly reduces the force required during extrusion.

As an example, using ShAPE™, nanostructured aluminum powder can be extruded directly into round bars using 50 times less force and much lower power consumption than conventional extrusion, while achieving twice the ductility. Costly and time-consuming steps required by conventional powder processing are entirely eliminated.

With an extrusion ratio of 200:1 demonstrated for magnesium, ShAPE™ achieves in a single pass what would take multiple passes with conventional extrusion. The technology enables control over grain refinement and microstructure orientation in extrusions—which is not possible with other extrusion processes. In addition, magnesium extrusions made by ShAPE™ do not require costly rare earth elements to produce extrusions with sufficient ductility and energy absorption for use in some structural automotive applications (e.g., automobile bumpers), allowing more affordability in mass production. 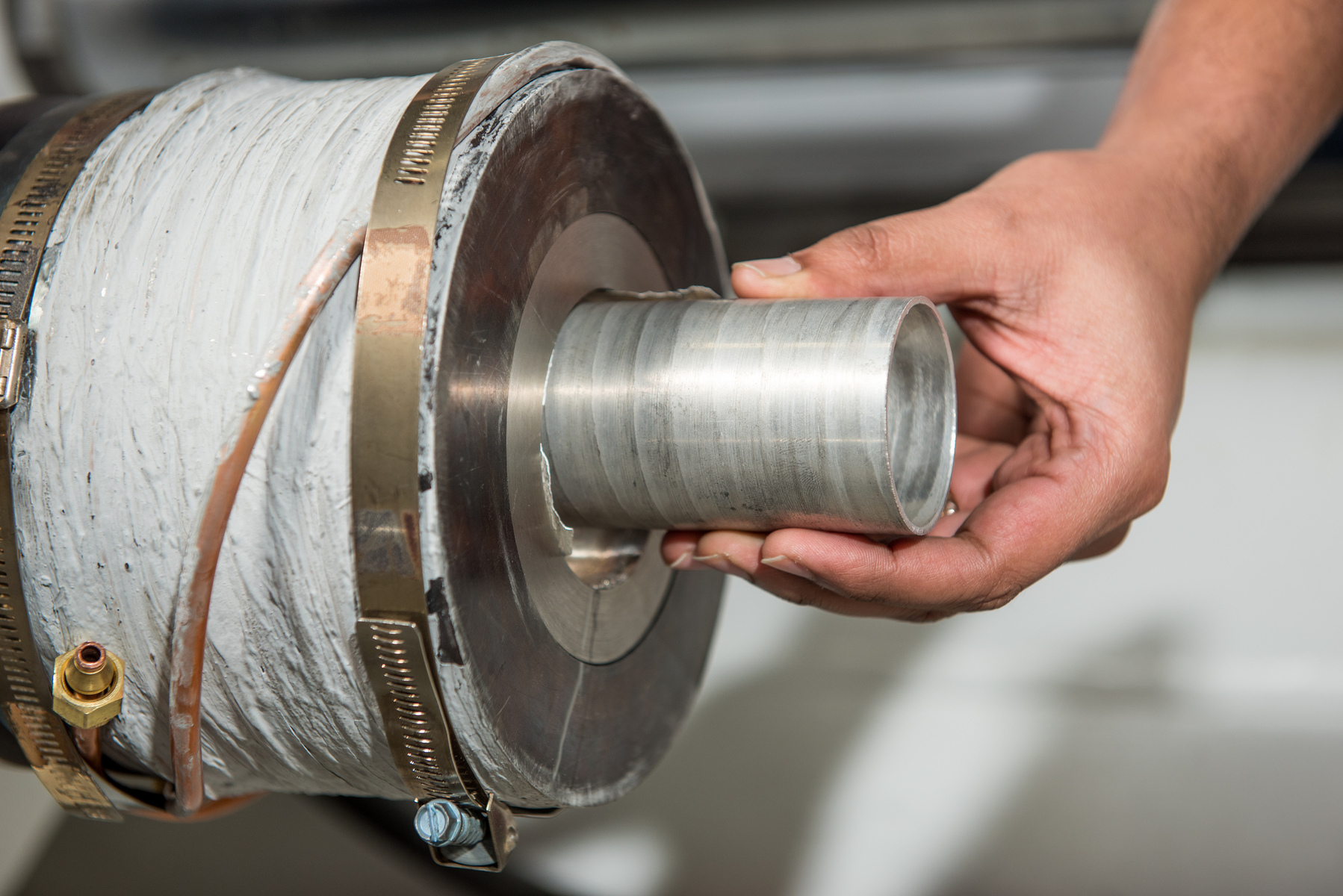 “We see this process as a method to make bulk materials with unique, high-performance internal structures,” said Glenn Grant, a materials scientist on the patent team. “Microstructures like those made by ShAPE™ have been seen in benchtop-scale experiments using a variety of high shear methods. ShAPE™ is a marriage of high shear processing and an industrial-scale process: extrusion. Combining a high shear process with extrusion can finally bring a high level of material performance to industrial-scale products.”

With this technology, further materials innovations can be expected in the automotive, aerospace, oil and gas, electric power, medical, and semiconductor industries, among others.

Early results suggest that ShAPE™ can be a viable method for the production of creep-resistant steels that could be used for heat exchangers in the electric power industry, and high-conductivity copper and advanced magnets for application in electric motors. It has also been used to produce high-strength aluminum rods with application in the aerospace industry. In yet another potential application, ShAPE™ shows promise as a method to produce semiconducting thermoelectric materials.

Much of the research using this technology is funded by DOE’s Vehicle Technologies Office.