The First Map of Switchable Liquids 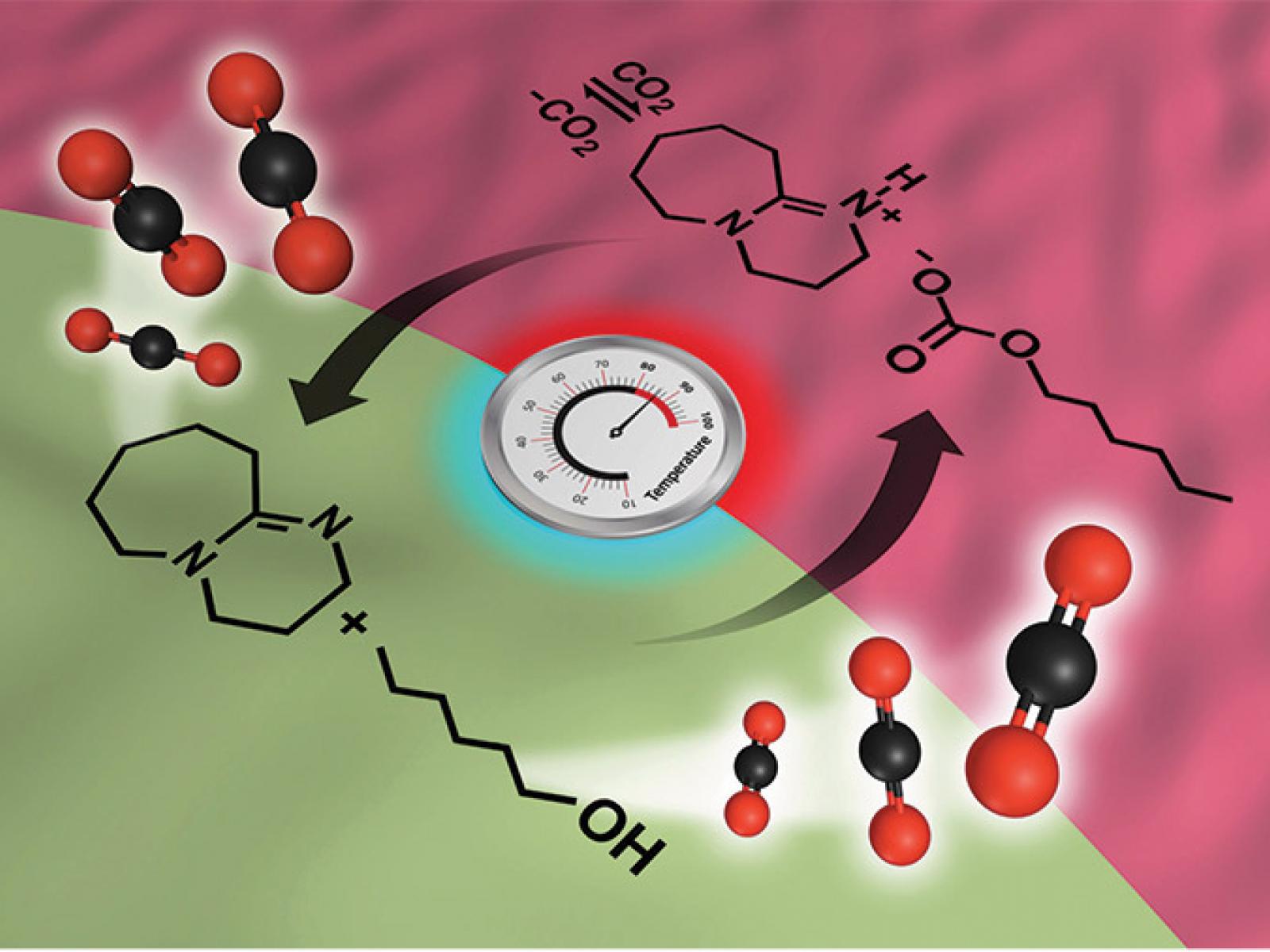 The back cover of Physical Chemistry Chemical Physics shows a stylized view of the distinct regions in the SWIL and how the carbon dioxide moves between the regions based on temperature. Image, designed by Mike Perkins, PNNL, reproduced with permission of PNNL and the Royal Society of Chemistry (see reference).

Imagine building a city with just two types of buildings: red homes and green offices. You spread the buildings out evenly, alternating red and green. Now, imagine that same city with neighborhoods and business districts. The 3-D map would have distinct areas of red and green. Dr. Xiao-Ying Yu at DOE's Pacific Northwest National Laboratory and her colleagues ended up with a similar map when they delved into a popular solvent, known as a switchable ionic liquid, or SWIL. The team drew the first chemical map of a SWIL.

Why It Matters: These switchable liquids capture carbon dioxide, serve as templates for tiny designer particles and extract desirable chemicals from biomass. SWILs are easier to control and produce less waste than conventional techniques. However, scientists didn't know exactly what happened inside the liquid. The team's research offers a detailed map of how SWILs work. The study gives scientists insights to better control existing SWILs and to design new, more effective liquids for green separation. In addition, SWILs may also serve as soft templates for creating extremely small structures.

"It gives us a deeper understanding of what the solvents are doing and how they behave," said Dr. David Heldebrant, a PNNL scientist studying the chemistry of carbon dioxide.

Summary: Used to capture carbon dioxide, synthesize nanoparticles and help turn biomass into biofuels, SWILs are a popular solvent. Sadly, these liquids are difficult to control and improve. Why? The inner workings of the liquids were a mystery. While many thought that SWILs were homogeneous when they were completely loaded with carbon dioxide, the team wasn't convinced. Working with theorists at PNNL, Yu and her colleagues examined computational simulations and calculations that showed distinct regions in the SWILs, even when the chemistry said it should be homogeneous.

The team took a two-pronged approach to drawing up a 3-D chemical map of a SWIL. One involved analyzing the liquid using instruments such as a time-of-flight secondary ion mass spectrometer (SIMS) at DOE's EMSL, a scientific user facility. "We are one of the few groups that can do SIMS analysis of liquids and liquid interfaces," said Yu. "Most places have to dry the sample up or use other bulk approaches. We don't."

Yu along with Juan Yao and Dr. Zihua Zhu analyzed the mass spectrometer data with insights from their synthesis colleagues.

They also conducted a series of experiments that combined the award-winning SALVI technology. SALVI, or System for Analysis at the Liquid Vacuum Interface, allows imaging instruments that require putting the air-sensitive ionic liquid sample under a vacuum to study liquids reacting in real time and in a realistic environment. SALVI, small enough to fit in the palm of a hand, requires as little as two drops of a liquid. The team used SALVI with a chemical dynamic photon beamline at DOE's Advanced Light Source, another scientific user facility. They found supporting evidence of the SWIL components, complementing the SIMS observations.

In analyzing the results from the two approaches and the earlier theoretical study, the team created a 3-D map for the fluid. "This research opened the flood gates," said Dr. Satish K. Nune, a PNNL chemist who worked on the study. "It gave a lot of people new ideas about SWIL chemistry."

What's Next? At PNNL, SWIL research continues to yield new insights. Yu is leading work into using SWILs as a model system for examining solvent structure via SALVI at DOE light sources. Heldebrant is studying how to manipulate SWIL structures to efficiently capture carbon dioxide. Nune is leading efforts on using SWILs to harvest water from air using less energy.