Fast and Hot, Samples Go From PNNL to CERN 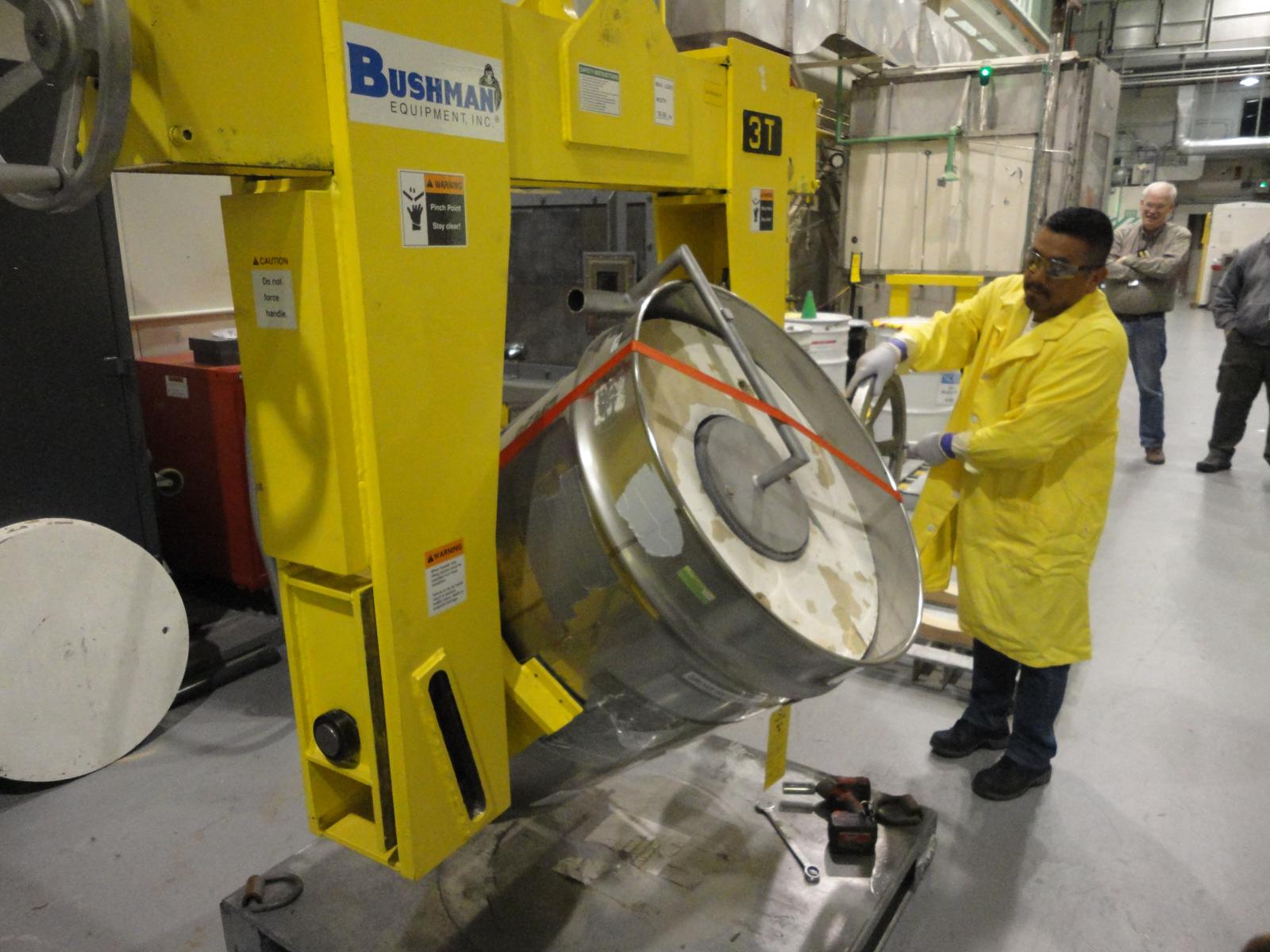 At RPL, a drum of irradiated samples is rotated into a horizontal configuration for subsequent sample transfer to a hot cell.

At RPL, a drum of irradiated samples is rotated into a horizontal configuration for subsequent sample transfer to a hot cell.

One day in September, workers at the Radiochemical Processing Laboratory (RPL) trundled a shielded 110-gallon drum into the back of a specialized shipping truck. Inside were three precisely boxed arrays of proton-irradiated samples, clamped into clamshell enclosures.

Next stop: Seattle, then Paris, then the European Organization for Nuclear Research, known as CERN, located in a suburb of Geneva, Switzerland.

The samples were needed, fast, for a pulsed-beam experiment at High Radiation to Materials (HiRadMat), a CERN user facility. Technicians there test the effects of high-intensity proton and ion beams on materials and accelerator component assemblies.

Such materials and assemblies are intended for high-power proton accelerators, which high energy physicists use to learn more about the basic particles that comprise the universe.

In early September, the window of opportunity for the HiRadMat testing was narrowing quickly. A delayed shipment meant the experiment—jointly designed by CERN and Fermilab—would be pushed back by two or three years, or would not happen at all.

RPL is an applied nuclear science and technology site at Pacific Northwest National Laboratory (PNNL) and one of only two U.S. Department of Energy Office of Science Hazard Category II nuclear facilities.

Multidisciplinary teams of engineers, scientists, and technicians at RPL do research and development work on radiological and nuclear systems. That includes developing processes and solutions for radiological materials important to the environment, nuclear energy, and national security.

One RPL niche is post-irradiation analysis and testing, in part for the Radiation Damage in Accelerator Target Environments (RaDIATE) collaboration, started in 2012 to advance knowledge of nuclear materials and accelerator targets.

Many Samples to Many Collaborators

“The testing we do depends on what the application is and what the sponsor needs,” said David Senor, an expert in irradiation behavior evaluation who oversees all RaDIATE-related projects at PNNL.

In this case, the samples went to CERN. But PNNL sends RaDIATE samples elsewhere, domestically and internationally, so collaborators can proceed with various tests.

For CERN, a First

A CERN technician installs one of the sample arrays shipped from PNNL.

The late-September CERN experiment at HiRadMat was unique, said Senor—the first ever to test previously irradiated materials for thermal shock.

That’s important because high-power proton accelerators operate in a pulsed mode. The beam switches on and off very rapidly, subjecting target and window materials to the stress of potentially very large thermal cycles.

“We need to understand how the materials will respond to that kind of thermal cycling,” he said of the CERN experiment on previously irradiated materials. “It provides very unique, very important data because we suspect the ability of these materials to withstand shock is degraded with irradiation damage. Metals in particular become less ductile to accommodate rapid temperature gradients.”

RPL technicians measure dose rates and contamination levels before taking samples out of a hot cell.

Receiving, extracting, repackaging, and shipping these irradiated samples at RPL—largely within a scant two weeks—illustrates the safety and speed of the facility in the Hanford 300 Area.

“It speaks of our flexibility in operations,” said Senor, and of PNNL’s unique set of capabilities among its sister national laboratories.

Add to that operational flexibility the cleverness that went into designing ad hoc devices for the sample-transfer operation, said PNNL scientist and nuclear technology engineer Andrew Casella. He oversaw day-to-day operations for the project.

“That operational flexibility continues to be developed at RPL,” said Casella. “It specifically allows this laboratory to impact high science.”

Everybody knows the science done at large accelerator facilities like Fermilab and CERN he added. “Here’s an example of what RPL can do to help facilitate that science.”

The CERN experiment wrapped up in late September. “It went very well,” said Senor, along with the RPL steps that preceded it.

“All these people did some pretty outstanding things to make this happen on time,” said Casella.

For one, Orton was the principal interface between PNNL and Brookhaven, where the samples originated as part of the Brookhaven Linac Isotope Producer (BLIP), an experiment RaDIATE started in February of 2017.

The BLIP facility has a proton beam high-energy particle accelerator that irradiates targets to produce isotopes for a variety of purposes, including medical diagnosis and therapy.

Orton “engineered the space” for the sample transfer, said Casella, and designed a capsule-opening contraption that was then built by the crafts facility at PNNL.

Buckendorf coordinated all the steps needed to receive, then send back out, a transnational radiological shipment that required clearance from as many as 10 other organizations and agencies.

“He wrangled all that,” said Senor. “He’s a shipping wizard.”

How They Did It

For shipment to CERN, each box array of samples was sealed into a clamshell enclosure and lowered into a specialized drum. At work here in the yellow lab coat is John Tufford.

RPL wizards of many kinds were ready when the capsules arrived from Brookhaven in mid-July. Some of the capsules, which resemble hockey pucks, contained more than a hundred samples—wafer-like metallic squares about the size of memory cards.

Each sample represents a low dose of radiation and can be briefly held by hand. But when the samples are housed together, the stainless steel sample puck that contains them becomes highly radioactive.

BNL packed the capsules into specialized cans fitted with lanyards and grips so that hot cell technicians could unload them from the shipping drum. Once in the hot cell, each capsule was removed, photographed, and recorded by Casella in order to assure a chain of custody for CERN.

Samples for the overseas experiment came out of the third capsule, which was opened in late August.

By then, Orton’s capsule-opening contraption was in place, Buckendorf was well along in mastering the shipment’s bureaucratic complexities, and the necessary procedures, test instructions, and work authorities had already been outlined—“part of the flexibility we provided here,” said Casella.

There was also a procedure in place so that outside the hot cell each recorded sample could be quickly slipped into a 3D-printed sample holder designed at Fermilab. Each holder has a square window so that a CERN proton beam could be precisely directed at the sample material being tested.

Each sample holder was then slotted into an array box, also fabricated at Fermilab. It was quick to open and close to minimize any radiation dose to workers. Once each array box was filled, it was put into a clamshell enclosure. In all, three array boxes went to CERN for testing.

This coming fall or winter, said Senor, RPL will ship some titanium foils irradiated at Brookhaven. They will be tested small-scale fatigue at the Culham Center for Fusion Energy in Oxfordshire, United Kingdom, another RaDIATE international collaborator.

“We demonstrated what is necessary,” said Casella of such transshipments. “We can do it again, if the project requires it.”

Training the Next Generation of Partner Country Border Security Officials